The families of three graffiti artists killed by a train as they climbed onto the tracks with spray paint cans to ‘leave their mark’ have defended their actions at an inquest into their deaths.

Alberto Fresneda Carrasco, 19, Jack Gilbert and Harrison Scott-Hood, both 23, were killed in the early hours of June 18 on tracks near Loughborough Junction station, south London.

It is believed the trio walked from Brixton at around midnight on June 17 but were hit at 1.16am.

Their bodies were discovered by a train driver around six hours later at 7am.

At the inquest today, their families gave individual and a joint statements defending the art form.

Southwark Coroner’s Court heard Harrison’s family believe there is a ‘stigma’ attached to graffiti despite it being an ‘amazing art form’.

And in a joint statement, the families said the young men were ‘only guilty of their love of painting’ and were just trying to make their mark when they were killed.

The statement said: ‘Eight months ago our sons: Jack Francis Gilbert, Alberto Fresneda and Harrison Scott-Hood, three young men with a love for life, promising futures ahead of them and a passion for art, particularly tagging, tragically lost their lives because of the dangerous risks this art form brings.

‘The ‘painting community’ take their art seriously in trying to find a status. This passion is what brought our boys together.

‘In a time full of needless violence, if our sons were guilty of anything, it was their love for painting.

‘We can only express to young people trying to make their mark, to please be safe. Keep your creativity alive – but don’t risk your lives.’

The statement adds that the families are grateful to the ‘painting community’ for their tributes to the boys.

It read: ‘We are also very grateful to the ‘Painters’ and other artists for their love and tributes that help keep our boys memory alive. May they always Rest In Paint.’

Southwark Coroner’s Court heard when the trio was hit by an eight-carriage train they were creeping along the track ‘trying not to be seen.’

DS Simon Rees from British a Transport Police said: ‘Their first instinct is to conceal themselves. They don’t want to be seen.

‘At that point they would have hidden which in terms of where they are – it would have been to drop down by a wall so they can’t be seen.

‘Unfortunately by that point they have already put themselves in harms way.’

Asked by Alberto’s mother Isabel Carrasco if the trains are lit, DS Rees replied: ‘There are two front lights similar to headlights. But they don’t act as headlights.

‘They are not expecting anything. The lights are more for other trains to see each other.

‘There are lights on the sides but it’s only when it comes around and straightens up [that they would have seen them].

‘You can’t even make out the wall.’

He added: ‘None of the railway is lit up. It’s not designed to be lit up.’

The detective told the coroner there was a 42-second delay registered by a part of the train that comes down onto the electric rail to power the train. 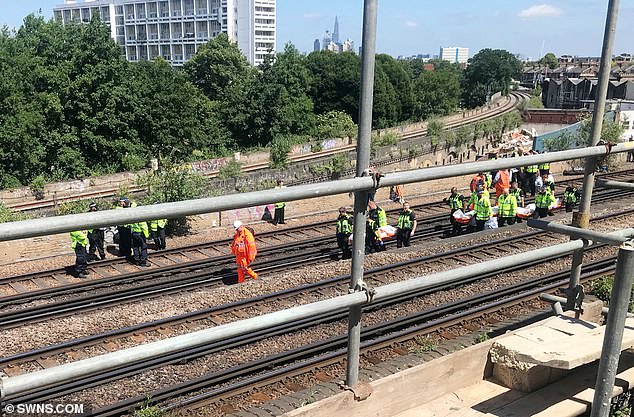 The families of three graffiti artists hit by a train as they climbed onto the tracks with spray paint cans have defended their actions. Pictured: Bodies being brought off the tracks

It was said this would have been the point at which the group were hit as they tried to walk alongside the wall by the train as it came around a corner.

CCTV evidence shows the friends got the tube together earlier on in the evening to Brixton.

They then headed to outdoor market Pop Brixton until it closed at midnight and then walked towards Denmark Hill.

‘They boarded together on the Victoria line at 8.50pm in June 17.

‘And then two of them were seen by a passenger to use black markers on the seats. When challenged they didn’t respond.

‘At 8.50pm they arrived at Brixton underground and walked to the main line station and there was some graffiti put by them on the arches.

‘They were seen there by two others using spray paint but in no way aggressive intimidating or threatening.

‘They then go to Pop Brixton at 10.21pm. This being a small container market with food and drink.

‘They stayed until it closed.’

DS Rees said they were captured on CCTV at 12.02am leaving and again at Brighton Terrace twenty minutes later heading to the railway bridge.

They are then believed to have climbed over wire fences and through undergrowth to access the tracks.

He said: ‘Climbing over fences – obviously they are young men, they are six foot type wire fencing so there’s a degree of difficulty.

‘But if you are determined it’s not insurmountable.

‘The fences weren’t broken down. For a determined person you could get over it.

‘Some areas use palisade fencing which is more substantial. They have spikes on top.’

‘At home when he was relaxing, he was always scribbling away in his art book.

‘His talent was recognised at school when he was picked to paint a mural ironically outside the local train station.

‘He did private art work and was paid to design shop fronts.

‘Painting grounded him and in those last few months, in our family’s darkest days, it was his release.

‘For that I will never condemn my son for what he did.’

She said Jack was a ‘gorgeous, bright, cheeky and inquisitive’ child with ‘endless energy.’ 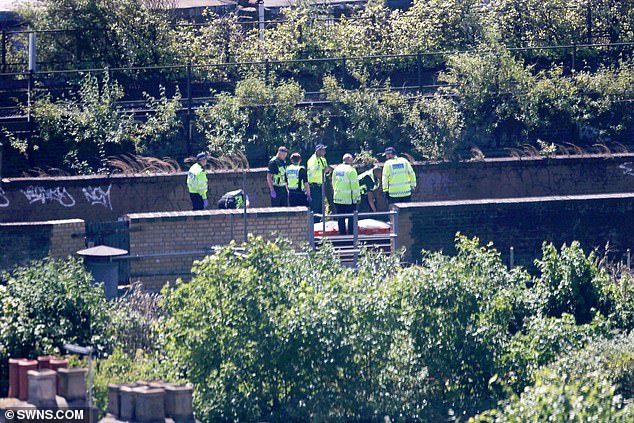 Alberto Fresneda Carrasco, 19, Jack Gilbert and Harrison Scott-Hood, both 23, were killed in the early hours of June 18 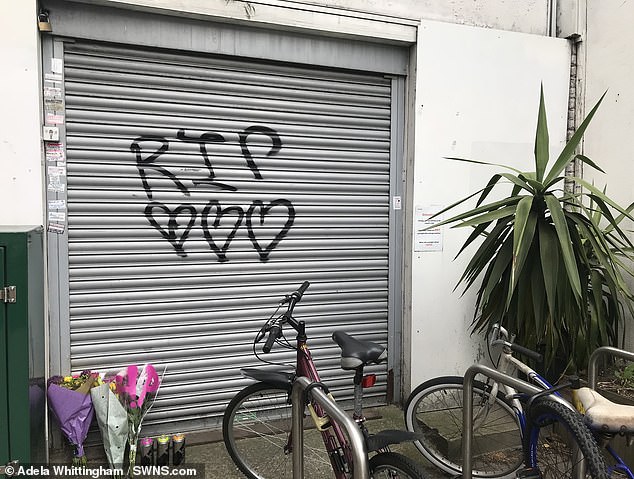 Tributes: Fresh graffiti appeared next to Loughborough Station with three hearts under RIP

He had been working at events as a safety manager, the inquest heard.

The family had suffered a recent bereavement at the time of Jack’s death, Mrs Gilbert told the inquest.

Jack would help his sister with her two children after the death of his brother-in-law in January last year.

Mrs Gilbert said: ‘Losing Jack was the most difficult day of my family’s life. No words can adequately or sufficiently sum up the meaning or value of his short life.

‘To experience the pain and devastation is a nightmare we don’t ever wake up from.

‘It leaves me helpless as a mother to be unable to protect and shield my family from this horror.’

Harrison’s mother Susie Hood also gave evidence about her son to the inquest.

Describing him as a ‘creative, free-spirited young man’ she said over 400 people attended her son’s funeral.

Mrs Hood said: ‘He painted and drew from an early age filling numerous sketch books with his ideas, wrote poetry, recorded music and was a fantastic chef.

‘The Graffiti community do not want to hurt anyone they just want to paint.

‘It is such a dreadful shame it has such a stigma attached to it when it is an amazing art form.

‘We truly believe his legacy will live on.’

Before the inquest broke for lunch, it heard an assessment said fences met Network Rail’s standards a month before the young men’s deaths.

Daniel Matthews from Network Rail said access to the railway tracks around that area were assessed every 12 weeks and they had been carried out around six months prior to the incident.

He added boundary fences, which the three were said to have climbed over to get to the elevated tracks, had met industry standards.

Senior Coroner Andrew Harris asked him: ‘Would it be right that Network Rail monitors the degree of unauthorised access to trans as part of its function?

‘To what extent is this area of track been accessed in the past?’

Mr Matthews replied: ‘The figures we had there was five incidents in a 12 month period leading up to this incident.

‘It is quite low for that part of London. There are certainly other parts of London which are more at risk from unauthorised access.’

He said these incidents related to people walking off platforms and attempting to take their life at the station.

He added: ‘Network Rail inspects all its boundaries. It inspected this area on May 8.

‘All records indicate there was no cause for concern at this location. There boundaries met standards.’

He said although palisade fences were an option that can be used to deter trespassers, they are only being considered for this area now because of a recent spate of fly tipping and padlocks being broken.

He said the area was currently being cleared and fences were expected to be up by the end of March.

Mr Matthews said: ‘It’s one tool in our armoury. We will try to prevent trespassers at that location.

‘It’s inspected every 12 weeks. In the last number of weeks there has been an increase in activity in that location.

‘Padlocks being broken off and fly tipping in third party land. We are now considering what else we can do at that location as a result of that recent activity.

‘I think it’s only been assessed at the moment but there’s an assumption we will be doing those works.’

Evidence at the inquest into the deaths of Carrasco, a Spanish-American born in New York who lived in north London; Hood of Muswell Hill, north London; and Gilbert of Hodderston, Herts; has now concluded and the coroner is expected to give his verdict this afternoon.