Families renting TVs again – now we really ARE back in the 70s!

Runaway inflation, an energy crisis and more national strikes are on the horizon.

With echoes of late 1970s’ Britain, when families rented their TV from shops such as Radio Rentals, there is now increasing interest in hiring goods for the home.

Sitting comfortably?: It was common for families to rent TVs and other electrical appliances in the 1970s

So, does it make financial sense?

THE BOOM IN RENTING ELECTRICAL GOODS

Rental firms were once a staple of the high street, with box-shaped TVs and new-fangled video cassette recorders proudly displayed in shop windows.

These days, the internet is the main showroom for rental companies, though hire shops still have stores dotted around the country that you can visit. And engineers still go to homes to install items such as the TV.

But the range in rented goods has expanded – to include games consoles, laptop computers and high-tech washing machines.

Among the major players is nationwide outfit Hughes Rental which has been in business for more than 100 years. It has seen a 20 per cent leap in demand for major appliances in the past couple of years.

Cameron Henderson, sales adviser at Hughes, says: ‘Rentals are enjoying a renaissance. The market is attracting an increasing number of people who want access to the latest goods, but also want to avoid the expense and worry if something goes wrong. We simply replace the goods if that happens.’

He adds: ‘In these uncertain times, renting can help with budgeting because you avoid big ticket purchase costs. It also appeals as a sustainable option.’

The minimum contract length is typically 12 months and includes cover against breakdowns due to faults or wear and tear. Customers can pay from £2 extra a month for accidental damage as ‘peace of mind’.

The bread-and-butter of the rental market is still the TV. But whereas in the 1970s, a 25-inch telly was the height of big screen indulgence, now it often starts at 50 inches.

This price is comparable with competitors in the rentals market such as Forbes Rentals, Express Appliances and Martin Dawes. As ever, it’s still worth comparing deals with others before signing up.

The rental industry justifies its costs by pointing out that you are covered if something goes wrong and can swap for different items within a contract at any time. It means you are future-proofing as you can exchange for new models.

But debt charity StepChange warns customers not to be dazzled by the weekly price – as it adds up over the year.

COMPARING RENTAL TO COST OF PURCHASE

The price of renting can be less than half the monthly cost you might pay when buying goods interest-free over an 18-month to two-year period. But, of course, you do not get to keep the item.

A top-of- the-range, 48-inch smart TV manufactured by LG might cost about £5 a week through a rental company – just under £22 a month or £260 over a year. You might buy this same TV for £969 at department store John Lewis or purchase it for £53.83 a month on an interest-free deal over 18 months.

But if you are willing to buy goods in instalments of three years or more, then the monthly cost might end up less than if you rented – even if you include interest that must be paid on the purchase. 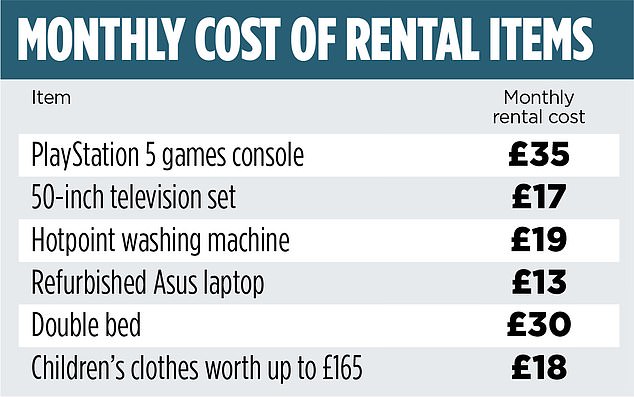 So you should seriously consider buying if you expect to rent for several years. For example, a 7kg Hotpoint washing machine can be rented for about £19 a month.

But with all purchases, there is typically only a one-year manufacturer’s warranty – so a breakdown after this point becomes the responsibility of the owner. A benefit of renting is a breakdown guarantee for as long as you are using it.

It can also end up more expensive buying items through a regular instalment plan, because these tend to tie you in for longer than a typical 12-month period for rentals.

So you can end up paying more because of interest charges – and if you stop payments early, you will still be liable for the full purchase price and may also have to pay interest charges for the whole contract period.

Richard Lane, a director at StepChange, says: ‘Shoppers are often sped through checkouts without noticing all the details of credit being taken on.

‘Be wary of being seduced even by interest-free offers as you are still borrowing money.’

YOU CAN EVEN RENT CLOTHES AND SOFAS

The increased interest in renting electrical goods is having a knock-on effect – with furniture and clothes widely available to rent.

Businesses such as Instant Home are renting out everything from sofas and beds to dining room tables, bookcases and rugs. It says interest is up 70 per cent on pre-Covid levels.

Founder Hollie Wright says: ‘The motivation for many of our customers is a desire to keep their carbon footprint down by avoiding buying more furniture.

‘For those who are tenants and move jobs regularly, it also offers a cost-effective solution for the home.’ Instant Home requires customers to rent at least eight pieces of furniture and hand over a minimum £1,140 in rent over a period of up to two years – so £570 a year.

Furnishings are installed as part of the price. Wear and tear is covered in the cost, but if you badly damage any furniture, you may be asked to buy it.

John Lewis started renting out children’s clothes this year through website The Little Loop. Customers pay from £18 a month to borrow up to £165 worth of clothing – from T-shirts to trousers.

Once finished with the clothing, you simply send back the clothes cleaned. Wear and tear is included within the deal, but if clothes get damaged – a rip rather than merely a lost button – you are contractually obliged to buy it.

John Lewis says it may expand the offer to adults in the near future, something already offered by Moss Bros.

Last year, Moss Bros expanded from renting out formal wear, such as wedding suits, to a £65-a-month online service where you can rent more casual clothes, including suits and shirts.

A maximum of two items are rented at a time, but they can be swapped for others as often as you like. If customers want to keep the clothes they can buy them at a discount.

Moss Bros says the expansion of its rental operations is part of embracing ‘generation rent’.

Renting clothes, it says, also allows customers to be more ecofriendly rather than cluttering up a wardrobe with clothing that may never be worn again.