Families will be able to add two storeys to their home WITHOUT planning permission, under new plans

Families may be able to add two storeys to their home WITHOUT planning permission, under new government reforms

Families will be able to add two storeys to their homes without planning permission under reforms to be unveiled today.

Housing Secretary Robert Jenrick will announce the move in a package of measures tearing up ‘outdated and bureaucratic’ planning laws.

It was originally aimed principally at town centres and would have still required light-touch planning approval.

But under the new plans, families will be able to build up to two storeys using permitted development rights – the same system used for small extensions and loft conversions.

The right will be afforded first to purpose-built blocks of flats, but will eventually be rolled out to all detached properties.

Under the new plans, families will be able to build up to two storeys using permitted development rights – the same system used for small extensions and loft conversions (stock image)

Homeowners will still need to comply with building regulations, but neighbours will not have a formal route to object.

Sajid Javid will today seek to woo rural voters with billions of pounds for roads, broadband and buses.

The Chancellor will promise an ‘infrastructure revolution’ as he sets out the Tory Party’s stall ahead of an expected early general election.

He is set to announce the first projects in a £25billion, five-year road investment strategy, a £5billion package to support broadband roll-out to the hardest-to-reach 20 per cent of the country, and a £220million fund for bus routes.

Mr Javid will pledge that the investment will ‘make the UK a better place to live and work’ adding it will ensure ‘no community is left behind’.

Projects with the go-ahead include upgrades for the trans-Pennine A66 and the A428 between Cambridge and Milton Keynes. Some £20million will go on trials for ‘on demand’ bus services and £30million will improve existing services or replace cut routes.

The move will raise fears of a rash of unsightly developments – but ministers hope it will allow growing families to expand their property without moving, and encourage developers to add new homes to existing buildings.

Mr Jenrick will say: ‘The bold changes to the planning process will make a real difference to people up and down the nation.

‘All too often the planning system proves complicated, outdated and bureaucratic and is too complex and costly for people and small businesses to navigate. This is a barrier to building the homes that we need…

‘I want to give families the freedom they need to expand their homes and ensure small developers get a fair chance to succeed.

‘Our vision for reforming the planning system will speed up and simplify the process, while ensuring that communities still retain a say over their future.’

Ministers will also try to accelerate the conversion of disused and unsightly commercial properties into residential homes.

Under a ‘permission in principle’ system, developers will not have to get detailed planning permission before the bulldozers can move in.

A source said: ‘This will create more attractive and prosperous high streets by replacing eyesores with family homes, while also reducing the need to build houses on green field land and in the countryside.’ 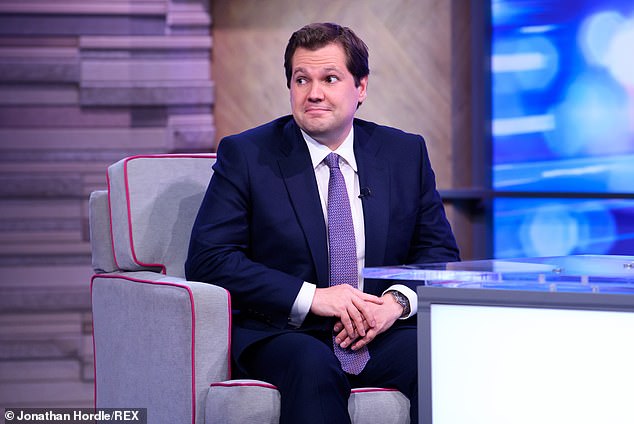 Housing Secretary Robert Jenrick will announce the move in a package of measures tearing up ‘outdated and bureaucratic’ planning laws (pictured: Robert Jenrick appears on ‘Peston’ earlier this month)

Big developers will also be offered the option of a fast-track planning service in return for higher fees.

The package is part of wider moves to boost housebuilding, which is seen as a key battleground for an upcoming election.

However, ministers have dropped plans for new housing to be built on green belt areas close to railway stations.