Families have been left without water for a second night in a row after air trapped in pipes cut off the supply to thousands of homes.

Anglian Water was forced to apologise to customers in four areas of Bedfordshire who are still without water despite the company saying that they had restored supplies to ‘many customers’.

In a statement posted on Twitter, Anglian Water said: ‘Although many customers are now back on water, air trapped in the pipes means that some customers in Leighton Linslade, Pottsgrove, Milton Bryan and Southcott are still without water.

‘We are working hard to fix this, and we will continue through the night until it is resolved.’ 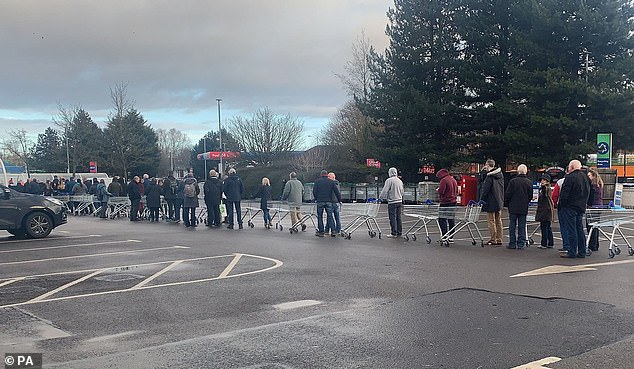 It also said that there was a plan in place to resolve the issue but it would take several hours to complete.

Tankers were photographed heading out to the scene as an estimated 5,000 households are still without water.

Anglian Water went on to add: ‘We know it’s been incredibly frustrating for our customers that timescales have changed over the last two days and not all supplies have been restored at the same time.

‘Our estimates are always given with the best of intentions for returning things to normal, but on this occasion, it has proved an unusually complex issue to resolve, with challenges that could not be predicted emerging along the way…’

‘We are genuinely sorry for the disruption this has caused, rest assured we are doing everything we can to resolve this.’ 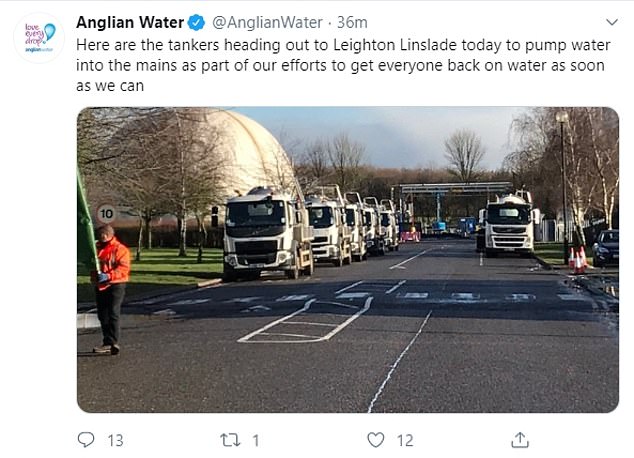 But despite the apologies thousands of customers have taken to social media to express their frustration.

One user, @justynatola, wrote: ‘No water for over 36 hours in Linslade.

‘Over 5,000 households affected and still no answers from @AnglianWater when it’s going to be restored.

‘All we got in the past two days was empty promises. Local MP @AndrewSelous is not responding to residents either.’

Another, @tm029, added: ‘@AnglianWater woken up this morning and still no water.

‘Nothing since 11pm Friday night. Cannot believe it takes so long to get trapped air out of pipes. How much longer?

‘We better get compensation after all this. #stillnowater.’

And the problems have now intensified after residents were forced to queue for 45 minutes for access to free bottled water at the collection point advertised by the company. 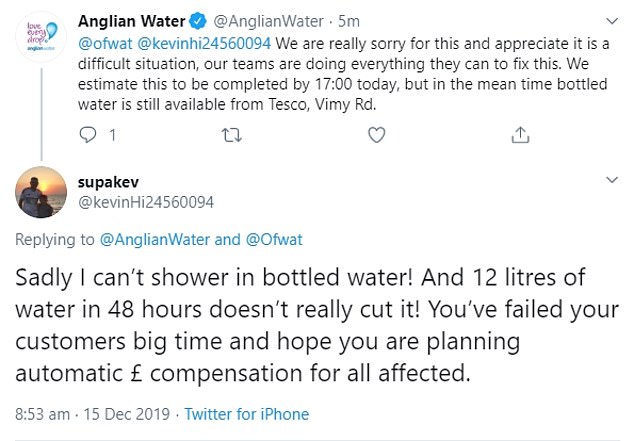 Maria Power was one such customer who faced a delay at the Tesco store on Vimy Road in Leighton Buzzard.

The 34-year-old said: ‘There were probably 50 people in front of me and [the queue] continued growing behind me.

‘The situation is disgraceful it should have been resolved by now.’

‘I’m angry at the water company that they are going to leave people without water for nearly 48 hours.

Another, 39-year-old Dave, added: ‘As I passed [the queue] two friends drove by and called out “we’re off to Milton Keynes for a shower”. It is shocking.

‘Love Every Drop is Anglian Water’s slogan but my cat had the last remaining water I had that was what was left in the kettle.’

‘[The company] has been moving the estimates throughout the weekend.’ 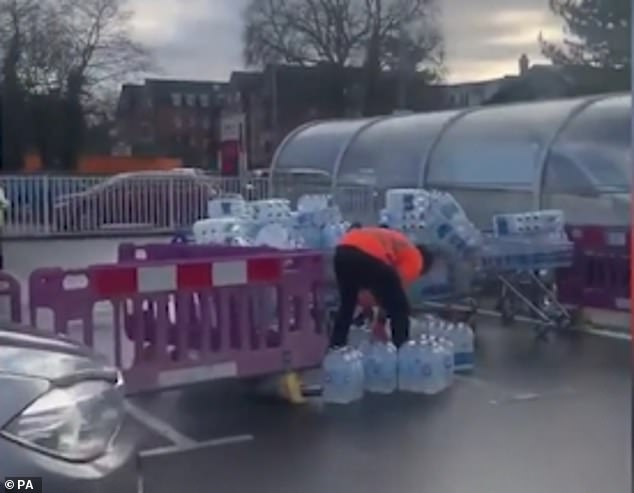 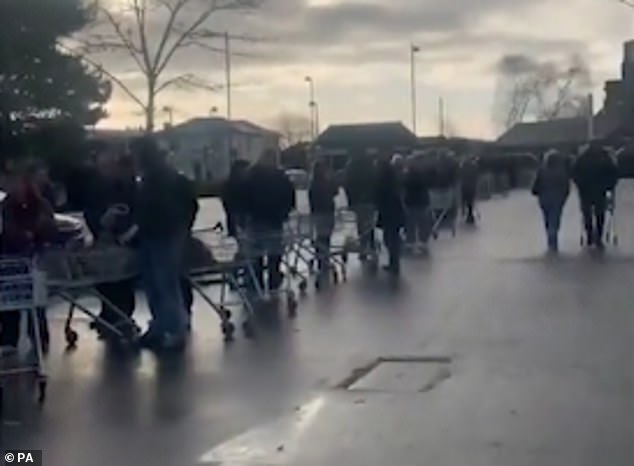 Posts were made on social media by residents suggesting that the Tesco store later ran out of bottled water but MP Andrew Selous said queues have ‘dropped down and everyone got their allocation’.

In a tweet, he added: ‘Tankers now injecting into various parts of the west.

‘Rest of area holding up well. A 5pm restoration still on.

‘Many customers supportive given what a complex issue Anglian Water dealing with.’

The supplier had originally said the problem which began on Friday evening in the area of Leighton Linslade, Bedfordshire, would be fixed by midday on Saturday.

The initial problem was caused by a damaged valve that had resulted in air getting trapped in the pipes.

Issues began with water running yellow and cloudy at around 6pm on Friday before the supply stopped entirely.

One resident, Richard Ayre, said: ‘The main concern is that they are saying it is one valve that has caused the issue.

‘Surely the town and the villages are not all supplied through one pipe.’

The 29-year-old also said that he had not been made aware of Anglian Water’s WaterCare register in place to be able to collected the bottled water being offered.

He added: ‘Otherwise we would have signed up as a relative has just been released from hospital and needs to take in a large amount of fluids.’

It is hoped that the problem will be fixed by this afternoon.