He MUST have nine lives! Family are astonished after pet cat they ‘buried three years ago’ after being told he’d been run over turns up alive on their doorstep

Lauren Fox, 24, from County Durham, has been reunited with her pet cat Sidney after she thought he was dead for three years

A cat made an astonishing return from the dead when he appeared three years after his owners were told he had been run over and killed.

Sharon Fox, 53, and her daughter Lauren, 24, were left distraught when their beloved pet Sidney vanished in March 2016 from Brandon, County Durham.

The pair were devastated when they were told a cat matching Sidney’s appearance had been knocked over and taken to landfill by the council.

But almost three years later Sharon and Lauren received a phone call from a woman who said she’d found Sidney, now six, alive and well, around 12 miles from home.

Lauren, a customer services manager, said: ‘We couldn’t get our heads around it.

‘We had already mourned Sidney. We’d been sent a picture of him laying dead on the side of the road.

‘But this woman was adamant she had him with her. She said: “Have you got a cat called Sidney?” We thought it was a sick joke at first.

‘She said that she’d checked the cat’s microchip and Sidney’s name came up along with my mam’s phone number and address.’ 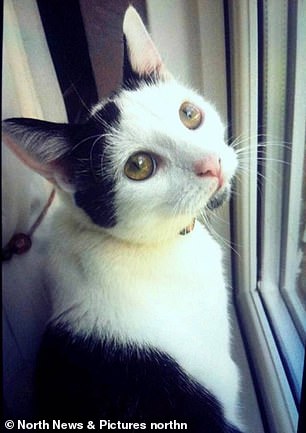 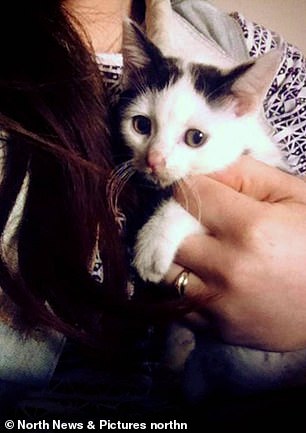 Six-year-old Sidney, left now and right as a kitten, went missing in March 2016 and his owners thought he was dead after they were shown a picture of a similar cat that had been hit by a car

The mum and daughter didn’t believe it was true until they went round to the woman’s house that afternoon and were finally reunited with their long lost pet.

Sharon, a loan advisor, said: ‘The woman, who takes in abandoned and stray cats, had warned us Sidney was a little hostile after living wild.

‘But as soon as he saw me he rolled over onto his back and started crying, wanting a belly rub.

‘There was no doubt this was Sidney and that he remembered us. He still knew his name.

‘We were both completely overwhelmed. We took him straight home and spoiled him rotten.’

When Sidney went missing Sharon and Lauren were contacted by Meadowfield British Legion to say a cat matching his appearance had been knocked over nearby. 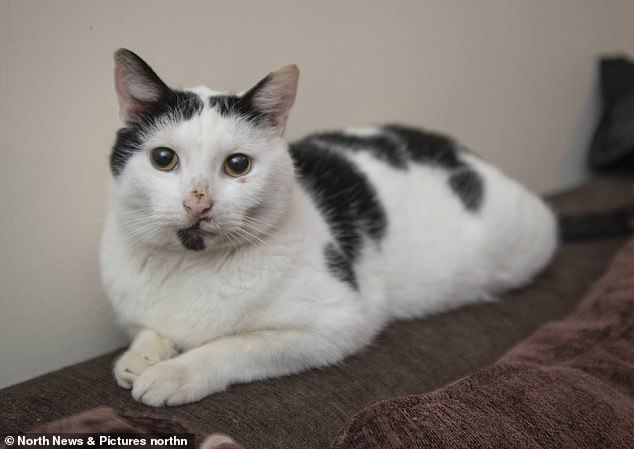 Sharon said Sidney, pictured, ‘rolled over onto his back and started crying, wanting a belly rub’ when they were reunited with him after almost three years

They were even sent a picture of the animal, whose colouring appeared identical to their missing pet’s.

They were then told Sidney had been taken away by a Durham County Council worker who dumped him in landfill without checking his microchip.

Lauren said: ‘It was terrible. We couldn’t even bring his body home and bury him. We were very angry with the council at the time.

However they’re now ‘delighted’ to have Sidney back home with them.

Lauren said: ‘He has lost almost all of his teeth and he has obviously been in fights because he has marks on his head and he had a split lip, which has now healed.

‘We are delighted to have him home. He is getting lots of cuddles and food, and he seems very content. We will never let him out again.’

Lauren and Sharon think Sidney, who was abandoned on a neighbour’s doorstep as a kitten, might have ended up lost after stowing away in a vehicle.

In 2016 Durham County Council apologised for dumping the cat thought to be Sidney without checking the chip.

A spokesperson said: ‘Due to an oversight our usual processes were not followed and we are very sorry.’