A family could have been ‘blown to pieces’ after an ‘old bottle’ they found in their back garden turned out to be a live Second World War bomb.

Ed Cawdell, 43, and his family were clearing out the mysterious concrete structure in his back garden in Quorn, Leicestershire when they found the explosive.

They had dug around in the build to kill time during lockdown when they discovered inside the structure was some kind of shelter or base from the 1940s.

Inside the hideaway, which the family believe was used by the Home Guard, they found old toys, soap, bottle of beer, a jar of pickles, watches, lightbulbs and bottles.

But on Monday, they pulled out what they initially thought was an old oxygen bottle out of the ground – only to realise it was a live 4.2in mortar round. 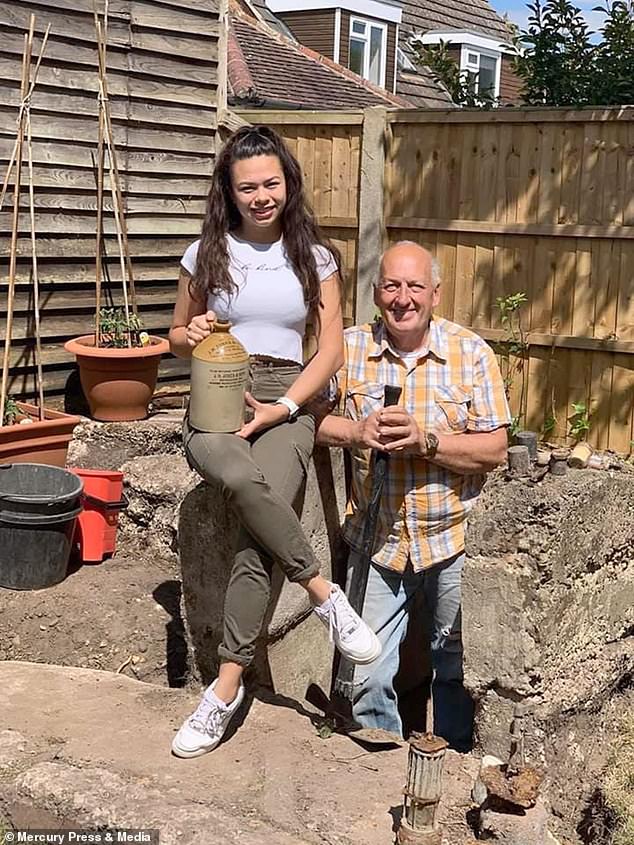 The family believe the explosive was dropped by Germany on the area during WWII.

When bomb disposals experts removed the relic and took it to a nearby defence college, they confirmed the explosive’s safety catch wasn’t on.

Ed’s uncle Peter Cawdell said they had been ‘taking out about 20 buckets of soil per day’ when they found what they thought was an ‘oxygen bottle’.

History enthusiast Mr Cawdell, whose father bought the three-bedroom property 50 years ago, said: ‘We’re shell-shocked there had been something like this in the garden, where we’ve stood, but we found it quite exciting. 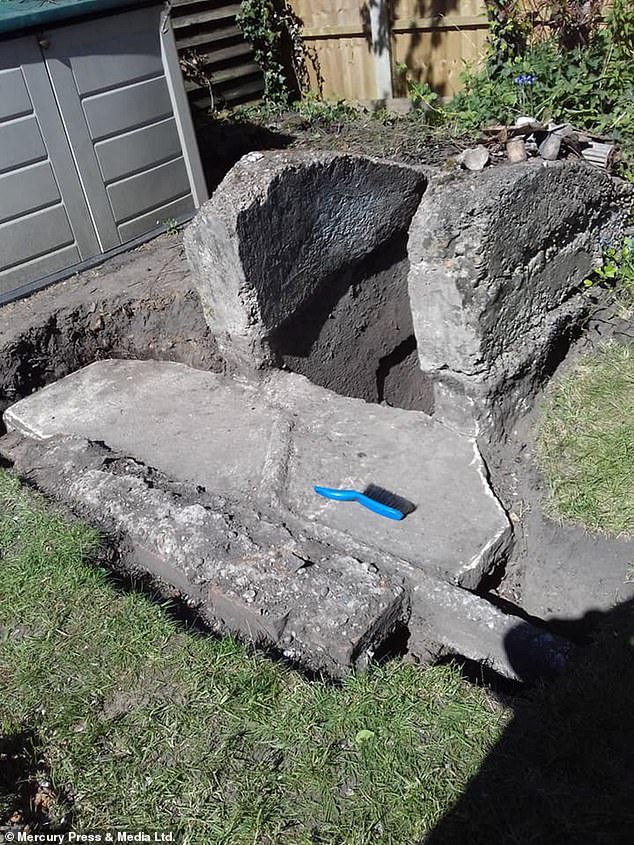 The family were clearing out the mysterious concrete structure in the back garden in Quorn, Leicestershire when they realised inside the build was a wartime shelter or base 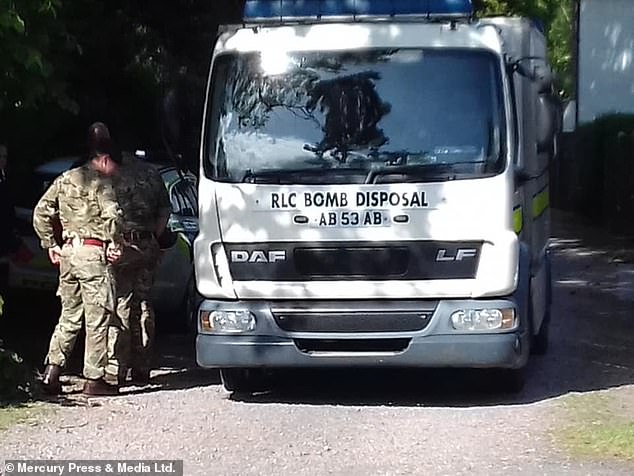 When bomb disposals experts removed the relic and took it to a nearby defence college, they confirmed the bomb was live and its safety catch wasn’t on

‘I do feel lucky as I’ve stood on the spot where we found it before.

‘It could easily have gone off and seriously damaged our properties. If we’d been stood next to it, we would have been blown to pieces. Thank goodness it didn’t.

‘I’m really into history and have been up and down the country looking at World War Two artefacts so when we pulled it out and I had a closer look, I knew it was a bomb.’

Mr Cawdell, who has lived in the house all of his life with his retired project manager dad, was evacuated along with the family’s other immediate neighbour.

‘One of the bomb experts said it was live, the safety catch wasn’t on and it was damaged,’ he said. ‘It wasn’t a hand grenade, it was made to take out a tank. 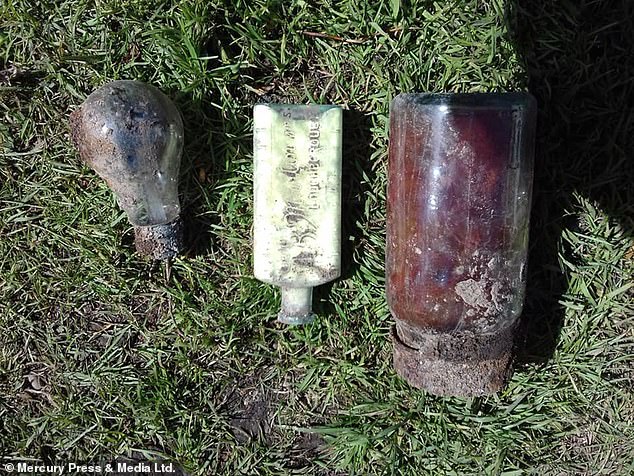 The family believe the hideaway used by the Home Guard during World War Two, which contained lightbulbs, soap bottles and pickle jars (pictured) 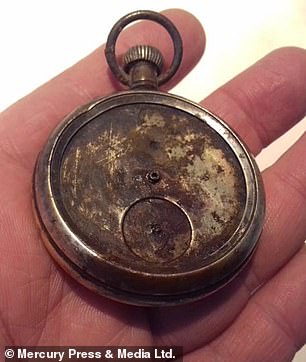 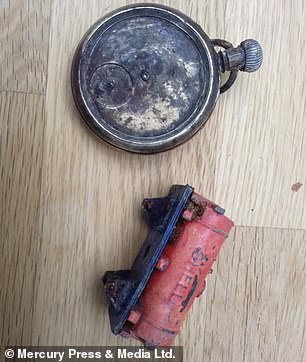 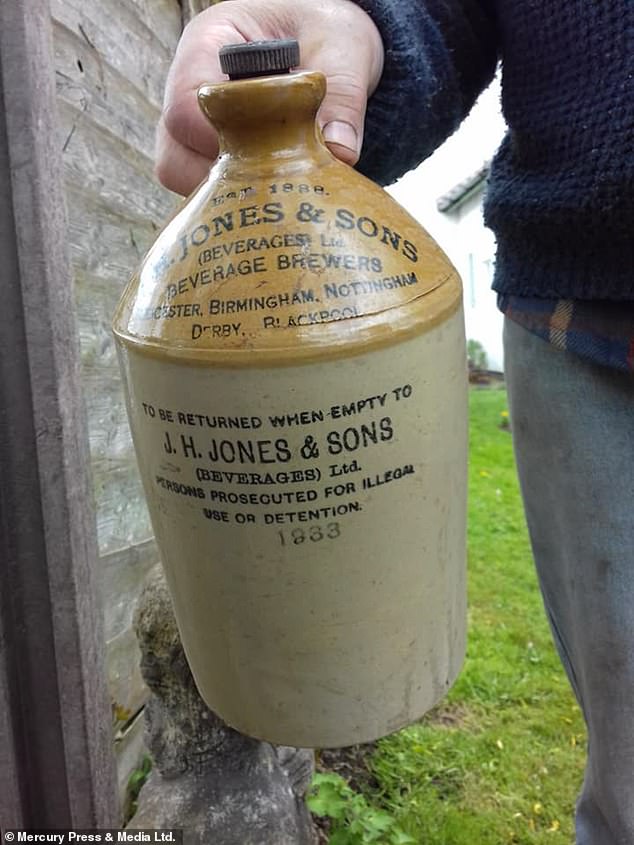 ‘I’m intrigued as to why the shelter was there and sealed up – why would someone seal it up without emptying it first?

‘We think the shelter could have housed the home guard and would have been used to launch an attack against invading Germans. It helped defend the country.’

Leicestershire Police said: ‘We were called at 15.04 BST on Monday to a report of what was thought to be an explosive device in Forest Road, Quorn.

‘The property was cordoned off, but no one was evacuated. Explosive Ordnance Disposal attended the scene.’ 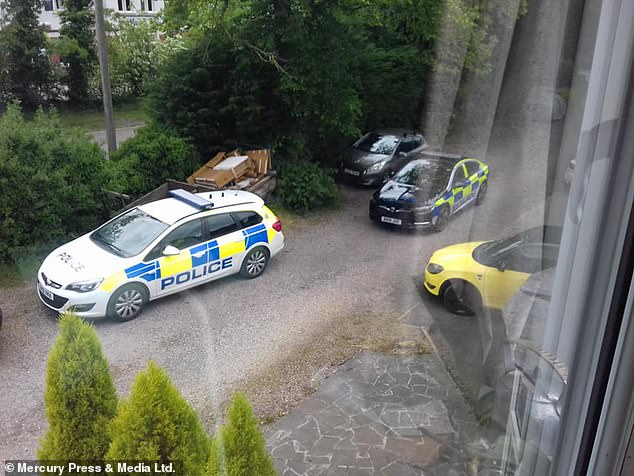 ‘Who do you think you are kidding, Mr Hitler?’: The role of the Home Guard during World War Two

The Home Guard was an armed citizen militia supporting the British Army during the Second World War. Operational from 1940 to 1944, the Home Guard had 1.5million local volunteers otherwise ineligible for military service, like the old and the young and those in the reserves.

Their role was to act as a secondary defence force in case of invasion by Germany and other Axis powers. The Home Guard were to try to slow the advance of the enemy to give the regular troops time to regroup.

A key purpose was to maintain control of the civilian population in the event of an invasion, to forestall panic and to prevent communication routes from being blocked by refugees to free the regular forces to fight the Germans.

The Home Guard was immortalised in the sitcom Dad’s Army, which followed a platoon in the fictional south coast town of Walmington-on-Sea.

Broadcast between 1968 and 1977, it is regarded as having kept the efforts of the Home Guard during the war in the public consciousness.