The wife of a Death Row prisoner wept when Lewis Hamilton said he had read a letter from her husband begging him to use Sunday’s Grand Prix in Bahrain to intervene in his case.

Zeinab Ramadhan, 31, spoke after the British F1 driver said he wanted to ‘digest’ what he had read after being handed correspondence from three inmates when he arrived in the tiny Gulf state for the race.

It followed the seven times world champion’s call last week for more to be done about human rights abuses in countries where motor racing takes place.

Mohammed Ramadhan, pictured with his eldest son Ahmed, right, is on death row in Bahrain after he was accused of killing a police officer with a flare during pro-democracy protests 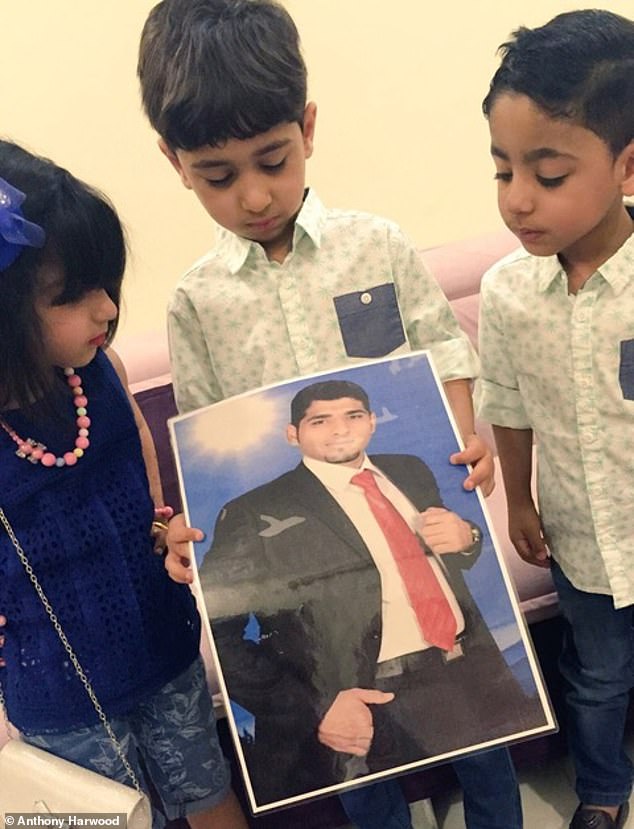 Ramadhan’s children, pictured with a photograph of their father, want Formula 1 World Champion Lewis Hamilton to raise their father’s case while he is in Bahrain this weekend

Due to an overhaul of the F1 calendar caused by the pandemic, the next two Grand Prix races are taking place in Bahrain, a country accused of using ‘sportswashing’ to cover up the torture and executions of political prisoners.

After arriving in Manama on Thursday Hamilton said: ‘It is very important for all sports to use the platform they have to push for change.

‘The human rights issue in so many places we go to is a massive problem. We are one of the few sports that go to so many different countries and I do believe as a sport we need to do more.

‘We have taken a step in the right direction but we can always do more. They have put some steps in places for the places we go to but it is important to make sure they are implemented in the right way and we see some action taken.’

The family of Mohammed Ramadhan, 37, are campaigning for his release after the father-of-three was sentenced to death for the killing of a policeman hit by a flare during pro-democracy protests. 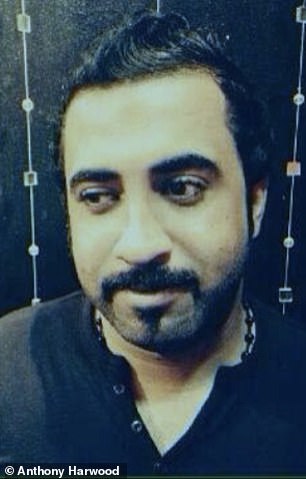 Ramadhan and his friend Husain Moosa, pictured, were both tortured by authorities. Ramadhan refused to confess, but Moosa implicated his friend after being beaten

Human rights campaigners say there is no evidence against the former security guard except for a confession of another man extracted under torture.

Zeinab said: ‘It is an impossible task to explain to my three children that their father might never come home. When Lewis Hamilton said that he had read my husband’s letter, I cried. If he will just say Mohammed’s name, tell the Crown Prince to set him free, maybe our nightmare will finally come to an end.’

On Friday a video was released showing her son Ahmed, ten, flanked by his seven-year-old twin siblings, Zainab and Husain, saying: ‘Lewis Hamilton, you can save our father’s life. Please ask Bahrain to free him so he return back to us.’

Bahrain’s human rights record has plagued F1 ever since the 2011 Grand Prix had to be called off amid a brutal crackdown on protestors who took to the streets during the Arab Spring.

Despite days of beatings Ramadhan refused to confess to the killing, only to be implicated by Moosa who it’s claimed did confess under torture.

In a letter to Hamilton, Ramadhan said: ‘When the regime discovered I had supported Bahrain’s pro-democracy uprising it took revenge against me and framed me in a murder case.

‘I was beaten with iron bars, kicked repeatedly in the testicles and forced to stand until I collapsed.

‘After four days I was left a shadow of my former self, but I never gave them the confession they were seeking. Instead they turned to…Husain Moosa, subjecting him to unspeakable abuses until he implicated me in the alleged crime. From that point, our fate was sealed.

‘Hearing about your human rights campaigning this year has inspired me to reach out. Our government doesn’t care if we live or die, but your voice could help change my country for the better.’

The letter finished with a final appeal to Hamilton, a high profile supporter of the Black Lives Matter movement, saying: ‘After your race this weekend, I urge you to tell your friend the Crown Prince that our lives matter. It could make all the difference’.

Earlier this week 30 cross-party British MPs wrote to F1 CEO Chase Carey insisting he implement a 2015 commitment to respecting human rights in all its operations.

Reprieve spokeswoman Jeed Basyouni said: ‘This weekend, while Bahrain puts on a display for the world, people should remember that this is a country where peaceful protesters are locked up, tortured into making false confessions and sentenced to death.’