An independent autopsy has revealed that the Honduran transgender migrant who died in ICE custody appears to have been abused.

Tennessee-based civil rights attorney Andrew Free released details of an independent autopsy this week that noted deep bruising along Roxsana Hernandez’s ribs that wasn’t evident externally, contusions on her back and injuries around her wrists that were likely caused by handcuffs.

An attorney representing the family claims the 33-year-old did not receive adequate medical care and was physically abused.

The autopsy also concluded that Hernandez likely died as the result of severe dehydration complicated by HIV.

Immigration authorities maintain that Hernandez wasn’t abused while in their custody and any allegations suggesting that she was are false. 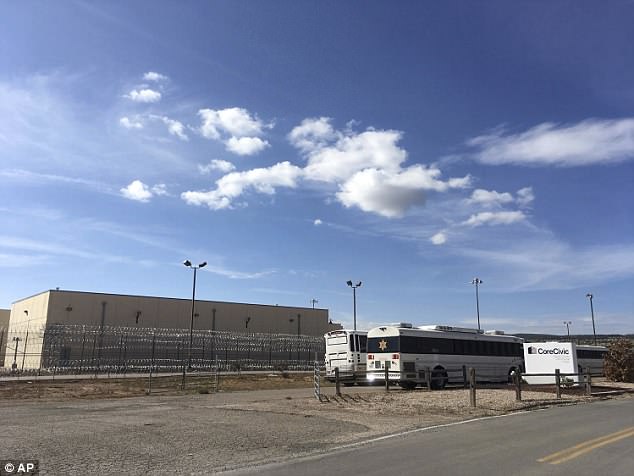 ICE said she was being held in the transgender unit at the Cibola County Detention Center in Milan, New Mexico, when she began suffering from complications related to HIV and died in May

Free is working with the California-based Transgender Law Center to represent Hernandez’s family.

He has filed a notice of intent to sue over her death, saying he has requested documents from various federal agencies about the conditions in which the woman was kept.

‘We will not rest until those responsible for Roxsana’s suffering are held to account, and until the systems of oppression that gave rise to her suffering are abolished.’

Hernandez arrived in the United States in the spring as part of a highly publicized caravan of Central American asylum seekers.

She was taken into custody in San Diego and was later transferred to El Paso, Texas, before being taken to the Cibola County Detention Center in western New Mexico.

The 33-year-old died May 25 at an Albuquerque hospital where she was admitted after showing symptoms of pneumonia, dehydration and complications associated with HIV, federal authorities have said.

An official autopsy was conducted by the New Mexico Office of the Medical Investigator. That report has yet to be completed and released.

The independent autopsy was done by Kris Sperry, a pathologist in Georgia. Sperry made headlines in 2015 when he abruptly quit as that state’s chief medical examiner following an investigation by the Atlanta Journal-Constitution that revealed he had taken on more than 500 private cases as a paid forensic expert while working for the state. 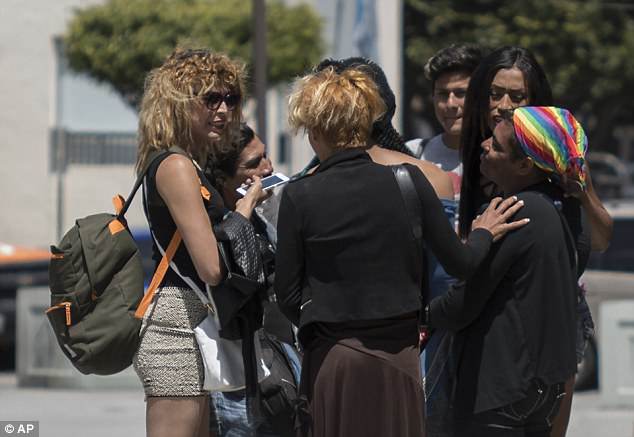 She was the sixth detainee to die in ICE custody since October 2017. Hernandez is seen far left talking with her friends in Tijuana, Mexico in this file photo

A review of Hernandez’s death by ICE medical professionals confirmed that the woman suffered from a history of untreated HIV and that hospital personnel who treated her did not raise any issues of suspected physical abuse.

Advocates say the detention center in Cibola County has the highest number of asylum seekers and the country’s only pod specifically for transgender women. They say government data show LGBTQ immigrants are 97 times more likely to be sexually assaulted than other detainees and that transgender women are often held in prolonged detention and solitary confinement.

Allegra Love, an immigration attorney and executive director of the Santa Fe Dreamers Project, said authorities haven’t provided adequate medical care at Cibola and that she sees medical negligence with each of the group’s clients.

Love said ICE routinely puts transgender women in solitary confinement without due process and for extended periods of time.

The women in the transgender pod have ‘slam-dunk’ asylum cases and shouldn’t be held in detention, she said.

‘All they had to do was keep her alive,’ Love said. ‘We would have gotten Roxsana out. She just needed more time.’ 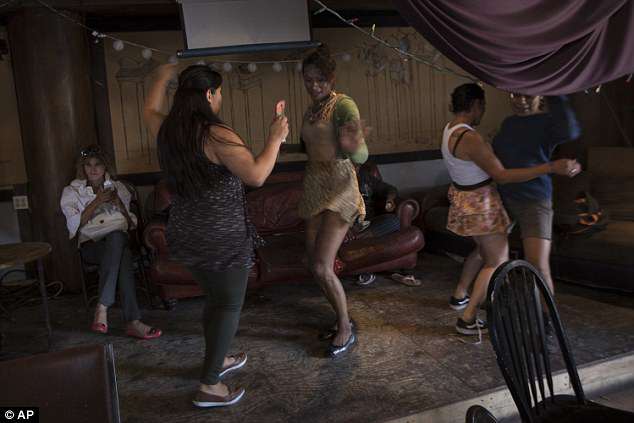 In this file photo, Hernandez, sitting at left, checks her cell phone while her friends dance at the community center called El Caracol, where legal aid was being offered to migrants by volunteer U.S. lawyers, in Tijuana, Mexico