Banksy house sale is back on: Family insist they WILL sell £340,000 house decorated with artist’s ‘Aachoo!’ mural even though it has been valued at £5million

The owners of a Bristol home where a new Banksy mural has appeared insist they will still sell the property, following reports they had pulled out at the 11th hour.

Nick Makin denied claims his mother, Aileen, had decided against exchanging contracts for the £340,000 home, which has been valued at £5 million since the street artist confirmed the ‘Aachoo!’ painting was his.

The family claims they wanted artwork to stay in place and be protected, insisting the sale had merely been put ‘on hold for 48 hours’.

The comic artwork shows a woman wearing a headscarf and holding a handkerchief, bending over while sneezing.

The force of the sneezes causes her to release her walking stick and handbag.

Her dentures are also shown shooting out of her mouth.

Mr Makin admitted the family had to ‘take a moment to think about it’ after the headline-grabbing valuation was revealed, and that his mother has been left distressed by the recent attention.

The piece, entitled ‘Aachoo!!’, was first discovered on the external wall of the semi-detached property on Thursday morning 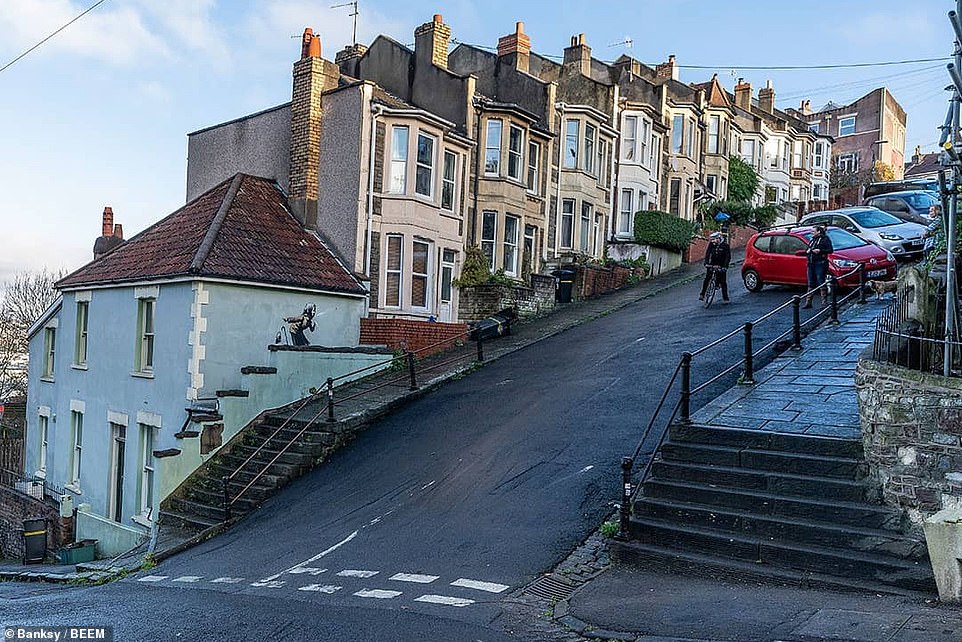 The £300,000 property could see its value skyrocket as Banksy’s work often sell for millions 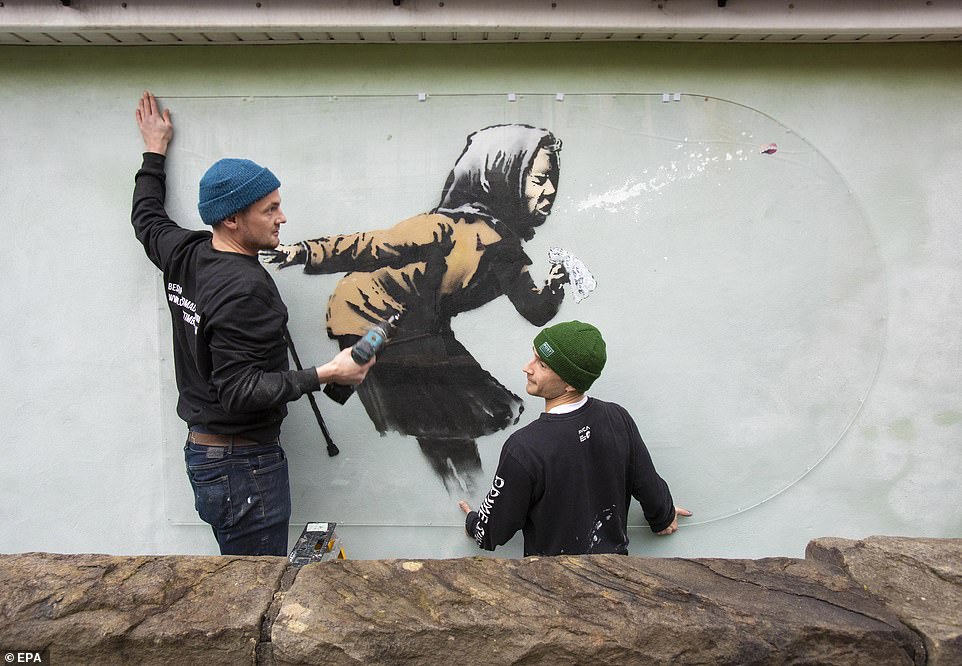 The family have now put perspex over the artwork, which shows a pensioner’s dentures flying out as she sneezes, to protect it 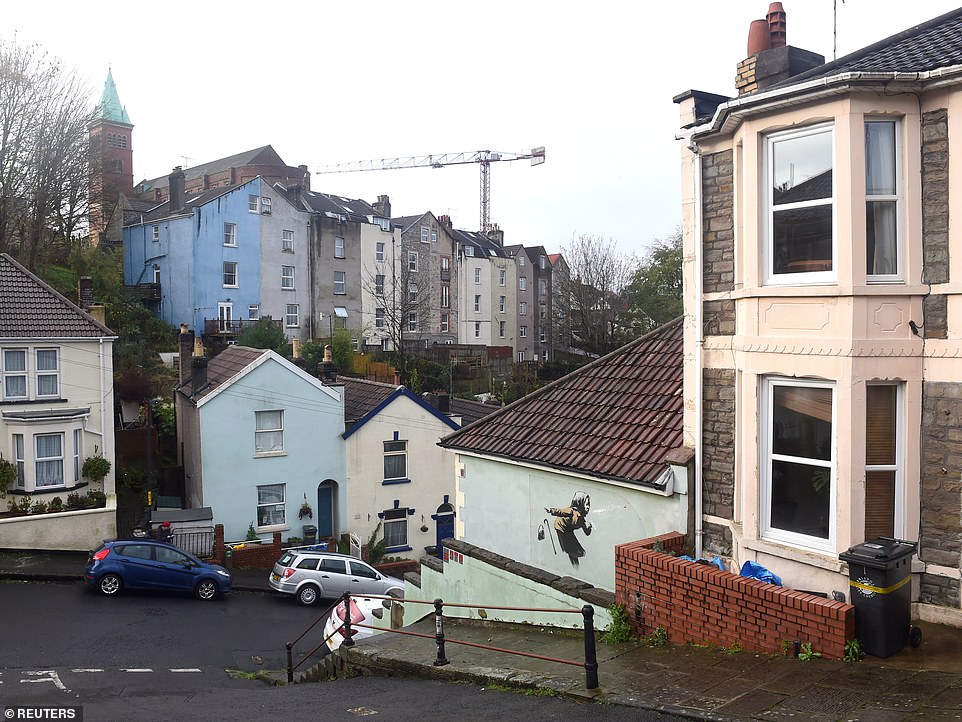 The artwork first appeared on Thursday before Banksy confirmed it was one of his works. Bristol is said to be the hometown of the anonymous artist 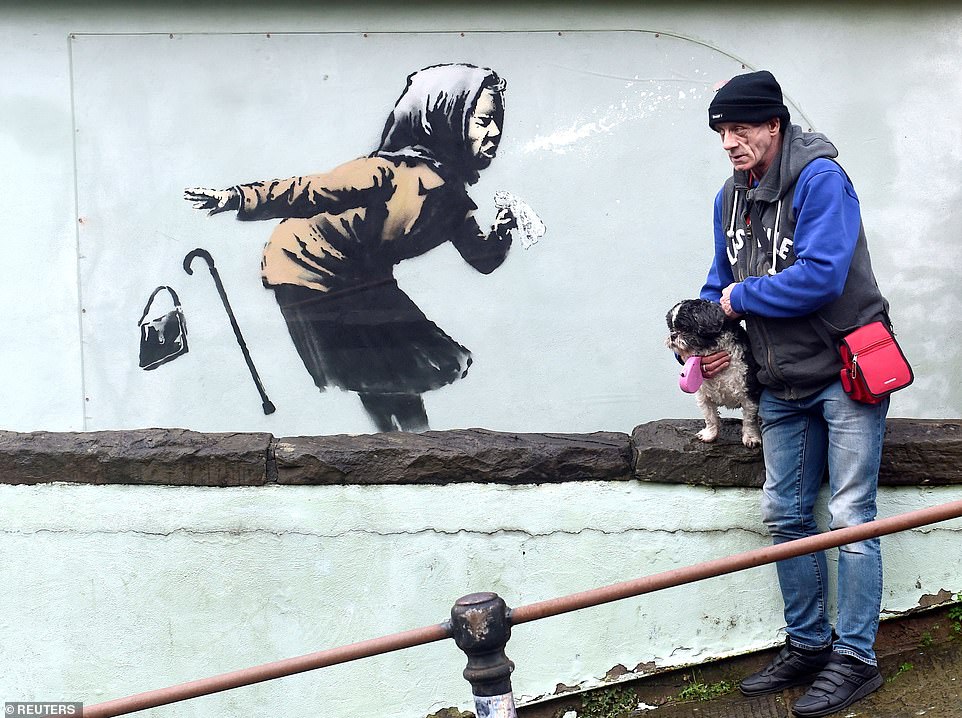 Since the painting has been identified as a Banksy, visitors have flocked to the Totterdown area to have a look at the painting

He also claimed they are now actually worse off financially since it appeared earlier this week.

A piece of clear acrylic has been placed over the mural and an alarm system has been installed to try and protect the artwork.

‘Not only has it not earned us £5m, it’s actually cost us money,’ he told BBC Radio Bristol.

He added that the family was ‘looking at getting a covenant put into the deeds of the house’ to make sure the mural stays where it is.

‘Or if it was to be removed, to be removed to Bristol City Council or the museum, so it can be kept in its condition and safe and in the right hands,’ he said.

In an image released by Banksy, the woman’s sneeze appears to have knocked over a wheelie bin at the next-door property, while a man holding an umbrella is being blown backwards.

Banksy confirmed on his website and Instagram page on Thursday afternoon that the piece is his work.

The piece was painted on the wall of a light blue house, which sits on the end of a row of terraced houses.

Vale Street is said to be the steepest in England, with its 22-degree gradient put to use during annual Easter Sunday egg-rolling competitions.

Banksy was busy during lockdown: The ‘Aachoo!’ mural is not the artist’s first piece with a subtle nod to coronavirus to appear this year 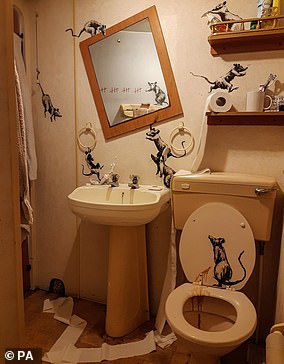 The Bristol ‘Aachoo!’ mural is not the first artwork from Banksy this year.

The elusive street artist kept himself busy during lockdown.

The last six months has seen a number of his trademark tongue-in-cheek artworks pop up across the UK – and many of them made a nod to Covid.

In April, in the peak of the first national lockdown, he posted an Instagram snap of a version of his famous rat designs getting up to no good in a bathroom.

The comical scene showed the rodents knocking the bathroom mirror to one side, hanging on the light pull, swinging on a towel ring and stepping on a tube of toothpaste.

The anonymous artist captioned the picture: ‘My wife hates it when I work from home’.

A month later a new artwork appeared at Southampton general hospital paying tribute to NHS staff during the coronavirus pandemic.

Titled ‘Game Changer,’ the monochrome painting depicted a young boy playing with a toy nurse over other superhero figurines Batman and Spiderman. 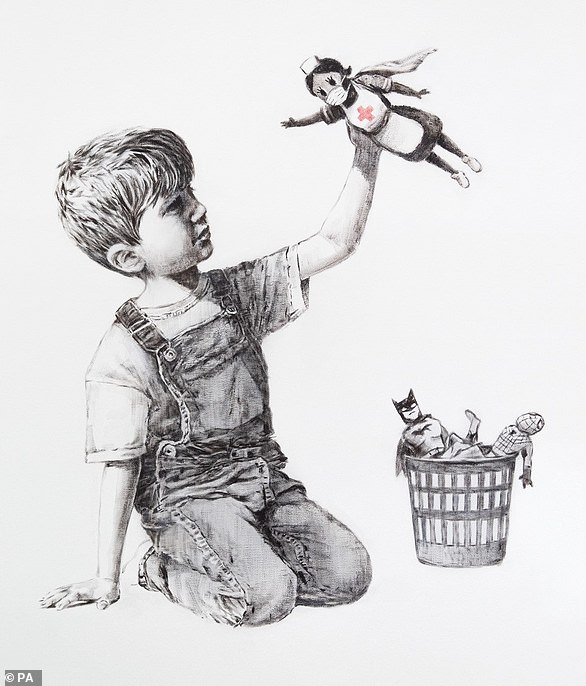 Banksy’s world famous Girl With a Pierced Eardrum painting was also given a coronavirus twist in April.

It depicts a take on Vermeer’s famous Girl with a Pearl Earring, replacing the earring with an outdoor security alarm.

A blue surgical mask was also added to the Bristol mural, although it is not known if this was the artist’s own doing.