Two 19-year-old boys died after accidentally ingesting fentanyl – an opioid 100 times more potent than heroin – in a pill they believed to be Percocet.

Gunnar Bundrick and Jake Morales had been out with friends in Tucson, Arizona, on November 2 before they went home to Bundrick’s to play video games and eat pizza.

At some point in the evening, they each took a pill stamped ‘Percocet’, an opioid painkiller containing oxycodone which has a numbing effect.

However, it transpired it was laced with fentanyl – each pill with enough fentanyl to kill 10 adult males.

The boys were found the next morning; authorities believe they fell asleep and died almost instantly, and had been dead for hours before they were found.

Sadly, it’s a familiar story to millions of families across the US – but this case has gone viral after Bundrick’s aunt, Brandi Bundrick Nishnick, posted a message on Facebook urging teens to wake up to the lethal dangers of playing with opioids.

‘Gunner never had a chance,’ Brandi wrote in the post which has been shared more than 850,000 times.

Tragic: Gunner Bundrick (pictured) and his friend Jake Morales, both 19, died on November 3 after taking a pill labeled ‘Percocet’ that was laced with fentanyl

‘Tell your kids Gunner’s story. Show them his picture. I can’t describe the amount of pain my brother, sister-in-law and Gunner’s sisters are going through- a pain that will NEVER end.’

In the last decade, painkillers became more ubiquitous than ever before.

Prescriptions were dished out at a rate that meant there were enough pills circulating for everyone in America to have their own supply.

Very few patients return and properly dispose of unused pills, rather keeping them in their cabinet in case they need them again.

It means the rate of young people getting hooked on these drugs has rocketed – as has the rate of teens unwittingly overdosing.

States are trying to curb death risks for addicts by making Narcan (an overdose antidote) more accessible in public spaces.

But time and time again, it’s clear that Narcan is important and useful, but not a solution.

As is the case with any crisis, many don’t realize it could ever touch them. Why would you rush to get Narcan in your house if no one in your household goes near drugs?

And, regardless: Narcan is a poor match against large quantities of fentanyl. Even a touch of fentanyl can be lethal. Its effects take hold instantly, and often, silently.

That was the case for Bundrick and Morales.

‘Gunner has no history of drug use, has never been a “problem child”, was a star athlete, wonderful son and brother and was extremely loved in his community,’ Brandi wrote.

‘We don’t know why he decided to take “a pill” that night. The only thing we can assume is that the curiosity of knowing what the “high” is like came into play? Again, we can only assume.’

Detectives are investigating other samples of the pills both boys took.

Results are still pending, but they believe each pill may have contained up to 20 milligrams of fentanyl.

Two milligrams of fentanyl is lethal, according to Oxford Treatment Center, an American Addiction Centers facility.

‘Both went to sleep and never woke up,’ Brandi said, adding: ‘That’s the most positive thing in Gunner’s whole story – that he felt no pain & didn’t suffer. (Although, positive is a generous way of putting it).’

Bundrick’s mother and sisters found them in the morning, tried to perform CPR, but their efforts were futile. 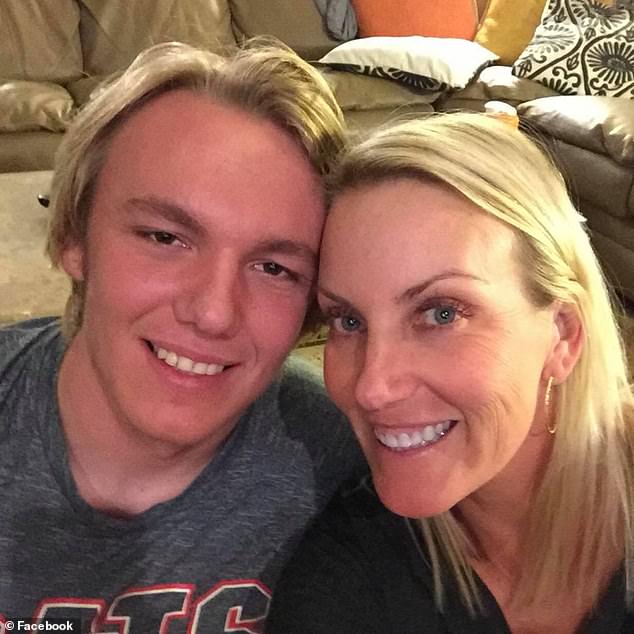 Speaking out: Gunner’s aunt Brandi (pictured together) is urging other parents to share this story with their kids

‘Both boys had been dead for hours and there was nothing they, or the paramedics could do.’

Brandi shared her message on her own Facebook wall, speaking largely to her friends in Tucson and California, urging them to discuss this with their own kids – many of whom are, likely, like Gunner and Jake.

But her words resonated with many more.

‘I’m sharing Gunner’s story because Gunner had a whole life ahead of him,’ Brandi wrote.

‘He had goals and aspirations. He wanted to be a dad. He wanted to continue to play football and baseball in college. He wanted to go hunting and fishing with this grandpa. Gunner wasn’t done.

‘One bad choice, one stupid minor mistake was all it took. Gunner never had a chance.

‘It’s very natural to be curious and want to “experiment” with things at Gunner’s age. Remember when we were in HS and kids considered experimenting with cigarettes?? It’s a different time now. Kids are experimenting with pills because they think they’re safe. They’ve seen them in their parents medicine cabinets from their moms car accident last year or from when their dad threw out his back. They seem harmless.These aren’t the pills in your parents medicine cabinet. They are made in someone’s garage who is trying to make a buck…a buck at the expense of our children’s lives.

‘THERE CAN BE NO EXPERIMENTING. None.

‘Tell your kids Gunner’s story. Show them his picture. I can’t describe the amount of pain my brother, sister-in-law and Gunner’s sisters are going through- a pain that will NEVER end. A hole that will NEVER be filled. A life that will never be brought back. A beautiful life.’