Family of childless widow, 78, are locked in fight over her fortune after she changed will

The family of a childless widow are locked in a ‘fight to the death’ over her £825,000 fortune amid claims she was ‘stitched up’ into leaving her estate to her brother.

Shirley Guymer, 78, died in 2016 but changed her will two months earlier meaning her Hampshire home was left to Terry Crook and his sons Malcolm and Andrew.

Previously the pensioner’s will split 95 per cent of her estate between her 11 nieces and nephews, the children of all five of her siblings.

Now Mrs Guymer’s sister Diane Stoner, 77, and niece Karen Reeve, 51, are accusing Mr Crook and his sons of ‘stitching up an old lady’ with the ‘shocking’ change.

Shirley Guymer, 78, died in 2016 but changed her will two months earlier so her Hampshire home was left to brother Terry Crook and his sons Malcolm and Andrew (pictured left to right). Her sister Diane Stoner and niece are claiming the men ‘coerced’ her into making a change

The women claim the three men guided Mrs Guymer’s hand as she left the £645,000 house, on Butser Hill near Petersfield, that made up the bulk of her estate, to his side of the family.

That will, which she signed in hospital, trumped a previous which split the estate and meant the other family members would not inherit a share of Mrs Guymer’s estate.

Now the women say the cancer-stricken pensioner was ‘bullied and coerced’ by Mr Crook and his ‘clan’ into changing her will just two months before she died.

But Mr Crook, Andrew and Malcolm insist the last will is valid and that ‘stubborn and strong’ Shirley, a former nurse, knew her own mind when she signed it in hospital.

The men and women are now facing each other across court in what Judge Robin Hollington QC called ‘a fight to the death’ over the widow’s £850,000 will and ownership of the house.

The court heard Mrs Guymer spent her working life as a nurse at Queen Alexandra Hospital, Portsmouth, and lived with her dockyard electrician husband Bernard at the Butser Hill house from 1972. 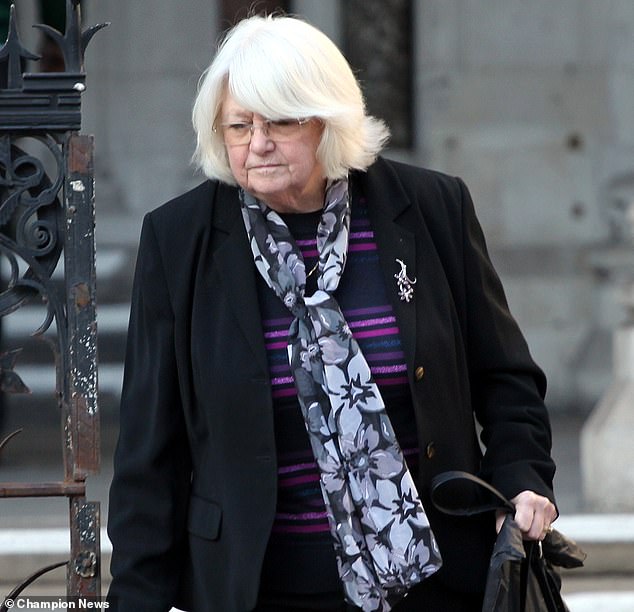 Mrs Guymer’s will originally said 95 per cent of her estate would be split between her 11 nieces and nephews, the children of all five of her siblings (pictured is her sister Diane Stoner, 77)

The land on which the house stood had been bought by Mr Crook and he lived next-door to his sister and brother-in-law after handing over part of the plot to them.

The couple did not have children and, after Bernard’s death in 2014, Mrs Guymer wrote a will, splitting almost everything equally between her nieces and nephews.

However two months before her death two new documents were signed, first handing over part of her land to Mr Crook and the next a new will completely different to her previous one.

The rest of her fortune, which amounted to about £180,000 in cash and investments, was split in various amounts between her five siblings and their children.

Challenging the 2016 will, barrister Julian Sidoli claimed that Mrs Guymer did not have the mental capacity to understand what she was doing when she signed it.

Mrs Guymer’s new will, which she signed in hospital, stated her brother Terry would get 50 per cent of the house and his two sons 25 per cent each. The rest of her fortune was split between the rest of the family (pictured left her nephew Malcolm Crook and right niece Karen Reeve)

He claimed the will – signed in a hospital waiting room – was ‘procured by undue influence’ of the three men and it was Malcolm who was the driving force behind it to ensure the house stayed on Mr Crook’s side of the family.

‘Between you and the rest of your clan, you stitched up an old lady,’ Mr Sidoli put to Mr Crook in the witness box.

‘She lacked knowledge of the 2016 will, she lacked capacity to make it in the first place, she was bullied and coerced by you and your family. The 2016 will is Malcolm’s will, not Shirley’s.’

Denying all the accusations, Mr Crook branded them ‘rubbish’. His sister had simply changed her mind, knowing that she was terminally ill, he claimed.

Carol Davies, for Mr Crook and the brothers, said Mrs Guymer’s own GP thought she was well enough to make the will and that her change of heart could easily be explained by the fact that the house was originally owned by Mr Crook and she wanted it to revert back to him on her death. 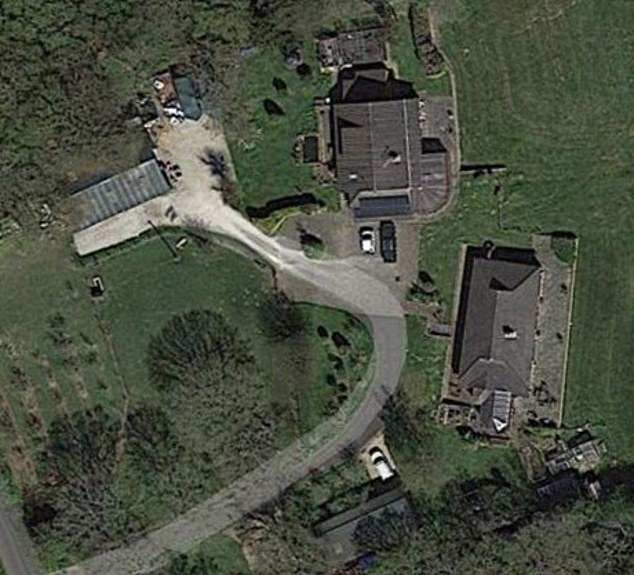 Brother and sister Mr Crook and Mrs Guymer lived side by side on Butser Hill (pictured the two houses). Mr Crook bought the land on which the homes stood and handed over part of the plot to his sister and her husband. Mrs Guymer lived at the address from 1972

‘The purported allegations are in reality ‘mud-slinging’ with attempts to cast aspersions on the defendants with implications that they unduly influenced the deceased,’ she said.

‘There is nothing credible in the claimants’ case or evidence to support any findings of undue influence by any of the defendants, their wives or family or others, by inference or otherwise.’

Giving evidence, Malcolm denied any wrongdoing and said his aunt Shirley had been like a ‘second mum’ to him.

He and his brother had grown up next to her on Butser Hill and she referred to them as her ‘sons of Butser,’ he claimed.

But Mr Sidoli claimed Malcolm had ‘actively participated’ in the making of the new will in January 2016, going beyond ‘merely helping’ his increasingly vulnerable aunt.

‘It appears it is Malcolm giving the instructions,’ he told the judge. ‘He is not acting as a conduit….she is a passive passenger.’

The court heard Mrs Stoner’s and Karen’s case is supported by all of the family, except Mr Crook, Andrew, Malcolm and their immediate family.

Mrs Stoner told the court she would get nothing if the 2016 will is overturned, but is still fighting against it.

‘I’m not happy because my sister told us all that she had left it to her nieces and nephews and they were all aware of it,’ she said.

‘The disappointment was acute for them and the whole family. I’m not here for myself. It’s more of a moral issue.’

Her sister, Dee Parker, who is also supporting the case, told the judge that Mr Crook had constantly ‘controlled and belittled’ Mrs Guymer.

‘She didn’t hate him. She loved him, but she was frightened of him. I don’t hate him,’ she added. ‘But I am ashamed of him.’

Karen, who is Mrs Stoner’s daughter, said her aunt had never had ‘much regard’ for Mr Crook.

‘She always said “Terry is not having my land”. Then suddenly to have a will written in favour of Terry was shocking,’ she said.

‘I personally am not interested in receiving money, but I was shocked at the turnaround, and the change.’

If the two women win and the 2016 will is torn up, the £645,000 house will fall into the pot to be divided amongst all 11 nieces and nephews under the previous will.

If they lose, Mr Crook and his sons will inherit it. The case continues.