Two dismembered bodies found stuffed inside a suitcase in Seattle by teenagers making a TikTok video have been identified as a mother-of-four and her boyfriend.

Now their families are raising money to offer as a reward for information leading to their killer’s arrest.

The bodies of Jessica Lewis, 35, and Austin ‘Cash’ Wenner, 27, were discovered on Seattle’s Alki Beach on June 19.

The TikTok users who found the suitcases containing the victims’ dismembered bodies alerted the authorities and posted video online. 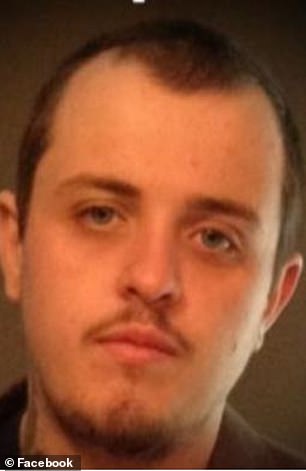 The human remains that were found by TikTok users in Seattle last month have been identified as belonging to Jessica Lewis, 35 (left), and her boyfriend, Austin ‘Cash’ Wenner, 27 (right)

The King County Medical Examiner has since determined that both Lewis and Wenner had been shot several days before their remains were found, reported KIRO7.

‘Something traumatic happened that changed my life,’ TikTok user UghHenry wrote in the caption of the video.

The social media user used the hashtags ‘crime’ and ‘murder’.

‘We found this black suitcase. We were joking that maybe the suitcase would have money…[But] the smell was overwhelming,’ the video captions explain.

In the clip the amateur videographer is heard tell one girl: ‘Open it! It stinks, yo.’ 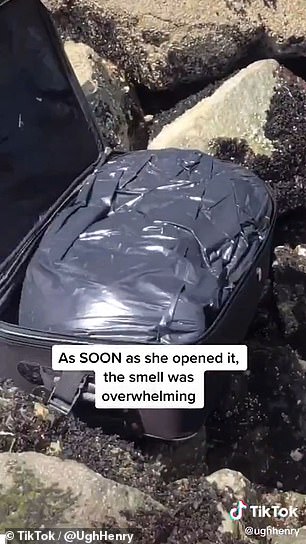 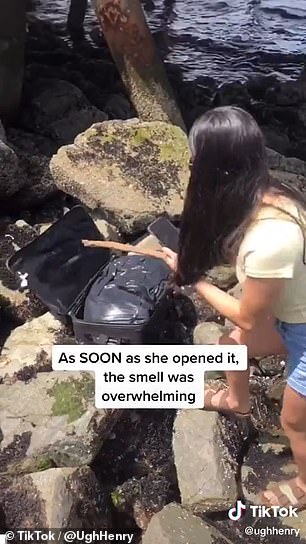 A TikTok video posted last month shows a group of youths opening a suitcase at Duwamish Head in Seattle, Washington. But they had no idea they’d discovered human remains 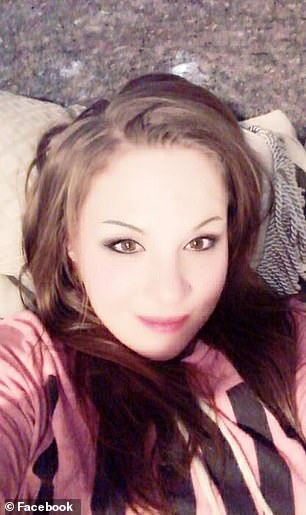 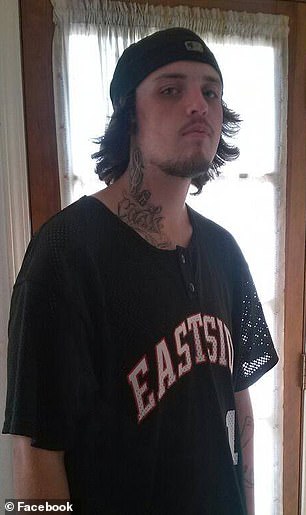 Lewis’ aunt has described the slain woman as a kind-hearted mother-of-four who worked with developmentally disabled adults. She and Wenner had been together for eight years 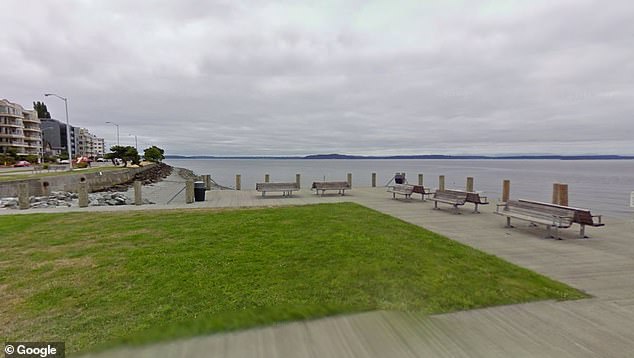 The discovery was near Luna Park on June 19, according to the Seattle Police Department

They are heard laughing before realizing that a black bag stuffed inside the suitcase may contain something sinister.

The caption states they felt a ‘little scared’ and ‘nervous’.

The clip then cuts to another girl calling 911 and authorities arriving at the scene on the 1100 block of Alki Avenue.

According to the description of a GoFundMe campaign that Lewis’ aunt, Gina Jaschke, launched this week, her niece was shot multiple times, while her long-time boyfriend, Wenner, died from a single gunshot wound to the torso on June 16.

‘Jessica & Cash were good -hearted people,’ Jaschke wrote. ‘She leaves behind 4 beautiful children. Their parents and family are heartbroken beyond words. Along with countless friends and loved ones.’

Jaschke started the online fundraiser on Monday in hopes of raising $10,000 for a reward leading to the arrest and conviction of the person or people who killed Lewis and Wenner.

So far, the campaign has drawn just a couple dozen donations totaling $730.

‘She was like the most caring person,’ Jaschke told the station of her slain niece, who worked with developmentally disabled adults.

Jaschke said that Lewis and Wenner were a fun-loving couple who had been together for eight years. The 35-year-old woman leaves behind four children.

‘They were just nice normal people,’ she said. ‘Nobody deserves what happened to them.’

Seattle police told KING5 the case remains under ‘very active investigation,’ but no arrests have been announced as of Wednesday afternoon. 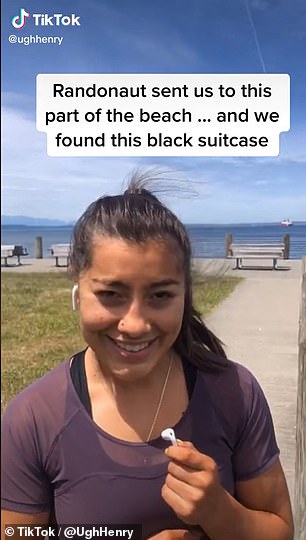 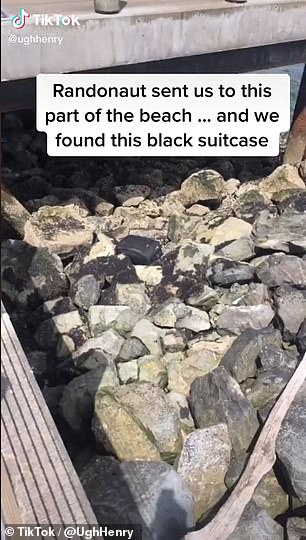 TikTok users said they were sent to the area by an app that comes up with random coordinates. Then they spotted the suitcase 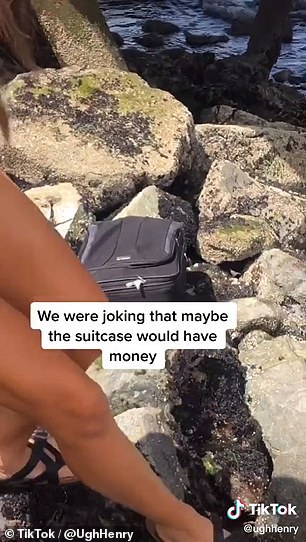 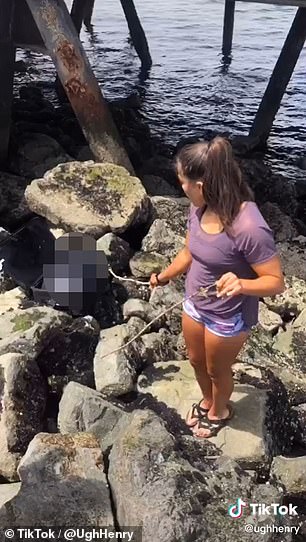 The young people were hoping the luggage would contain money. One girl is seen prodding it with sticks (right) 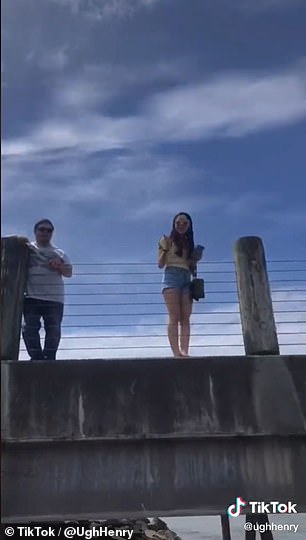 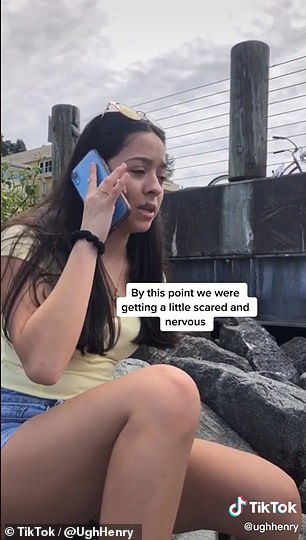 But the group sensed something was wrong after smelling what was inside. They called 911 and felt ‘nervous’ and ‘scared’

According to a caption in the TikTok video documenting the gruesome discovery of the couple’s bodies, the amateur videographers were directed to the rocky beach by the Randonautica app.

The app encourages people to explore areas around them by using a random number generator to come up with a set of coordinates, according to Wired.

Users are told to set an intention before embarking on the trip and then report back later on whether they experienced any coincidences that suggest the universe fulfilled the intention.

‘There are two main parts to randonauting,’ Joshua Lengfelder, who founded the randonauting movement, told Wired. ‘Exploring blindspots or places nearby that are outside of your conscious awareness, and experimenting with mind-machine interaction; the hypothesis that consciousness can influence the distribution of random numbers.’