The family of a father who was strangled has told how he was an ‘absolute gentleman’ as they desperately try to raise funds for his funeral.

Glen Hopgood, 52, was murdered in a house in Weybridge, Surrey Surrey, earlier this month.

His son Glenny told how Mr Hopgood had a great sense of humour and entertained friends with his one-liner jokes.

Ralph Carter, 59, was arrested at the scene and charged with his murder.

Glen Hopgood, 52, is pictured with his son Glenny before he was strangled to death at a house in Surrey

He will stand trial at Guildford Crown Court later in the spring.

Glenny said: ‘Dad was one of the funniest people you would meet. He loved his jokes and his one-liners. He wore his heart on his sleeve and was always laughing with a smile on his face.

‘He loved his family and his dog Archie was his best mate. He was also a huge Chelsea FC fan – football was really important to him.

‘Dad really enjoyed his films and music. He always took the time to speak to people and always said hello to everyone. He was very generous and would share his last pound. He was a true one of a kind.’

Police and paramedics were called to the house shortly after midnight on January 8. 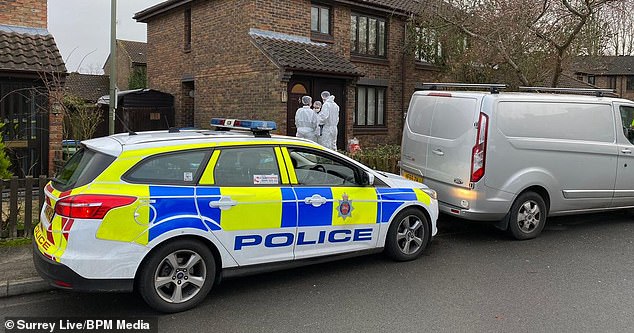 Surrey Police said officers were called to an an address in Old Palace Road at around 12.30am on January 8

They found him unconscious and in cardiac arrest.

He was rushed to hospital where he was pronounced dead.

It was understood that Ralph Carter – a friend of the victim – was arrested at the house in Old Palace Road, Weybridge, Surrey.

A spokesman for Surrey Police said today that Carter had been charged and had been remanded in custody to await trial.