The family of an American missionary has forgiven the native tribe which killed him when he arrived uninvited on their island last week and are urging authorities not to hold anyone but him responsible for his death.

John Chau, 27, was killed on North Sentinel Island last week as he attempted to visit the tribe. Local fisherman reported seeing the tribe drag his body days after Chau paid them to take him as close as they would to the island before he kayaked over to it.

He had written to his family beforehand and told them not to blame the Sentinelese people if he did not make it out alive.

Despite the fact that the tribe is protected and it is illegal for anyone to try to go onto the island, Indian police have lodged a murder case against its members and some of the people who helped Chau get there.

In an Instagram post on his account on Wednesday, his parents John and Lynda Chau, who live in Washington State, revealed they had forgiven the tribe and urged Indian authorities to release the local men who Chau paid to take him close to the island.

‘He loved God, life, help those in need, and had nothing but love for the Sentinelese people.

‘We forgive those reportedly responsible for his death. We also ask for the release of those friends he had in the Andaman Islands.

‘He ventured out on his own free will and his local contacts need not be persecuted for his own actions,’ the family said in their Instagram statement. 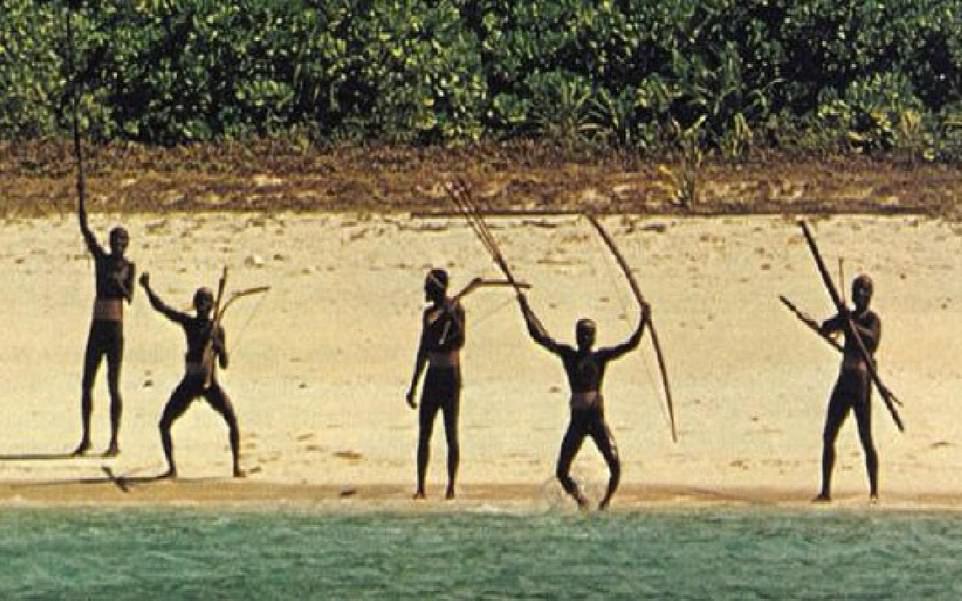 Chau was killed by members of the Sentinelese people (some of whom are shown in an undated stock photograph) after approaching their island uninvited on a kayak to spread the word of God. He was killed with a bow and arrow and his body is still on the island 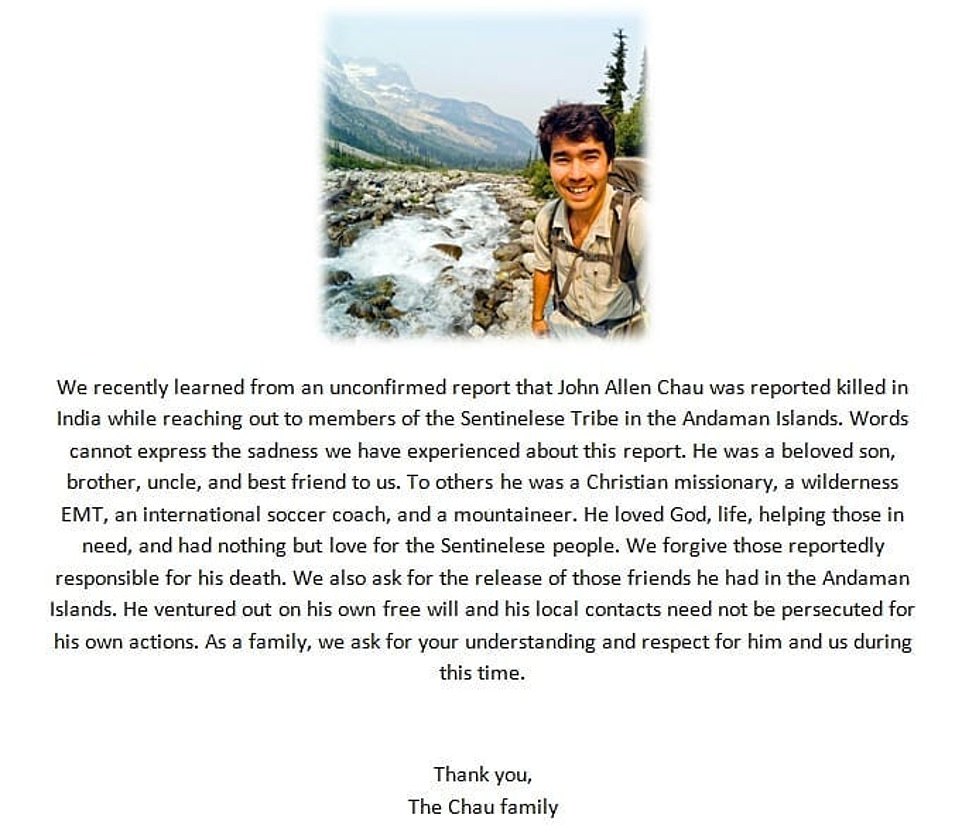 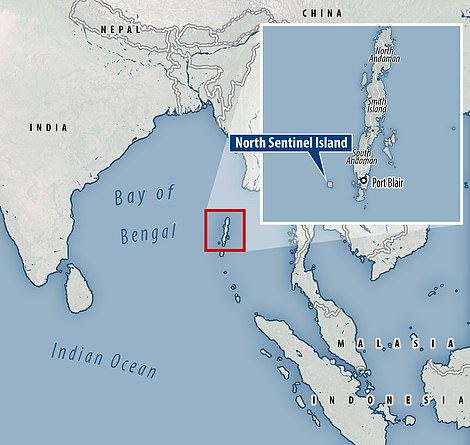 The Sentinelese tribe are an indigenous tribe who live on North Sentinal Island, lies around 450 miles from the coast of Thailand and more than 745 miles from mainland India

The Andaman and Nicobar Police Department has arrested seven people including five fishermen and two of Chau’s friends, alleging that they helped him get to the island despite it being illegal for anyone to go there.

It remains unclear if the police department has merely opened a murder investigation for the purposes of thoroughness or if they intend to level charges against the group which would pose a labyrinth of logistical and ethical challenges given its status as a protected tribe.

Police are still unsure of how they will even retrieve Chau’s body because of the tribe’s hostility.

A spokesman for the Andaman and Nicobar Police Department did not immediately respond to DailyMail.com’s inquiries on Friday afternoon.

International Christian Concern, an anti-persecution group based out of Washington DC, issued a statement about Chau’s death demanding that the tribe be brought to justice.

It alleged that he was killed because he was Christian and not because he approached the island where no one but the tribe has lived for 30,000 years.

‘This murder comes at a time when Indian Christians report ever escalating levels of persecution across the country. 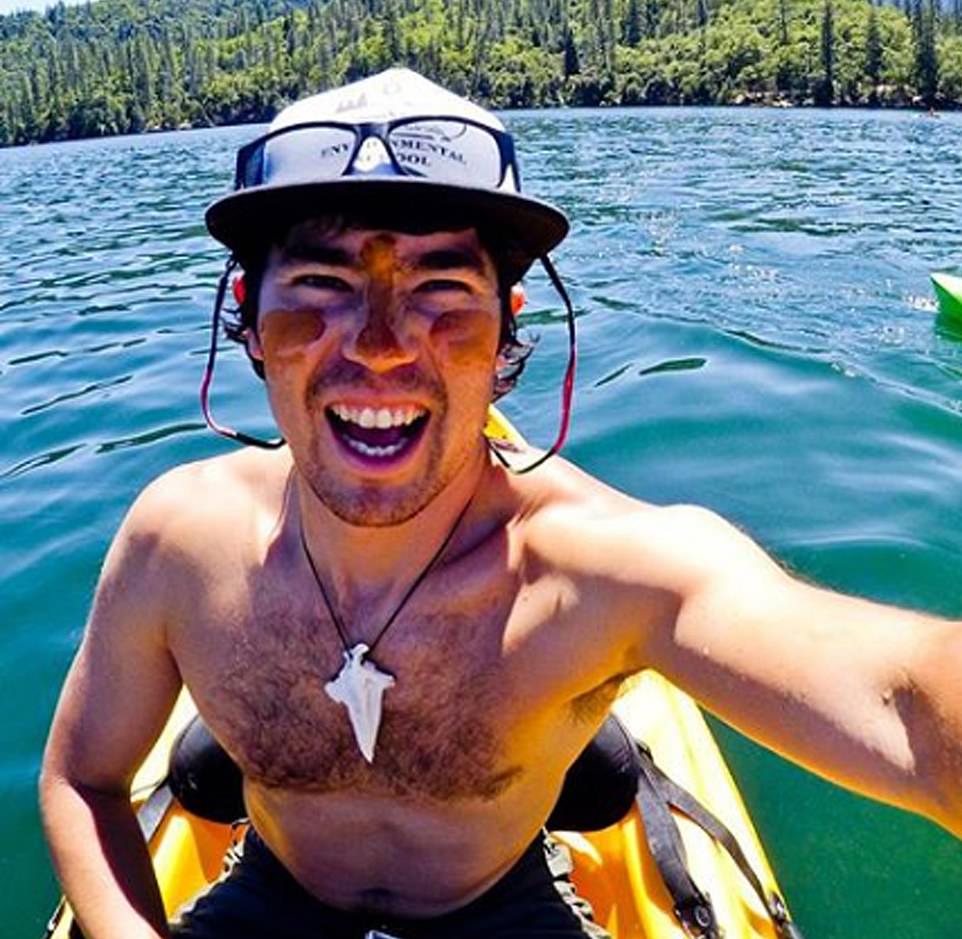 John Allen Chau, 26, was shot dead with arrows last week by tribesman when he arrived at North Sentinel Island – one of the world’s most isolated regions in India’s Andaman islands 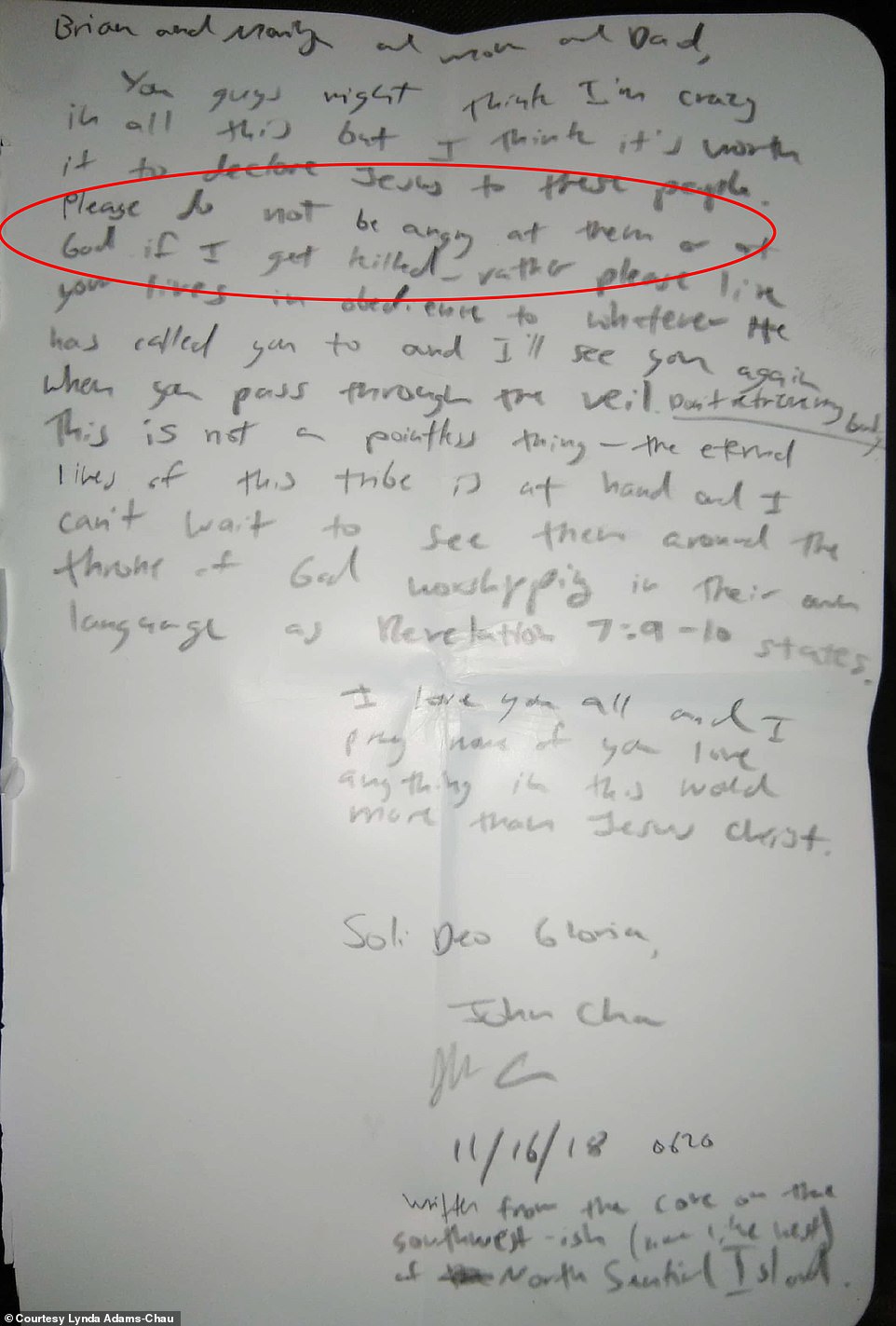 DailyMail.com has since obtained a letter Chau wrote to his parents he penned prior to his death that detailed how he was committed to teaching the tribe about Jesus

‘India has a history of attacks on foreign Christian missionaries….Across India, reports of persecution continue to escalate in both number and severity,’ it said.

‘Please do not be angry at them’: John Chau’s letter to his parents

You guys might think I’m crazy in all this but I think it’s worth it to declare Jesus to these people.

Please do not be angry at them or at God if I get killed.

Rather please live you lives in obedience to whatever he has called you to and I’ll see you again when you pass through the veil.

This is not a pointless thing – the eternal lives of this tribe is at hand and I can’t wait to see them around the throne of God worshiping in their own language as Revelations 7:9-10 states.

I love you all and I pray none of you love anything in this world more than Jesus Christ.’

William Stark, ICC’s Regional Manager, said, ‘We here at International Christian Concern are extremely concerned by the reports of an American missionary being murdered in India’s Andaman and Nicobar Islands.

‘Our thoughts and prayers go out to both John’s family and friends. Every day, new reports of persecution are being documented in India. Many Christians fear this may be the new normal for their community as Hindu radicals and others have been allowed to attack Christians and other minority communities with impunity.

‘India must take steps to counter the growing wave of intolerance and violence.’

Chau had written a letter to his parents before he kayaked to the island. In it, he told them not to hold the tribe responsible for his death if he did not come back alive.

Before he was killed, he tried to approach the island at least one other time and was shot at.

He described how an arrow pierced his bible as he approached them.

‘I hollered, “My name is John, I love you and Jesus loves you,”‘ he wrote in his diary. He went on to say: ‘You guys might think I’m crazy in all this but I think it’s worthwhile to declare Jesus to these people.

One of Chau’s friends revealed to DailyMail.com that he was ‘committed’ to travelling to the remote island, deep in the Indian Ocean, to preach Christianity to the tribesmen and had been planning the trip for at least three years.

Neil MacLeod, of Stornaway, Scotland, said he met Chau on a flight from London to Phoenix, Arizona, in October 2015.

‘I saw him reading some Christian literature and I’m a Christian and we started talking,’ he said.

MacLeod, 47, said Chau told him he had recently returned from India and was trying to figure out how to travel to the remote North Sentinel Island in the Bay of Bengal.

‘He mentioned that he wanted to go to these islands, the islands where he has now died,’ MacLeod said. ‘I had heard of these islands and I know how dangerous they are, so I was surprised by that. 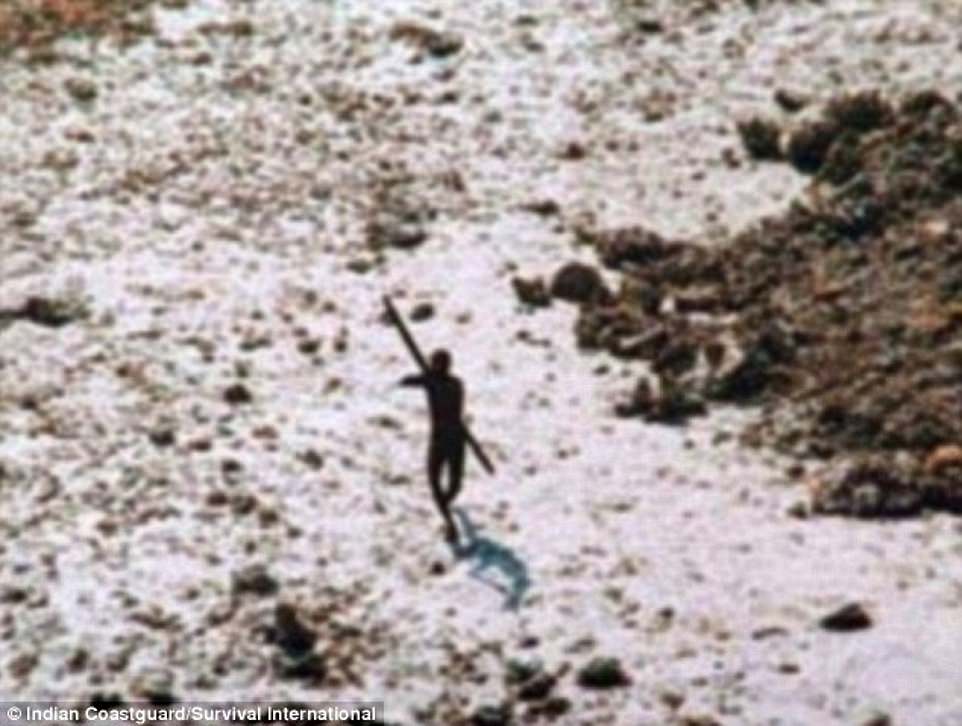 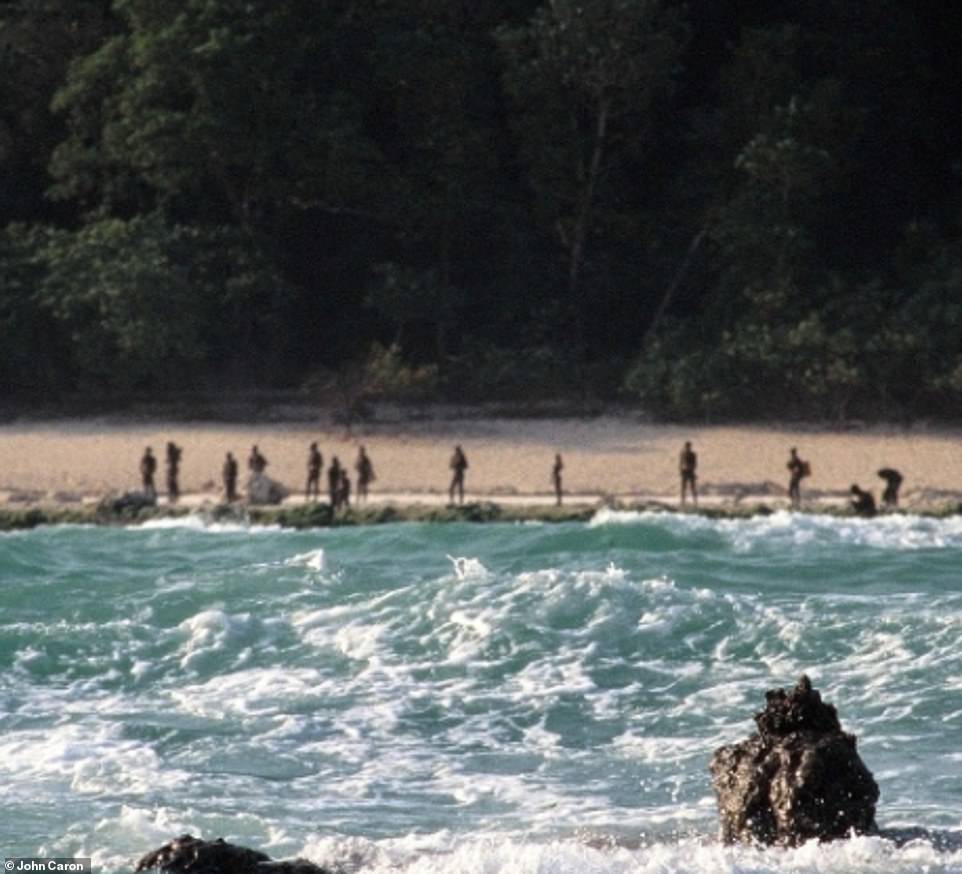 Chau took a boat ride with the fishermen before venturing alone in a canoe to North Sentinel Island (pictured, a file photo shows tribesmen on the island)

‘He recognized the dangers of travelling there, but I think he had a sense of call. This was something he was working on for three years. He was committed to going there. In his view, he was trying to help these people.

‘There are islands that are nearby and he was making relationships and connections to help him get to the islands.’

Since the flight, MacLeod said he had emailed back and forth with Chau, who he described as ‘magnetic’ and ‘charming.’

‘He was a lovely character and wanted to help people. The thing that came across was what a delight it was to be in his company.

‘He was such a warm and engaging and friendly kind of fellow. You might have an idea of what a missionary might be like, he was a million miles from that. I think he’s a real loss. I’m just very sorry about what has happened.’

MacLeod said Chau was based in Portland, Washington, and working as an EMT at the time. He said he had helped during major incidents, including in the wake of Hurricane Katrina in 2005.

‘He was a free wheel so he would go to incidents, like major incidents around the world and look to help,’ he said. ‘He had worked with FEMA when he went down to Katrina. He was working there.