Family of This Morning producer left brain-damaged speak out

The family of the high-flying This Morning producer left brain damaged after eating nuts have described learning of the fate of a teenager who died after suffering an allergic reaction to a Pret baguette as ‘horrendous’.

Amy May Shead, 30, was with friends in Budapest in 2014 when she took just one mouthful of a chicken and rice dish that contained nuts and suffered a near-fatal anaphylactic reaction.

Two doses of her EpiPen failed to contain the reaction and emergency services were called, but Amy had been starved of oxygen for nearly six minutes and was left in a coma with severe brain damage.

It emerged this week that Natasha Ednan-Laperouse, 15, died in July 2016 after suffering allergic reaction to a Pret A Manger baguette, which contained sesame despite it not appearing on the ingredients list.

Speaking on This Morning, Ms Shead’s aunt Julie Martin and her cousin Tom said when they heard about Natasha’s death they had the ‘same feeling’ as when Amy was suffered her injury, calling it ‘horrendous’ that something like that has happened again.

The family of Amy May Shead, 30, appeared on This Morning today to discuss the news that a teenager died after eating a Pret A Manger baguette that didn’t make it clear that it contained sesame, which she was allergic to. Amy was left brain damaged after a chicken and rice dish that she didn’t know contained nuts. Pictured left to right: Amy’s aunt Julie Martin, Amy and her cousin Tom 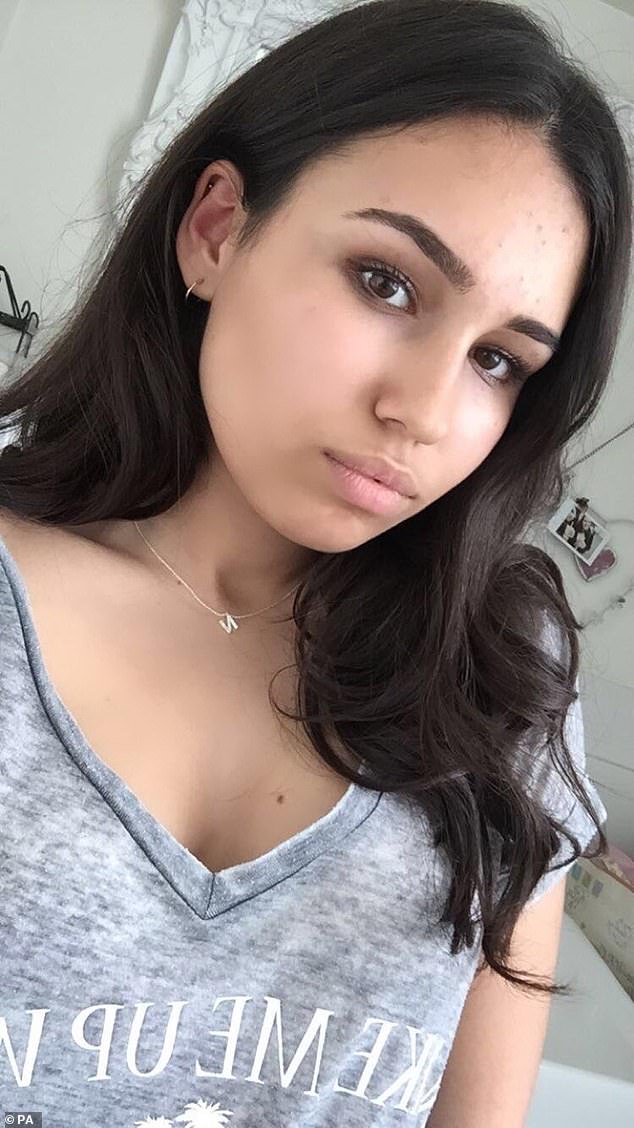 Natasha Ednan-Laperouse, 15, (pictured) who was allergic to sesame, died after eating a Pret baguette that didn’t list it as an ingredient in 2016

Amy and her family appeared on This Morning via video link from Essex where they were asked by Holly Willoughby and Phillip Schofield about the news.

Natasha fell ill within three minutes of consuming the baguette she bought at Pret’s Heathrow Terminal 5 branch, which she believed was safe to eat because sesame was not listed on the packaging.

The teenager, who was flying with BA to Nice with her father and a friend, later suffered a cardiac arrest on board and died in a French hospital. The inquest into her death began this week.

Tom, who helps run The Amy May Trust on his cousin’s behalf, said: ‘We never want to see this happen to anyone and when we do hear it’s happened its just horrendous.

Amy’s family said when they heard about Natasha’s death they had the ‘same feeling’ as when Amy died. Pictured: Amy before the incident (left and right) 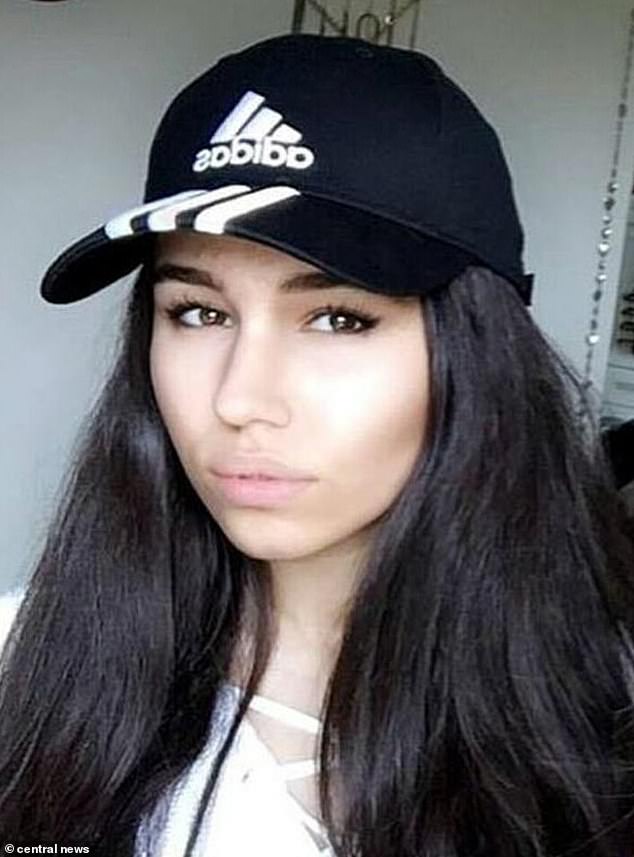 Natasha died of a severe allergic reaction after she bought the artichoke, olive and tapenade baguette from a shop at Heathrow Terminal 5 but was feeling ill within minutes

‘We go through the same feeling we went through in 2014. To think another family and all the ripples they are going to go through it’s a horrendous feeling.’

Pret products do not have to be individually labelled with allergen or ingredient information. This is because Pret sandwiches are freshly prepared in store.

Amy’s family are now campaigning for nuts to be banned from all flights as they fight for package labeling regulations to be tightened so they list every kind of allergen.

Ms Martin said: ‘The ripples extend huge after a tragedy like this. I have to send heartfelt condolences to Natasha’s parents and her brother because they are going through absolute hell at the moment.

‘It should have been avoidable, it shouldn’t have happened.’

In 2014 Amy had told the restaurant that she couldn’t have anything with nuts and the chef had also been informed of the allergy, unfortunately just one mouthful of the chicken and rice dish she had selected, led to the catastrophic reaction. 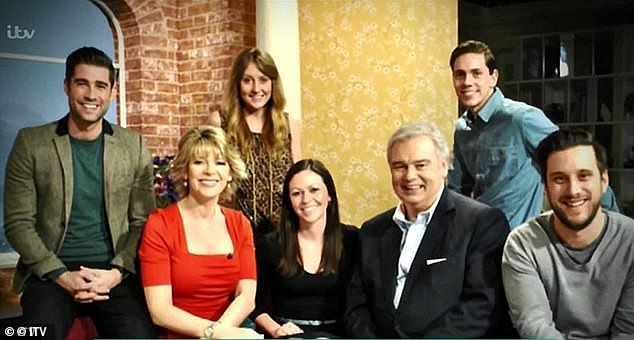 Amy (back row, centre) was an online producer for This Morning before she had a devastating reaction to nuts 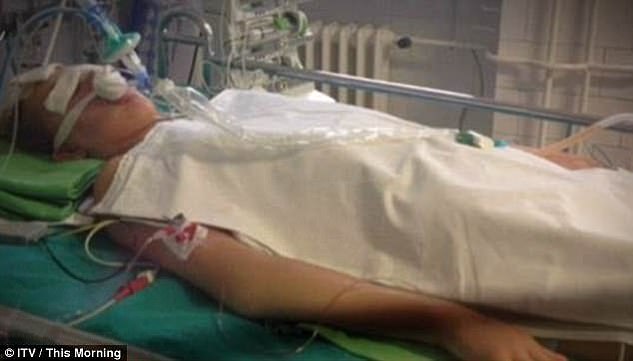 Amy was on holiday in Budapest when she ate just one mouthful of a chicken and rice dish at a restaurant that the chef had assured her was nut-free. She was left in a coma and is now severely brain damaged 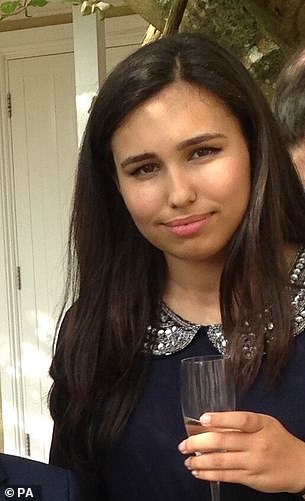 Amy administered two shots of her EpiPen – an epinephrine autoinjector – used in an emergency to treat an anaphylactic reaction.

It failed to counteract the allergy and it took half an hour for the medics to bring her back round.

Amy was placed on life-support when she arrived at the hospital in Budapest and her parents were told she only had a thirty per cent chance of staying alive and would probably not survive the week.

She spent 19 days in the hospital and after she was stabilised she was then flown home and treated at St Thomas’ hospital, London.

Amy spent a further 11 months there before being transferred to Putney Neurological Hospital for nearly a year.

Since the incident, Amy’s parents have had to sell their home to fund the costs of the hospital treatment she needs as the insurance didn’t cover their daughter’s condition. 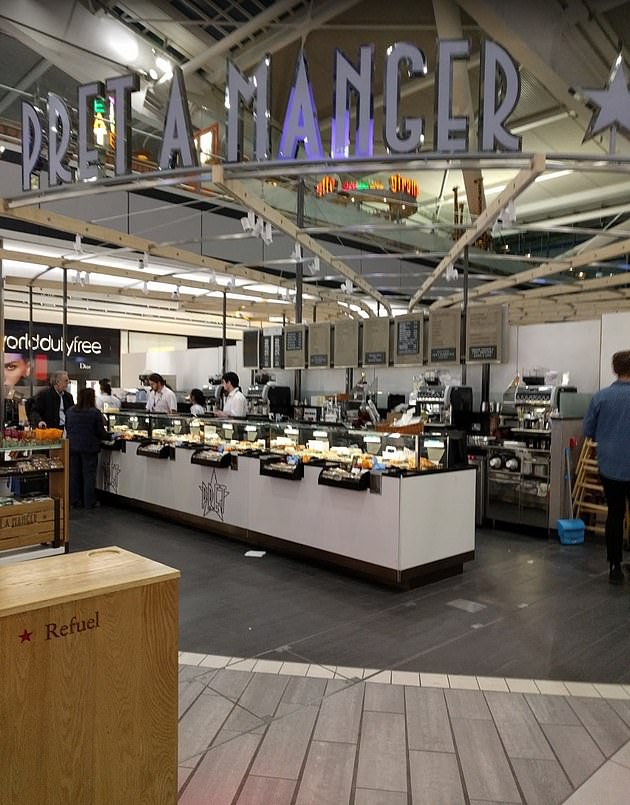 Amy requires intensive physiotherapy and receives speech and language therapy, which is entirely funded by the trust which also covers the costs of her specialist transport and any other medical needs.

A spokesman for Pret said: ‘We were deeply saddened to hear about Natasha’s tragic death and our heartfelt thoughts are with her family.

‘We take food allergies and how allergen information is provided extremely seriously. We will continue to do all that we can to assist the inquest.’