Family say they were left in tears on their £11,000 Tui holiday

A family claim they were left in tears after their dream £11,600 Tui holiday turned into a nightmare.

Tim Hill, his wife Becky and their three children Freddie, Macey and Jonjo, jetted to the Dominican Republic in December to spend Christmas at the Riu Bambu hotel in Punta Cana.

However, when they got there, the family from Buckinghamshire say they found cockroaches in their room, a dirty pool area that hadn’t appeared to have been cleaned and drunk people vomiting in the hotel reception.

The pool at the Riu Bambu hotel in Punta Cana, Dominican Republic where the Hill family stayed over Christmas. They said that the pool area was dirty and littered with cigarette ends 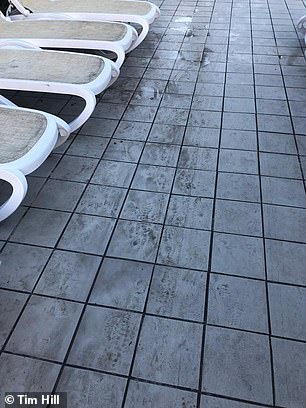 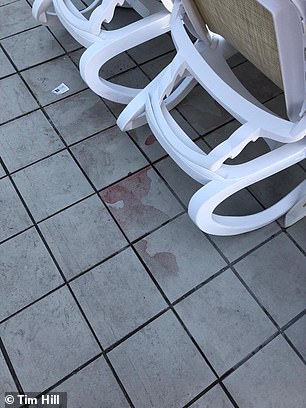 The family paid £11,600 for the two-week holiday last December. They claim that the pool deck was filthy with dirt and spilled drinks

And after the family also came down with a sickness bug while at hotel, Mr Hill says the holiday totally ruined their Christmas.

He told MailOnline Travel: ‘I’m a pretty well grounded, level headed person but even I was close to tears during this holiday.

‘It totally ruined our Christmas, we felt like we were robbed of our Christmas. At one point all we wanted to do was just come home.’

The family had booked the holiday at the Tui store in Uxbridge and say they were assured that even though the Riu Bambu was not a five star hotel, it was still a good four star resort.

However, when they came to board their Tui flight to the Dominican Republic, Mr Hill says none of the TV screens were working on their upgraded seats – leaving his three children without anything to watch during the nine hour flight.

Once they reached the hotel, they say their room had a broken safety deposit box, a bathroom door that came off the hinges, which on one occasion locked his wife in the toilet, and bed sheets that weren’t clean. 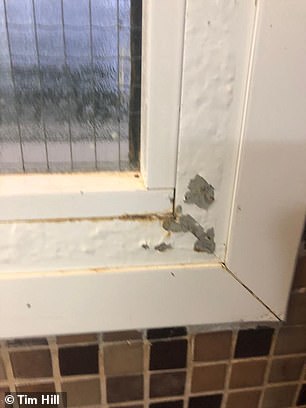 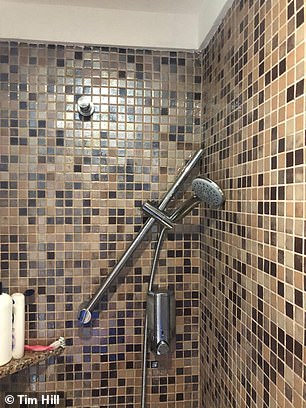 The family had booked the holiday at the Tui store in Uxbridge and say they were assured that even though the Riu Bambu was not a five star hotel, it was still a good four star resort. Pictured is the bathroom in the family’s room. Mr Hill said his wife got locked in the bathroom as the door was broken 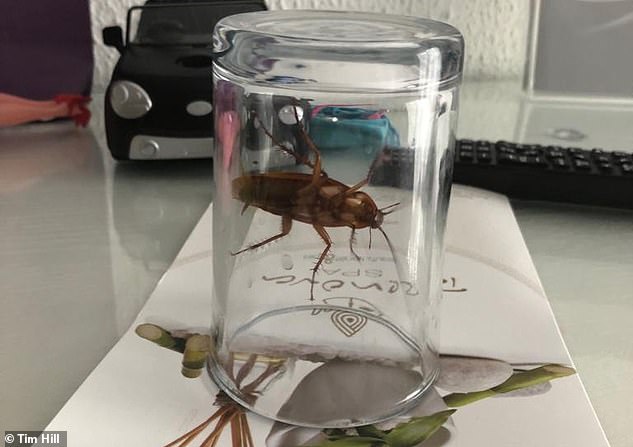 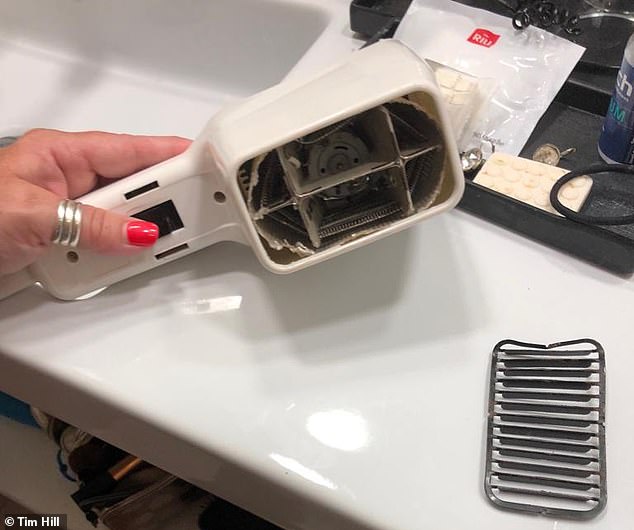 They also say that they kept receiving early morning wake-up calls to their room at 4am – even though they did not ask for them.

In the restaurant, Mr Hill claims that the food was just reheated from the day before, and the deck around the pool area was constantly dirty with cigarette butts and hair in the water.

He also says that the pool was also full of big groups of young people playing loud music on boomboxes and that in the hotel reception area there were numerous drunk people vomiting onto the floor.

Mr Hill, who works as a landscaper, explained: ‘It felt like it was an 18-30 holiday rather than a family holiday.

‘When people were throwing up drunk in reception, you’d expect the staff to do something fairly quickly as there were children present. 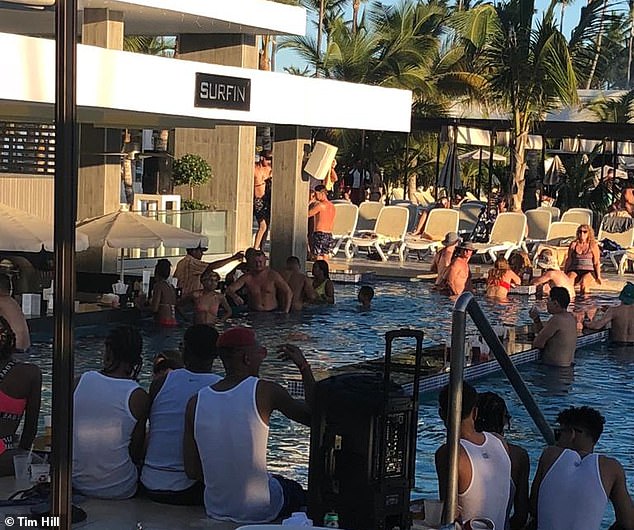 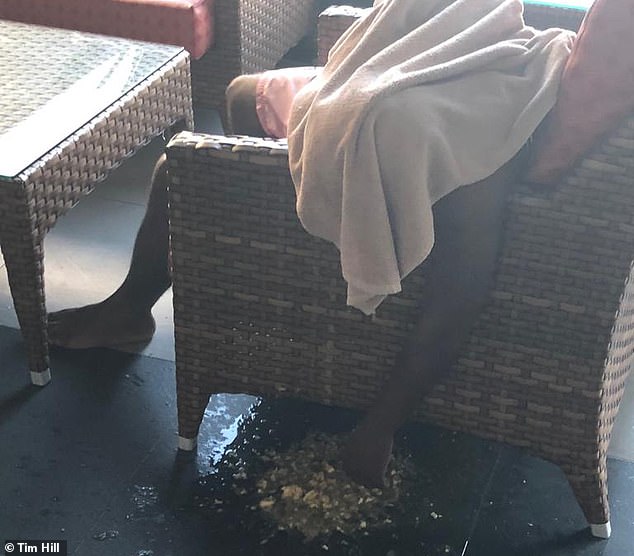 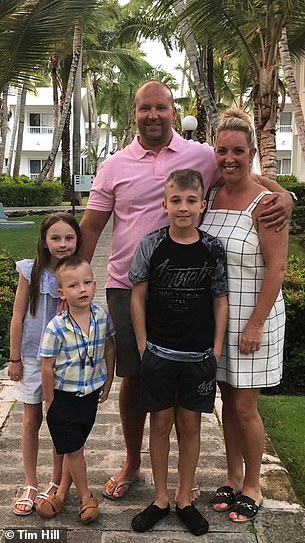 Mr Hill with his wife Becky and three children Freddie, Macey and Jonjo. He says his family were left in tears during the holiday

‘But they were just leaving them there and were just walking past and ignoring it.

‘It was quite intimidating for families really.’

After consistently complaining to the Tui rep in the resort, the Hill family were given access to the nearby Riu Palace hotel to use its swimming pool and restaurant for the second week of their holiday.

But Mr Hill refuses to accept that allowing them to use the neighbouring resort is adequate compensation and says so far Tui have not been responsive to his complaint.

He added: ‘We book consistently year on year with Tui and I’m a loyal customer.

‘But when there’s a problem, Tui don’t want to know. Tui said we’ve had compensation – they are referring to the second week where my family were in tears and they gave us wrist bands for the hotel next door.

‘But I believe we should have the full cost of our holiday back and compensation for what happened. My family were traumatised.’

A spokesperson for Tui said: ‘We’re sorry to hear of Mr Hill’s experience.

‘While we did try to resolve some of the issues raised in resort, we will be looking at the case once again and will contact the customer directly to discuss further.’

A spokesperson for Riu Hotels told MailOnline Travel that it has no complaints registered in its internal data system against the Riu Bambu by Mr Hill.

They also added that when they do receive complaints, they reply to all customers’ correspondence.