A family travelling from Newcastle to Cancun spent five hours waiting in their seats ‘with just a small cup of orange juice’ after their flight was forced to make an emergency landing.

Iain Gosman, his wife Michelle and their daughter Caitlyn, 13, from Edinburgh, had been holidaying at the Mexican resort town and were set to fly back home on Wednesday.

But their plane was forced to make an emergency landing in Orlando, Florida because of a technical issue.

Mr Gosman explained: ‘We were about an hour and three-quarters into the flight when the pilot came up on the tannoy and said we were going to have an emergency landing because of technical issues.

Iain Gosman (right), his wife Michelle (centre) and their daughter Caitlyn, 13 (left), from Edinburgh, had been holidaying in Cancun, Mexico and set to fly back to Newcastle but their flight was forced to make an emergency landing in Orlando because of a technical issue

‘There was a burning smell and there were fire engines following down the runway.

‘A lot of people were quite concerned because they had no idea what were happening, but the cabin crew were brilliant and kept everyone calm.’

Despite this, he said the overall organisation of the situation from TUI was not good enough.

US immigration regulation meant passengers were not allowed off the plane and  passengers had to wait in their seats for five hours.

During the wait he claimed they were offered nothing more than a ‘small cup of orange juice’ as staff said they did not want to run out of food and drink for the rest of the journey.

The travel company also said that custom regulations in Orlando meant they could not open the bar and could only offer passengers orange juice and water.

The plane was eventually flown back to Cancun with the burning smell still in the air, Mr Gosman claimed.

He said: ‘It was farcical, when we got back TUI were nowhere to be seen, there was no one telling us what was happening. 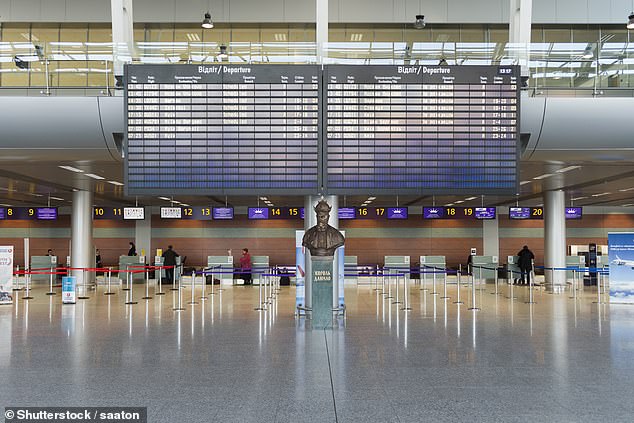 The family, along with other passengers, were not allowed off the plane because of US immigration regulations and had to wait on the plane for five hours. Mr Gosman said they were only offered ‘a small cup of orange juice’ and water  (stock image)

‘The local people on the ground told us nothing. We were stood queuing outside with no water waiting for a bus to take us back to the hotel we were in for the night.’

He explained that they arrived at the hotel at 4.30am, where there was a big queue of passengers trying to get a room, and that they were leaving at 11am.

‘So at best we were only get a few hours of sleep, we didn’t really have time to have a shower, get some food.’

Mr Gosman said what had annoyed him most was the failure to provide proper food for Caitlin, who suffers from a severe nut allergy, over the two different journeys –  meaning she went hours without proper meals.

On the outbound flight, he said the captain had taken Caitlin into the departure lounge to buy her food on his credit card.

TUI says the family were offered food vouchers so they could buy food before getting on the plane.

‘She had to go nine to 10 hours with just crisps and some crackers and cheese,’ he said.

‘They cater for gluten free and vegetarian but given how serious a reaction to nuts can be they seemed to suggest they didn’t want any responsibility.’ 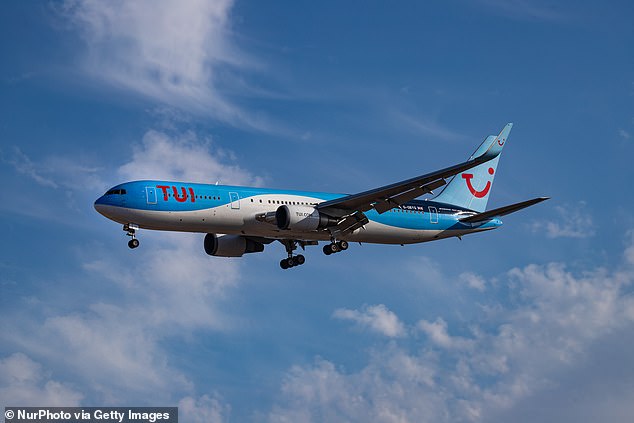 The Gosmans arrived back in the UK around 7.20am on Thursday, almost 24 hours later than intended, and the family had to buy new rail tickets to get back home to Edinburgh.

TUI has offered all passengers €600 compensation following the flight fiasco and has ‘sincerely apologise[d]’ for the chaos.

A TUI spokesperson said: ‘We would like to sincerely apologise to customers on board flight TOM643 from Cancun to Newcastle on Tuesday, which was diverted to Orlando Sanford as a result of a technical issue with the aircraft.

‘As a result of immigration restrictions at Orlando Sanford, customers were unfortunately unable to disembark the aircraft.

‘Once the technical issue was resolved, the captain made the decision to return to Cancun where customers were provided with all inclusive hotel accommodation.

‘Our team in Cancun did everything possible to minimise disruption for the customers. The flight arrived in Newcastle this morning.

‘We understand delays and diversions can be very frustrating and we would like to thank customers for their patience. The safety and wellbeing of passengers and crew is always our highest priority.’