The anonymous Southern family that once stumbled onto seven Ty Cobb baseball cards valued collectively at over $1 million apparently has one more card up their sleeve – and this one is worth $250,000.

Two years ago the family made one of the greatest finds in sports collectables history when they found seven cards of the Detroit Tigers legend printed between 1909 and 1911. Now they’ve discovered one more in the matching set.

‘It falls under the category of “you can’t make this stuff up,”‘ said Joe Orlando, president of Professional Sports Authenticator of Newport Beach, California. 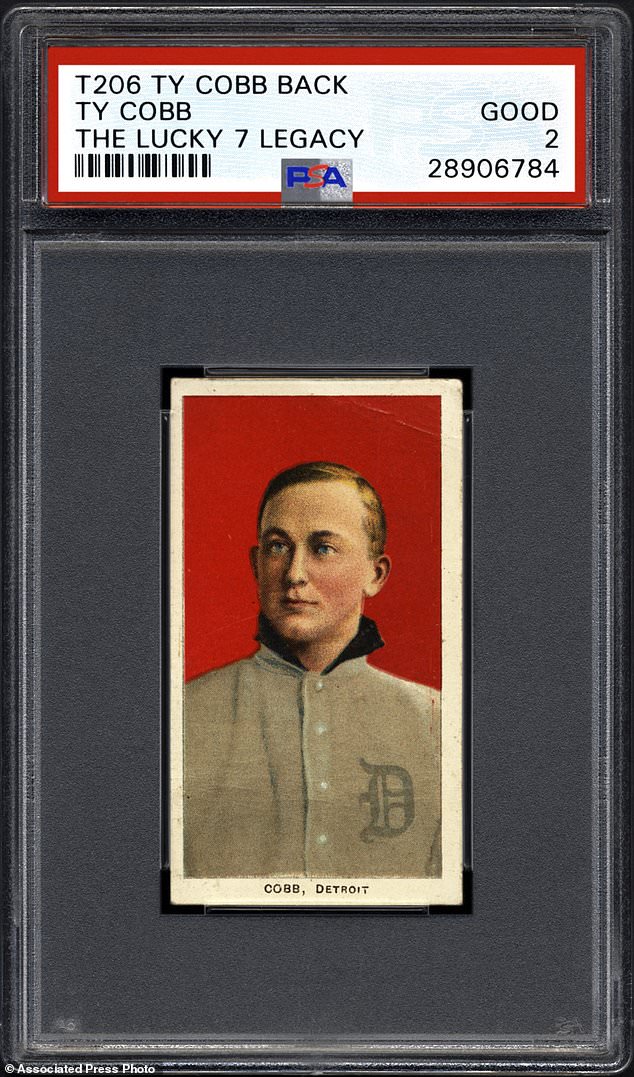 This undated photo provided by Professional Sports Authenticator shows the front of a Ty Cobb baseball card circa 1911. A family that made one of the greatest finds in the history of sports collectables two years ago when they found seven Ty Cobb baseball cards printed between 1909 and 1911 have now found this, the eighth card in the matching set

The first seven cards were in a rumpled paper bag that may well have ended up in the trash if someone didn’t peek inside.

‘The initial discovery, it was a real shock to them,’ Orlando said. ‘They put the cleaning on hold for a while … later they knew what they were looking for, and in a dusty box between two books, there was another one.’

The great-grandfather himself apparently had no idea that he was leaving a fortune to his descendants.

‘He wasn’t even a collector,’ Orlando said. ‘He just held on to these cards that were most likely given to him after buying a particular tobacco product.’ (Baseball cards were associated with tobacco, not bubble gum, in their earliest days.)

The family, which is from the rural South and wants to remain anonymous, intends to keep this one as a memento.

There are now 24 known copies of the card featuring the famed Detroit Tigers slugger that on the back reads, ‘Ty Cobb – King of the Smoking Tobacco World.’

That’s less than half the known remaining number of Honus Wagner cards from the same time that have long been considered the holy grail of collecting.

And while the surge in numbers for the Cobb cards may have diminished the value somewhat by making them less rare, Orlando said the excitement surrounding them, and the possibility that more could exist, have made up the difference.

‘Sometimes a card can be so rare that no one bothers to talk about it,’ Orlando said. ‘This raised the importance of the Ty Cobb card.’

The notoriously cantankerous Cobb was a member of baseball’s first Hall of Fame class in 1936 after retiring as baseball’s all-time leader with 4,189 hits.

Cincinnati Reds legend Pete Rose would ultimately finish with 67 more career hits in 2,791 more plate appearances, but Cobb’s career stats still compare favourably to Rose’s. Not only did Cobb lead the American League in batting 12 times, but he once hit .420 in a single season.

Rose never hit better than .348, and he only led the National League in hitting three times.

Cobb, who died in 1961, also retired as baseball’s all-time leader with 897 stolen bases, but that mark has since been surpassed by Rickey Henderson and Lou Brock.

According to leading evaluators at Gold Card Auctions, Baseball Cards still continue to bring in a lot of money. A lot depends on their age, condition and desirability quotient. Actually, the Sports Memorabilia market is seeing a strong resurgence with Baseball Cards leading the way.