A family vacation turned to tragedy when a four-year-old boy was swept away by a wave while walking with his mother along Kitty Hawk Beach in North Carolina.

The frantic mother looked for him, and spotted him briefly. However, another wave crashed in and she lost sight of him in the surf, the US Coast Guard said of the Wednesday afternoon incident.

The Coast Guard deployed a MH-60 Jayhawk helicopter crew and a 47-foot Motor Lifeboat crew to search for the boy. He was never found.

A make shift memorial was erected for the boy on the beach in Kitty Hawk, NC after he was swept away by an enormous wave on Wednesday

The only trace of the four-year-old was his hat which turned up two miles north of where he went missing in the surf, according to 13 News Now.

The mother and her son’s identity have not been released.

Sadly, by Wednesday evening, at around 8.30pm, the Coast Guard said it was suspending it’s search.

‘Suspending a search for anyone, let alone a young child, is the most difficult thing a commanding officer in the Coast Guard is called upon to do,’ Capt. Bion Stewart, a commander with the Coast Guard, said in a statement.

‘I can’t imagine what the family of this little boy is going through right now.’

The family from New Hampshire, were enjoying the sunny warm weather in North Carolina.

However, the waves and surf were treacherous. Waves were as high as six-feet Wednesday. 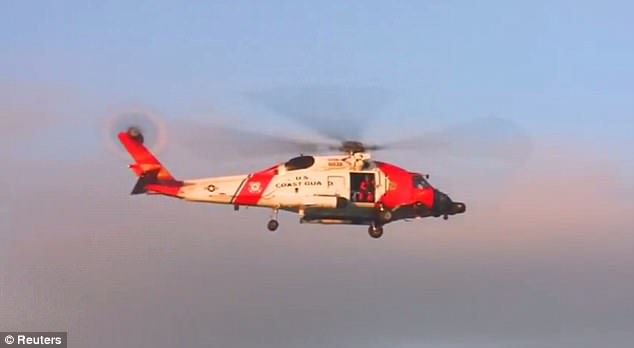 The Coast Guard called off their search for the boy around 8.30pm Wednesday (file photo)

Jeremy Thomas with the Coast Guard said ‘the currents in North Carolina are bad.’

‘It’s always a danger near the ocean,’ Thomas said. ‘It’s just a tragic case. No one wants to see something like this happen.’

A makeshift memorial to the boy was set up along the beach where the boy went missing.