A group of Jehovah’s Witnesses who kidnapped their neighbors and said they were fleeing because they believed the world was ending reportedly each share a rare, psychotic disorder.

Provincial court Judge Jacqueline Schaffter said the two women and man, who have not been identified, each have the disorder, but did not reveal the name of it.

Schaffter said: ‘It will always remain difficult for us to fully understand.

‘The accused all believed on the day in question that Armageddon had arrived.’

The three family members were given one year community service sentence and two years probation.

The trio will also be required to undergo counseling and refrain from ‘muscle testing, hypnosis, bodywork therapy and other practices that involve altered levels of consciousness,’ according to the Toronto Sun.

The bizarre kidnapping happened in November 2017 when an Alberta man, his adult daughter and her six-week-old son were forced out of their home and into an SUV by five people – four of whom were completely nude.

The man and his family were able to escape, and the suspects were all arrested.

According to the Canadian Press, two women and one man were charged with kidnapping and pleaded guilty to unlawful confinement. One of the women also pleaded guilty do dangerous driving.

A family of Jehovah’s Witnesses were naked when they kidnapped their neighbors in November 2017. It has been newly revealed the three family members suffer a rare, psychotic disorder 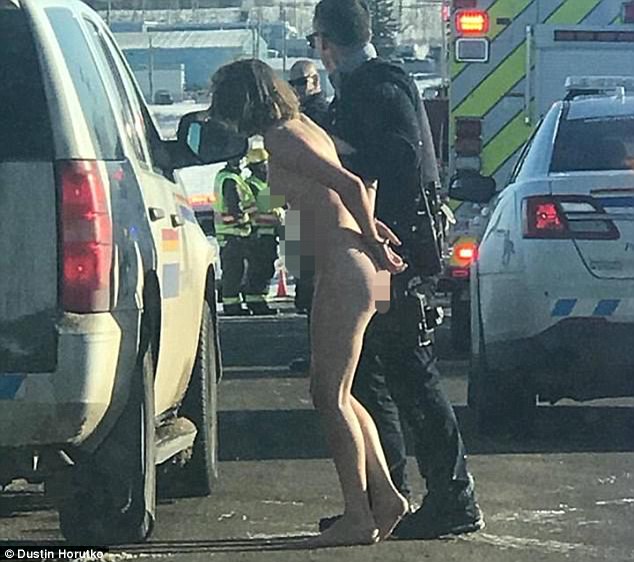 Plea documents reveal that the family – three adults and two teenagers – thought the world was ending and wanted to find a safe place to go. One of the females is pictured during her arrest

Authorities said the three adults and two teenager girls traveled to Leduc, Canada to visit relatives. During their three-day stay, the group reportedly refused to leave the home and barely ate.

At some point, the group convinced themselves that they had lived through the Great Tribulation, a period of suffering some evangelical Christians believe is the beginning of the Apocalypse.

One of the teenagers reportedly told authorities that while at the house she heard screaming and saw ashes flying through the air.

The teen said she hid in the bathroom with other family members because they believed ‘demons and wicked people’ were outside.

According to the Royal Canadian Mounted Police, the family thought they were in imminent danger and fled the house to find safety.

Police said the family, with the exception of the mother, was naked and didn’t have time to get dressed before they left the house in a hurry.

‘They did so because they believed they were in danger, either from bad or wicked people outside or from demons,’ the plea document states.

‘Four who were naked were changing but they had to leave right away because it was unsafe, so they left without clothes.’ 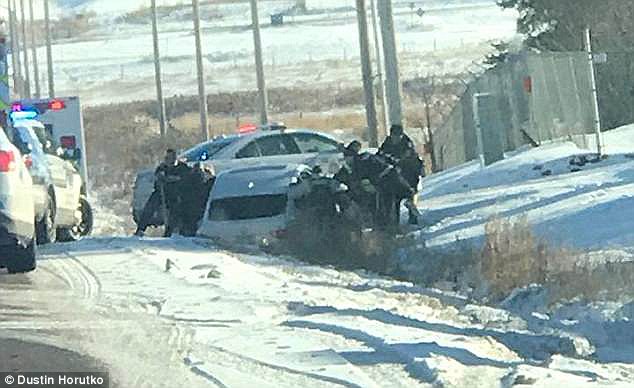 Authorities said the family made a pit stop at a neighbor’s house and forced the man, his daughter and a baby into their car. The man was put in the trunk, and his daughter and the baby were in the backseat.

The man was able to escape from the trunk because it did not latch shut. His daughter and her baby were also able to get out of the car and flagged down a truck driver for help.

To add to the bizarre story, the Canadian Press reports that the family of kidnappers rammed the truck from behind causing their vehicle to crash into a ditch.

When police arrived, the family were chanting and refused to get out of the car. One of the teenagers thought the officers ‘were monsters who would kill them’, court documents reveal.

Police said the family ‘displayed extreme strength’ and two of them were unaffected by the officer’s pepper spray. The three adults had to be shot with Tasers between two to four times before they relented. One of the adults reportedly hid from officers underneath the car and had to be pulled out with a strap.

The neighbors told police that the family appeared to be ‘demonized’ and were ‘obviously not in their right minds’.