Family’s heartbreak as boy, 14, killed by a car on his way to school

The family of a 14-year-old boy who died after being hit by a BMW on his way to school have spoken of their heartbreak ahead of his funeral today.

Zakir Maroof died after being struck by a car on Park Road in Oldham, Greater Manchester, as he walked to school with a group of friends yesterday morning.

Staff at the teenager’s high school, The Hathershaw College, rushed to his aid before paramedics and police arrived. 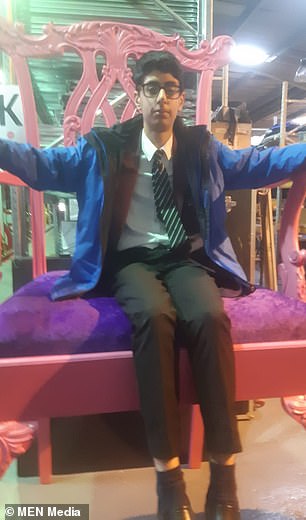 Zakir Maroof, 14, pictured, was knocked down and killed on  his way to school in Oldham, Greater Manchester yesterday morning. Speaking at his son’s funeral, Zakir’s father Mohammed said his son was ‘a very bright student’ 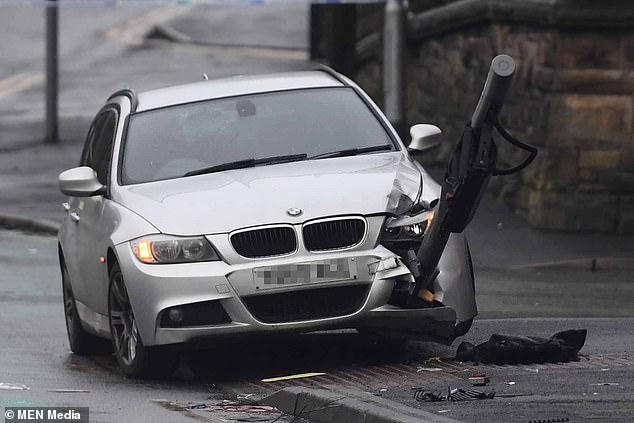 A 42-year-old woman was arrested shortly after yesterday’s collision on suspicion of causing death by dangerous driving. She was later released under investigation 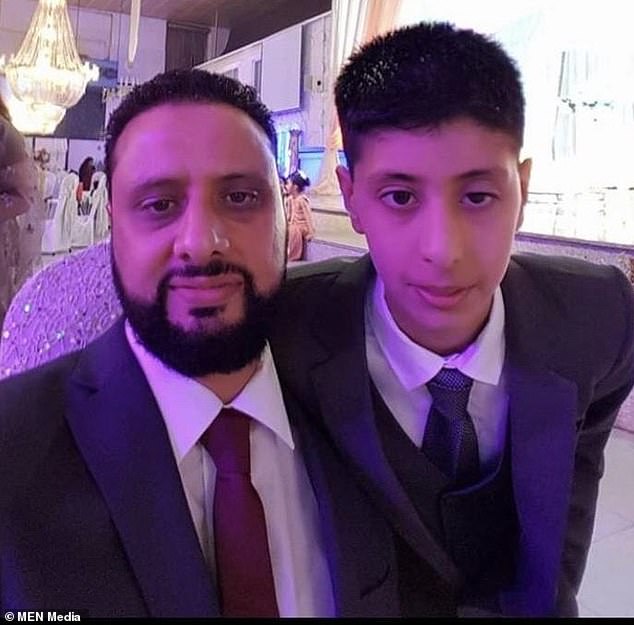 Zakir Maroof, pictured with his father Mohammmed. Speaking at a service at his local mosque today, Mr Maroof paid tribute to his son. He said: ‘He was my life. He was a lovely boy. So kind. He had lots of friends. He enjoyed playing games, going out to the park on his bicycle and he also used to like coming swimming with me. He was very bright. He was doing very well at school and he was going to go far. He had every reason to live but he has been taken away’

Zakir was rushed to hospital but could not be saved.

His distraught father, Mohammed Maroof, said Zakir was a bright student who ‘had every reason to live’ and that his life had been ‘shattered’.

Speaking at the town’s Al-Madina Jamia Masjid mosque, where he was being comforted by family and fellow worshippers, Mr Maroof said: ‘He was my life. He was a lovely boy. So kind.

‘He had lots of friends. He enjoyed playing games, going out to the park on his bicycle and he also used to like coming swimming with me.

‘He was very bright. He was doing very well at school and he was going to go far.

‘He had every reason to live but he has been taken away.

‘I just cannot believe it. Our lives have been shattered.

‘I just want to thank everyone for remembering him and for their support.

The whole community has rallied round and I’ve had so many condolences and offers of support.’

The Hathershaw College principal, Mark Giles, said: ‘Zakir was very much part of our school community. 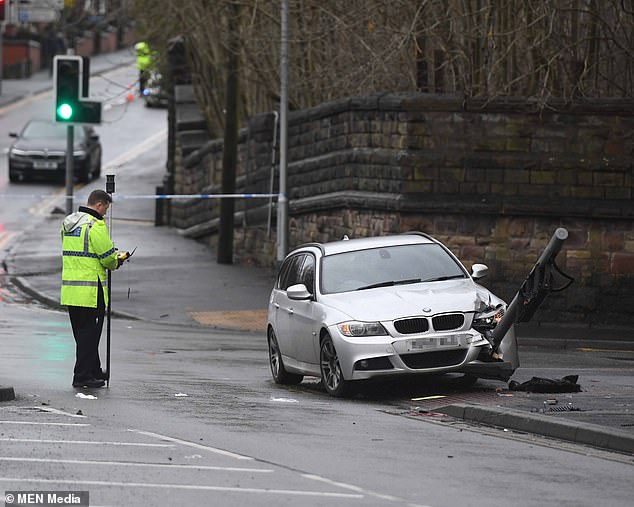 ‘He was a popular young man who took part in many activities, most recently participating in the Young Enterprise Company Programme.

‘Staff and students are distraught by what has happened.

‘Our thoughts and prayers are with his family and friends.’

The school closed at 12.15pm this afternoon as a mark of respect and to allow friends and colleagues to pay their respects to Zakir at the mosque.

Zakir previously attended Greenhill Primary School, where two of his siblings and two of his cousins are still pupils.

The school’s head teacher, John Padley, who visited the mosque today, said: ‘I taught him before I became headteacher.

‘He was just a lovely lad. He was a bit of a comedian. He had a great sense of humour.

‘He was very popular and the amount of friends he had was testament to the kind of lad he was.

‘We’re all shocked and devastated at what has happened and our thoughts are with his family.

‘Support is being provided for his family members who are still at the school.’

Floral tributes have been left close the scene.

Park Road was taped off for several hours at the junction with Woodstock Road/Kings Road after the collision shortly before 8.15am on Tuesday morning.

A 42-year-old woman arrested on suspicion of causing death by dangerous driving after the collision has since been released under investigation police.

Greater Manchester Police are continuing to appeal for any potential witnesses to come forward.

Chief Inspector Nicola De Maine, of GMP’s Oldham District, said: ‘This is a tragic and very sad incident. Our thoughts are with the boy’s family at this dreadful time.

‘Specialist officers are supporting them while we investigate the circumstances surrounding the collision.

‘If you were in the area at the time and witnessed the collision, or have any details that can assist our investigations, please call police.’