Fan arrested at Maroon 5 concert after storming the stage

The fans had flocked in their thousands to watch Maroon 5 perform in Toronto on Thursday night.

But for one woman that wasn’t enough – she wanted to get up close and personal with her idol, Adam Levine.

The woman was arrested after storming the stage and pursuing the singer, as he retreated along a catwalk set out into the crowd.

Watch out: Fan arrested at Maroon 5 concert after storming the stage and trying to dance with Adam Levine in Canada on Thursday; the woman, right, can be seen approaching the singer, front, as a security guard comes up behind her

Video footage posted online from inside the Scotiabank Arena shows that after climbing onto the stage the woman danced in front of the band.

Security can be seen rushing from the wings, as the woman enthusiastically dances.

As Adam Levine retreats, she sets off in pursuit, with a security guard managing to step in between the two. 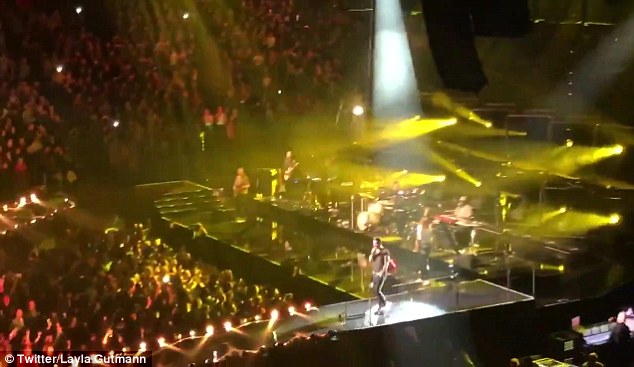 Making his getaway: When Adam saw the woman he set off down a catwalk, without stopping singing; the woman can be seen behind him, in front of the keyboard 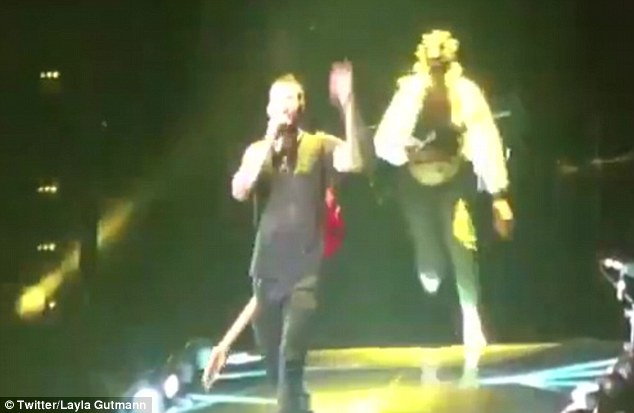 Hot pursuit: The woman ran at full speed towards her idol

The woman, wearing a jacket and black trousers, is then led swiftly away, subdued by a large security guard firmly holding each arm.

According to TMZ the 22-year-old was later arrested for public mischief and released on bail.

Along with his work on The Voice, Levine continues to tour with his band. 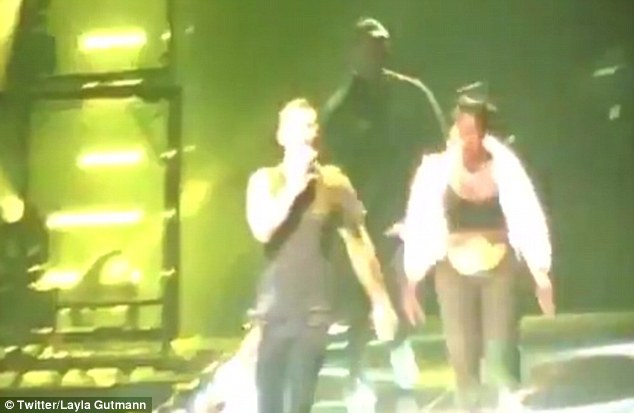 Help is near: The security guard can be seen in pursuit

Indeed it was reported last week that Maroon 5 will headline the Super Bowl LIII halftime show in 2019.

The Sugar rockers – comprised of Levine, Jesse Carmichael, Mickey Madden, James Valentine, Matt Flynn, PJ Morton, and Sam Farrar – are said to be the act topping the bill at next year’s Super Bowl, which will take place in Atlanta, Georgia on February 3rd, 2019.

Two sources confirmed the news to Variety magazine, although the band have not yet commented on the news, and a representative for the NFL told the publication it’s ‘tradition to speculate’ about acts. 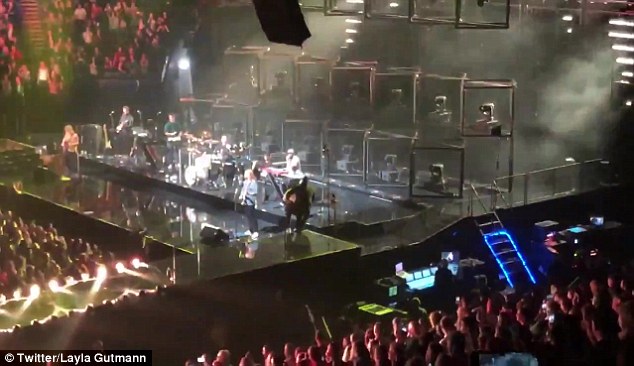 Arrested: A security guard at each side, the woman is firmly removed from the stage, as Maroon 5 continue their song

The rep said: ‘It’s a Super Bowl tradition to speculate about the performers for the Pepsi Halftime Show. We are continuing to work with [longtime sponsor] Pepsi on our plans but do not have any announcements to make on what will be another epic show.’

If the She Will Be Loved stars do take to the iconic stage to perform in front of millions across the globe, they will follow in the footsteps of this year’s performer Justin Timberlake, as well as the likes of Lady Gaga, Coldplay, Katy Perry, Bruno Mars, and Beyoncé, who have all graced the stage in recent years. 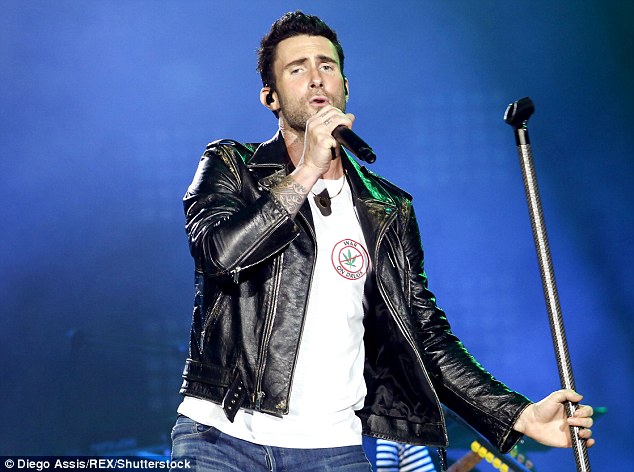 Polished performer: It was reported last week that Maroon 5 will headline the Super Bowl LIII halftime show in 2019; Adam Levine is seen on stage last week