Fancy a pub that really is YOUR local? Then become a co-owner

When a local pub or shop shuts down, it can rip out the heart of a community. But a number of communities up and down the country are fighting back – by teaming up to buy them.

The community-owned Green Dragon pub in Exelby, North Yorkshire, became a community pub three years ago when the owners decided to sell it for development – but the community stepped in.

‘It is the only amenity in the village and we didn’t want to see it turned into a housing estate or the like,’ says pub company secretary John Walker. ‘All births, marriages and deaths are marked here.’

The group raised £250,000, with shares costing £500 each. Its first shareholder was Chancellor Rishi Sunak – the local MP (even though he is teetotal).

The plan proved so successful that the pub is about to pay out a three per cent dividend to its 149 local shareholders. This is equivalent to £15 per £500 share.

Since taking over the pub, the group has added a cafe, delicatessen, new car park, and renovated an attached cottage. ‘Buying the pub has brought the community together,’ adds John. ‘Since we opened, new community groups have been formed, including a book club, a gardening club, a women’s group, art group and folk music club.

‘Also, residents regularly do talks on their interests. We’ve had one talk recently on forestry and another on a steam-powered jet bike world record.’

John advises other communities to consider doing the same rather than resigning themselves to losing vital businesses. ‘Get the community behind it and surround yourself with motivated, enthusiastic people,’ he says. ‘And then just keep at it.’

In Mentmore, Buckinghamshire, The Stag is once again the beating heart of the village. But the future of the 147-year-old pub wasn’t always so rosy after tenants cleared out mid-service one evening in 2018 and the shutters came down.

Sad to lose their local boozer, villagers Adam Goran and Peter Brazier came up with what they thought was a madcap plan. ‘We thought, what if the community could bring The Stag back to life?,’ says Adam.

The pair posted flyers inviting residents to a meeting about buying the pub.

‘We put out a few chairs in the village hall, expecting a handful of people might turn up,’ says Peter. ‘But the meeting was packed, with some people outside in the street straining to listen in.

‘Before we could get a word in, the meeting erupted in rapturous applause. We were overwhelmed – and knew we were on to something.’

Fast forward two years and The Stag has just reopened.

It has 42 new owners aged between 21 and 81 who have invested £805,000 in total. Four in five live within five miles of it. The Stag has been beautifully refurbished after local tradespeople were hired or lent their time and skills during lockdown.

‘People in the village want somewhere to meet,’ says Caroline Gates, one of the owners.

‘I met my husband here 47 years ago and we’re still in here every Friday night.’

‘There are also financial benefits,’ adds Peter. ‘When the last pub in town shuts down, house prices fall by 15 per cent on average. It’s another good incentive to keep a pub open.’ The shareholers set up the company as an Enterprise Investment Scheme, which should give investors tax relief of 30 per cent of the amount they invested. While they plan to turn a profit, serving the community is the investors’ main agenda.

‘We have hired a fantastic chef, Eddy Mclean-Hall, who started his career here as a kitchen porter a decade ago,’ says Peter.

‘He’s working with local farmers and has a kitchen garden to ensure food is sustainable and supports the local economy.’ The pride in the pub and determination for it to succeed is obvious when we visit. Caroline is constantly glancing round to check that diners have menus while Peter is busy fixing the lighting.

I N Kirkoswald, Cumbria, more than 600 shareholders have just reached their £200,000 target to buy the local shop. They plan to open as a community store within days – selling bread, groceries, newspapers and wine. 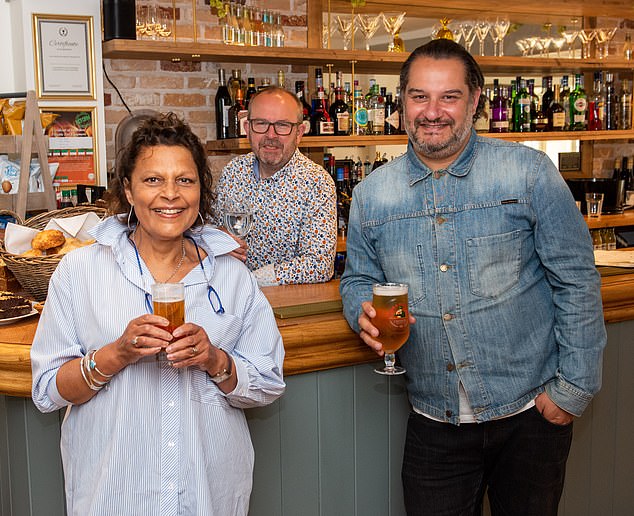 ‘But some are from other villages that have lost their last shop and regret that they will never get it back. They want to help stop it happening to another village.’

The community got together to buy their shop when its previous owner died of Covid last year. There had been a shop on the site as long as residents can remember – the last remaining in the village.

‘I think the pandemic has made us all realise the value of keeping things local, sustainable and having a community,’ says Ruth. ‘We didn’t want to risk losing this.’

She adds that the shop is so much more than a place to buy groceries and other essentials. It is vital for access to cash as it hosts the only free-to-use cash machine for miles around. It also has the area’s only public toilet.

The community is supporting the local shop – and the new shop owners plan to return the favour. ‘We’re stocking local produce and we have the option to use profits to support local causes,’ adds Ruth.

The number of community-owned shops and pubs has been rising steadily over the past 20 years, from 67 and four respectively to 399 and 150 today. This trend has accelerated in the past six months.

The Plunkett Foundation, a charity that offers advice and support to community businesses, has seen enquiries increase by 50 per cent this year. It adds that community shop volunteer numbers have grown from 7,000 to 12,000 throughout the pandemic.

Hannah Barrett, community business team leader at the Plunkett Foundation, says: ‘As more community-owned businesses succeed, other towns and villages are seeing it as a viable alternative to losing the amenities that bind them together.’

Community-owned businesses have shone through the pandemic, with many offering delivery services, food parcels, and keeping up community spirit and morale.

They are far more likely to succeed than those that are privately-owned because the whole community is invested in their success. The long-term survival rate of rural community-owned businesses in the UK is as high as 96 per cent. The number of new community owned-businesses could rise further still, thanks to the Community Ownership Fund, which is due to open any day now.

The £150million Government fund will allow community groups to obtain funding of up to £250,000 – on condition that they raise the same amount themselves. The money must be used to buy or take over a community service such as a pub or shop that is threatened with closure.

1. Canvas local residents and gather support. You’ll need the backing of the community.

2. Form a steering group and elect a committee at a public meeting to drive the project forward.

3. Get advice. The Plunkett Foundation can help. Contact plunkett.co.uk, 0845 5571469. Also, speak to other successful community businesses for tips and inspiration.

4. Create a business plan, including a legal structure and finance.

5. Raise money. As well as fundraising, look into loans, grants and community schemes.

7. Get ready for trading. Recruit and check you comply with all the regulations.