The tasteless costume comes with a dark brown waistcoat, a long beard and belt and is on sale for £32.99.

It was available to purchase just days after the Manchester Arena reopened following a suicide attack which killed 22 innocent music fans – including children.

Other items which were available to purchase from online included a Nazi officer costume, an escaped ‘psycho’ patient and a burqa outfit.

The adult Taliban ‘terrorist’ costume is available to purchase from Mad About Costumes for £32.99

The Tabliban costume is ‘one size’ and is available to purchase from Mad About Costume on the eBay site.

However, the online auction site told MailOnline today that they had ‘removed the items from the site permanently’.

But the adult German Gestapo Officer costume was still available to buy from the Mad About Costume section on eBay today.

It comes with a black military belt, a red arm band, an officers hat, boot covers and is available in ‘one size’ for £44.99.

The Bake Off judge said he was ‘absolutely devastated’ if the 14-year-old photograph of him dressed as a Nazi officer ’caused offence to anyone’. 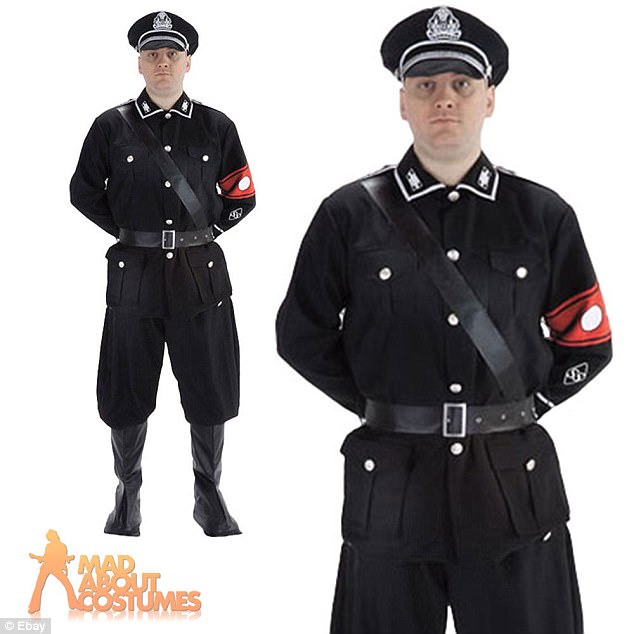 Another costume which is available to purchase is a German Gestapo officer outfit which costs £44.99

She told the Sun Online, said: ‘Depicting mental illness in this way fuels some of the worst myths that those of us with mental health problems are ‘scary’ or ‘dangerous’.

‘We are finally starting to see attitudes shift, but this will only serve to set us back by reinforcing sad old stereotypes.’

An eBay spokesman said: ‘We have removed these items from the site permanently.’