Penrith were controversially denied a try against in their 18-4 win against Gold Coast after Nathan Cleary was adjudged to have obstructed Moeaki Fotuaika in the build-up.

The Panthers thought they had opened the scoring 22 minutes into their clash with the Titans when fullback Dylan Edwards scored after receiving a pass from Cleary.

As Penrith star halfback stepped out of his teammate’s way, he was caught in traffic and the bunker ruled he had blocked Fotuaika from making a tackle on Edwards.

‘Nathan Cleary is ahead of the ball,’ bunker official Gerard Sutton said.

‘Moe Fotuaika shouldn’t have to contend with him to get around and make a tackle.’

Daily Telegraph journalist Phil Rothfield was one of several pundits slamming the decision, describing it as ‘pathetic’.

Speaking on Fox League, Shane Flanagan and Steve Roach disagreed over the bunker’s interpretation, with the latter claiming the Titans prop was ‘1,000-1 to get to Edwards’.

Flanagan, however, noted Cleary could have no complaints. ‘He [Cleary] is standing in the defensive line,’ the former Cronulla Sharks coach said.

‘It has always been a rule that if you stand in the defensive line and obstruct in any way.’ 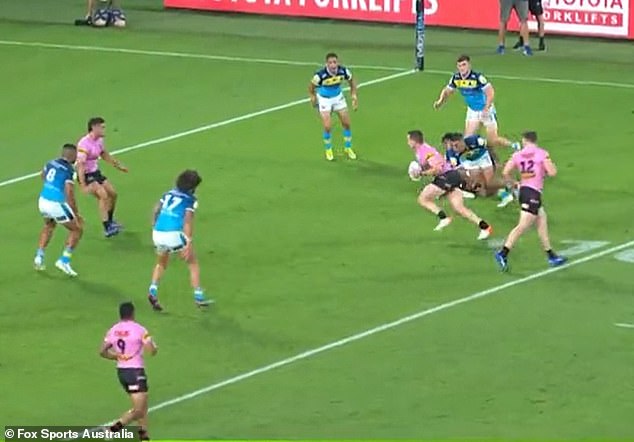 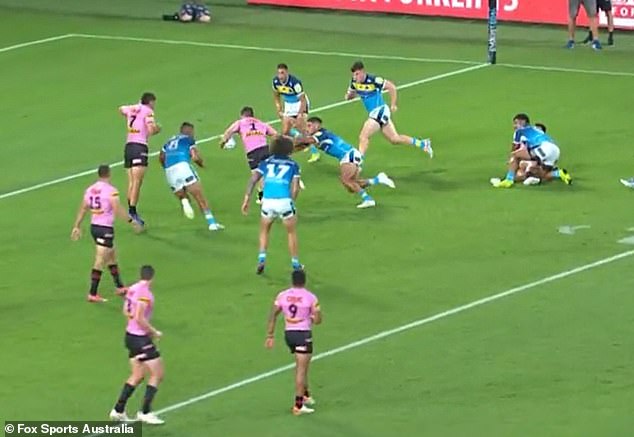 Asked whether Cleary should’ve got back behind the line faster after passing the ball, Flanagan added: ‘It is a tough one because he didn’t know the offload was going to come and the ball was going to come back to him.

‘But if you are standing in the line and the ball is coming back towards you, you have either got to get back behind the football or push through the line.

‘It is a really tough one, but I agree with that call.’ 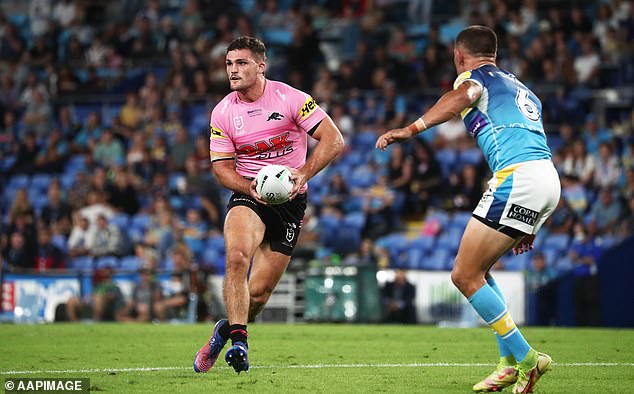 Cleary ultimately had the last laugh, leading the Panthers to a second half comeback

Cleary ultimately had the last laugh, as he inspired the reigning premiers to an eighth straight win with a sumptuous second half performance.

Trailing 4-0 at the break following Greg Marzhew’s try, the Panthers bounced back early in the second half when Cleary set up Izack Tago for Penrith’s first try, before crossing himself shortly afterward.

The halfback then set up Jarome Luai’s try four minutes time as the Panthers maintained their unbeaten start to the season.