The Tour de France was heading ‘behind closed doors’ as Covid-19 infection rates rose across France, after local officials stepped in to ban fans from the key climbs on Sunday’s mountain stage, to the summit of the Grand Colombier.

Rapid rises in infection rates of Covid-19 are now threatening to ensure that the race will enter its final week, heavily closed off.

Spectators have also been banned from all starts and finishes, as the convoy enters three days in the so-called ‘red zones’ of greatest infection.

‘Access will be prohibited,’ an official statement read. ‘No spectators, gatherings or demonstrations will therefore be allowed.’

Citing the ‘rapid deterioration of the health situation,’ the ban may well now be extended into all the mountain stages in the race’s climactic week.

Saturday’s stage from Clermont Ferrand to Lyon had been expected to end in a bunch sprint on the banks of the Rhone, but Danish rider Soren Kragh Andersen had other ideas, breaking away inside the closing three kilometres to frustrate the best laid plans of former world champion, Peter Sagan, who has yet to win a stage in this year’s Tour. 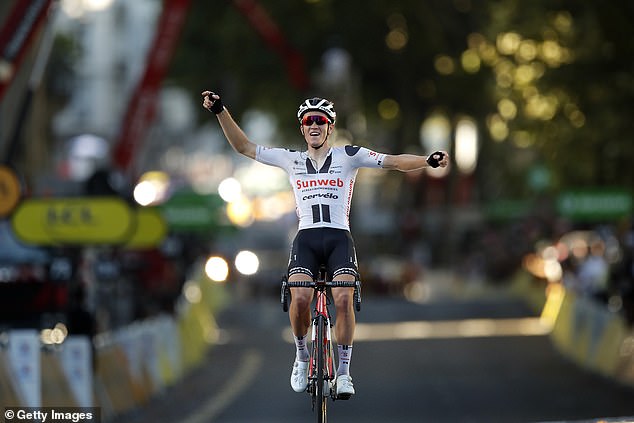 ‘I feel emotional,’ Andersen said after taking his first stage win in the Tour. ‘I dreamed about this but it’s hard to say that you’re good enough before you’ve done it.’

‘I had really good legs the whole day,’ the Dane added, ‘but you never know how good the other guys are. It took a long time in the Tour for me to have confidence in myself, but I knew that if I was suffering, then they were also suffering. I just went for it then.’