‘It won’t be a bad thing for him’: Ian Wright BACKS Gareth Southgate’s decision to drop Marcus Rashford for Senegal clash, despite clamour for in-form Three Lions forward to start after three goals in the group stages in Qatar

Despite being the team’s top scorer in the competition thus far, Southgate instead elected to start Phil Foden and Bukayo Saka alongside Harry Kane for the Three Lions’ first knockout fixture since defeat on home soil in the Euro 2020 final last year.

But, speaking on ITV ahead of the game, the former Arsenal star said Rashford’s omission was evidence of England’s depth in attacking talent.

‘Marcus will be disappointed not to start after the form he’s been in,’ Wright said.

‘Saka has been a good player for him. I think we’ve got one of the best benches in the competition. It won’t be a bad thing for Rashford. We need to pull their full backs back. The full backs have been really good in this tournament for Senegal.’

Fellow pundit Gary Neville said that the Manchester United star will get his opportunity off the bench. 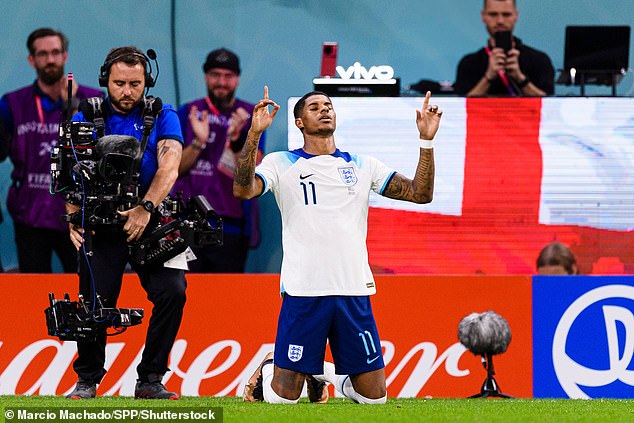 ‘He would have wanted someone on the bench who can come off the bench and be lightning quick. Unfortunately we can’t have Sterling so I think Rashford will be firs sub. I do think it disrupts them a little bit, but they have a strong front two.’

Speaking before the game, Southgate explained that Saka being chosen to start over Rashford was a tactical decision on his part.

‘Saka was excellent in our first two games, Rashford was also excellent but we’ve got an embarrassment of riches in that department. We’ve got to play to our strengths, show our resilience and experience. We’ve got to be there with the answers.’ 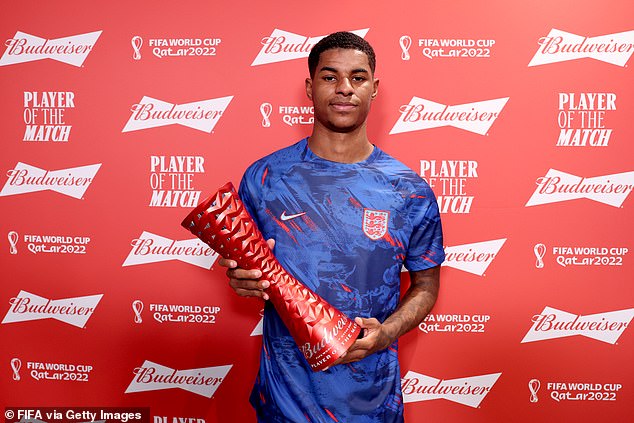 Rashford netted his first international goal at a major tournament in England’s World Cup opener after appearing as a second-half substitute as Southgate’s side commenced their campaign with a dominant 6-2 win over Iran.

Despite the goal, the 25-year-old was again limited to a substitute appearance in the team’s second outing in Qatar, coming off the bench in the closing stages as England stumbled to a disappointing goalless draw.

With England’s qualification to the knockout stage all but assured, the Manchester United star made his first start of the tournament in the final Group B clash against Wales. 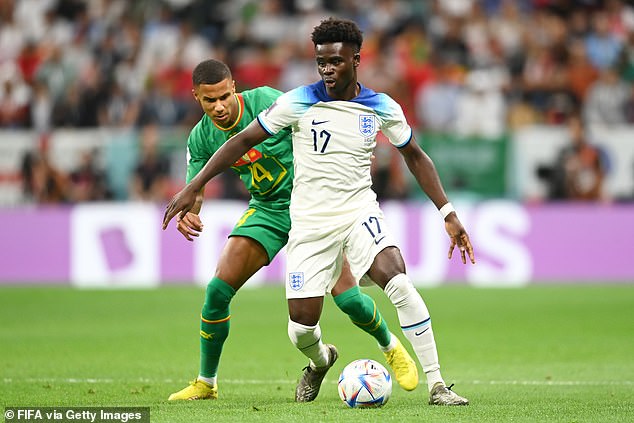 Rashford proceeded to open the scoring at the Ahmad bin Ali Stadium with a stunning free-kick, before adding another goal to his tally to secure England’s progression to the last 16.

However, with the Manchester United star relegated to the bench for the must-win fixture, fans took to social media to question Southgate’s decision.

Another user added: ‘Rashford can’t be dropped tonight surely, Southgate sacked on the spot if so guys criminal’

@James_Hardy questioned Southgate’s decision: ‘So he’s massively in form in the knockout stages and he’s been dropped, I don’t think Saka has done anything wrong either but Rashford should be playing IMHO’

A further user wrote: ‘Rashford dropped by Southgate after one of his best performances in an England shirt and our top scorer? Saka in and Rashford out?’

While @Bekimsejdija1 added: ‘Marcus Rashford dropped. Southgate doing what he does. Drop the in form players.’