Shocking footage captured the moment groups of men believed to be Wrexham and Oldham Athletic fans ran towards each other as police officers piled in to try and break up the chaos.

The hooligans could be seen violently punching and kicking each other in the middle of the street in Failsworth, Oldham in Greater Manchester.

The footage appears to be taken from a Tesco window, after fans reportedly poured out of The Millgate pub on Ashton Road West, Failsworth.

But the pub declined to comment on the brawl that took place this afternoon.

A staff member told MailOnline: ‘We can’t disclose any information about it.’

One report suggested that Wrexham fans could have in fact been fighting a far-right group. 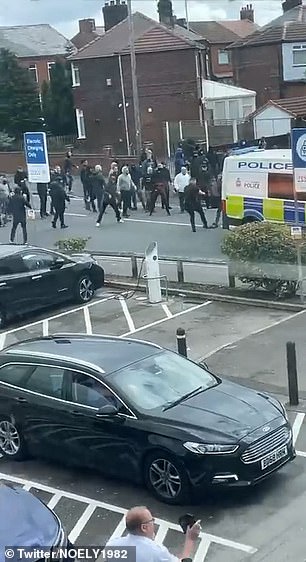 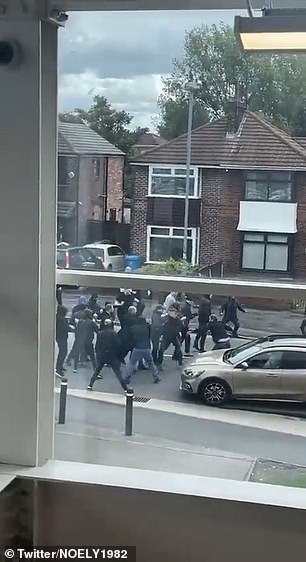 The video showed police officers storming in as football hooligans sprinted at each other, kicking and punching

Greater Manchester Police have been contacted by MailOnline for more information regarding the fight.

The area where the brawl took place is more than four miles away from Oldham’s home ground, Boundary Park, where Wrexham fans would watch their side steal a 95th minute winner, courtesy of Paul Mullin.

The social media user who posted a video of the footage, which he said was taken by his mother while she was at Tesco, said: ‘Wrexham on the right just come out of millgate’.

Reports at the scene suggest that fans were seen covered in blood as police vans could be seen arriving at the street brawl.

Social media users urged film star Reynolds to ‘have a word’ with his Wrexham fans while others warned people to be careful. 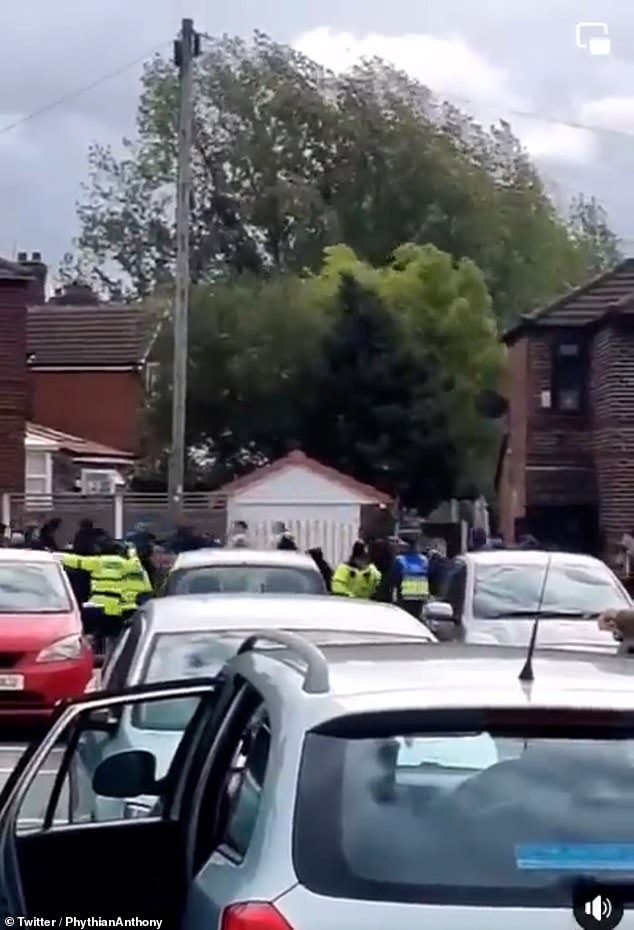 Police officers piled in after a massive street brawl broke out between football fans in Failsworth, Oldham in Greater Manchester 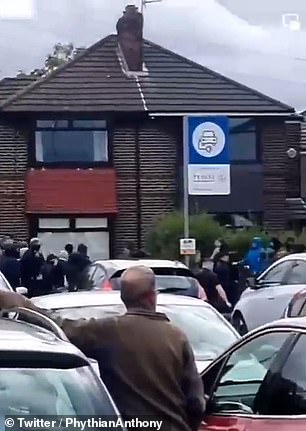 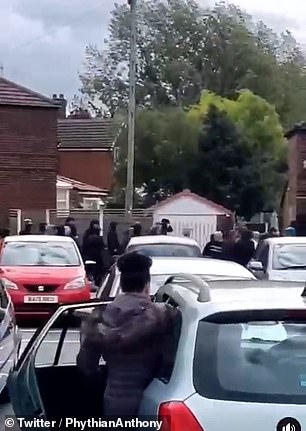 One user said: ‘Wrexham and Oldham fans kicking off in Failsworth. @VancityReynolds have a word’.

Meanwhile another said: ‘@VancityReynolds I see your boys are doing you proud’.

And a third added: ‘About 40 Wrexham fans in Failsworth already covered in blood and scrapping with Oldham fans. Please be careful today everyone! #oafc’.

In other footage taken from a car, sirens could be heard as football fans continued to run down the street while officers tried to take control of the situation.

Some social media users called on Ryan Reynolds to ‘have a word’ following the fight while others joked that they had just watched the recent episode of Welcome to Wrexham which discussed hooliganism. Another suggested that fans were ‘covered in blood and scrapping’

The violent brawl comes just days after Reynolds and McElhenney’s Welcome to Wrexham series, which documents their incredible takeover of the club, discussed football hooliganism.

Episode 10 shines a spotlight on the issue following a clash between Wrexham fans and Torquay United supporters in October, 2021 when objects were thrown in the crowd.

The episode features Wrexham supporter Mike Jones who was attacked by his own fans at a train station on the same fateful day that supporters clashed at the Racecourse ground last year. 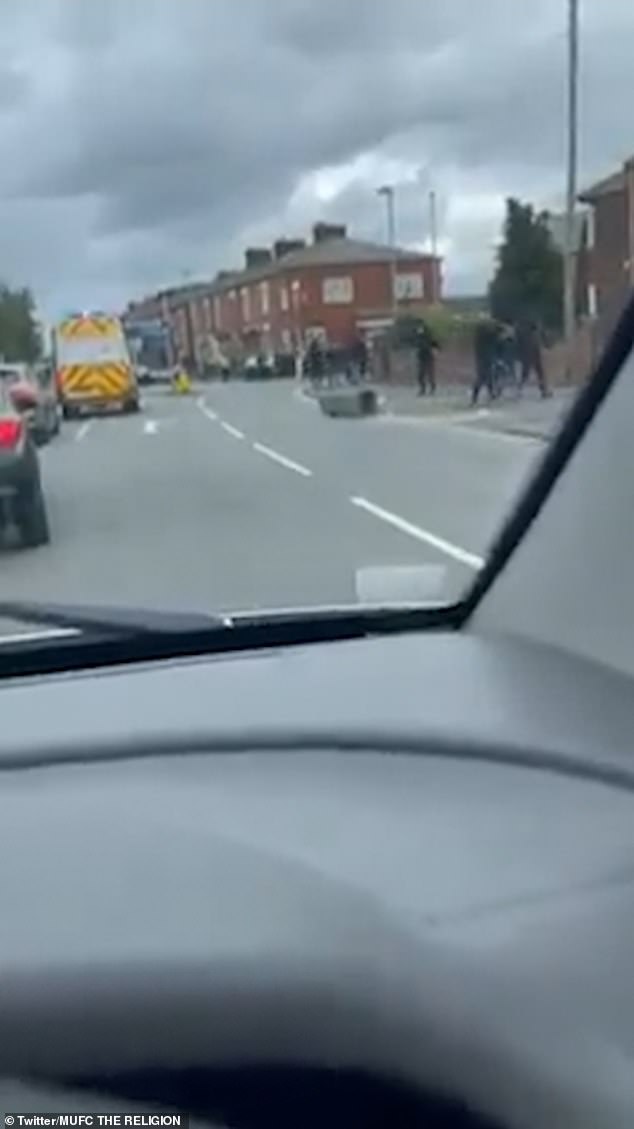 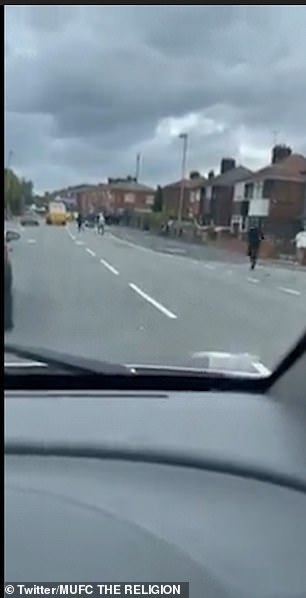 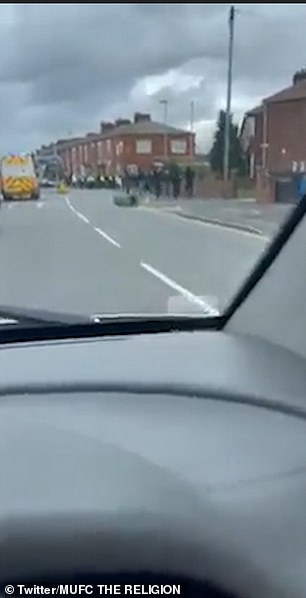 The footage taken from a car showed the fans clashing, just days after Ryan Reynolds and Rob McElhenny discussed hooliganism on Welcome to Wrexham

The series also looks into the dark side of hooliganism, including an interview with Johnny Taylor who discusses his time in the ‘Wrexham Frontline’ which led him to being banned from within a mile of the stadium.

He is also prohibited from being in any town centre pub on a matchday. He reveals that he ‘loved it’ at the time.

The first ever episode showed the Hollywood stars trying to win the support of the Wrexham Supporters Trust to buy the club. 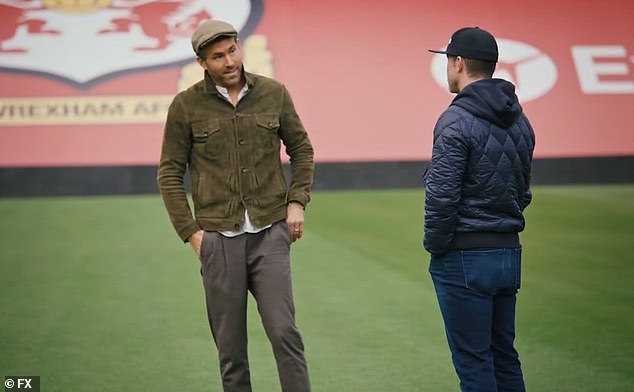 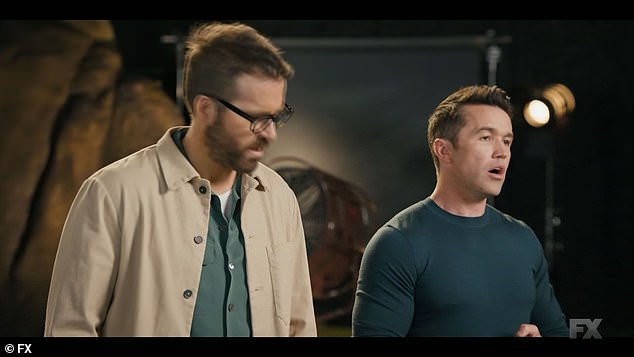 They needed at least 75 percent of the vote to acquire the club and gained 98 percent approval on the three resolutions giving them control.

Deadpool star Reynolds and It’s Always Sunny in Philadelphia actor McElhenney took over the North Wales club in February, 2021 after making a £2 million ($2.76 million in USD) investment in the club.

Wrexham went into today’s game second in the league after a run of seven unbeaten games but tensions were running high as fans brutally clashed.