Christian Pulisic has been praised by fans after an impactful substitute appearance Saturday, as the American came off the bench to assist Conor Gallagher’s stunning Chelsea winner vs. Crystal Palace.

The American winger played just over 10 minutes after not entering the match until the 84th minute, but made his presence felt as he drove in from the left and supplied the pass for Gallagher’s decisive strike inside the 90th minute.

Pulisic has now started just one of Chelsea’s opening seven matches, but fans were quick to speak of his quality – and question that of a teammate’s – after the tidy assist. 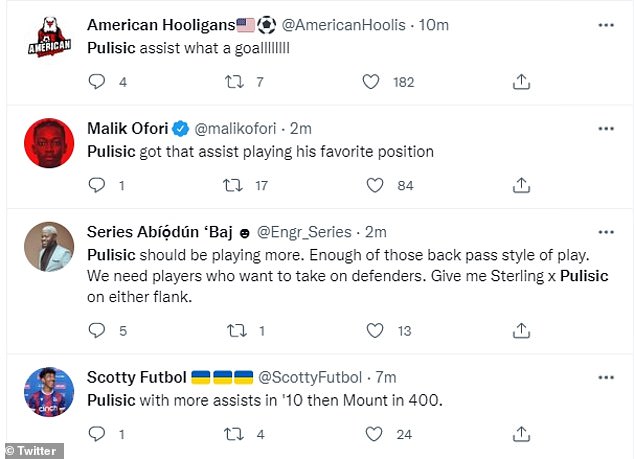 ‘Pulisic playing on his favoured left side & immediately gets an assist. It was never rocket science,’ one fan said on Twitter.

‘Pulisic should be playing more. Enough of those back pass style of play. We need players who want to take on defenders. Give me Sterling x Pulisic on either flank,’ another said.

‘Pulisic with more assists in 10 [minutes this game] than Mount in 400 [this season],’ someone else pointed out.

The American has largely settled for sub appearances this season at Stamford Bridge, but could be given a lifeline by new manager Graham Potter.

He started just 13 league games last season and was used all across the front line at times by Tuchel, failing to nail down a regular role. 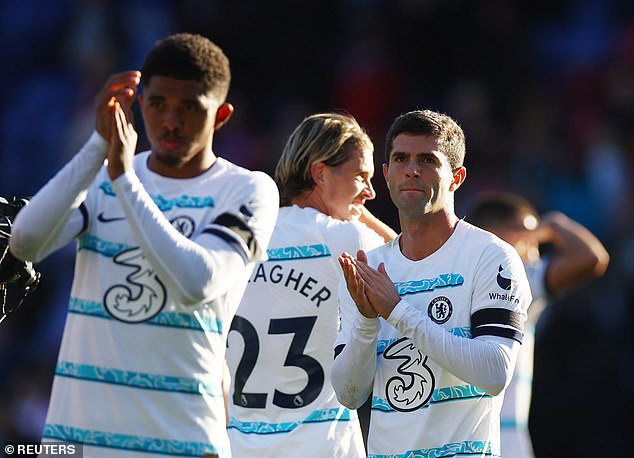 Christian Pulisic entered the game in the 84th minute vs. Crystal Palace on Saturday

‘I can only comment on him in terms of how he’s been with me,’ Potter said at a Friday press conference, hinting at Pulisic’s sometimes frosty relationship with former manager Thomas Tuchel.

‘Really positive, he’s an intelligent guy, articulate, knows how to express himself. My conversation with him has been good and positive, I’m not going to judge anybody on what has happened in the past, I’m going to make my own mind up. Football hopefully decides.’

The American continues to be linked away from the club, with AC Milan reportedly eyeing him as a Rafael Leao replacement.

Repeat acts of Saturday’s assist, however, would certainly help his status at Chelsea at least in the meantime.