‘He just sent him back to Liverpool with that skill’: Fans mock Philippe Coutinho after forward is completely fooled by Argentina defender Juan Foyth’s body-feint

Philippe Coutinho was left red-faced on the big stage this week, after falling for a sumptuous piece of skill during Brazil’s Copa America clash with rivals Argentina.

With the stakes sky high, Brazil took on their old foe for a place in the showpiece final, and Coutinho was perhaps a little too eager for the occasion.

While looking to adopt a high press which became second nature to him at Liverpool, Coutinho bore down on defender Juan Foyth… only to disastrous result. 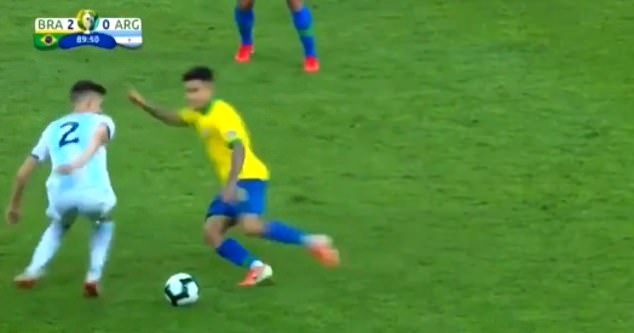 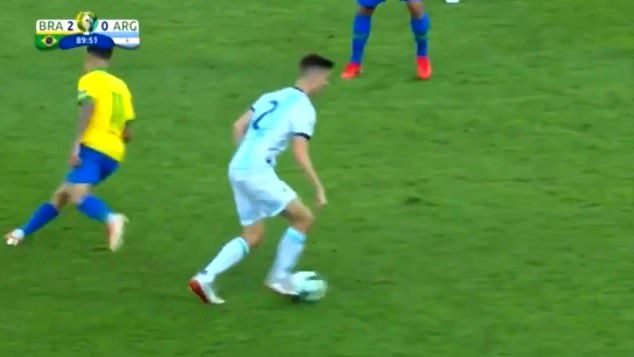 Completely sending Coutinho the wrong way, Foyth was able to dribble away into space

The Tottenham man was seemingly expecting the pressure, and pulled off a sublime body-feint by throwing his weight to the left before effortlessly dribbling right.

Coutinho fell for the nifty little trick hook, line and sinker, and could only jog away as Foyth walked the ball into open space.

With fans around the globe glued to the action, it did not take long before social media was awash with snarky comments aimed in Coutinho’s direction.

‘This body-feint from Foyth is absolutely quality,’ wrote one fan while posting a short clip of the action.

‘He just sent Coutinho back to Liverpool with that skill,’ they added.

‘Sent him for the Sunday Times on a Wednesday,’ added another.

While Coutinho may have felt momentary embarrassment, the Barcelona star had the last laugh when it came to the scoreline. 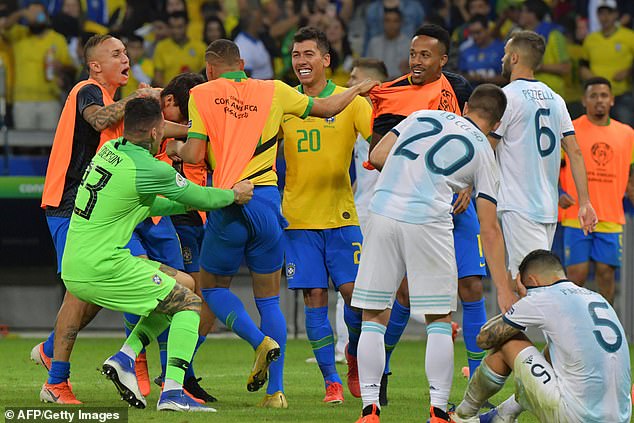 Brazil and Coutinho had the last laugh in the game, as a 2-0 win booked a place in the final

Brazil emerged 2-0 winners in the match, courtesy of goals from Gabriel Jesus and Roberto Firmino.

Tite’s side have booked their place in the Copa America final as a result, and will face either Chile or Peru.