Naya’s body was recovered on Monday after she disappeared during a lake outing with her son last week. The day also marked the seventh anniversary of Cory’s death.

Lea and Cory were dating when he passed away in 2013 from an accidental drug overdose. He was 31.

The first image Lea shared showed Cory holding a bouquet of flowers while standing on a bridge in Central Park, New York.

The next photo she shared showed Naya looking camera-ready and gazing down while seemingly hanging out backstage during their time on Glee.

A third snap was of Lea, Naya and several other Glee stars sitting on a bench overlooking the beach. 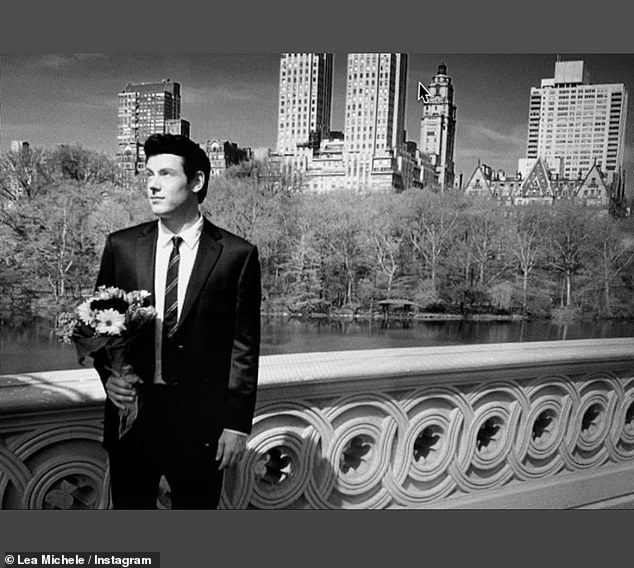 Lost love: Lea shared this black and white snap of Cory, who she was dating at the time of his death from a drug overdose in 213 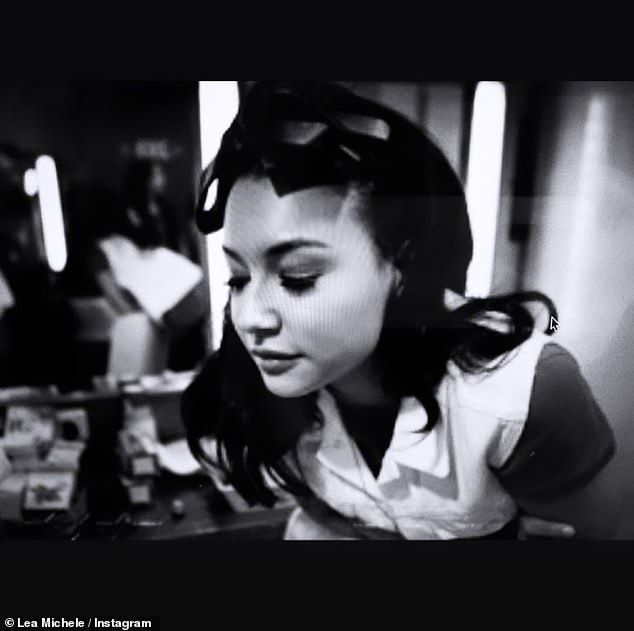 Costar: Lea, who deleted her Twitter account in recent days, posted this photo of Naya from their time on Glee 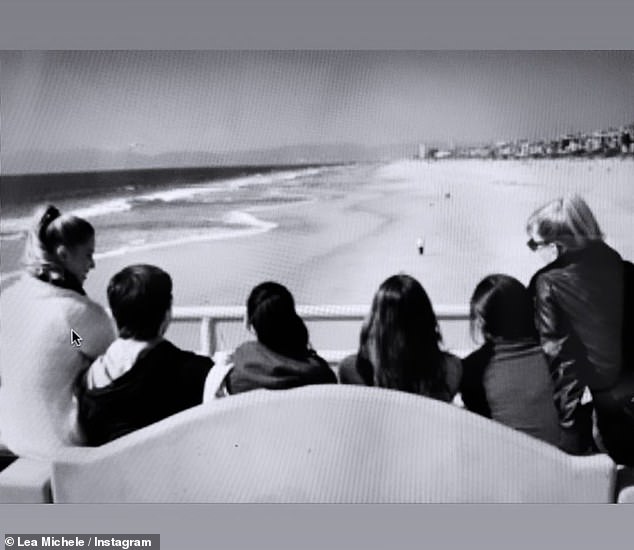 Memories: A third photo showed Lea with Naya and other Glee stars on a bench overlooking the beach

The 33-year-old actress, who is currently expecting her first child, didn’t share a message with the photos.

It’s been a rough few weeks for Lea following accusations of bullying on set of the high school musical series, which wrapped in 2015.

She deleted her Twitter account after allegedly receiving abusive messages from fans of Naya following her disappearance on July 8.

Naya accused Lea of hostile behaviour during their Glee days in her 2016 book Sorry Not Sorry, however, they seemed to be on good terms in recent months.

Meanwhile, ‘7 years without Cory’ started trending on Twitter on Monday as fans honored the tragic actor while also praying for the safe return of Naya – hours before the tragic news broke that her body had been discovered in the lake and she likely drowned. 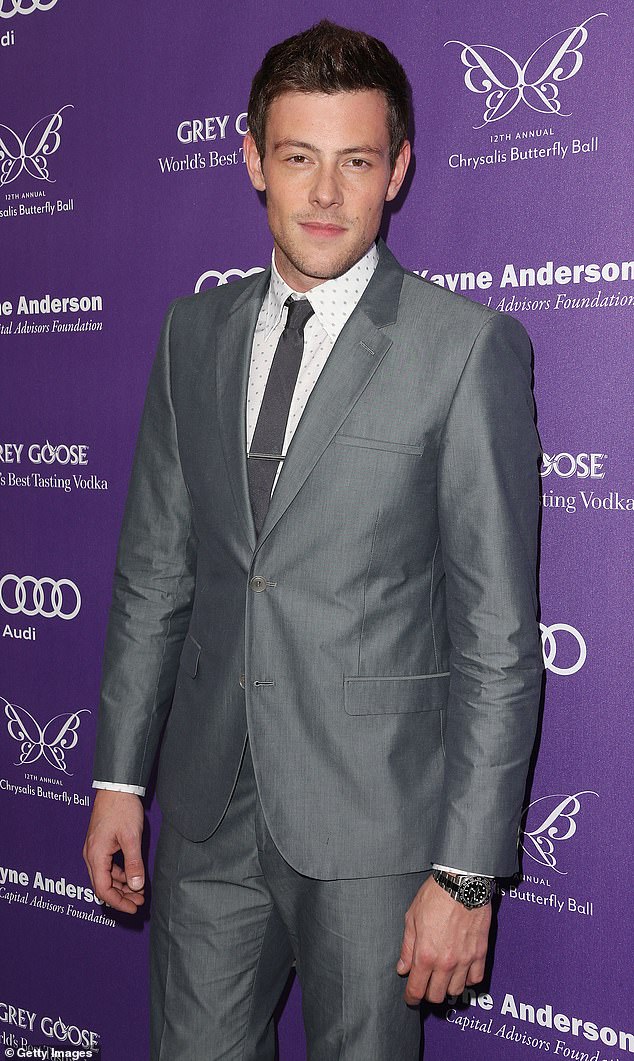 Fan tributes came pouring in for Cory on the seventh anniversary of his death. The actor passed away aged 31 in 2013 after an accidental drug overdose

‘Tough day for the Glee fam. Today marks 7 years without Cory. As much as I’m hurting, I am choosing to celebrate Cory’s life today. Watching some of my favorite videos, scenes, and interviews of his. We all miss you.’ one fan wrote.

Another tweeted, ‘can’t believe today is 7 years without cory. honestly still remember that night like it was yesterday, but it also feels like a lifetime ago. it still hurts’

‘7 years without Cory. I still miss this sweet soul and big goofball. He brought so much light around him. I am also praying today for Naya that she is finally found.’ read another tweet. 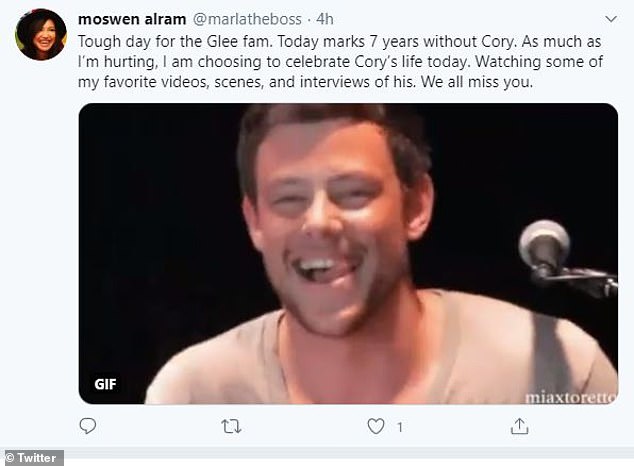 Miss you: Fans reminisced about the actor and spent the day watching clips of the Glee star

When news broke that Naya’s body had been recovered at the Lake Piru, where she went missing on July 8, fans expressed their shock on social media.

‘So sad that its been confirmed Naya has passed away and 7 years today since Corys passing. Now there [sic] both shining stars and angels in Heaven, Sleep tight an Godbless #RIPNayaRivera #NayaRivera #CoryMonteith.’ one person posted on Twitter with a photo of the costars placing a star on a Christmas tree.

‘My heart breaks for her family and all her friends and to be found on this day holds pain still for many as cory monteith was found dead :(‘ came another message.

‘The fact that Naya’s body was found on the same day Cory Monteith died is shaking me to my core.’

Cory played Finn Hudson on Glee from 2009 up until his sudden death. 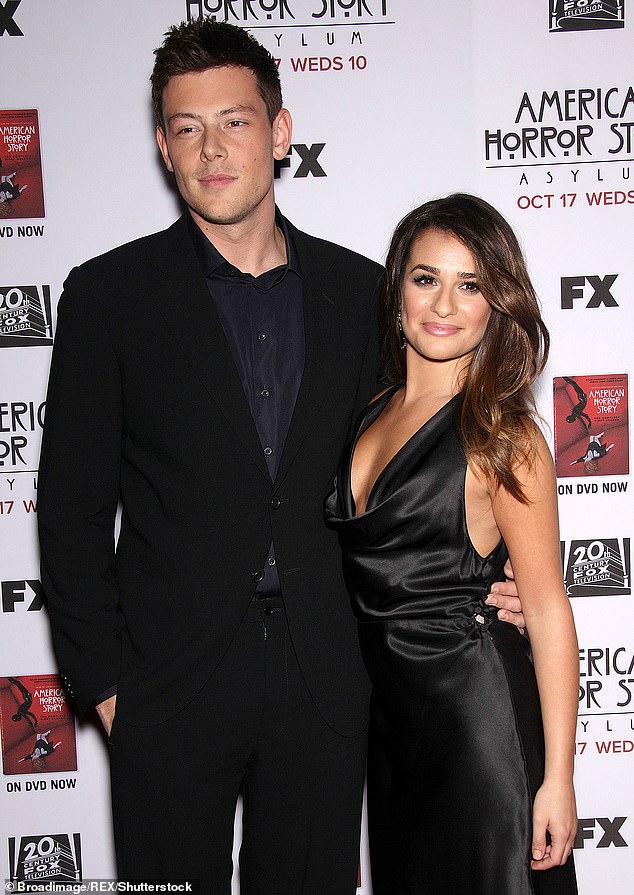 Monteith, who was dating costar Lea Michele at the time of his death, was found unresponsive in a hotel room in Vancouver after an accidental heroin overdose. The couple are pictured in 2012 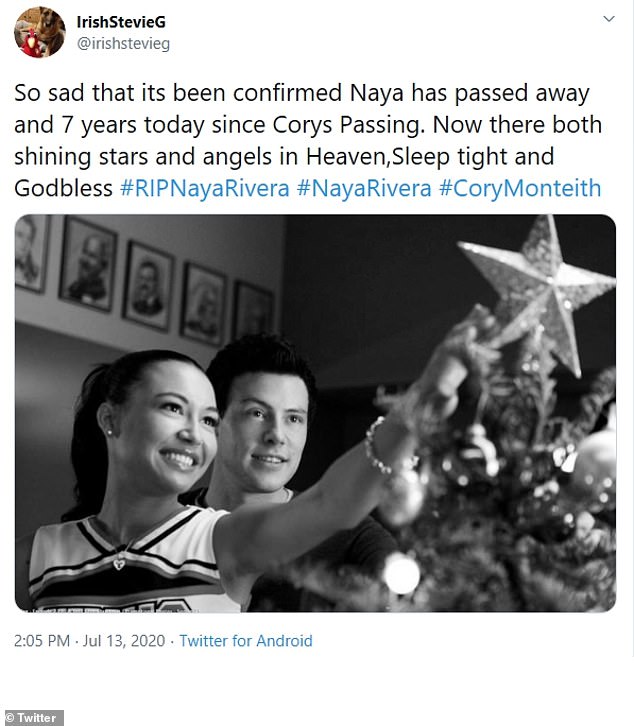 Not okay: This person, like many fans, were shocked that the discovery came on the seventh anniversary of Cory’s death

The actor was found unresponsive after failing to check-out of the Fairmont Pacific Rim hotel in Vancouver.

The preliminary autopsy report stated that Monteith died from ‘a mixed drug toxicity’ consisting of heroin and alcohol. He also had morphine and codeine in his system.

Naya – who played Santana Lopez on Glee during its six season run – disappeared during a boating outing with her son Josey, four, last Wednesday at Lake Piru just north of Los Angeles.

After she failed to return the pontoon, one of the rental staff discovered Josey on the watercraft asleep but the actress was nowhere to be seen. 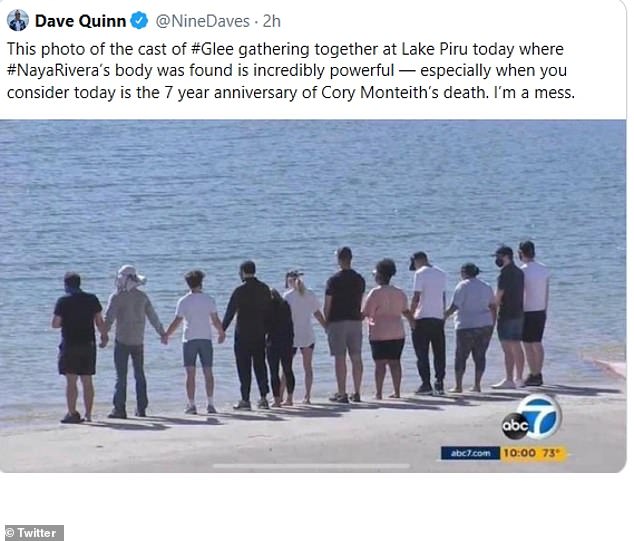 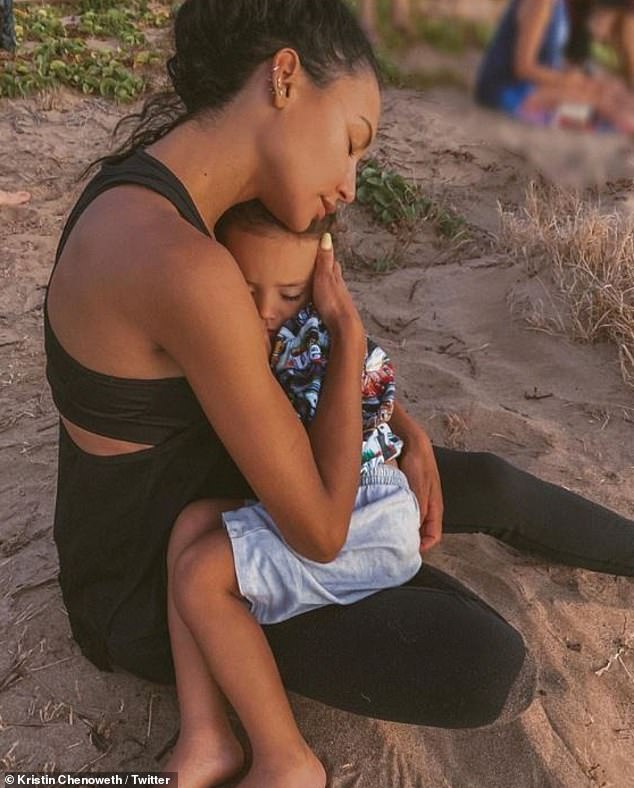 Naya disappeared during a boating outing with her son Josey, four (pictured together earlier this year) last Wednesday at Lake Piru just north of Los Angeles

When interviewed by authorities the toddler said Naya, 33, had gone swimming but not made it back onto the boat.

On Monday Ventura County Sheriff Bill Ayub confirmed Naya’s body had been recovered from the lake.

Another Glee alum, Mark Salling, who played Puck on Glee, killed himself in 2018 after pleading guilty to possessing child pornography. 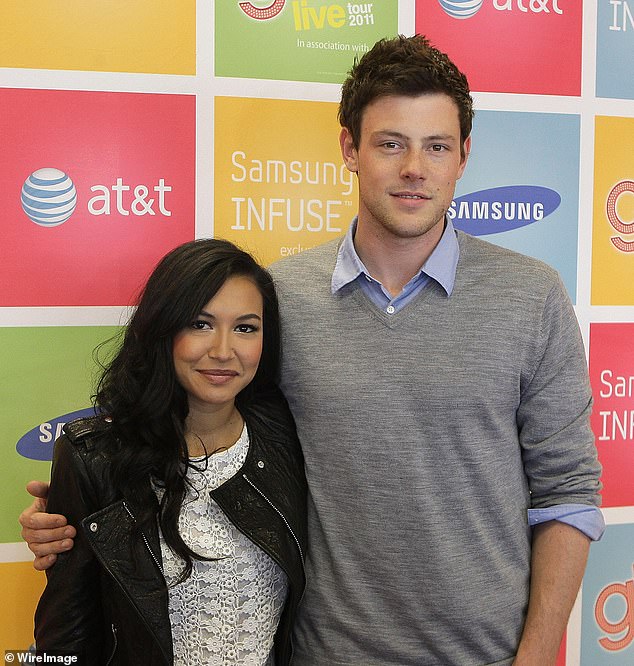 Gone too soon: Naya played Santana Lopez on Glee during its six season run and Cory played Finn Hudson from season one up until his sudden death in 2013 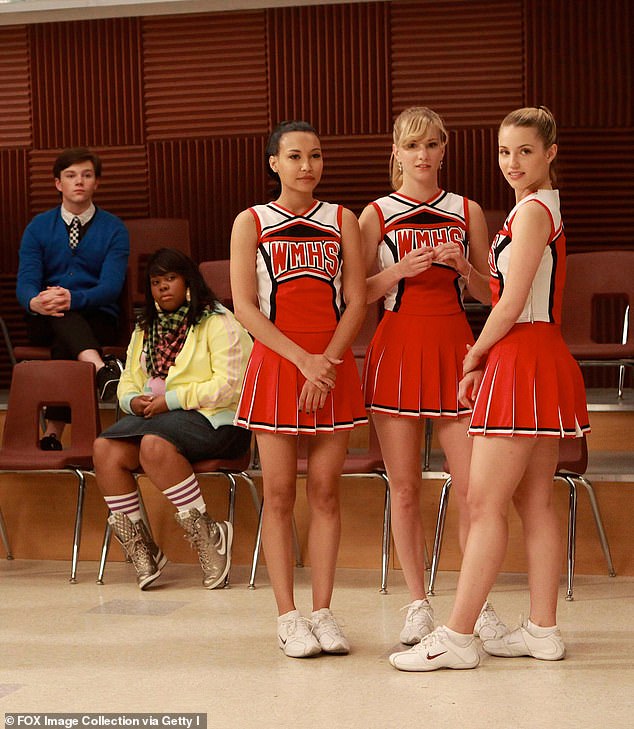