‘The ultimate Mr Champions League’: Fans full of praise for Cristiano Ronaldo as he registers brilliant assist for Mario Mandzukic and becomes the first player in the competition to win 100 games

Even when he doesn’t score Cristiano Ronaldo is breaking footballing records, and fans have been full of praise for him as usual.

He’s already the highest scoring player in Champions League history, and on Tuesday, he became the first player in the history of the competition to reach 100 wins.

Juventus beat Valencia 1-0 with a goal from Mario Mandzukic, but it was all thanks to a brilliant assist from Ronaldo. 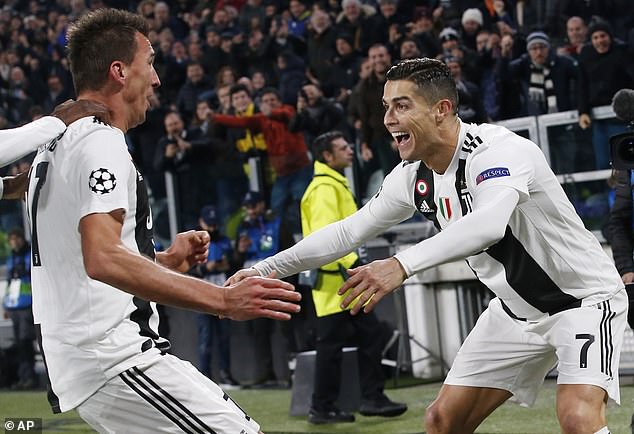 Picking the ball up inside the box, a quick stepover took him away from Gabriel Paulista and gave him enough space to fizz the ball across to Mandzukic for a simple tap in.

Another moment of magic from the Portuguese might have given Mandzukic another goal, but after a spectacular piece of chest control and another cross, the Croatian couldn’t add to his tally.

So far for Juventus Ronaldo has 10 goals, and Tuesday night’s assist takes him up to six, meaning he’s been involved in 16 goals in 17 games for the club since joining in the summer.

Ronaldo’s skillful play lit up Twitter as usual, with one person dubbing him ‘The ultimate Mr. Champions League.’

Another said: ‘Name that league after him. What else do we wanna see that he hasn’t done. Go on, name it.’

The 33-year-old is likely in the final few years of his career, but fans don’t think he’s on the way out just yet.

‘Fair to say his feet are still pretty quick!’ Said one Twitter user, with another adding: ‘goats still got it,’ with goat referring to Ronaldo as the Greatest Of All Time.

Juventus have now qualified for the next round of the competition, along with Manchester United from Group H.