Fans rave over Jadon Sancho’s performance for Dortmund that prompted his own team to brand him ‘incredible’… now he’s coming for Tottenham in the Champions League on Wednesday (where he could be the best English player on the pitch!)

Jadon Sancho produced a mesmeric performance for Borussia Dortmund on Saturday afternoon to give Tottenham huge concern ahead of their Champions League clash on Wednesday night.

The 18-year-old scored one and set up two goals in a scintillating attacking display as Dortmund surrendered a three-goal lead to draw with Hoffenheim at Signal Iduna Park.

His display will have given Mauricio Pochettino and his Spurs players huge concern as Dortmund travel to Wembley next week for the first leg of their European last-16 tie. 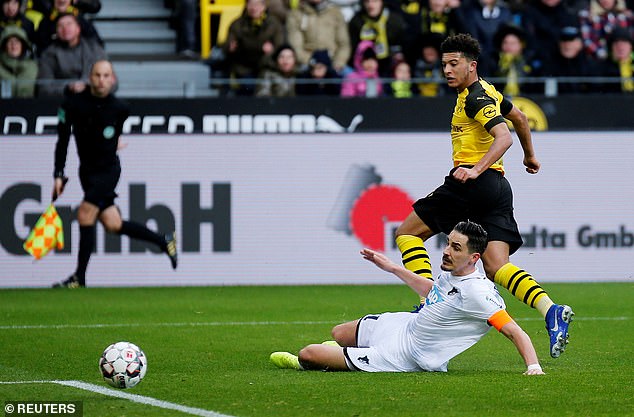 He may well be the best Englishman on show under the lights at Wembley as Harry Kane and Dele Alli are both set to miss out for the Premier League side.

Sancho burst into life in the first half against Julian Nagelsmann’s side, firing in for the lead and slicing through the hapless Hoffenheim defence at will just moments after having a goal disallowed.

He picked the ball up on the edge of the penalty area before knocking it out his feet and unleashing a low drive into the opposite corner that left the goalkeeper helpless.

Sancho, at 18 years and 321 days, is now the youngest player to score eight Bundesliga goals in his career. 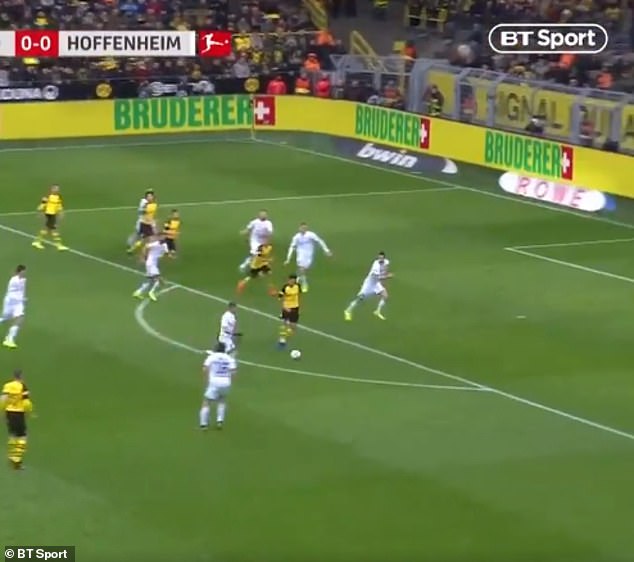 Sancho burst into life in the first half against Julian Nagelsmann’s side, firing in for the lead 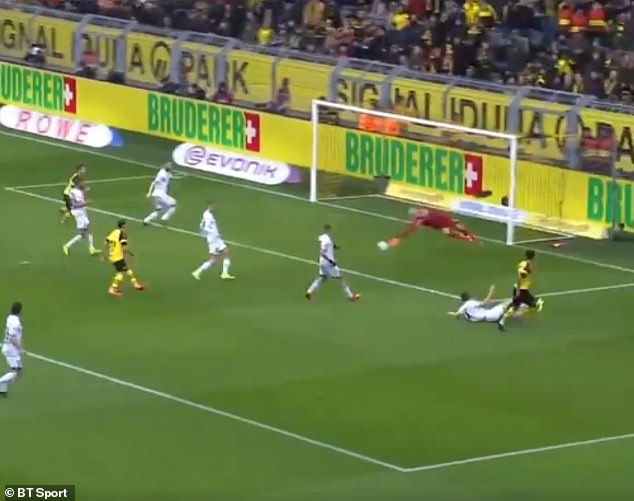 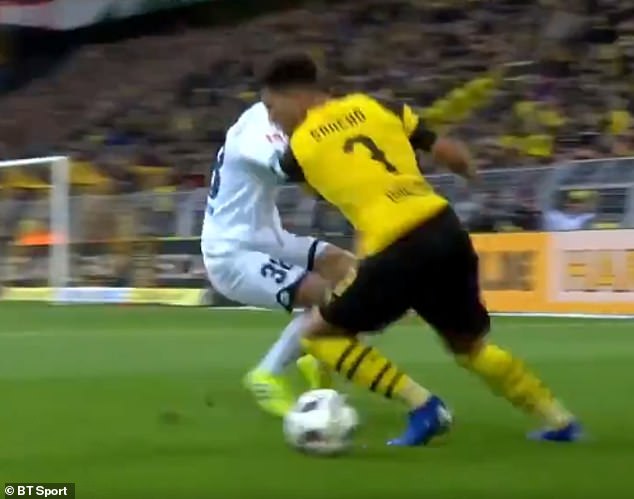 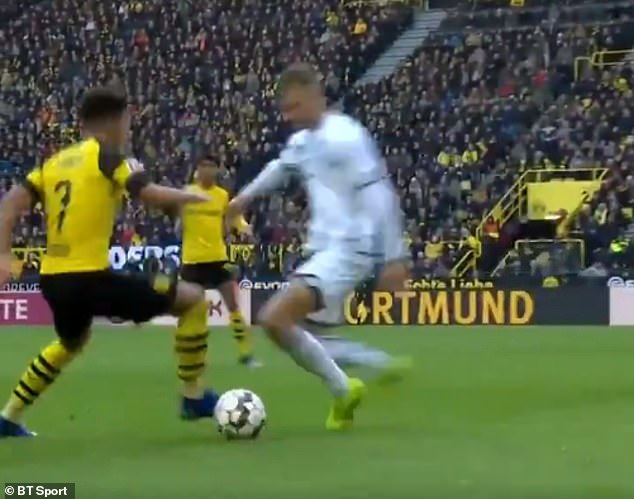 Just moments later he bamboozled a Hoffenheim defender with a series of lightening tricks and flicks on the right wing before leaving him for dead and passing to a team-mate.

The England international then played another pivotal role in Dortmund’s second of the afternoon by teeing up Mario Gotze before also having a huge hand in their third.

Played in down the right channel, Sancho produced an inch-perfect backheel into the path of the onrushing Gotze, who squared across goal to Raphael Guerreiro for an easy tap-in in the 66th minute.

Sancho almost got a second goal in the 75th minute but his low shot hit the post and bounced clear before the hosts stepped off the gas, allowing Ishak Belfodil to cut the deficit. 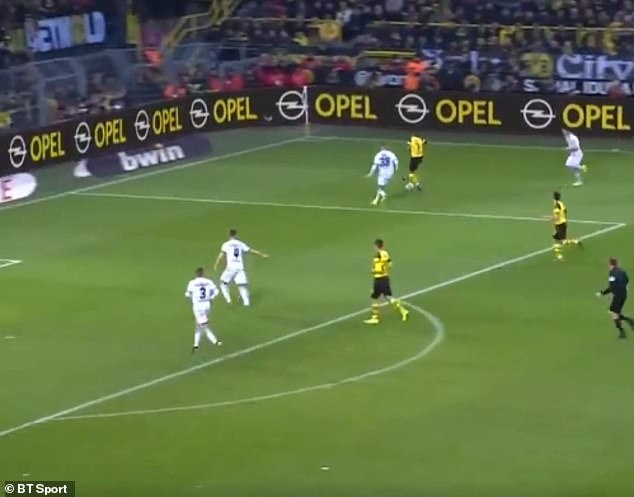 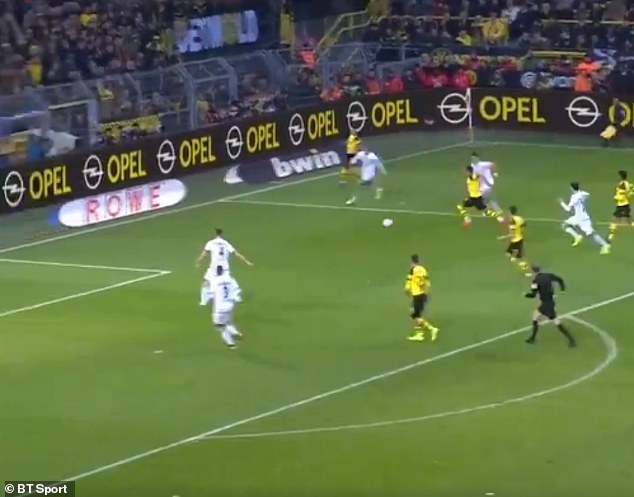 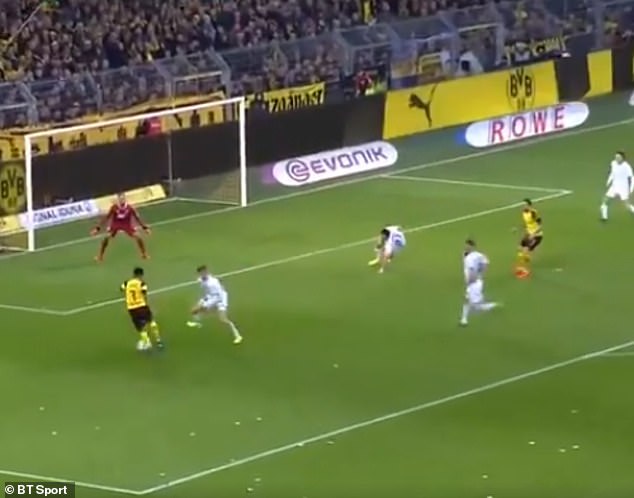 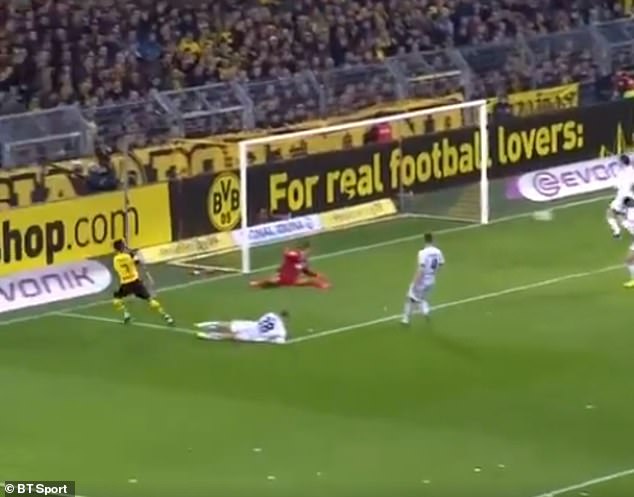 Pavel Kaderabek gave Hoffenheim a lifeline when he rose over his marker to head in with seven minutes left and set up a nervous finale.

The visitors’ memorable comeback was complete when Belfodil headed in a free kick in the 87th.

@samdunks23 was in agreement. He tweeted: ‘What a future this guy has. Cracking player with so much confidence. Class to see.’

@lukestokes84 slammed Manchester City for letting him leave for Germany, declaring: ‘Absolutely class player. How could City let him slip through? Should have been playing for them now. So glad he is English because this is a serious player.’

He told The Sunday Mirror: ‘I’m not surprised about his performances.

‘I’m surprised how fast he managed to get on this senior level because, before that, he only played in youth teams.

‘And also his stability in performing well. During last autumn he nearly played each game and always at a high level. For this age je can still play in our Under-19 team! He’s still a youth player in our terms – that’s unbelievable.

‘He’s very robust, very strong. For his age, he is outstanding.’