They endured a tough night in the kitchen on Sunday night.

But it didn’t end there for My Kitchen Rules contestants Emily O’Kane, 27, and Alex Clark, 36, as they were savaged on social media over their choice of ‘budget’ meal.

Droves of fans flocked to Twitter to question the amateur chefs’ decision to serve up an extravagant plate of salmon and asparagus as their cheap and cheerful dish.

‘My anxiety is going through the f**king roof!’ My Kitchen Rules’ Emily (pictured) EXPLODES at her boyfriend Alex during the cooking challenge… before breaking down in tears

After the challenge, one viewer vented: ‘Since when is salmon a budget meal?’

This sparked a flurry of comments, with another adding, ‘this is complete bullsh*t! Salmon & asparagus are most definitely NOT budget meal ingredients.

One fan went even further, questioning if the pair should have even been allowed to stay in the competition.

‘I am seriously annoyed that Alex & Emily advanced to the cook off,’ she vented.

‘And weren’t picked-up on their use of salmon as a ‘budget’ ingredient. I’m not sorry about this, but they should not have advanced.’

Not a budget meal! The couple were savaged by fans on Twitter, many complaining that salmon is not cheap

Not fair! Twitter users were furious about the ‘cheap’ challenge

You for real? Fans weren’t impressed, with some even going as far as to say they should not have advanced 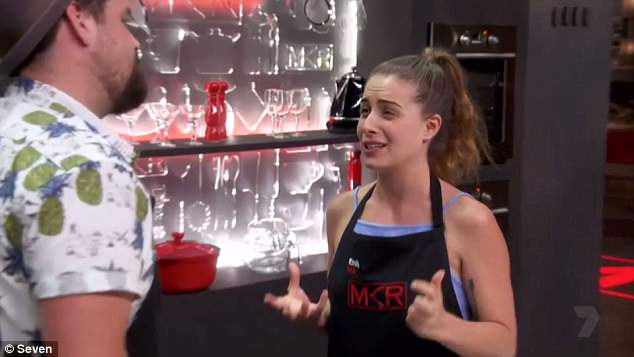 Oh dear: The pair, who are known as the ‘cocktail couple’, stressed while preparing Sunday night’s dish, with Emily overwhelmed at one point and breaking down in tears

The pair, who are known as the ‘cocktail couple’, stressed while preparing Sunday night’s dish, with Emily overwhelmed at one point and breaking down in tears.

Emily exploded at her boyfriend after they left plating to the last minute, which also caught the ire of viewers.

‘You cannot leave this to the last minute,’ Emily began, before adding: ‘My anxiety is going through the f**king roof! I’m being serious okay, please!’

Despite getting their dish on the plate, Emily cried from the stress, which prompted Alex to tell her to ‘take a deep breath’ and ‘keep it together.’

Users on Twitter, however, weren’t such big fans of the couple’s antics.

One viewer wrote: ‘I hate that Emily basically abuses Alex and is then rewarded for it? Idk if I’m the only one feeling this way.’

Another posted: ‘I’m so over Alex and Emily. Who agrees? #MKR’

The couple made it to the semi-finals and will stay in the competition with a chance to win $250,000.

My Kitchen Rules continues Monday at 7:30pm on Channel Seven

Out of touch? Fans got pretty riled on the social media during the episode

Not happy! A number of Twitter users took to the social media platform to savage the pair