On Thursday night’s episode of The Bachelorette the remaining suitors battled it out for time with Sophie Monk.

In order to score coveted one-on-one time with the star, the men competed against one another in the ‘Real Man’ games.

But some viewers weren’t pleased with the group date challenge, and took to social media to slam the show for its ‘sexist’ competition.

‘Gross’: After The Bachelorette featured stereotypical challenges on Thursday night’s episode to prove the suitors were ‘real men’ worthy of Sophie Monk’s love, viewers took to Twitter to slam the show

The suitors were tasked with being the best at gender-stereotypical activities such as building cupboards, changing tyres and making fire which angered The Bachelorette viewers.

Fans slammed the show in droves, with one social media user writing: ‘Didn’t realise (in 2017) that only men changed tyres and women stayed in kitchens. Thanks Batch; catch up.’

Another added: ‘Oh wow this episode is totally going to be a toxic sexist masculinity sh*tfest’.

One person joked about the arguably offensive task, writing: ‘Real Man? Is there some kind of Fake Man epidemic going on that I’m not aware of?’

‘Is there some kind of Fake Man epidemic going on’: Some fans poked fun at the premise while others were just angry

Taking a jab at The Bachelorette’s catchphrase as well as the ‘sexist’ challenge, one viewer commented:  ‘Will you accept this toxic masculinity?’

Elsewhere, others thought the show was throwing back to outdated ideals.

‘When the The Bachelor says she wants ‘A real man that can do manly things Like fix things’ The 50s have called they want your ideals back,’ they wrote.

Someone else pointed out that both The Bachelorette and the male-led version, The Bachelor, could be seen as questionable.

‘The #TheBachelorAU and #BacheloretteAU group dates may be sexist, but at least they’re equal opportunity sexist,’ the person wrote, alluding to a challenge where female contestants had to show off their mothering instincts. 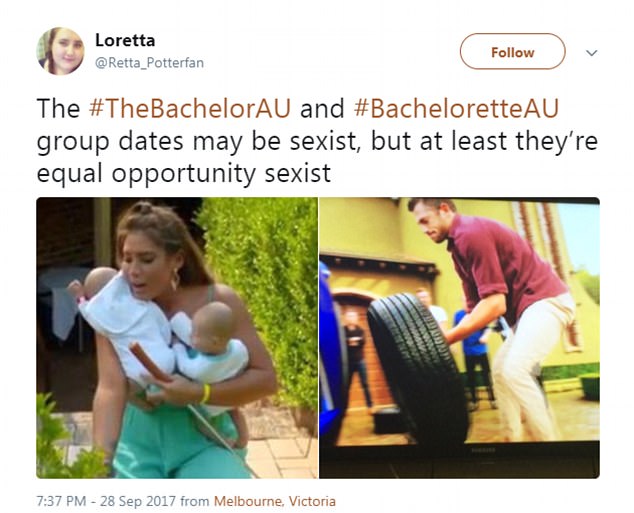 ‘The 50s have called’: Some fans pointed out the outdated ideal while others noted that the male-led Bachelor had just as sexist tasks

Echoing the sentiment was another Twitter user who posted: ‘Nah, This ‘real man bullsh*t is not okay. GFY #BacheloretteAU”

Several fans seemed disgusted by the portrayal of gender roles on the dating reality show.

‘This ‘real man’ shit is pretty gross tbh #BacheloretteAU,’ one wrote while another added: ‘I would also like to say how much I hate bullsh*t gender stereotypical things. ‘Any real man worth his salt’ SHUT UP.’

Another posted Gif of a person saying ‘enough’ and captioned it, ‘Stop going on about this real man BS’. 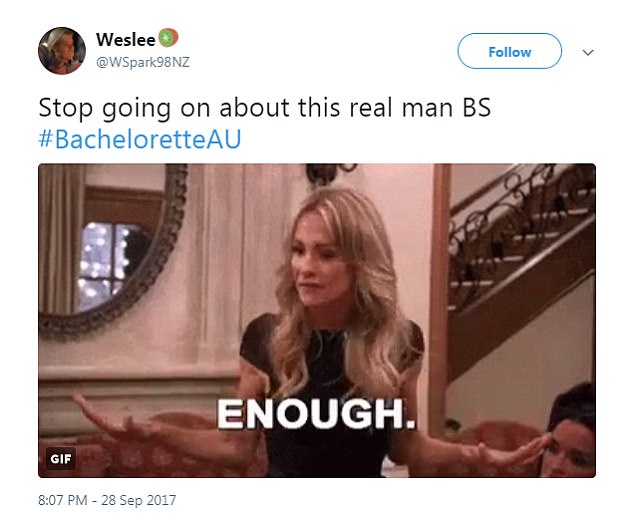