Football fans attempted to block Liverpool’s team bus from arriving at Elland Road for their game against Leeds.

Twelve clubs across Europe, including the Merseysiders owned by John W. Henry’s Fenway Sports Group, announced the launch of a breakaway tournament that would replace their European commitments with UEFA, such as the Champions League.

And fans from both sides protested against the proposals before the game got underway. 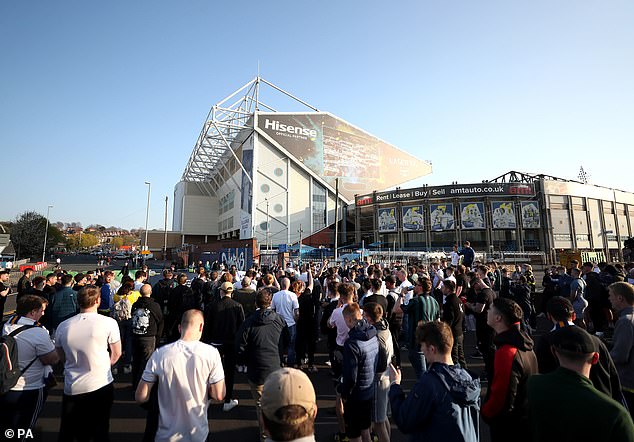 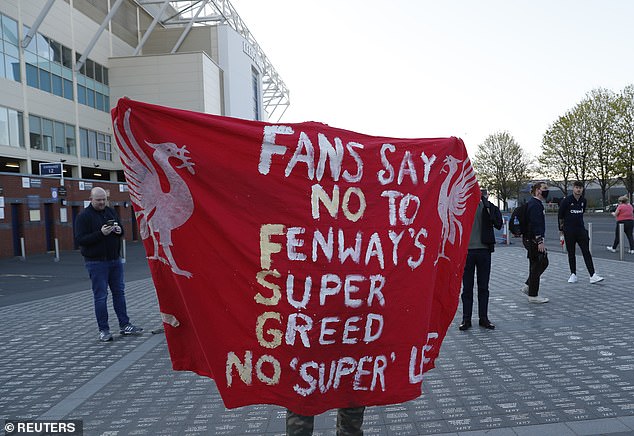 Fans who could have been from either club ran in front of the bus as it was arriving to Elland Road in an attempt to block it from going to the stadium.

Leeds and Liverpool also gathered together to hold up banners expressing their feelings on the prospect of a European Super League.

The new Super League plans have been highly criticised, mainly due to the rule that the same 15 clubs will automatically qualify for the tournament irrespective of their performances in the domestic league.

One banner from an angry Liverpool supporter read: ‘Fans say no to Fenway’s Super Greed (FSG). No Super League.’

Another banner unveiled by supporters read: ‘Love for the working class game, ruined by greed and corruption! RIP LFC. Thanks for the memories’

Other banners outside the ground read: ‘RIP Football 1863-2021’ and ‘Fans before finance’.

Leeds United fans also produced a banner inside their Elland Road stadium on Monday night that read, ‘Earn it on the pitch, football is for the fans.’ 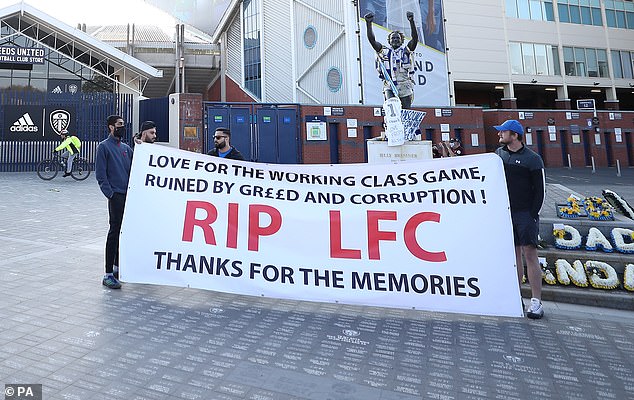 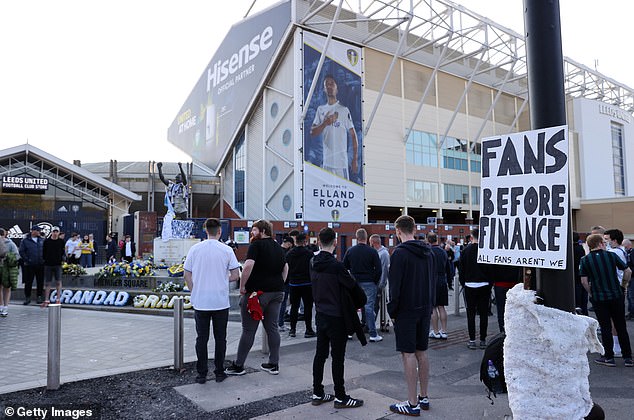 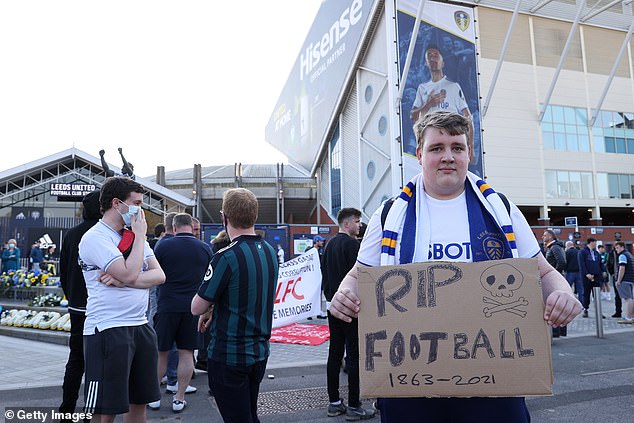 Another banner contained a quote from Leeds manager Marcelo Bielsa which said, ‘One of the reasons football is the most popular sport in the world is because the weak can beat the powerful.’

Liverpool agreed to join the Super League along with Manchester clubs City and United and London clubs Arsenal, Chelsea and Tottenham.

The tournament, which Real Madrid, Atletico Madrid, Barcelona, Juventus, AC Milan and Inter Milan have also signed up for, will see 15 teams qualify automatically for the tournament every season with five additional qualifying places up for grabs. 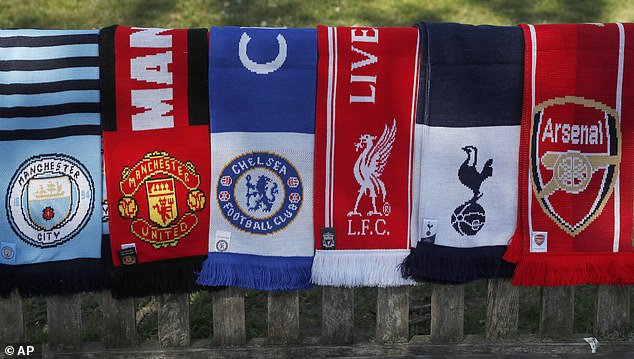 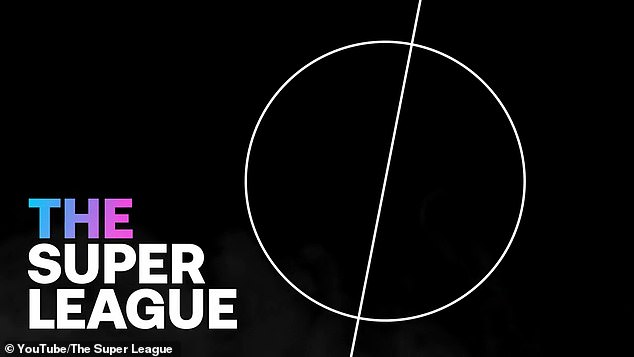 Teams will be split into two groups of ten, with the top three teams from each group qualifying for the quarter-finals – with play-offs to decide the other two teams reaching the knockout rounds.

Football supporters have complained about the creation of a Super League, with Liverpool fans also protesting against the move outside their Anfield Stadium.

Two large black banners were put up on the Anfield gates saying, ‘Shame on You. RIP LFC 1892-2021’ and ‘LFC Fans against European Super League.’ 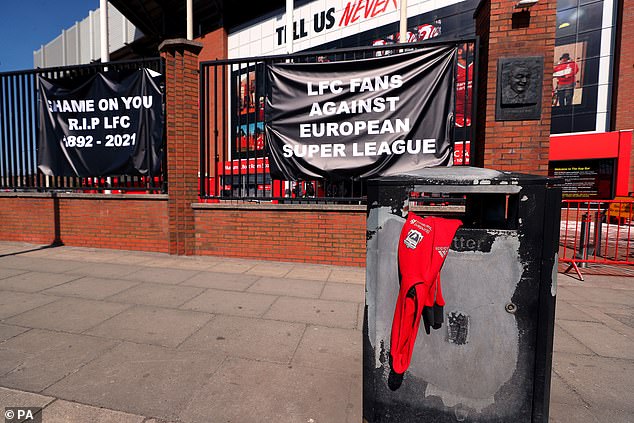 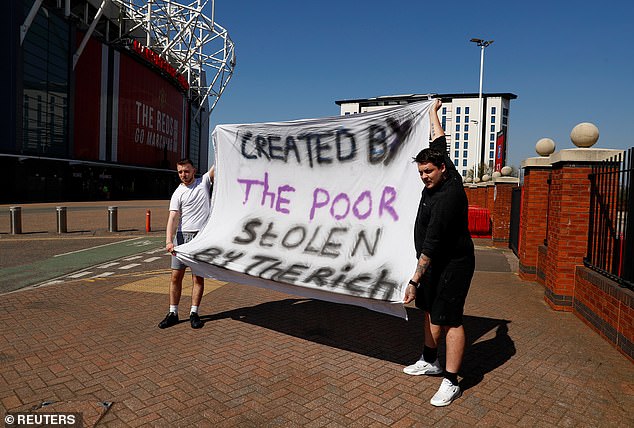 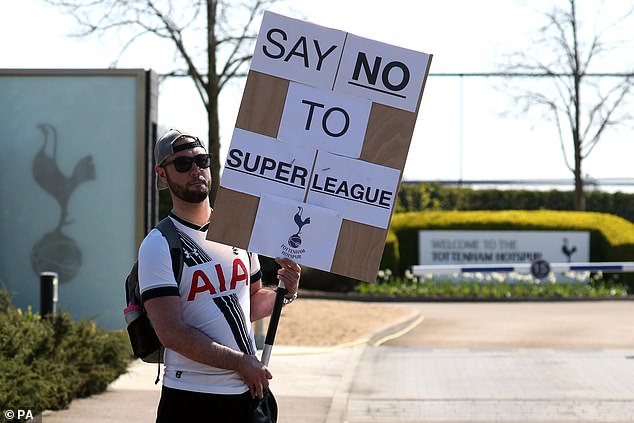 Football governing bodies UEFA, FIFA, the Premier League, the FA and European Club Association along with football associations in Italy and Spain have shown their disapproval about the ‘closed’ Super League that goes against ‘sporting competition and integrity’.

UEFA have already threatened to ban the sides involved in the Super League from European competitions this season and also prevent their players from taking part in international football.

The organisation’s president Alexander Ceferin said: ‘These are so-called big clubs, it is clear that the big clubs of today were not always big clubs. Juventus were in Serie B, Man United before Sir Alex Ferguson was I don’t know where.’

‘We will do the sanctions we can do within the law, of course.’