Fantasist called ‘Nick’, 51, described Lord Brittan as being ‘as close to evil as a human can get’

A man accused of lying to police about the existence of a VIP paedophile ring wrote a ‘tribute’ to Lord Brittan, in which he described the politician as being ‘as close to evil as a human being can get’, a court has heard.

Carl Beech, 51, sent the ‘personal tribute’ to his counsellor, Vicki Paterson, weeks after the former Conservative MP died, jurors were told on Friday.

In the piece, which was sent to the counsellor but directed towards the politician’s family, he said he did not see the ‘warm, witty and kind man’ described in the news, but instead saw a ‘brutal, sadistic and evil man’, responsible for raping him.

Prosecutors had previously told how Lord Brittan was one of many high-profile figures to be falsely accused by Beech, of Gloucester, of being a member of what he described as ‘The Group’ of high-profile men responsible for the murders of three boys.

Ms Paterson, who the court heard became the defendant’s counsellor in February 2012, explained how he sent her a ‘personal tribute’ to Lord Brittan on February 15 2015 as he was ‘had some very upset feelings’ around his death and how it was being covered in the news. 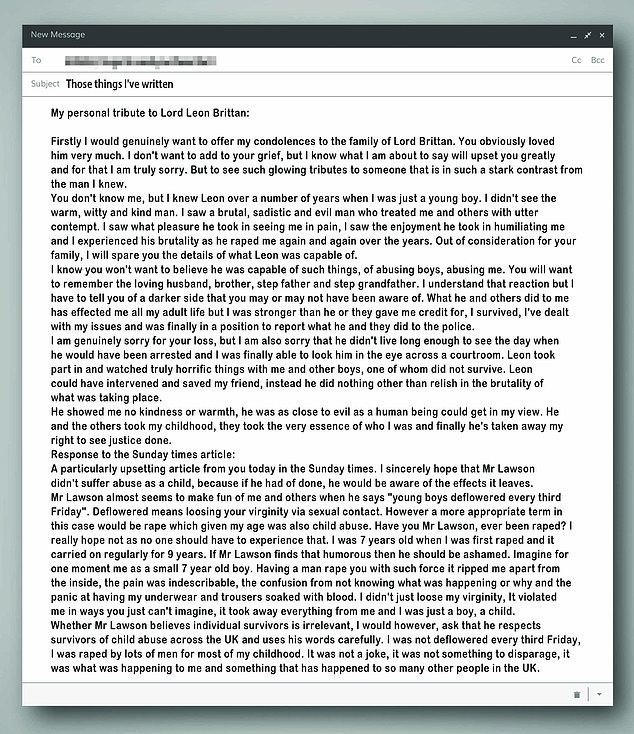 The ‘personal tribute’ Carl Beech sent to his counsellor, Vicki Paterson, weeks after the former Conservative MP died which was presented as evidence to the court during the trial on Friday 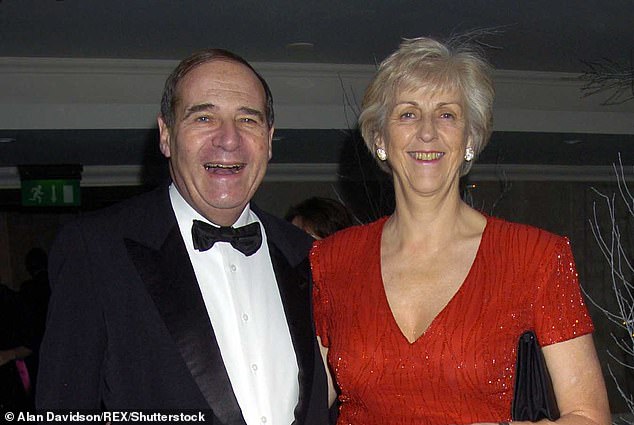 She said: ‘From my memory there was a session where he was very sad about Leon Brittan and what he was hearing on the news.

‘He had some very upset feelings around what was happening at this time so he said he wanted to write something about Lord Brittan to help with what he was feeling.’

Newcastle Crown Court heard how the tribute read: ‘I genuinely want to offer my condolences to the family of Leon Brittan. 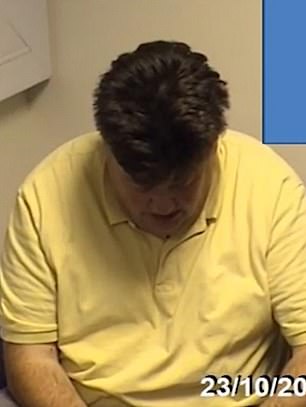 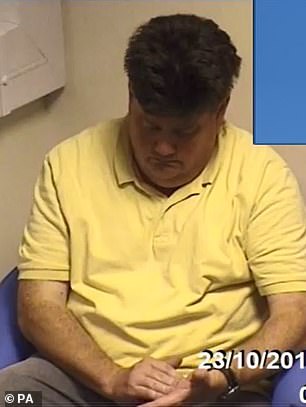 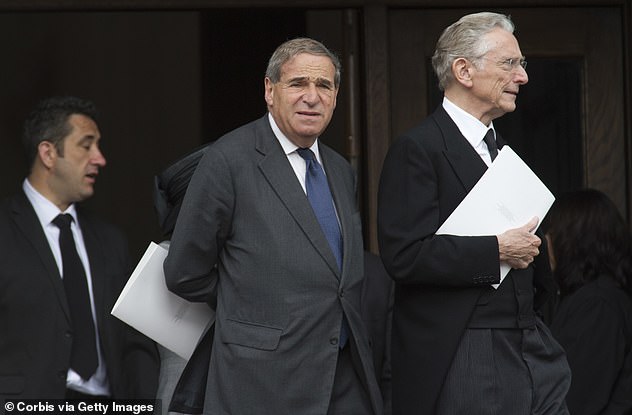 ‘You obviously loved him very much.

‘I do not want to add to your grief, but I know what I am about to say will upset you greatly.’

It added: ‘I did not see the warm, witty and kind man.

‘I saw a brutal, sadistic and evil man who treated myself and others with utter contempt.

‘I experienced his brutality as he raped me again and again over the years.

‘I am genuinely sorry for your loss, but I am sorry he did not live long enough to see the day when he would be arrested and I was finally able to look him in the eye across a court room.’ 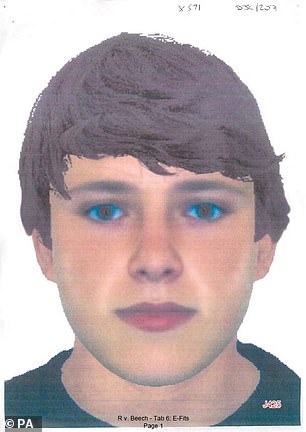 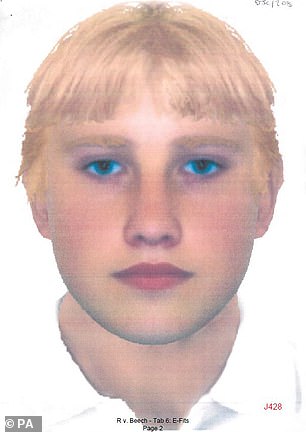 An e-fit image produced by Detective Constable Tony Barnes following a conversation with Carl Beech. The former nurse who is on trial at Newcastle Crown Court where he is accused of inventing claims about a VIP paedophile ring, says that the efit depicts a boy he claims was killed by former MP Harvey Proctor

He described how Lord Brittan did ‘truly horrific things to me and other boys, one of whom died.’

The tribute added: ‘He showed me no kindness or warmth.

‘He was as close to evil as a human being can get, in my view.

‘He has taken away my right to see justice done.’

Ms Paterson also described how Beech had talked to her about three separate murders he said had been conducted by ‘The Group’, which he also told the police about. 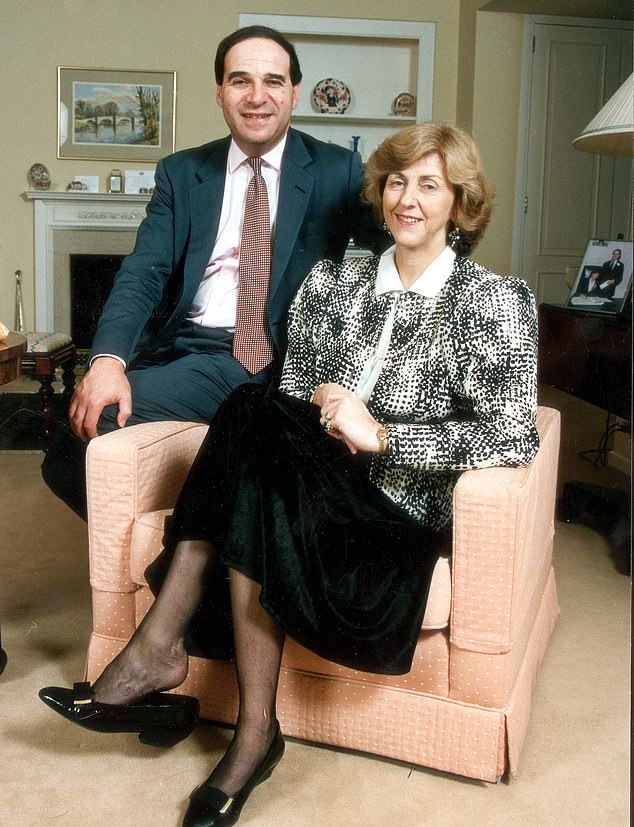 Lord Brittan pictured with Lady Brittan in 1992. Lady Brittan said she was ‘deeply distressed’ by the possibility of the government’s child sex abuse inquiry dragging up false allegations against her husband, in February

On October 9 2014, the councillor said she received an email from the defendant in which he said he had spoken to the Metropolitan Police about the allegations, telling her: ‘They seemed confident that they will be making arrests within a month or so.

‘Whether or not they do, we will see.’

The councillor said she had been told by her client that former MP Harvey Proctor, Lord Brittan and ex-prime minister Edward Heath had been part of what he called an ‘inner group’ within ‘The Group’.

Jimmy Savile was said to have been among the ‘gang’ and it was the police investigations into the ex-TV presenter that prompted Beech going to the police, the witness explained.

Ms Paterson also told how Beech’s struggles with coping with what the paedophile ring had supposedly done to him prompted him to get him involved with a ‘Wall of Silence’ exhibition put on to ‘raise awareness for victims and survivors of sexual abuse’.

Mr Beech denies 12 counts of perverting the course of justice and one of fraud. The trial continues at at Newcastle Crown Court. 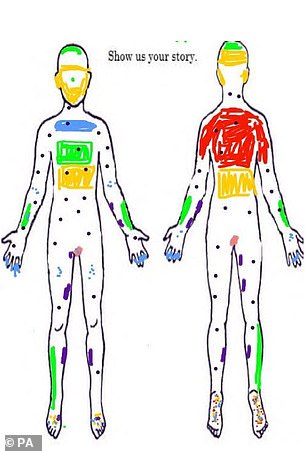 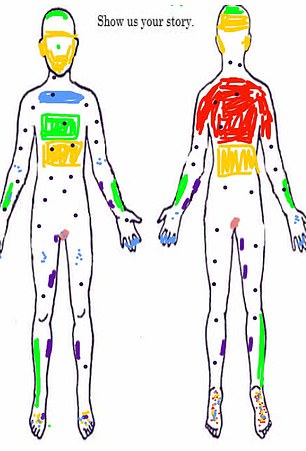 A ‘body map’ supposedly sent by Carl Beech to his counsellor, Vicki Paterson, explaining the injuries he said he had received at the hands of a ‘VIP paedophile ring’, as he is accused of lying to detectives over its existence