Thousands of demonstrators for and against the far-right faced off in mass rival rallies in Berlin on Sunday, where calls of ‘We are the people’ were countered with ‘Go away, Nazis’.

The march organised by the anti-immigrant, anti-Islam Alternative for Germany (AfD) drew over 5,000 supporters while the counter-demonstrators numbered more than 25,000, police said.

The rallies passed off largely peacefully, although Berlin police said on Twitter that they had to use pepper spray to stop ‘demonstrators from trying to break down barriers’ at one square.

AfD supporters kicked off their march ‘for the future of Germany’ shortly after midday at Berlin’s main train station, before walking to the Brandenburg Gate, with many waving Germany’s black, red and gold flag. 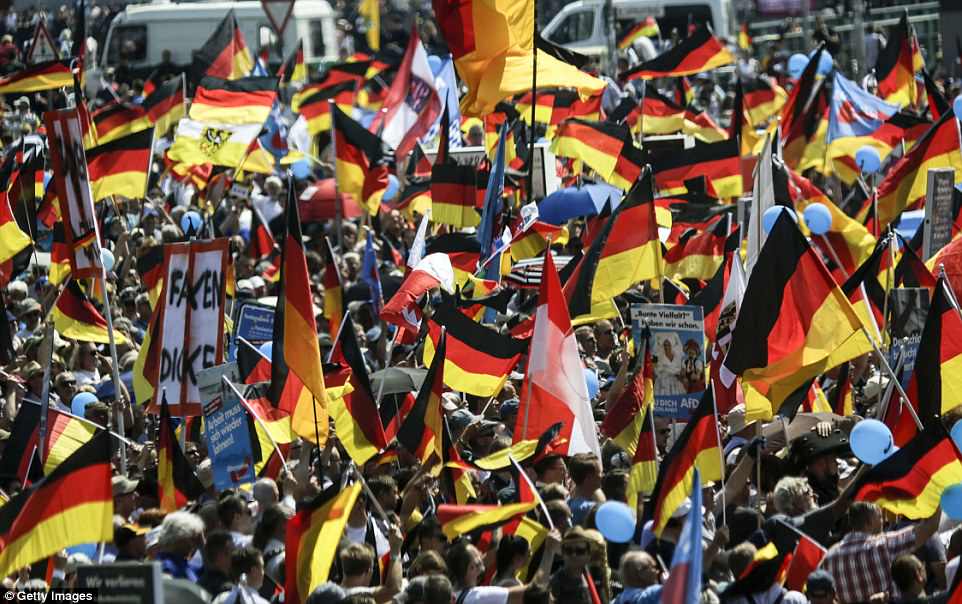 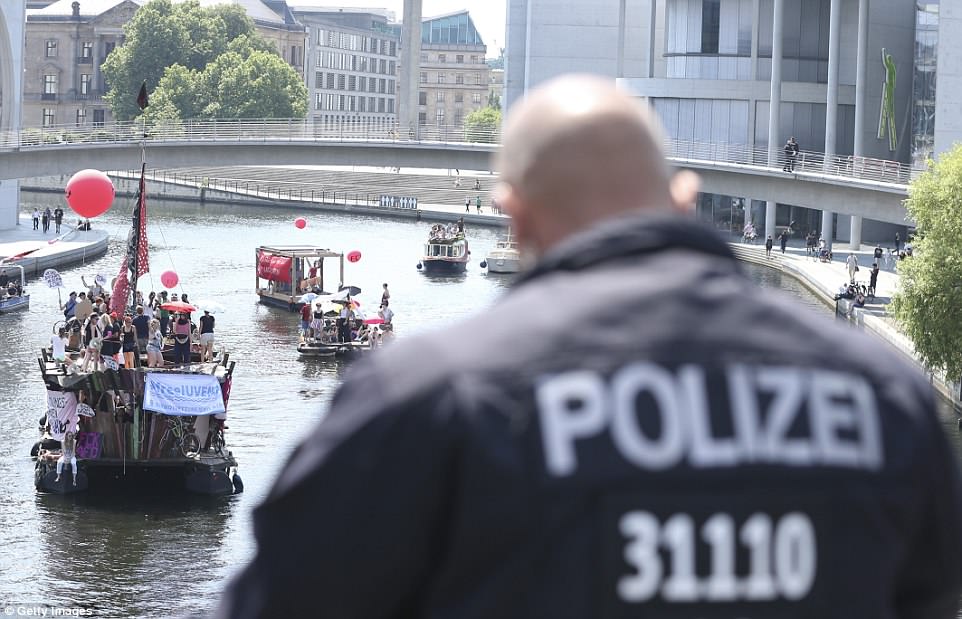 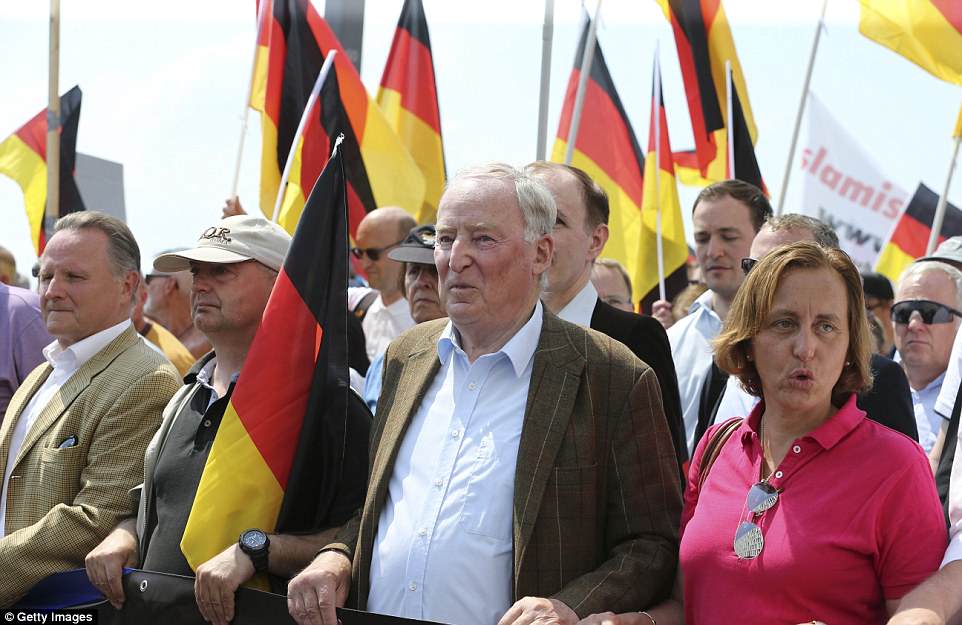 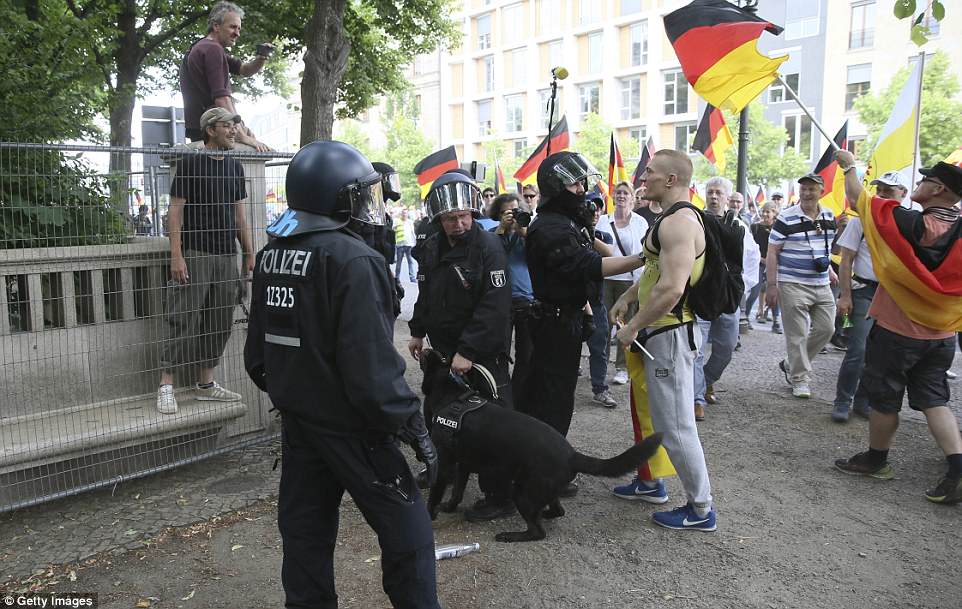 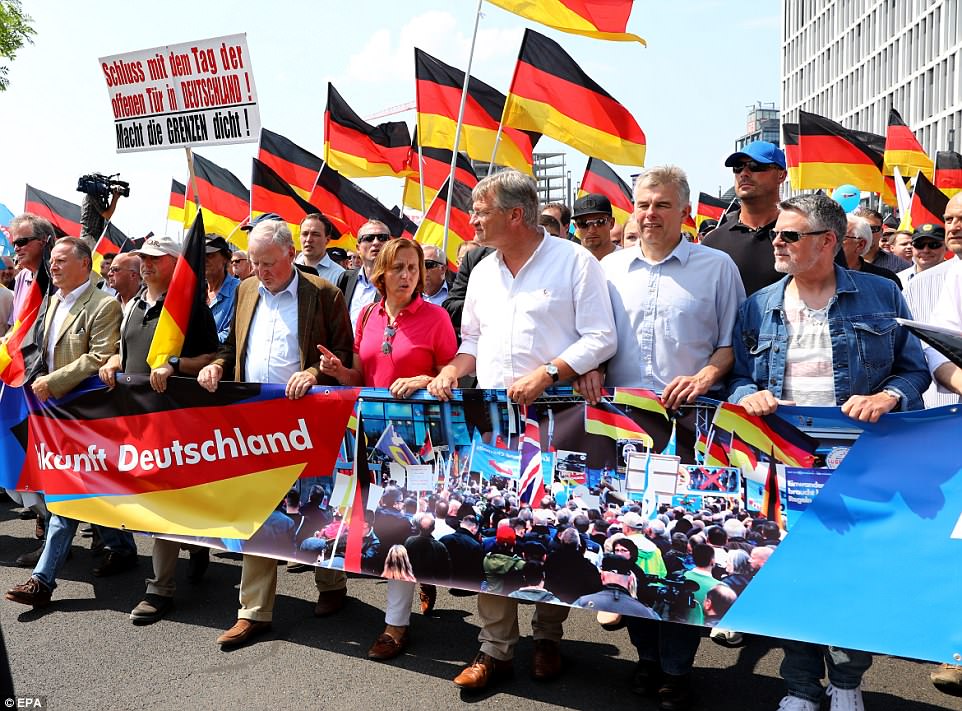 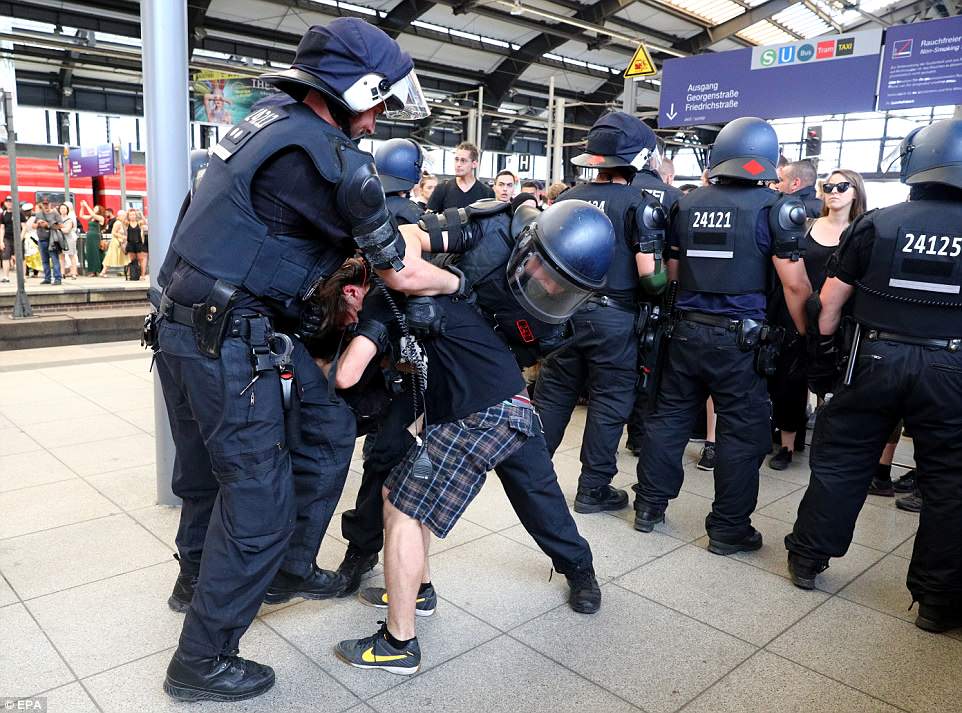 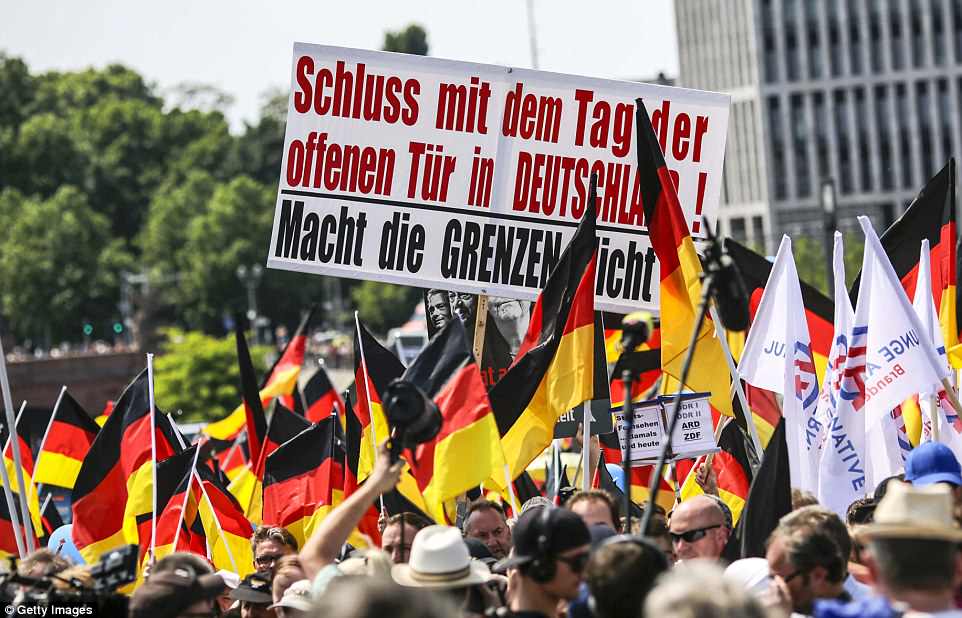 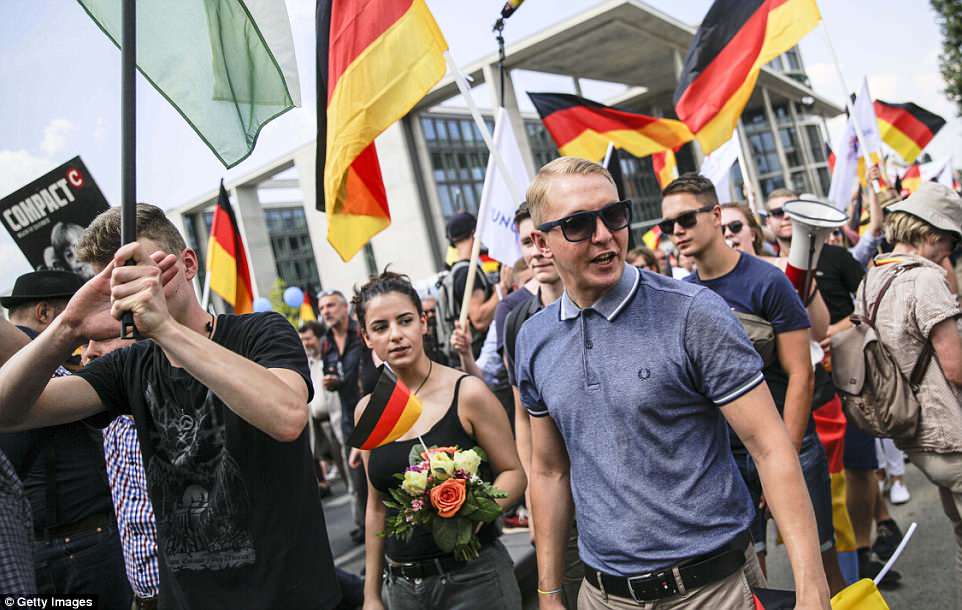 Along the route, their chants of ‘Merkel must go’ and ‘We are the people’ were occasionally drowned out by whistles, jeers and outstretched middle fingers from counter-demonstrators in side streets blocked off by police.

At last year’s elections the AfD became the third-largest party in the Bundestag, winning 92 seats. Because of the ‘grand coalition’ between the two major parties the AfD is currently the largest opposition party.

Founded as an anti-EU party during the euro crisis in 2013, it reinvented itself with an anti-immigration stance after Merkel’s decision to open Germany’s borders to more than a million refugees in 2015.

‘Now we know that many Islamists were among the refugees and they have no respect for women,’ 41-year-old AfD member and teacher Christine Moessl told AFP.

Addressing the crowd, AfD chairman Alexander Gauland said:  ‘Merkel is not Germany. We love our country. And we want to pass it on to our children the way our grandfathers did for us.’

Some of the counter-demonstrators were from the city’s club scene, with one group aiming to ‘Bass the AfD away’ with music blasting from speakers mounted on trucks.

‘We want to be loud enough to drown out the racist speeches,’ an activist named Rosa told RBB public television. The thudding techno beat echoed across the city centre on Sunday afternoon.

Another group of anti-AfD protesters were on a boat on the Spree river holding up placards saying ‘You stink!’ 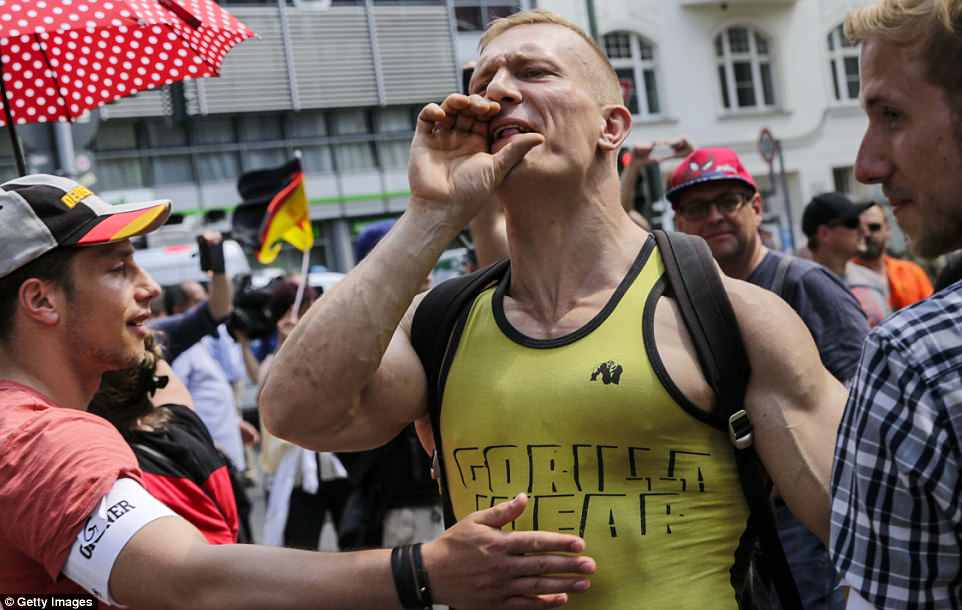 An anti-AfD marcher holds up a sign saying ‘Stop the AfD’ and reading: ‘Our alternative is called solidarity’ 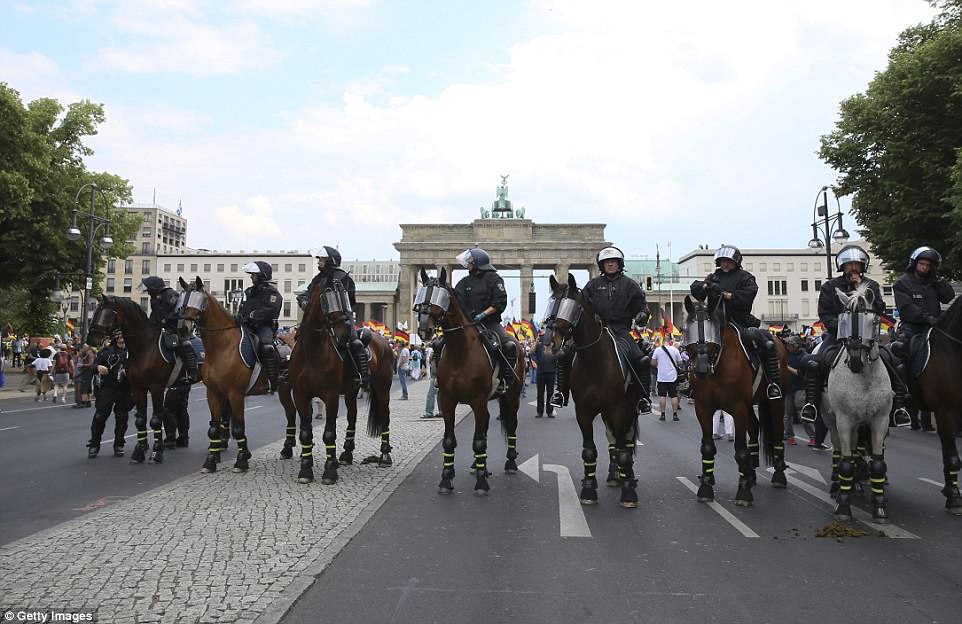 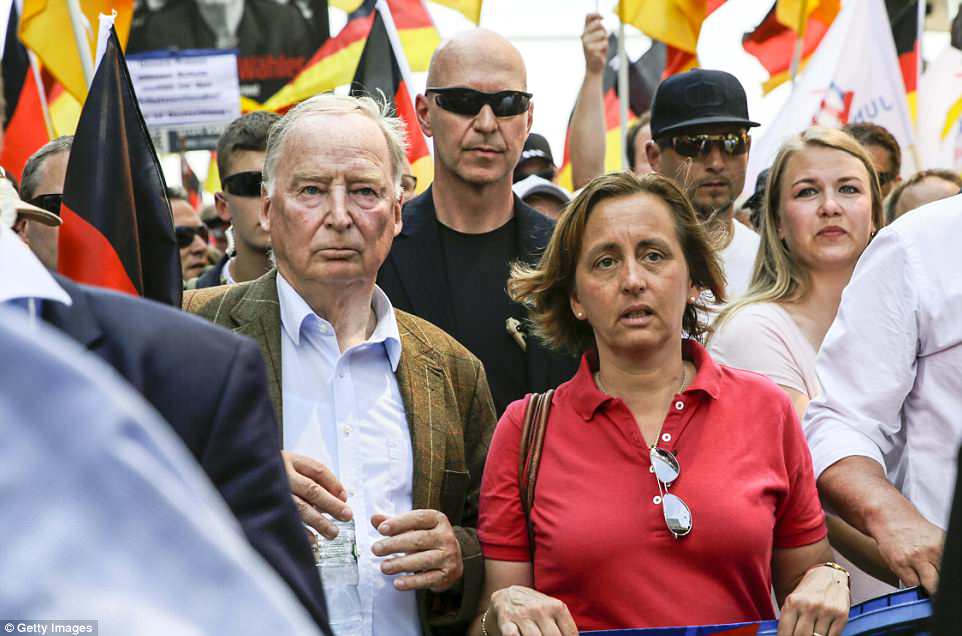 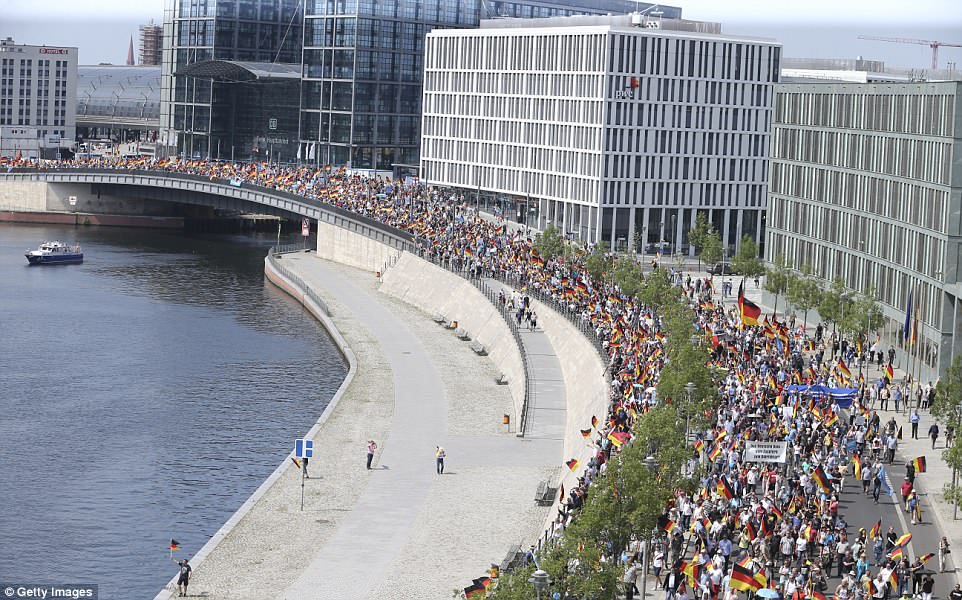 AfD supporters wave German flags as they walk alongside the river in Berlin. One placard calls for the ‘protection of borders’ 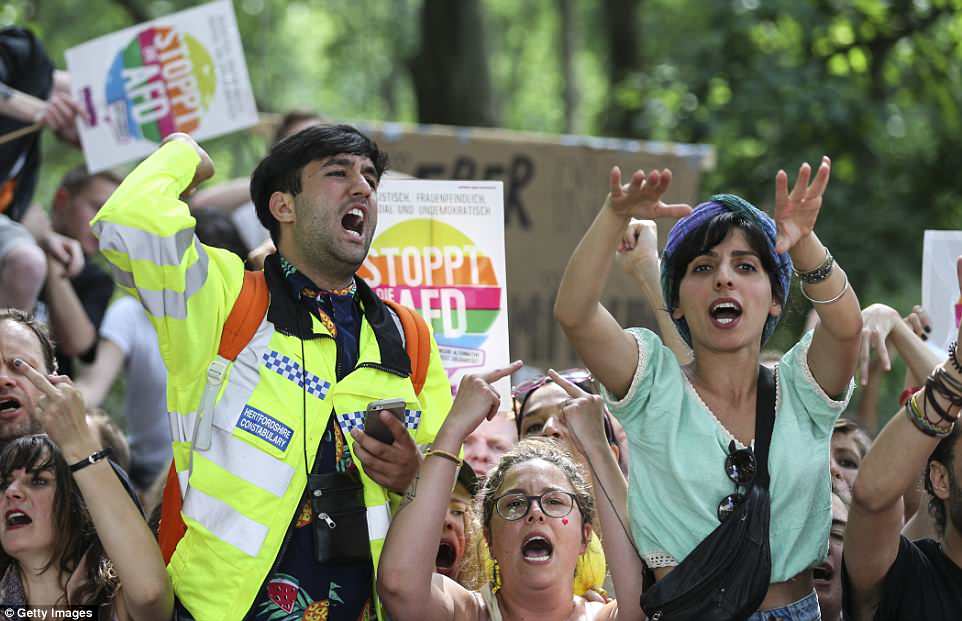 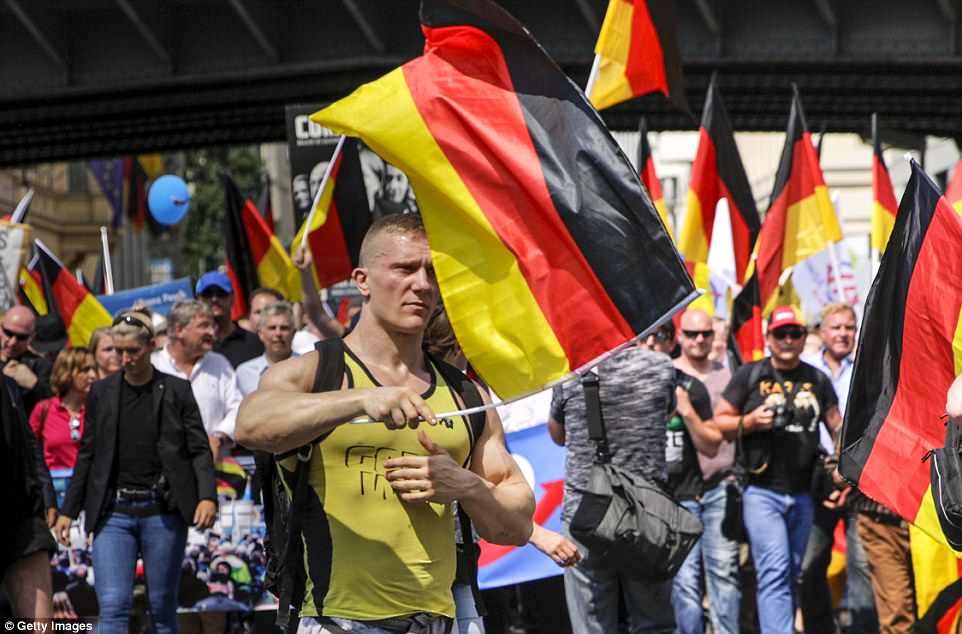 A couple embrace near the Brandenburg Gate in Berlin, with the woman holding a sign saying: ‘Stop hate’ 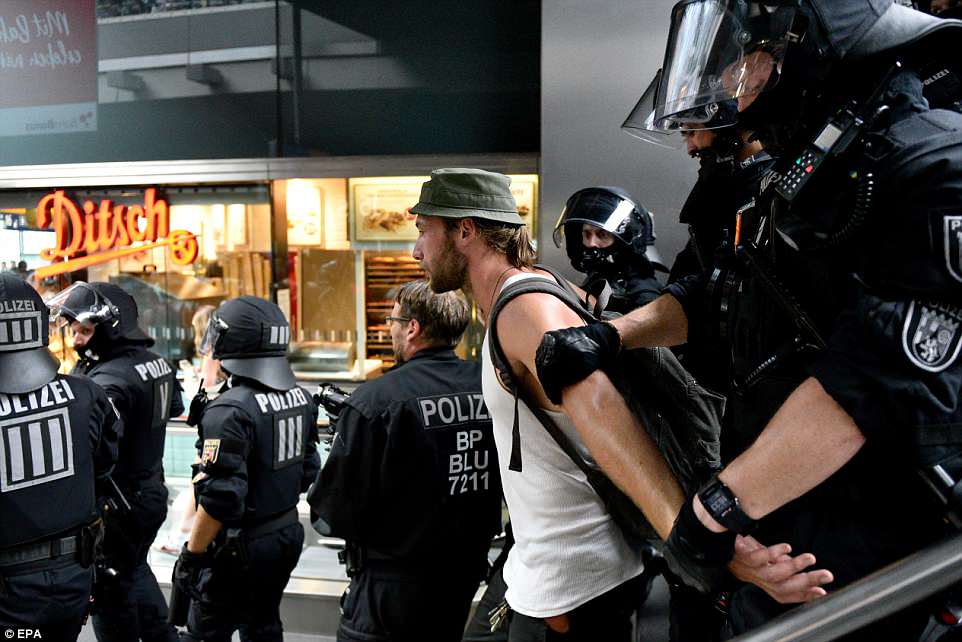