Nigel Farage has dismissed Jeremy Hunt’s claims that pursuing a No Deal Brexit would be ‘political suicide’ in a direct intervention in the Tory leadership race.

The triumphant Brexit Party leader said it was ‘absolute rubbish’ for Mr Hunt to suggest he could negotiate a better deal with Brussels than Theresa May.

‘Every single person here in the European Commission, and leading groups in the European Parliament, will not change by one dot or comma that withdrawal agreement,’ Mr Farage told listeners as he hosted his LBC show in Brussels today.

‘And it’s not an agreement, it’s a treaty, leather bound and Monsieur Barnier walks around with it under his arm.

‘The truth of it is, if a Parliament tried to stop a Prime Minister leaving on that date and he ran a general election campaign on a No Deal, he actually would win a massive majority in the House of Commons.’

Mr Farage also slammed Mr Hunt for proposing a new UK negotiating team which would not include members of the Brexit Party.

After declaring victory in the early hours of Monday Mr Farage had demanded that his victorious party be allowed to take part in talks with Brussels.

Speaking about Mr Hunt today he said: ‘He’s also pledging to create a new UK negotiating team – I wonder where he got that idea from?

‘That’s going to include some new members of the Conservative party and the DUP, but absolutely no mention of course of the offer I made on behalf of the Brexit Party.

‘I just don’t think that Jeremy Hunt and others in Westminster have listened and understood the implications for their party of what happened to them on Sunday night.’

Speaking to one listener who called to blast the Tories, Mr Farage said: ‘I’m going to invite Jeremy Hunt to come into the studio one Sunday morning. We’ll get him to take some calls and get him to understand what the mood of people like you is.’

Mr Hunt had warned that a PM intent on No Deal Brexit would be brought down in the House of Commons. 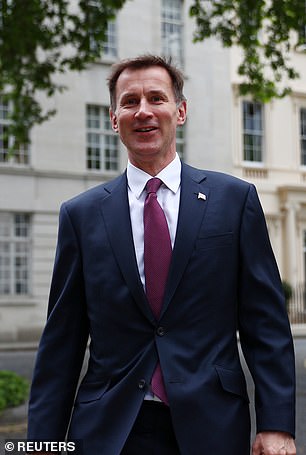 That could force a general election which Mr Hunt said could put Jeremy Corbyn in Downing Street.

Mr Farage has also threatened to unleash the fury of Brexit Party voters at a Westminster election.

Foreign Secretary Mr Hunt said it was important to ‘find a different way to get a deal’, adding ‘we have to have a go at this’.

He added: ‘The only solution to the extremely difficult situation we’re in – and I don’t want to pretend that there’s an easy way through this – is to change the Withdrawal Agreement.’

Defending the Brexit Party’s absence from a possible negotiating team, he said Mr Farage was not in Parliament and did not want a deal.

Mr Hunt previously touted his credentials as a businessman as he entered the crowded Tory leadership race.

On his show today Mr Farage also renewed his fury at Remainer claims that pro-EU parties had collectively done better than Brexiteers at the European elections. 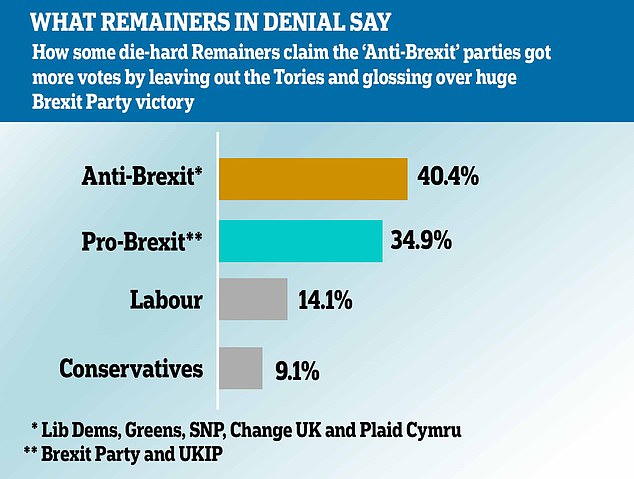 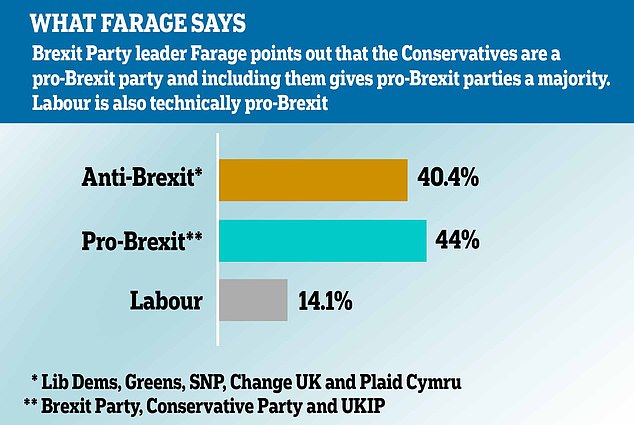 The Lib Dems, Greens, Change UK and Scottish and Welsh nationalists won more votes between them than the combined efforts of the Brexit Party and Ukip.

But that sum fails to take account of the pro-Brexit Tories. If they are included in the Brexit column, pro-Leave parties were stronger overall.

On his show Mr Farage held up a Lib Dem leaflet from before polling day in which Labour and the Tories were named as pro-Brexit parties.

‘In their leaflets they tell you – the Conservative and Labour parties were choices for a form of Brexit,’ he said. 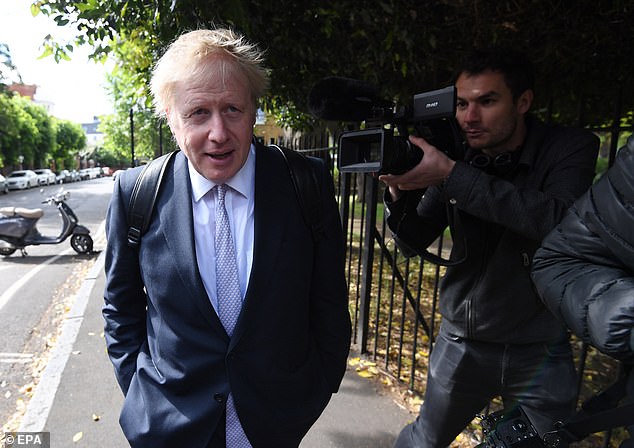 ‘That shows you some of the trickery that was going on.’

Some Tory leadership candidates have reacted to the party’s mauling at the European elections by vowing to leave the EU without a deal if necessary.

Boris Johnson vowed to take Britain out of the EU on October 31, ‘deal or no deal’, if he is elected Tory leader.

Rival candidate Esther McVey said that ‘we must now leave the EU on October 31 with a clean break’ and said it would be ‘political suicide’ to have another delay.

But other candidates including Jeremy Hunt and Rory Stewart have voiced concerns about No Deal.

The Conservatives fell to a humiliating fifth place in the European elections, falling behind the Brexit Party, the Lib Dems, Labour and the Greens.