Fare evasion with a difference: Man jumps from a bridge onto the roof of a moving ferry in Perth

That’s one way to get a free trip! Daredevil jumps from a bridge onto the roof of a moving ferry in Perth

A young man has left onlookers stunned after jumping from a bridge onto the roof of a moving ferry.

The shocking footage taken in Guildford in Perth’s north-east showed the risk-taker go through the bridge and drop down onto the Captain Cook Cruises boat.

He then started running to the back of the vessel before jumping into the city’s Swan River as a group on the shore filmed the hair-raising stunt. 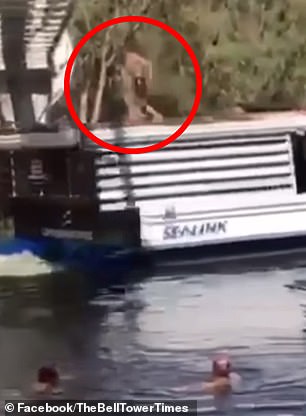 One of the onlookers behind the camera said ‘oh s**t’ as the man landed on the boat while another called him a ‘f***ing idiot’.

The bridge carries a water pipeline supplying nearby suburbs and is illegal to climb, PerthNow reported.

Police are investigating the incident, which was shared to social media.

Captain Cook Cruises said they would work with authorities to prevent a repeat of the man’s actions.

It comes after a video emerged in 2018 of a young man in the Perth suburb of Fremantle leaping off a train and into the water below.