Farewell to Sir Terence Conran, who has died at the age of 88

If Sir Terence Conran’s sole legacy was to have brought affordable style to the High Street, his place in Britain’s history would be assured. But he achieved so much more than that.

Yet this indefatigable man, who hated holidays because they interfered with work, was never going to rest there.

If Sir Terence Conran’s sole legacy was to have brought affordable style to the High Street, his place in Britain’s history would be assured. But he achieved so much more than that

After Habitat came the Conran Shop. Soon afterwards, he was opening the first of more than 50 restaurants, including Mezzo, the first in London to seat 700 diners.

Somehow he also found time to write or co-author more than 40 books, and launch the Design Museum. Then there was his architectural practice, where projects ranged from hotels to urban regeneration projects in London and Tokyo, and his role as an adviser to Margaret Thatcher when she was prime minister.

Above all else, however, it was as a ‘visionary’ and a ‘proud patriot’ that Sir Terence was yesterday described following his death at the age of 88.

His family said he died peacefully and had enjoyed an ‘extraordinary life and career’, adding: ‘It gives us great comfort to know that many of you will mourn with us but we ask that you celebrate Terence’s extraordinary legacy and contribution to the country he loved so dearly.’

They added that he had ‘promoted the best of British design, culture and the arts around the world’ with ‘a very simple belief that good design improves the quality of people’s lives’. 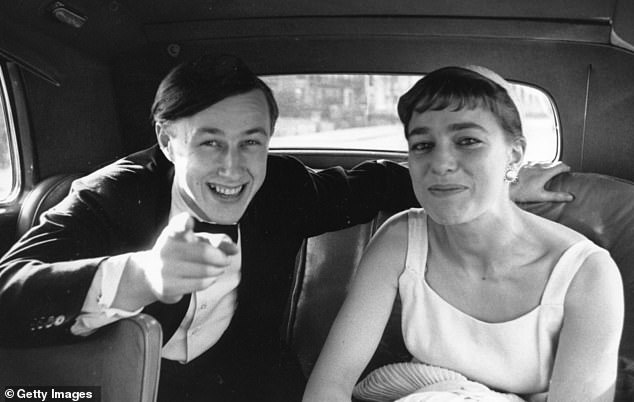 Wife No. 2: Terence and Shirley Conran in 1955 – they had two sons, Sebastian and Jasper

Born in Kingston-upon-Thames, Sir Terence’s first foray into furniture design came at the age of 12 as he lay in hospital recovering from a burst appendix. To pass the time he built furniture for dolls’ houses – and never looked back.

Educated at Bryanston School in Dorset, he later studied at the Central School of Art and Design [now Central St Martins], where he recalled wearing ‘rather outlandish clothes. ‘I remember going to Cecil Gee and buying inappropriate things and my father being rather embarrassed when he had to stand on the train platform with me,’ he once recalled.

‘London was a depressed place at that time, with all its bomb sites. It was difficult to find anything decent to eat.

‘My tutor at college was the artist Eduardo Paolozzi. He was very keen on his Italian food and used to get food parcels from his parents.

‘I remember sitting with him to eat a black ink octopus risotto. He taught me how to chop up an onion and the importance of garlic. He, more than anyone else, was my food influence.’

After studying textile design and setting up his own furniture studio, he joined an architectural firm in 1950 and worked on the subsequent year’s Festival of Britain.

He pioneered open-plan living and in 1958 invited a journalist to his London home to see for herself this ‘new kind of house planning where you cook, eat, work and play in one enormous room’. 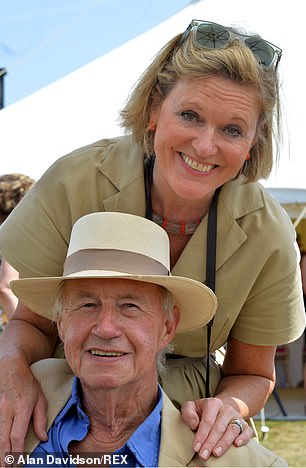 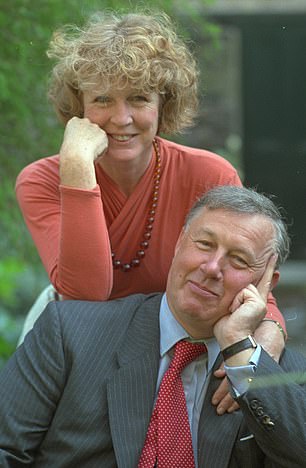 With third wife Caroline, above, with whom he had three children. Right: the designer met fourth wife Vicki in the south of France

The journalist was unconvinced and later pondered how a woman could listen to Perry Como when her husband ‘wants quiet for his office papers’.

While the Conran empire included many retail brands, including Mothercare, it was for his fashionable furniture, interiors and homeware that he remains best known.

Products had to be simple and well-designed before they made it on to the shelves – and even the shelves themselves were like nothing any shopper had seen before.

Alongside beds and wardrobes were sold a number of smaller items, seductively displayed in overfilled bowls, or stacked casually on the black slate floor and against whitewashed walls. Such touches are ubiquitous these days, but 50 years ago it seemed like a concept from another galaxy.

After sleeping under a duvet in a hotel in Sweden, Sir Terence thought, ‘Gosh, how comfortable, how easy and how sexy’, and later became the first person to sell them in Britain.

Early Habitat targeted its goods at Britons on a teacher’s salary. ‘I suppose setting up Habitat is the thing that most stands out in my accomplishments – that and the Conran Shops, which really are a more sophisticated version of what Habitat was,’ he once said. ‘But I view opening the new Design Museum as the greatest achievement of my life.’ The museum, in Kensington, West London, covers product, industrial, graphic, fashion and architectural design.

Leading the tributes to Sir Terence yesterday, the museum’s director Tim Marlow said it was a ‘privilege and an inspiration to know him’, adding: ‘Terence Conran was instrumental in the re-designing of post-war Britain and his legacy is huge. He is revered by generations of designers, from Mary Quant and David Mellor to Thomas Heatherwick and Jony Ive. ‘He changed the way we lived and shopped and ate.

‘He also created a great institution – the Design Museum – of which he was justifiably proud and with which he remained fully engaged right to the end of his extraordinary life.’

Sir Terence married his first wife, an architect called Brenda Davison, when he was 19. The marriage lasted barely six months. Then came Shirley Conran, novelist and author of the Superwoman books. They had two sons, Sebastian and Jasper, but the couple divorced in 1962.

‘It wasn’t acrimonious. It could have been,’ Sir Terence once said. Then followed Caroline Herbert, with whom he had another three children – Tom, Sophie, and Edmund – but she left him for another man on their 30th wedding anniversary. He then met Vicki, his current wife, in the south of France. I had to make more of an effort to be a good husband,’ he once said.

‘Although my children will say, ‘You are a good father’, I don’t think I was and I certainly don’t think I was a good husband … Too much time put into the business, quite honestly, and not enough time given to looking after them, although I always went on holiday with them.’

He once admitted to having made his staff take the stairs rather than the lift (he once shouted at an art director who took the lift, ‘Do you know how much money you’ve just cost me?’) and picking up pieces of crumpled paper in the bin, flattening them out and putting them back on his employees’ desks to re-use.

‘I’m a war child and if you are a war child you remember all those things that were drummed into you,’ he explained.

Despite Sir Terence’s frugality he always cut a glamorous figure, part of the set who would launch Swinging London in the Sixties.

Oozing self-confidence, he was perfectly placed to profit from the rise of the Sunday newspaper colour supplements educating the new breed of consumers in what constituted good taste. This meant bringing good design and good quality to a broader market – ‘a quality of life that is easy, not pretentious and not snobbish’.

It was once said that ‘what Terence did was to create this idea of a life that appeared to be his, and that we would all like to live’.

Lord Mandelson, chairman of the board of trustees at the Design Museum, said: ‘Terence Conran has filled our lives for generations with ideas, innovation and brilliant design. He is one of the most iconic figures of post-war Britain, starting to recast the world of design when as a young man he joined the team working on the 1951 Festival of Britain and never stopping from that moment on.

‘He leaves a treasure trove of household and industrial design that will stay with us for ever.’

A Habitat spokesman said: ‘Sir Terence Conran leaves a legacy of well-loved designs and our thoughts are with his family and friends at this difficult time.’

In an interview a few years ago, the designer talked about his work ethic. ‘I’ve never looked forward to retiring; I’m desperately busy even now,’ he said. ‘But the only time I’ve ever felt bad about getting older was when I got to about 35 and realised it was time to give up playing rugby.

‘I try to avoid looking in the mirror. I’ve got a terribly bad back and the only way I feel relaxed is in my comfy old chair with a wood fire three feet away. I still enjoy smoking cigars and drinking whisky and wine. My doctor’s a sensible man and he says enjoying life is more important than the pills he gives me. The young me would be amazed to see what I’ve done.

‘What I’ve managed to achieve, in a small way, is to get the country to appreciate design. That’s what I hope to leave behind.’