A farming boss says his company had spent £40,000 to fly 150 experienced Romanian farm workers to the UK to teach unskilled British fruit and vegetable pickers how to harvest.

Anthony Gardiner, boss at G’s Growers, says the situation was getting desperate because their regular land army of foreign workers are locked down in their own countries.

His firm chartered a Titan Airways AirBus 320 flight to get the team of ‘critically important’ pickers to the UK, which landed at Stansted Airport yesterday.

The Country Land and Business Association (CLA), which represents more than 30,000 landowners and rural firms, issued a nationwide appeal for Brits join a new ‘Land Army’ of farm workers to pick fruit and vegetables amid the coronavirus lockdown.

The Alliance of Ethical Labour Providers said it had received 36,000 applications of interest following a nationwide appeal for recruits, but only 6,000 had come forward to be interviewed for a role when selected.

Some of the reasons for turning down the job included the length of the contract, location of the farm, and inability to work full time because of care responsibilities.

A farming boss has told how his company spent £40,000 on a charter flight to fly Romanian workers to the UK to teach British fruit pickers how to harvest 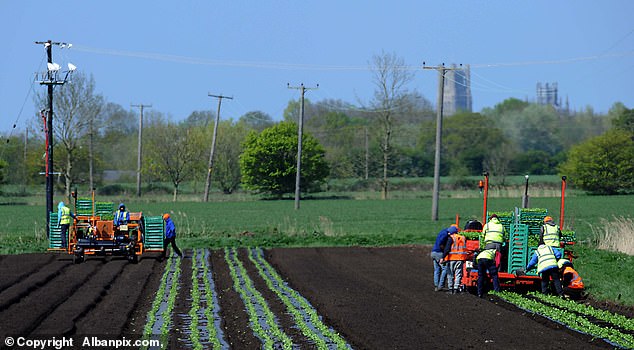 The young Romanians, a mix of men and women, were then transported by buses to the firm’s 7,000 hectare super farm in East Anglia ahead of the start of the picking season on Monday. Pictured: Workers at the site on Friday 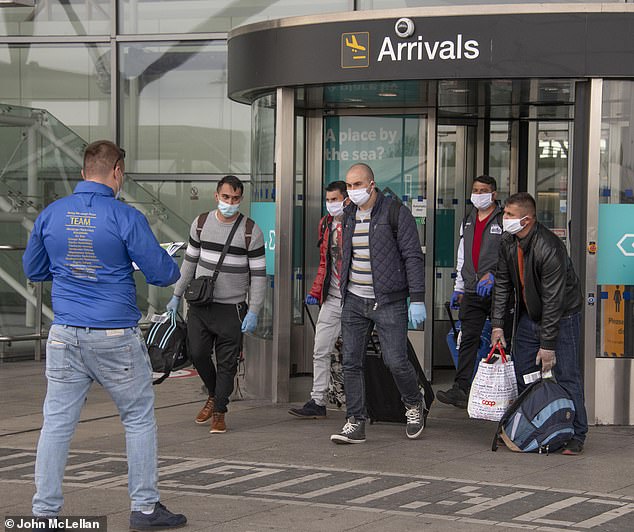 The 150 Romanians, described as ‘critically important’ workers, were flown into Stansted airport yesterday on a chartered flight arranged by the farming company G’s Growers

Mr Gardener said they were desperately needed to help the firm’s 500 recently recruited UK workers ‘up to speed’ and ‘comply with food and hygiene standards.’

And he admitted was the first time since the days of Margaret Thatcher in the eighties that British workers would outnumber foreigners on his farms.

Speaking to MailOnline, the farming boss said: ‘That is the reason we decided to organise our own flight to bring in people from Romania. In the past three weeks, we have offered 500 jobs to UK residents.

‘It is going really well. Our season will be ramping up in the next few weeks and we are continuing our campaign to recruit more. 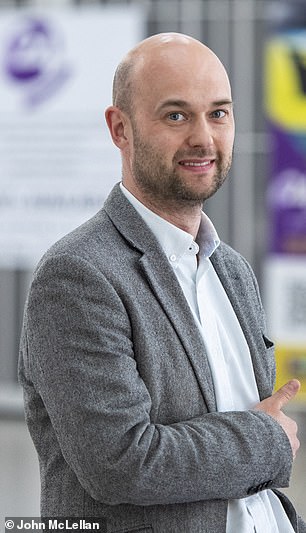 Anthony Gardiner is a boss at G’s Growers

‘We anticipate that 60 per cent of people we are bringing in are going to be UK-based residents – but you can’t run a business on completely brand new people.

‘You have got to have some people who are experienced and know what they are doing.

‘They will help bring the newcomers up to pace and to comply with food hygiene and safety standards.’

He added: ‘The last time we had a majority of British people picking in the fields was at the very end of the 1980s.

‘Our hope is that this year we will have two-thirds of our workforce from Britain but you need an experienced core for the newcomers to learn from. It is not just picking.

‘You need knowledge of food safety to do it properly.’

Meanwhile Beverly Dixon, HR director for the company, said: ‘By putting on this flight we are honouring our commitment to those who have worked with us over a number of years.

‘These workers from Romania know about the food safety. They will provide the platform while we train up the Brits.’

‘They are critically important to collecting the crops, in this case gem lettuces. They will underpin our efficiency as we train up the new British staff. Without them we would have crops rotting in the field.’

It comes as farming bosses have warned that British crops may ‘rot in the fields’ unless 80,000 farm workers are found. 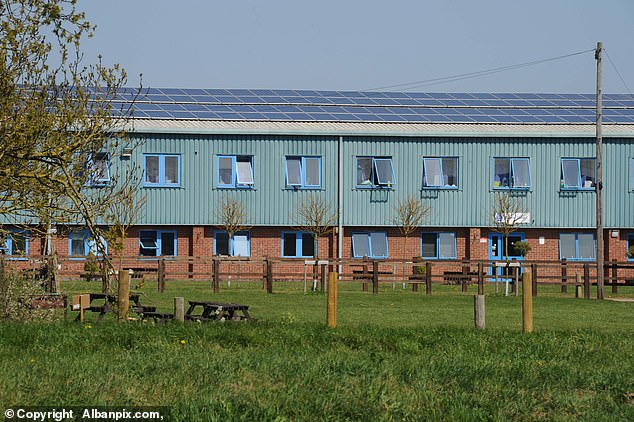 Mr Gardiner said the migrant workers were needed to help the British recruits come ‘up to pace’ and ‘comply with food and hygiene standards.’ Pictured: The migrant workers will live in the Barway Hostel on the site of G’s Growers’ farm

Workers at the Barway hostel pay £57.40 a week for their own room, equipped with a kettle and fridge-freezer with self catering facilities including microwaves and cooking rings

Around 80,000 workers are required every summer to work the fields, with British farmers usually being able to call on seasonal workers from Europe.

The new arrivals from Romania were today settling into their hostel accommodation on the site of the G’s Growers vegetable packing plant and head office at Barway near Ely, Cambridgeshire.

One worker who asked not to be named told MailOnline: ‘We are treated well and paid good money. The unemployed British people should come and join us.

‘Working in the fields can be hard and tiring, but you have the sun on your back and it makes you fit.

‘It might seem a bit crazy that we are going to be showing the British how to work in their own country – but we are looking forward to it.

It will be good for them to be in the fields instead of watching TV.’

G’s Growers has relied in recent years on an almost exclusively Eastern European seasonal workforce to harvest and pack its produce with most driving to the UK in their own cars to work every summer. 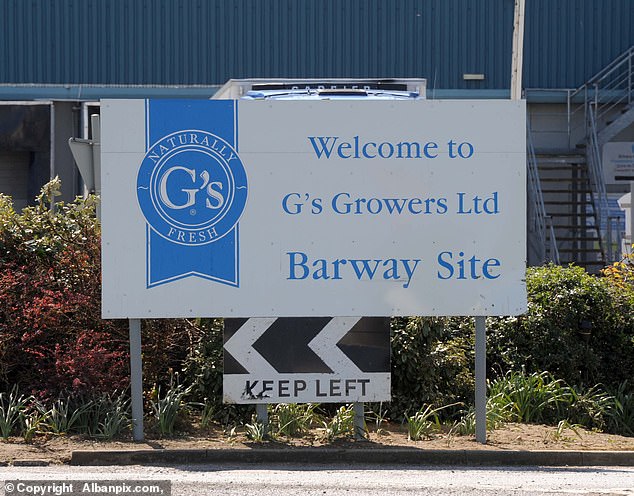 G’s Growers workers are paid at least the living wage – £8.72 per hour for those aged over 25, and the most efficient pickers can expect to earn up to £15-an-hour

But the coronavirus pandemic has led to airlines cancelling flights and land borders being closed, making it impossible for their normal workforce to make the journey.

The company instead launched a desperate campaign to attract British workers, and has so far offered 500 jobs to UK residents.

The campaign is targeting students who are not able to go back to university until September.

But it still wanted a proportion of experienced workers from Eastern Europe to help teach and encourage the inexperienced British in their new role as agricultural workers.

More flights are expected to follow in the next few weeks.

G’s Growers has the majority of its sites in the flat fenlands of Cambridgeshire, but also operates in Norfolk, Suffolk, Kent, West Sussex and the West Midlands 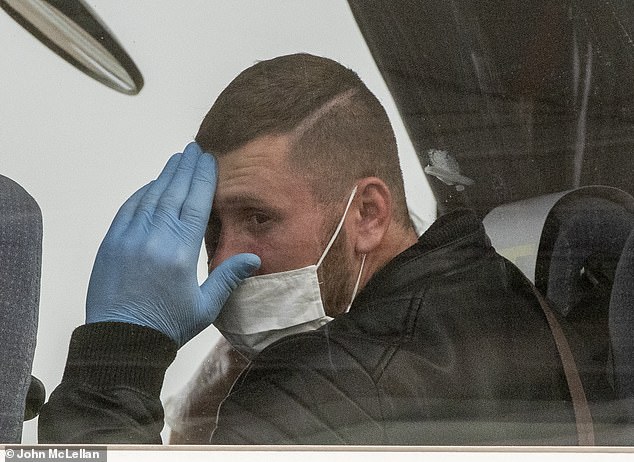 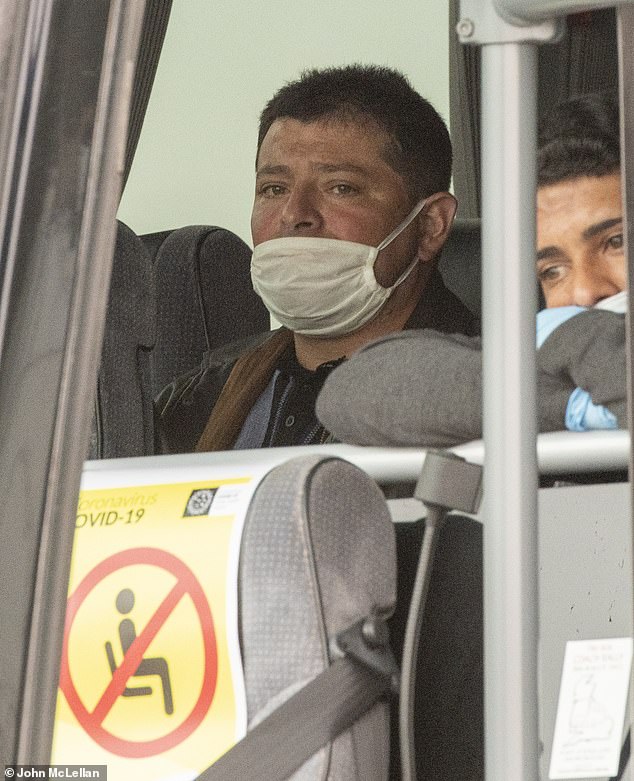 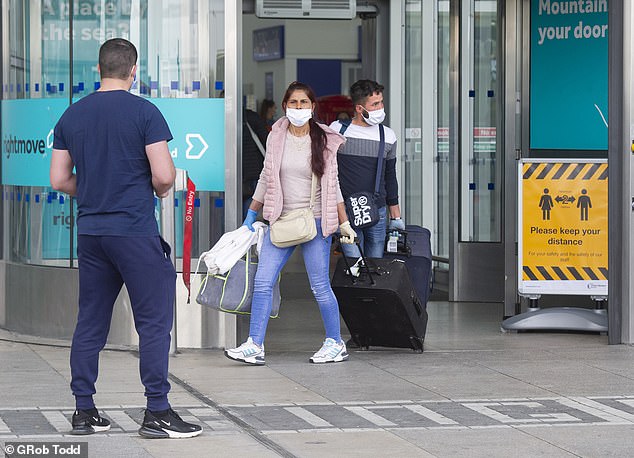 G’s Growers workers are paid at least the living wage – £8.72 per hour for those aged over 25, and the most efficient pickers can expect to earn up to £15-an-hour with performance bonuses.

Workers at the Barway hostel pay £57.40 a week for their own room, equipped with a kettle and fridge-freezer with self catering facilities including microwaves and cooking rings. 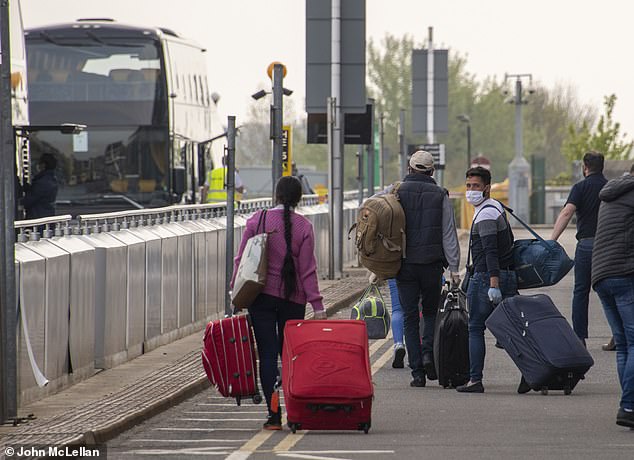 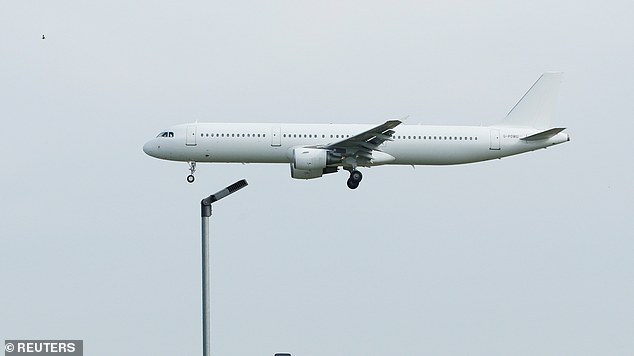 The workers arrived on a chartered plane yesterday, which was pictured as it flew into land at Stanstead Airport

Workers are being split into different colour-coded ‘household groups’ and only allowed to use communal areas at the same time as people in their group to minimise the risk of coronavirus spreading.

National Farmers Union vice president Tom Bradshaw told the BBC: ‘Growers that rely on seasonal workers to grow, pick and pack our fresh fruit, veg and flowers are extremely concerned about the impact coronavirus restrictions may have on their ability to recruit this critical workforce this season.

‘In the meantime, I would encourage anyone who is interested in helping pick for Britain this summer to contact one of the approved agricultural recruiters.’

There are signs that an increasing number of British workers are at least thinking about turning to agricultural work.

The recruitment website Totaljobs said it had seen 50,000 searches for farming jobs in one week alone.

It added that searches for terms such as ‘fruit picker’ or ‘farm worker’ had surged by 338% and 107% respectively.