A jury has been unable to reach a verdict in the case of a West Australian farmer accused of murdering his wife by crashing her car into a tree then burning her alive in a staged accident.

The jury began deliberating on Tuesday but by Friday afternoon said they could not reach a unanimous verdict, so they were discharged.

Gregory Paul Johnston was on trial for the murder of his wife, Susi Elizabeth Johnston (pictured) at their Boden, WA farm in 2008

He said it would be up to the director of public prosecutions to determine whether a retrial would be pursued.

Mr Johnston was granted bail ahead of a status conference on April 18.

The court heard during the trial that Mr Johnston repeatedly lied to police before he was finally charged a decade later.

Prosecutor Justin Whalley said Mr Johnston was the victim’s sole financial beneficiary and also mistakenly believed she had taken out a life insurance policy days before her death.

Mr Johnston escaped the blaze that killed his wife, unscathed, without even soot or smoke straining his clothes. 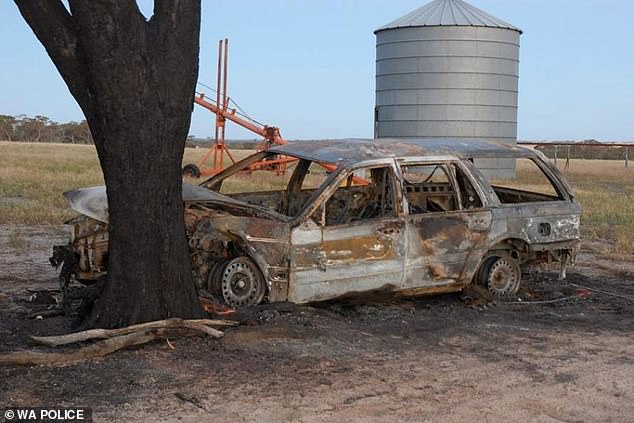 Johnston was accused of murdering his wife by crashing her car (pictured) into a tree, then burning her alive in a staged accident

In explaining how the accident happened, he first told police he had blacked out while driving, then that he was distracted, before finally stating that his wife had steered herself into the tree.

Mr Johnston had been unfaithful and days after his wife’s death transferred $15,000 into the bank account of a woman he had met online, then married her nine months later, the court heard.

But defence counsel Linda Black noted the lack of direct evidence in the circumstantial case, including any proof the fire was deliberately lit.

She admitted Mr Johnston cheated on his wife and lied to police, but insisted he was not a killer. 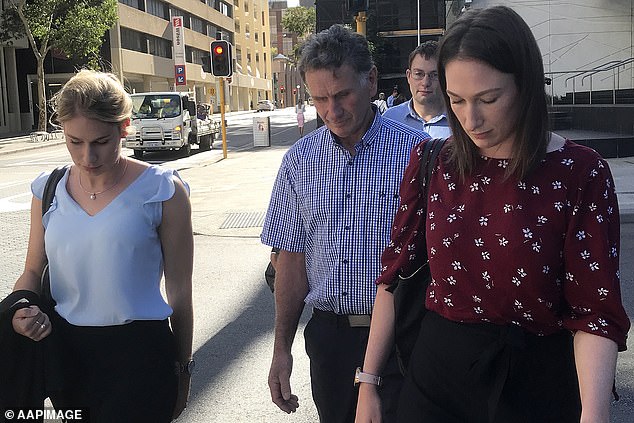 Gregory Paul Johnston (pictured leaving court in Perth with family members on Friday) may face a re-trial.  The decision is up to the WA director of public prosecutions

During the trial Johnston’s daughters both took the stand to defend their father, saying he had never been angry of violent, and had been left ‘broken’ by Susi Johnston’s death.

Both admitted their father’s story had changed over the years, but they still considered him gentle, generous and genial, PerthNow reported.

Defence council, Ms Black, also presented a theory that Ms Johnston wanted to kill herself, which was backed up by Mr Johnston’s daughter, Felicity.