While a heatwave has gripped the Northeast since Sunday, the Farmers Almanac is predicting just as severe of a winter ahead for the United States.

For days the National Weather Service has had an excessive heat warning for several states, and for many of those in Virginia, Maryland, North Carolina, New Jersey, Pennsylvania, DC, West Virginia, Massachusetts, Maine, New Hampshire and Vermont can expect similar sweltering through Thursday.

Temperatures in and around the much of the Northeast, and portions of the Mid-Atlantic will see temperaturees in the mid and upper 90s, with the heat feeling like its in the triple digit range.

A bikini is one way to beat the extreme heat in Central Park, New York. Yana Villarni, 27, was trying to enjoy the sun in the park in her bikini but had even said ‘it was difficult in the heat’ 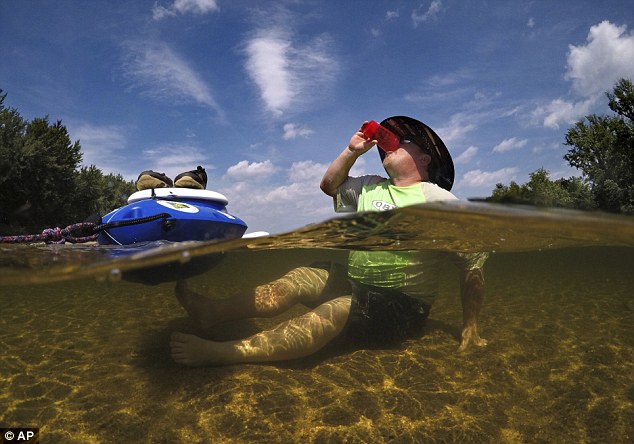 David Hoyt of Reading, Mass., enjoys an ice-cold seltzer water while seated alongside his anchored cooler in the Saco River in Fryeburg, Maine, where the temperature was 93 degrees F but the heat index made it feel like 103, Tuesday. The heat wave is expected to continue into Thursday morning 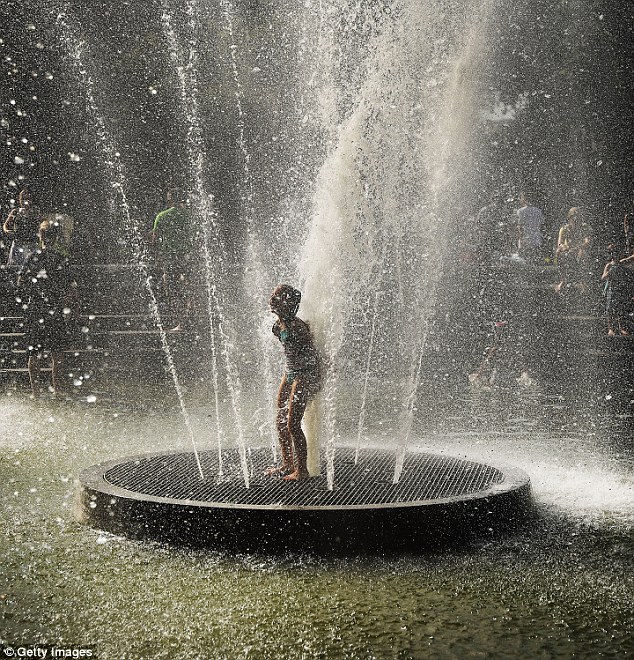 Wednesday the heat remained as oppressive as the rest of the week. A child cools off in a fountain at Washington Square Park in New York’s West Village Wednesday. The East Coast is being hammered with temperatures in the 90’s and a heat index making it feel more like 100

‘[Under a heat advisory] the combination of hot temperatures and high humidity will combine to create a situation in which heat illnesses are possible,’ the National Weather Service (NWS) explains.

‘With the school year getting started in many areas, it could be a very uncomfortable few days for students and teachers in schools without air conditioning,’ AccuWeather meteorologist Brian Thompson told USA Today.

Under an excessive heat warning, ‘the heat and humidity may cause heat stress during outdoor exertion or extended exposure. The very young, the elderly, those without air conditioning, and those participating in strenuous outdoor activities will be the most susceptible.’

In a sharp contrast, the Farmers Almanac, which is a go to source for long range weather predictions says states from the Continental Divide to the Appalachians should expect a particularly frigid winter ahead.

‘Contrary to the stories storming the web, our time-tested, long-range formula is pointing toward a very long, cold, and snow-filled winter,’ said editor Peter Geiger in a statement on the company’s website. 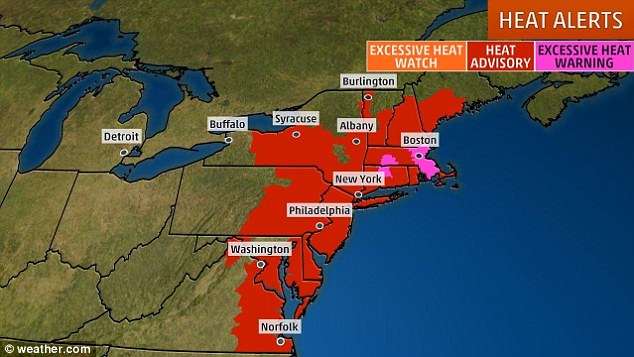 Seeing red? Try an AC, but while most of the Northeast is enduring oppressive heat, the Farmers Almanac is predicting a very cold and blustery winter ahead 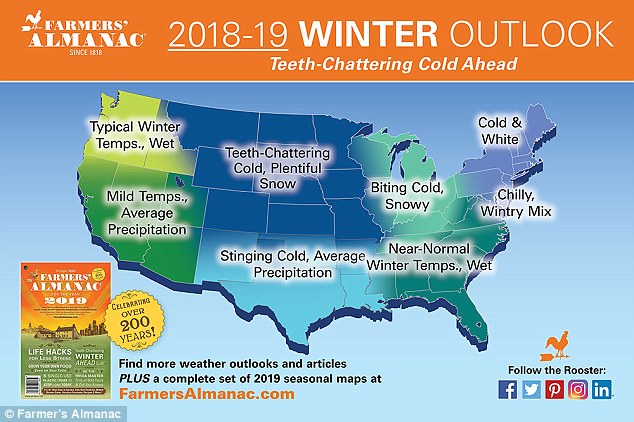 Shades of cold temperatures ahead: Farmers Almanac is predicting a frigid winter this year

In an interview, with USA Today Geiger said, ‘We start talking about the snows in the later part of November.’

The Farmer’s Almanac predicts the middle of the United States should expect the most snow, while the Great Lakes and a currently sweltering New England should expect an above average snowfall.

The coldest month by far this winter is predicted to be in mid-February, with an extended winter lasting till late March.

Enjoy the sun while you have it.