Farming family make $100m on sale of Merri Park, due to development potential on Melbourne fringes

Is Melbourne’s housing sprawl out of control? Chinese-backed firm buys family farm for $100million to create new suburb with 1000 houses

Melbourne’s already huge urban sprawl is about to get even bigger, after the sale of a long-held family farm on the city’s outskirts which will be filled with 1,000 houses.

The cattle-farming family have reaped more than $100million with the sale of the huge and historical 434 hectare property at Beveridge, about 12 kilometres north of the fringe Melbourne suburb of Craigieburn.

The property was originally bought by Cecil Looker, private secretary to Prime Minister Robert Menzies and later a chief of the Melbourne and Australian Stock Exchanges, in 1966.

A ‘hard man with a large chip on his shoulder’, Mr Looker and his wife Jean retired from Canberra life to the plains property and in 1968 even hosted Prince Philip, holding displays of boomerang throwing, sheep shearing and dog trials.

An aerial view of the Looker family’s 434 hectare Merri Park property, which sold to SIG Group for over $100million 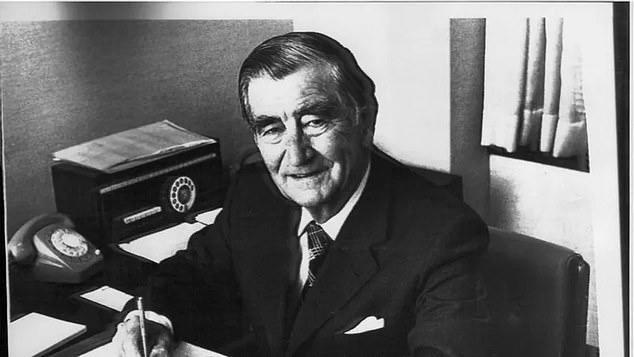 A year later he was knighted, becoming Sir Cecil.

His farm produced merino wool, before he switched to focusing on breeding Hereford and Angus cattle.

Sir Cecil was principal partner of stockbroker Potter Partners, led the Victorian Economic Development Corporation and also held positions including deputy chairman of Ansett Airlines, president of the RACV and Australia’s representative at the World Bank. 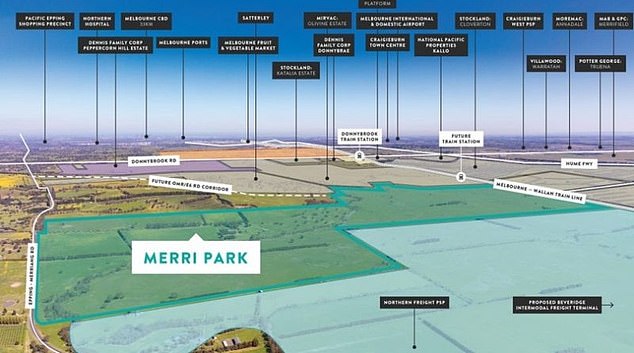 It sold for $100million plus, just over a decade after the Looker family began lobbying to have the land rezoned to make development on it possible, realestate.com.au reported.

A Chinese-backed Australian property developer, SIG group, bought the property, which is estimated at twice the size of the Victorian capital’s CBD.

According to the Australian Financial Review, title deeds show a caveat was placed on property by Merri Park DB Pty Ltd, a company which is directed by Xing Yu Lu and Jiacheng Zhang.

It is understood the rezoned land could accommodate up to 1000 housing lots within a new 110-hectare suburb, within the planned Donnybrook/Woodstock precinct.

The property also has parcels of 199 hectares and 125 hectares are expected to be used by industry.

The marketing agents have claimed it could support ‘$1.2 billion of commercial product’, realestatesource reported. 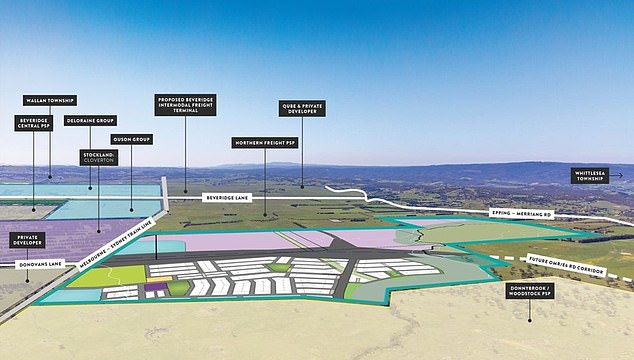 An illustration showing a planned suburb on Merri Park land north of Melbourne, with proposed nearby developments nearby

The agency confirmed the vendors has still farmed cattle on the property.

The Beveridge Intermodal Freight Terminal is planned for the area.

The rail freight facility is expected to host over 18,000 jobs.