Faryal Makhdoom announces she is BACK with Amir Khan

The couple have been married for four years and share a daughter together.

They first met when Faryal was 19 and Khan was 24 through mutual friends at a party in New York seven years ago.

At the time, the businesswoman, who runs a cosmetic company, was studying political science and journalism at Rutgers University School of Arts and Sciences in New Jersey.

In exclusive interview with You Magazine in April, she said when they met he said: ‘You’re like a girl I would marry’, and she thought ‘What a total bull*******.’

When he left they kept in touch over Skype, subsequently meeting again in London eight months later where the pair were photographed together outside Harrods.

They began dating shortly afterwards when he went to surprise her in New York. Three months later, the pair were formally engaged.

But weeks before the wedding in 2013 she was asked by Amir’s management team to sign a prenup.

She said during the interview: ‘In our culture, that’s really bad. I couldn’t care less about the money but my parents felt very insulted, especially because they are so well off. My parents didn’t make Amir sign a prenup.’ 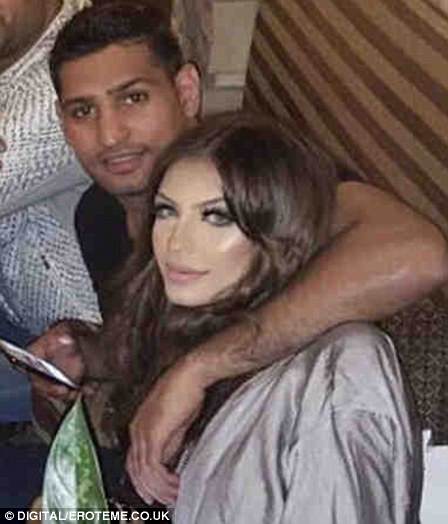 Faryal said she signed it nonetheless, but it was later cancelled by Amir when she fell pregnant with their daughter, Lamaisah. She was born in 2014.

They wed at Waldorf Astoria hotel in New York in front of 250 guests, followed by an elaborate celebration for 3,800 people in Bolton before she moved to the UK.

The pair lived a quiet and happy life for many years until the tail-end of 2016 when things began to sour.

In December, she launched an explosive rant on Snapchat, accusing Khan’s parents, Sajjad and Falak, of trying to destroy their marriage.

She even claimed her ‘evil, hating sister-in-law’ Mariyah ‘came to hit’ her while her husband was not at home.

However Mariyah responded to the allegations by saying: ‘Do I look like I can beat someone up?’

Faryal began her series of posts: ‘Don’t get your sons married if you’re going to abuse and bully the wife.

‘I’ve always been so quiet but seriously this message is for everyone! When you bring someone’s daughter – treat her as your own. Your son will be much happier & so will you. :)’

Using the Snapchat name Faryalxmakhdoom, she continued: ‘When you force your son to divorce his wife, when she’s nine months pregnant!!! And your son doesn’t … and he sticks besides his wife. He’s called a p***y?

‘Ok, I’m guessing Islam teaches us to get married and divorce our wives and treat them bad??? 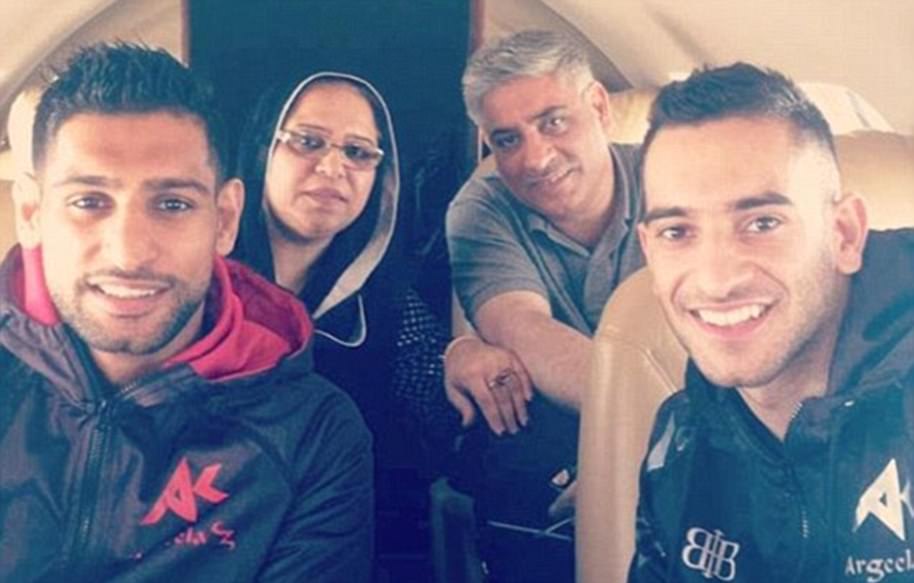 Khan is pictured with his mother, father and brother Haroon in a photo posted on Mariyah’s Instagram account

While she did not name anyone in the messages, she endorsed comments by her followers which suggested it related to her in-laws.

She also shared a screenshot of Mariyah laughing at a comment on Instagram which suggested Faryal should have been on the ‘dogwalk’ rather than the catwalk – a reference to Faryal taking part in the Asiana Bridal Show in Birmingham earlier that month.

Faryal added: ‘What have I actually done lol been a good wife to your broth.I worked my ass off on a catwalk from 7am till 12am at night.

‘My husbands a multi-millionaire but still work and do my own as I can never touch his BLOOD money, when I have a right too! and then I get hating evil sister in laws s******g on me?’

Mariyah responded by saying she ‘didn’t need to justify herself on social media as “Allah is watching”.’

Khan’s brother Haroon also appeared to have his say, posting on Twitter: ‘The world knows how good the khan family is #saynomore’

Khan’s brother Haroon also appeared to have his say, posting on Twitter: ‘The world knows how good the khan family is #saynomore’.

Faryal later published a photograph of Haroon, the other son of Khan’s parents Sajjad and Falak, lying on a bed naked and claiming he was drunk.

In an interview with Murtaza Ali Shah at Geo News, Khan’s parents rubbished Faryal’s allegations, claiming she is ‘lying’ they never laid a hand on her and treated her like their own daughter.

Mr Khan said: ‘Faryal was adopting a dress code which in the Islamic faith was not acceptable.

‘I ask Faryal to produce evidence of violence. Where is the evidence? We have always held her in highest esteem and gave her the same level of respect and love that we gave to our two daughters.’

Falak said her daughter-in-law has called them ‘paindoo’ – Urdu for ‘villagers’ – used as a slur for primitive people from the Pakistani countryside.

She said: ‘I am a proud Pakistani, I have always respected my in-laws and we have our traditions and values. No one abused Faryal and I once asked her to take dupatta (veil) and she didn’t listen and I never brought up the subject again.

‘Amir told us that she doesn’t listen to him and that we should tell her parents about that. We lived in the same house but Faryal never mixed with us. She called us “paindoo”. She has forgotten that the same paindoo parents gave birth to Amir Khan and brought him up’.

Khan released a statement on Twitter, describing the actions of both parties as ‘childish’.

He said: ‘I have supported my wife, and that’s because she was in the right.

‘Since I’ve been married I’ve seen how my family and siblings have treated her. It wasn’t fair. I’m not happy that it’s come out. It was a private matter and should’ve kept private.

‘My siblings were posting on social media over and over again. I asked my father to have them remove it and no one listened to me.

‘I was patient and kept quiet but FARYAL said she couldn’t take it anymore and had to speak up. So she did.

‘I supported her when it came to family bothering her or upsetting her. But I did not support siblings or my wife to be this childish all over the media, crying and bashing one another. It’s really getting out of control and needs an end.’

In January, the couple’s relationship was strained after a sex tape, featuring Khan performing a sexual act on webcam as female model watched on, was published on major US pornographic website.

It was claimed the X-rated video was made shortly after the couple married in 2013.

Faryal was said to be ‘absolutely disgusted’ by the revelations, but continued to have a united front with her husband by posting a series of jokey Snapchats together. 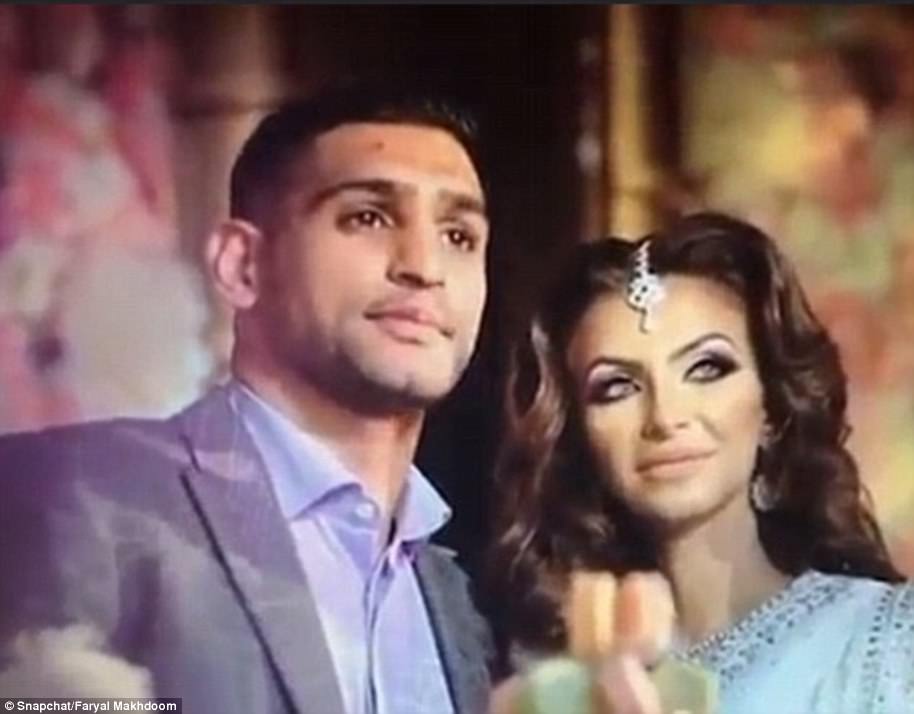 Earlier this year, Faryal relived their daughter’s glittering £100,000 birthday party last year by posting photos and videos of the event

Tensions between the boxer and his family deepened when he failed to attend Haroon’s wedding due to training.

Haroon was said to be ‘bitterly disappointed’ about his brother’s absence, but Faryal hit back saying she didn’t go because she was not wanted.

On Snapchat, she said: ‘Everyone’s been asking why I didn’t attend Amir’s brother’s wedding. I kept quiet.

‘But the truth is AMIR’S wife and child were not invited. Or even included in the celebrations.

‘They could have at least tried.’

The claim came after Haroon revealed that his brother ‘didn’t even send a message of congratulations’ after the event.

Haroon responded: ‘We, family, friends, are all shocked and saddened by what his Faryal has been saying but we tried to forget about the negatives at the weekend and just enjoyed.

‘She is a one off and lives by her own set of rules.’

At the end of January, Khan revealed his father Shah, who was his manager, his uncle Taz Khan, formerly his consultant and lifelong best-friend Saj Mohammed, who was his assistant, were all no longer working with him.

He told SportsMail’s Jeff Powell: ‘I have had to grow up and take control of my own life. 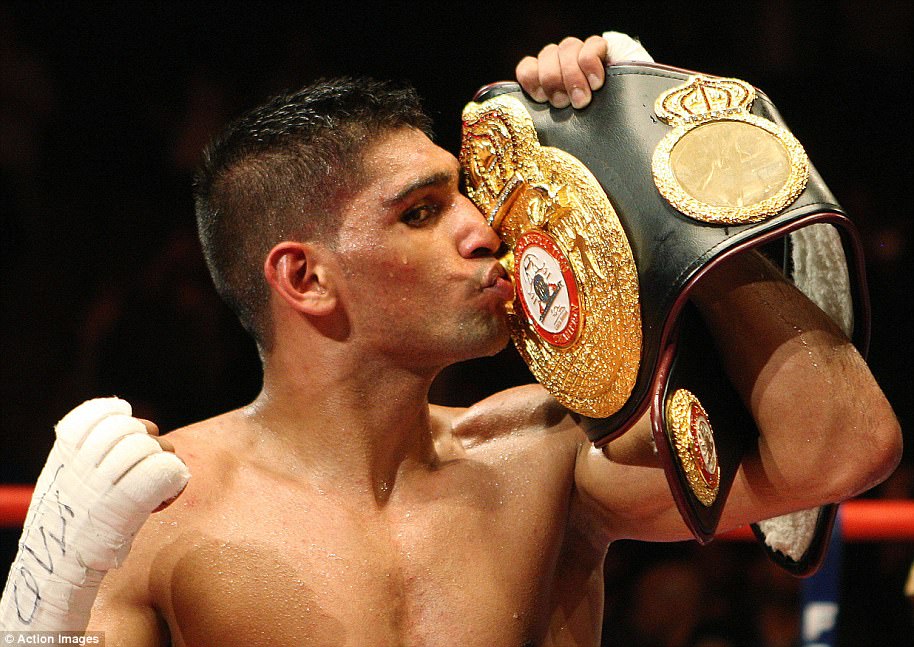 Khan later revealed his father, uncle and life-long best friend Saj Mohammed, were all no longer working with him

‘Dad won’t be negotiating my contracts any more but I love them and they have been so good for me. But I’ve matured now and come to realise it is best to keep the two elements of my life apart.’

But his father was said to be ‘humiliated’ by his very public sacking.

A family friend told MailOnline. ‘Credit for that goes to Faryal who got Amir to do it.’

The couple continued to remain strong and even announced plans to adopt a child in the new future.

Speaking to The Sun, Khan said: ‘When I was in Africa, I met so many young African kids and I loved them.

‘I wanted to take them back home with me.’

In June, the couple put their six-bedroom home in Lostock on the market for £1.6million. Two days ago, they knocked £200,000 off the asking price.