Have you ever wondered how pilots are guided through the incredibly crowded skies of America, where 43,000 flights take place a day?

This fascinating animation from the Federal Aviation Administration (FAA) reveals just how it’s done, with a step-by-step explanation of the processes involved.

Using an example of a five hour and ten-minute flight from Los Angeles to Baltimore, it shows how 28 controllers in 11 command centers are involved with the journey, with each expert monitoring progress meticulously – as there are normally around 5,000 aircraft in the sky at any one time.

The animation takes viewers through the process, from take-off to landing.

The first step is the pilot contacting the Los Angeles tower Ground Controller and requesting permission to taxi to the runway for departure, the video explains.

The pilot is cleared for take-off by the Los Angeles tower Local Controller and is airborne one minute later.

The tower Local Controller tells the pilot to contact the Southern California approach control facility (Tracon) and the Tracon controller instructs him or her to climb to 17,000 feet.

The pilot is then cleared to climb to 23,000 feet by the first controller in the LA Air Route Traffic Control Center.

After this a controller in the next sector clears the pilot to ascend to 35,000 feet.

Shortly after this, controllers in the Albuquerque Center take over. 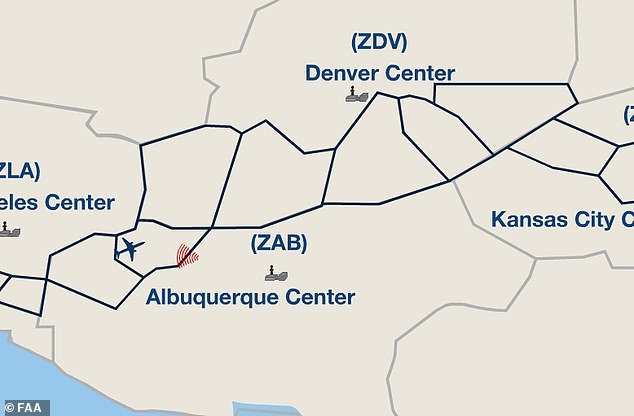 While airborne, the pilot is instructed to contact various control facilities to receive guidance 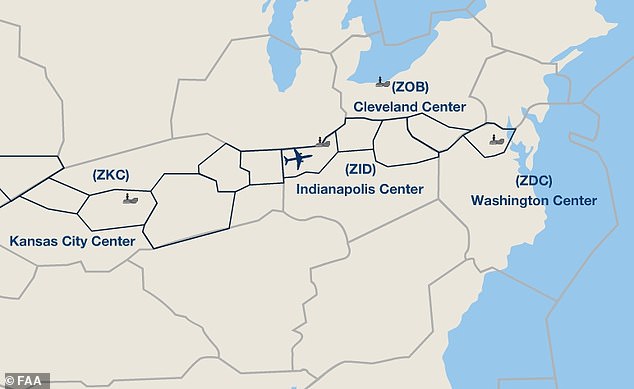 Along the way, most of the controllers were monitoring progress of the plane on computer screens hundreds of miles away from it

The FAA says that controllers in adjoining sectors communicate with each other to make sure the altitude change is safe.

Dinner service is now under way and the plane enters Denver Center’s airspace, then the Kansas City Center sector.

Then it’s on to the Indianapolis Center sector and the Cleveland Sector.

Then the Washington Center tells the pilot to descend to 15,000 feet and to contact approach control.

The plane then descends to 4,000 feet and contacts the local controller at the Baltimore-Washington Airport air traffic control tower.

It makes a safe landing and a ground controller guides it to the gate.

Along the way, most of the controllers were monitoring progress of the plane on computer screens hundreds of miles away from it.

HOW 43,000 DAILY FLIGHTS OVER AMERICA ARE COORDINATED

The FAA coordinates up to 43,000 flights in the U.S. per day, managing 70 per cent of the world’s daily operations. With 5,000 aircraft in the nation’s skies at any given moment, numerous experts from government agencies and the aviation industry work seamlessly through a process called collaborative decision making to manage current and future constraints in the system.

They discuss flight planning, weather, runway construction, the movement of dignitaries, and other issues that may impact the system.

About 600 high-tech employees work at the two facilities to ensure the safe and efficient operation of the National Airspace System.