No wonder they call it the Queen of the Skies – it brought air travel to the mass market, has two decks and has the highest cruising speed of any current airliner (mach 0.855/650mph).

The Boeing 747 has definitely cemented its place in aviation history – and these incredible pictures show the beginning of its story as it celebrates the 50th anniversary of its launch this weekend.

They show the very first model to roll off the production line, the first commercial flight and, comically, how it was too big for some hangars.

The origins of the aircraft date to the early 1960s when Boeing’s then chief Bill Allen was approached by Juan Trippe, head of now-defunct Pan Am Airlines, to build a bigger plane to address the growing problem of airport crowding.

Boeing originally considered a fully double-decked aircraft, but the companies were concerned that it would be difficult to evacuate it in case of an emergency, opting instead for a twin-aisle ‘wide body’ design with an upper forward deck. The massive jet required the construction of the enormous 747 assembly plant in Everett, Washington, the world’s largest building by volume.

Since it rolled off the production line on September 30, 1968, more than 1,500 747s have been delivered, and 500 are still in service. Now 50 years on, the 747 is being phased out of service in favour of the Boeing 777, which is believed to be more cost effective for airlines. Scroll down for a memory lane fly-past.

Boeing president Bill Allen and the CEO of the former Pan Am airline Juan Trippe (right) celebrate the launch of the Boeing 747 ‘jumbo jet’ in 1968. The longtime friends finalised a deal on selling the aircraft to Pan Am with a handshake while on a fishing trip 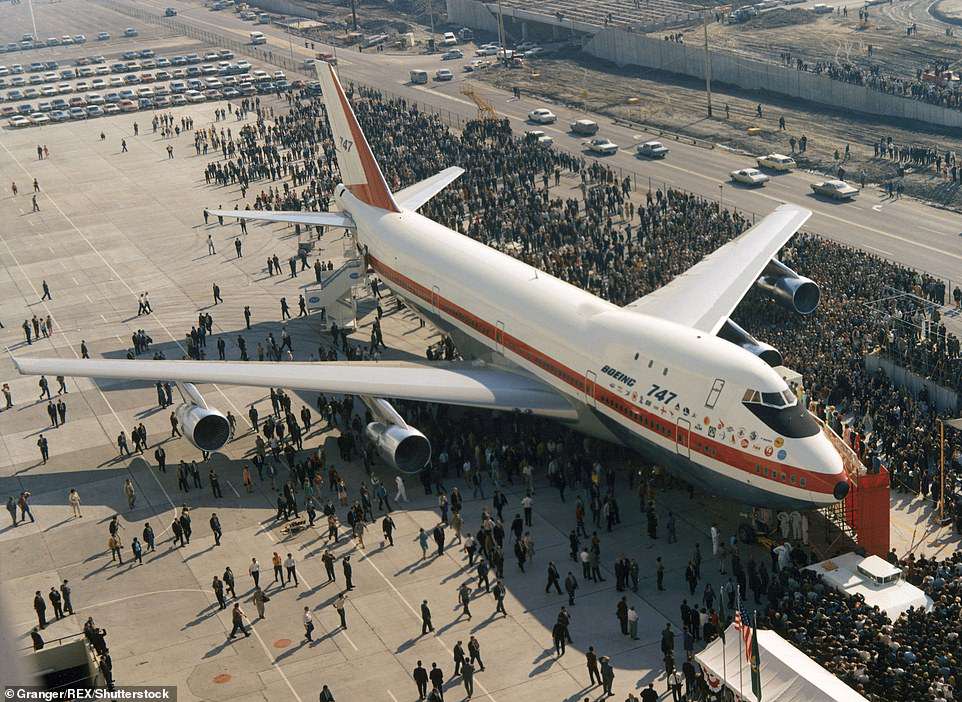 After the first Boeing 747 rolled off the production line at the Boeing plant in Washington state, all of the company’s employees gathered on the tarmac to celebrate their achievement 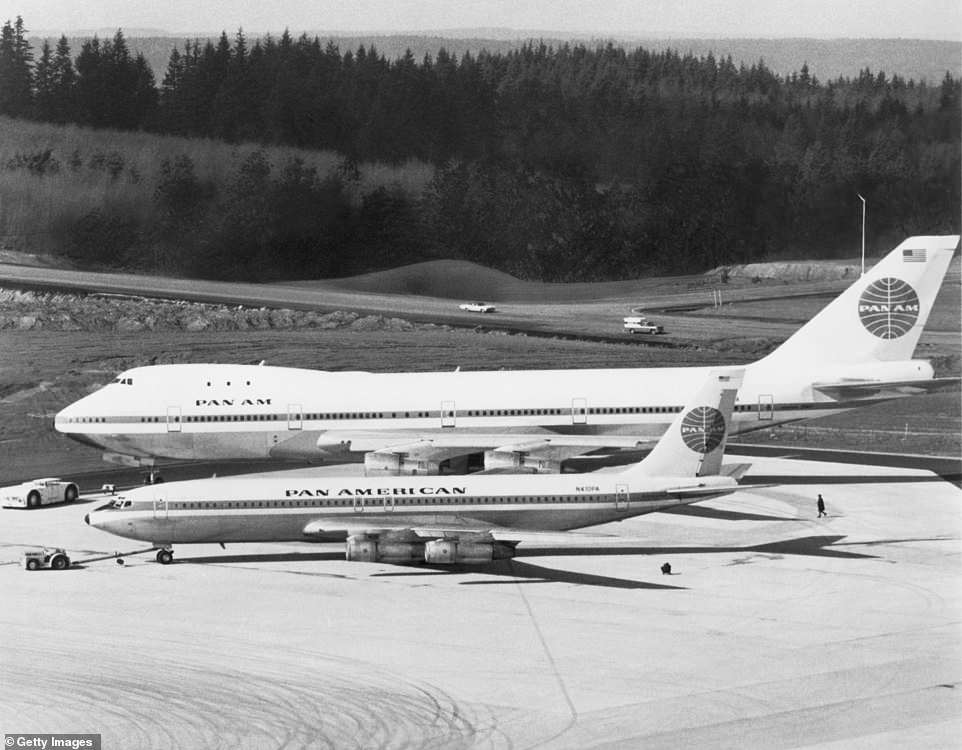 The vast size of the 747 is readily apparent in this picture at the Boeing plant of one parked next to its ancestor, the Boeing 707-321B 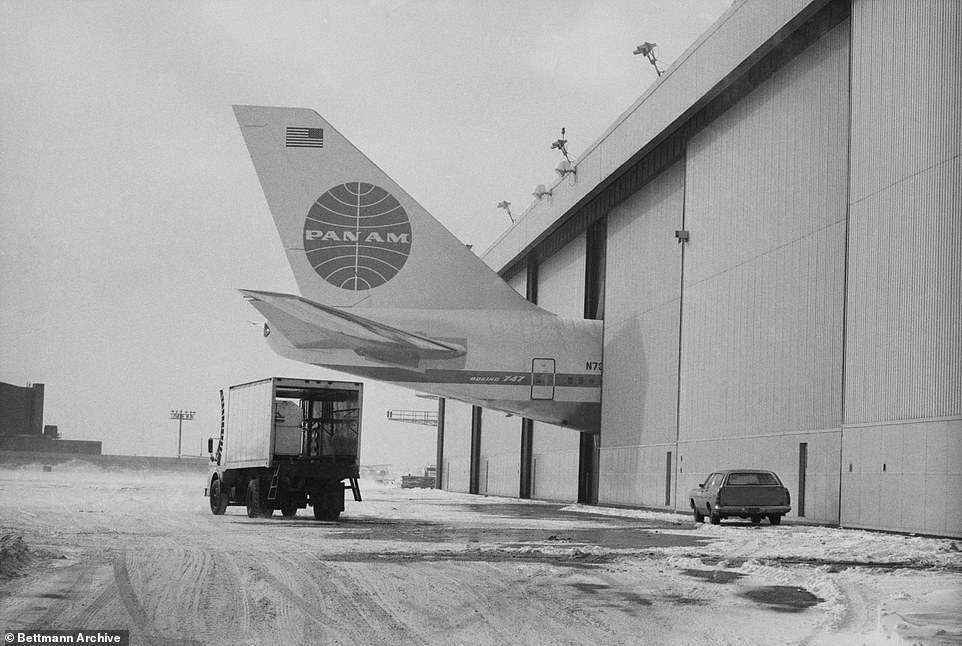 The Boeing 747 was so much bigger than other planes of the time that they often were unable to fully fit into hangars, as this comical image shows 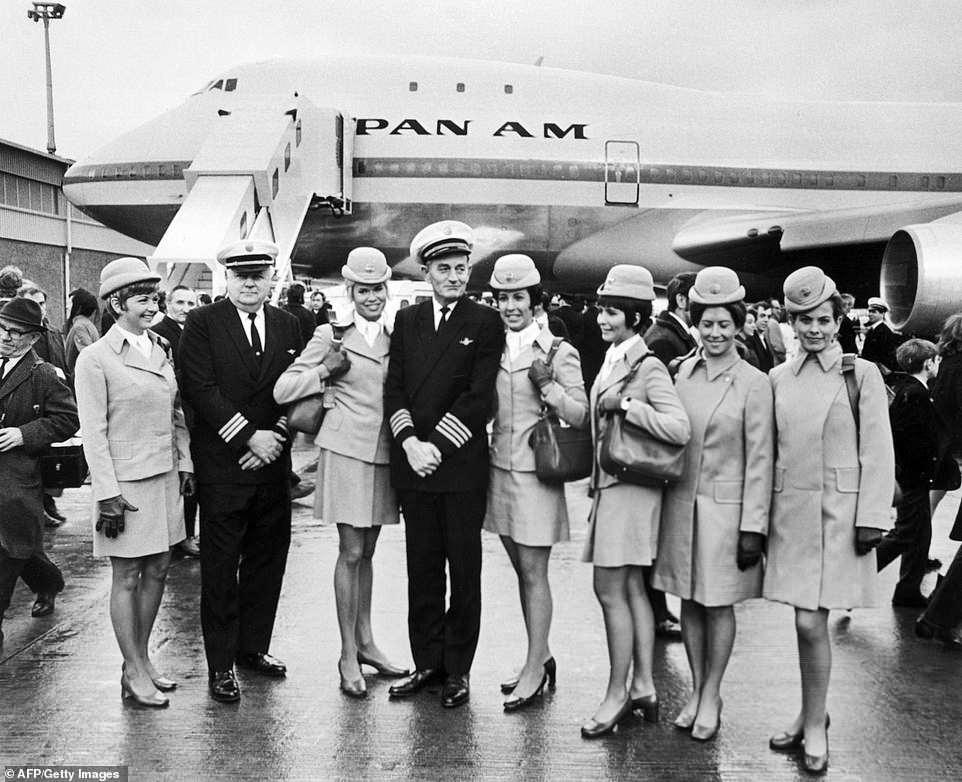 This picture shows a 747 on the tarmac in January 1970 in New York ahead of the model’s first commercial flight. In the foreground are the flight crew and some of the cabin crew that made the historic journey 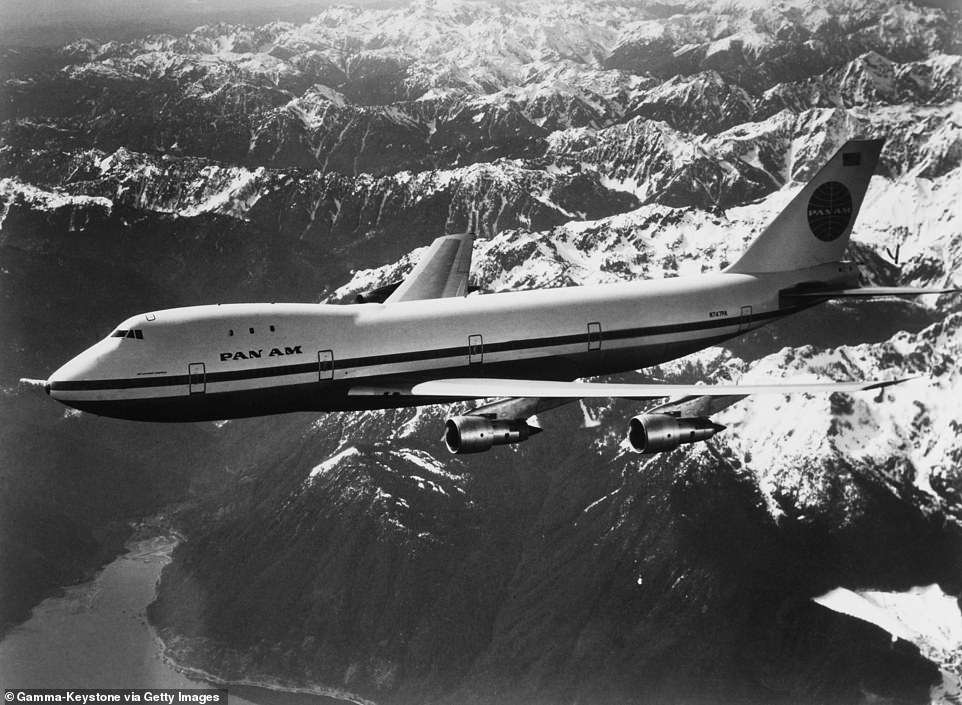 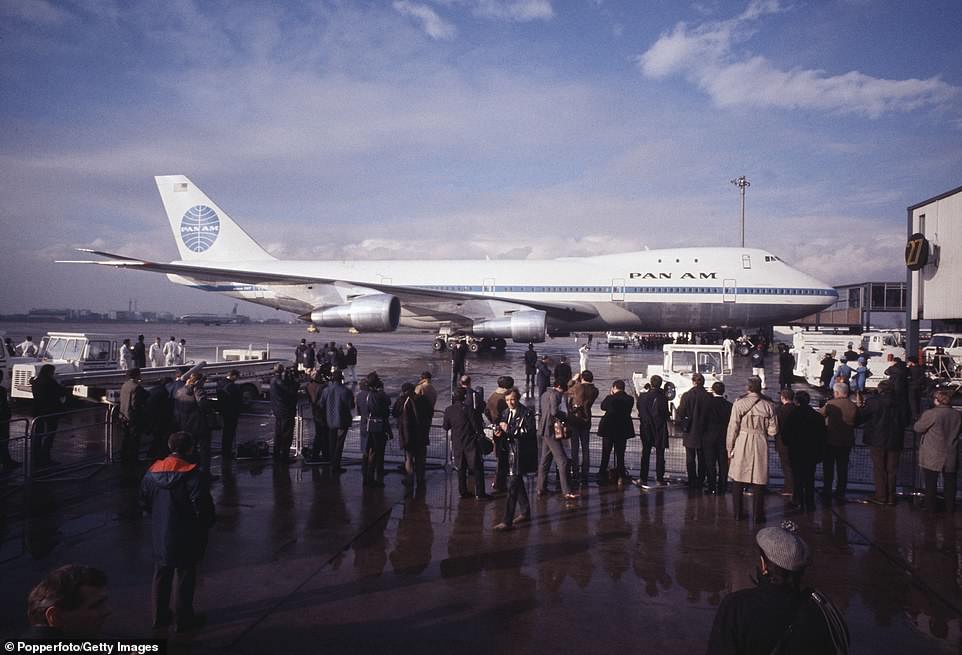 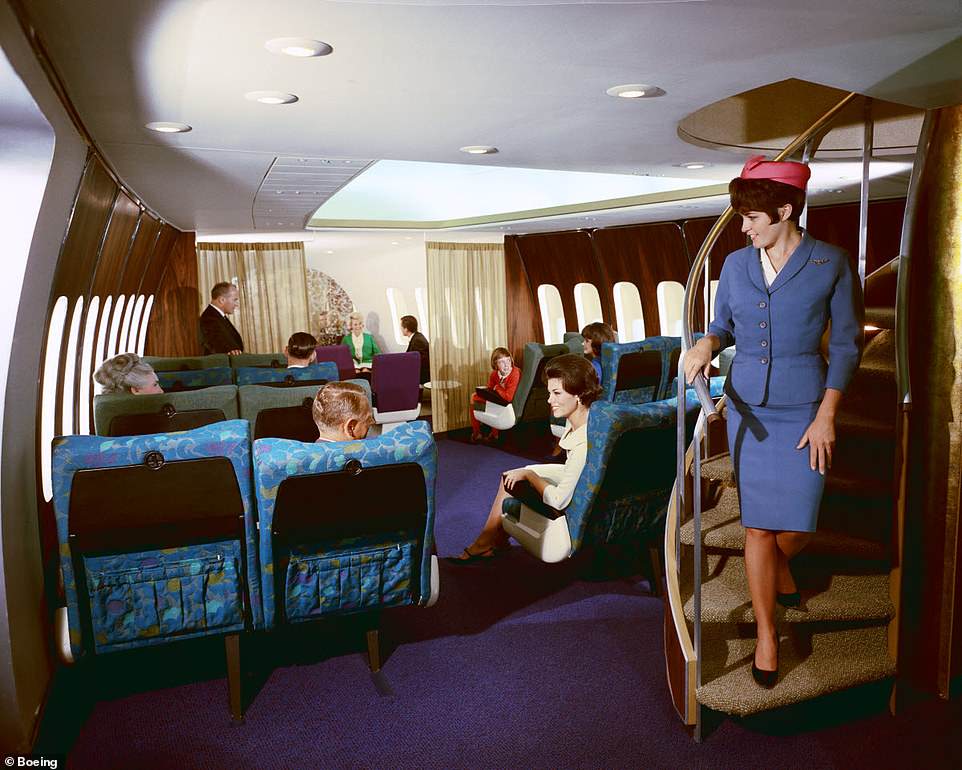 The 747 was known not just known for its technological achievements but also for its glamour. With a lounge, cocktail service and sometimes even a piano, it held the promise of an elegant, relaxing travel experience 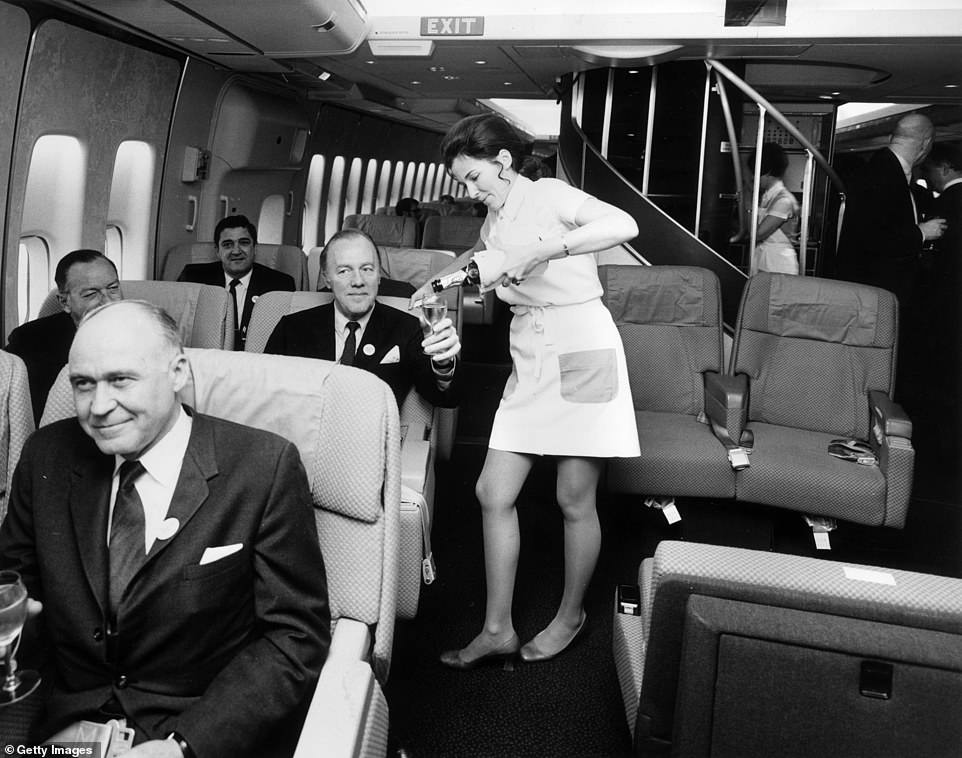 The first class cabin of a 747 Pan Am jet featuring a flight attendant pouring champagne for passengers. Over 1,500 747s have been built 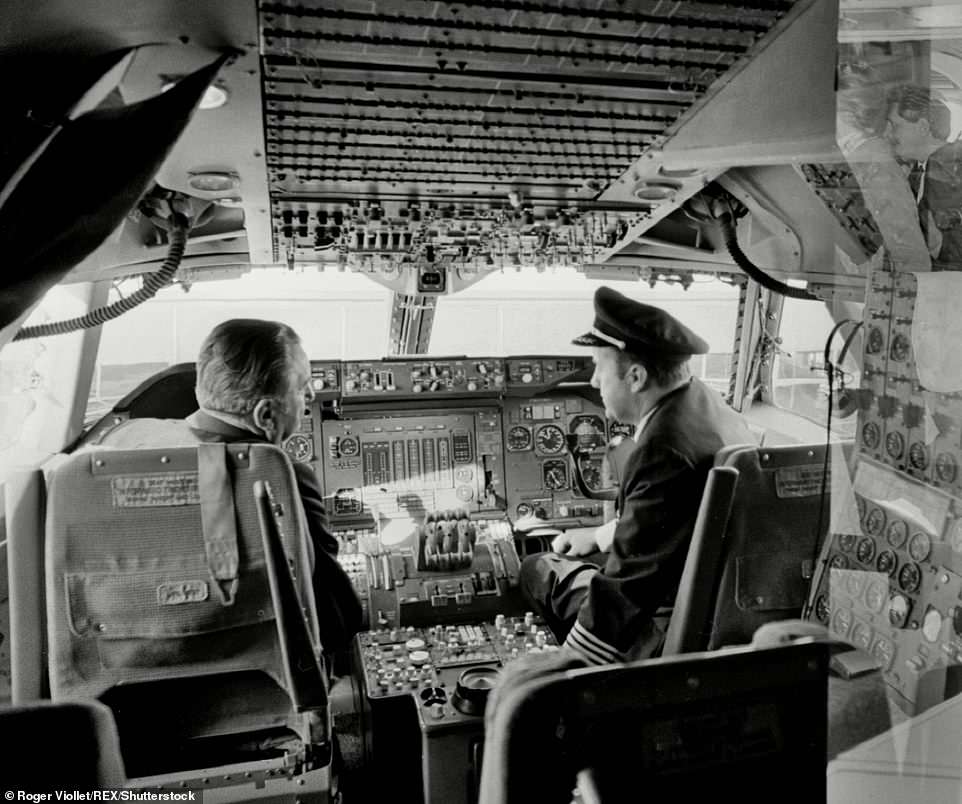 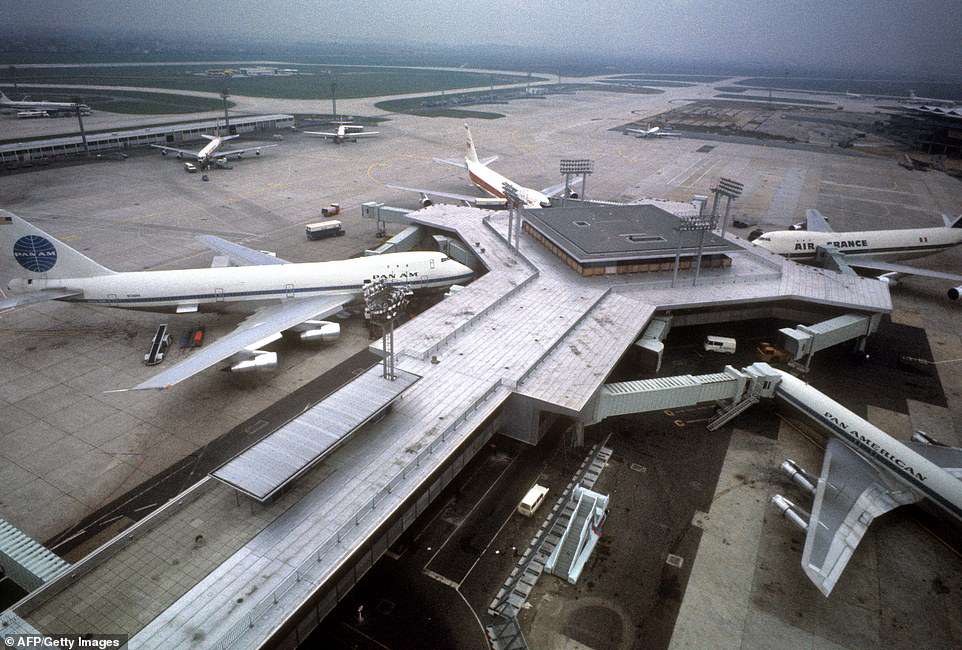 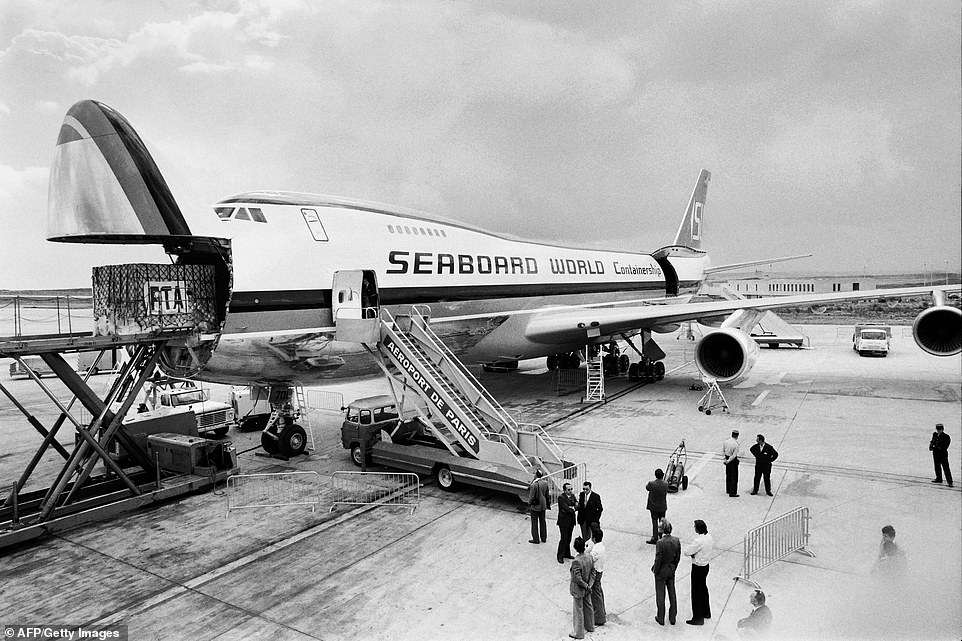 A Boeing B747 ‘containership’ freighter of Seaboard World Airlines is loaded through the nose door in August 1974 on the tarmac of Roissy Charles de Gaulle airport. Seaboard’s first 747 freighter entered service on the New-York-Paris line