World War II ended more than 75 years ago but, as an intriguing new book reveals, the remnants of the six-year conflict can be found all over the world, from Hawaii to the English coast and from the Red Sea to Iceland.

Illustrated with more than 150 unique photographs, Abandoned World War II Aircraft, Tanks and Warships (Amber Books Ltd) by Chris McNab ‘allows the history buff and general reader to explore the detritus of this great, destructive conflict in every part of the world’.

McNab writes in the introduction: ‘For six unprecedented years in human history, almost the entire globe thundered to the sounds of war, lit by strobe-like flashes of gunfire and explosions. Despite the passage of more than seven decades since the end of the war, the physical evidence of that conflict remains prolific and poignant.

‘Some of it is small in scale… some of it is open and defiant – many wartime fortresses still sit powerfully above coasts or atop mountains. We should ultimately be glad that they and the world around them are now silent.’

Scroll down to see some of the fascinating images featured in the book.

T-34’S, DUKLA PASS, SLOVAKIA: ‘The Dukla Pass on the Polish–Czech border was the site of a major battle between German defenders and advancing Soviet forces from September 8 to October 28, 1944,’ says McNab. ‘These T-34 tanks stand as memorials to an oft-forgotten clash that cost 70,000 casualties’ 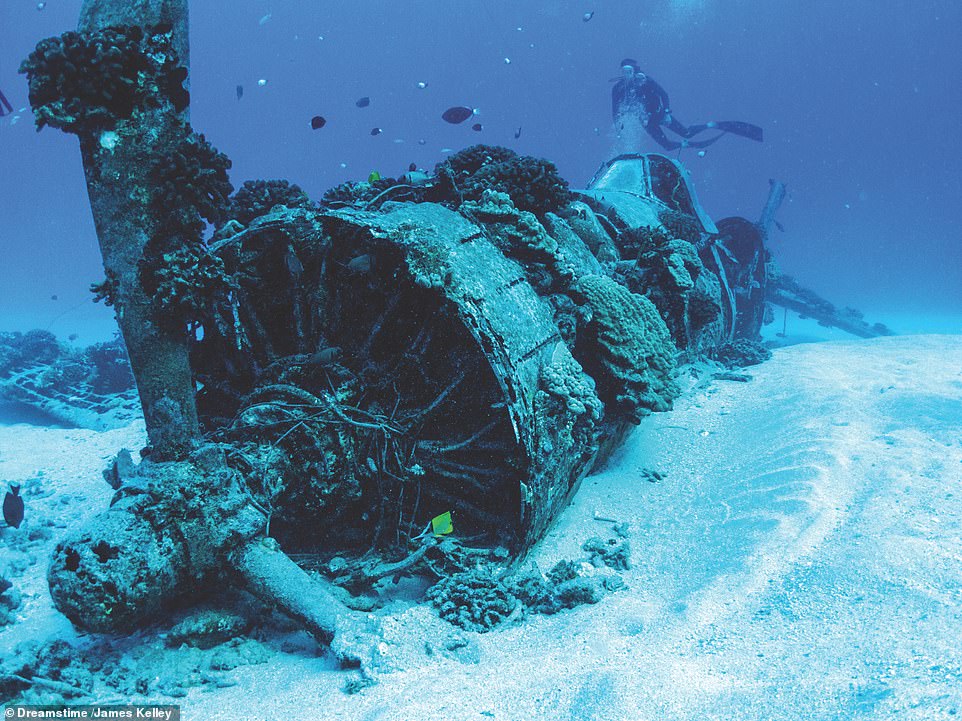 VOUGHT F4U CORSAIR, OAHU, HAWAII: A diver hovers peacefully over the wreck of a Vought F4U Corsair. The author explains: ‘Although this particular aircraft was a veteran of World War II, it actually ended its flying career in 1948, when a routine flight ended in engine failure and ditching. The pilot was unharmed and was later rescued’ 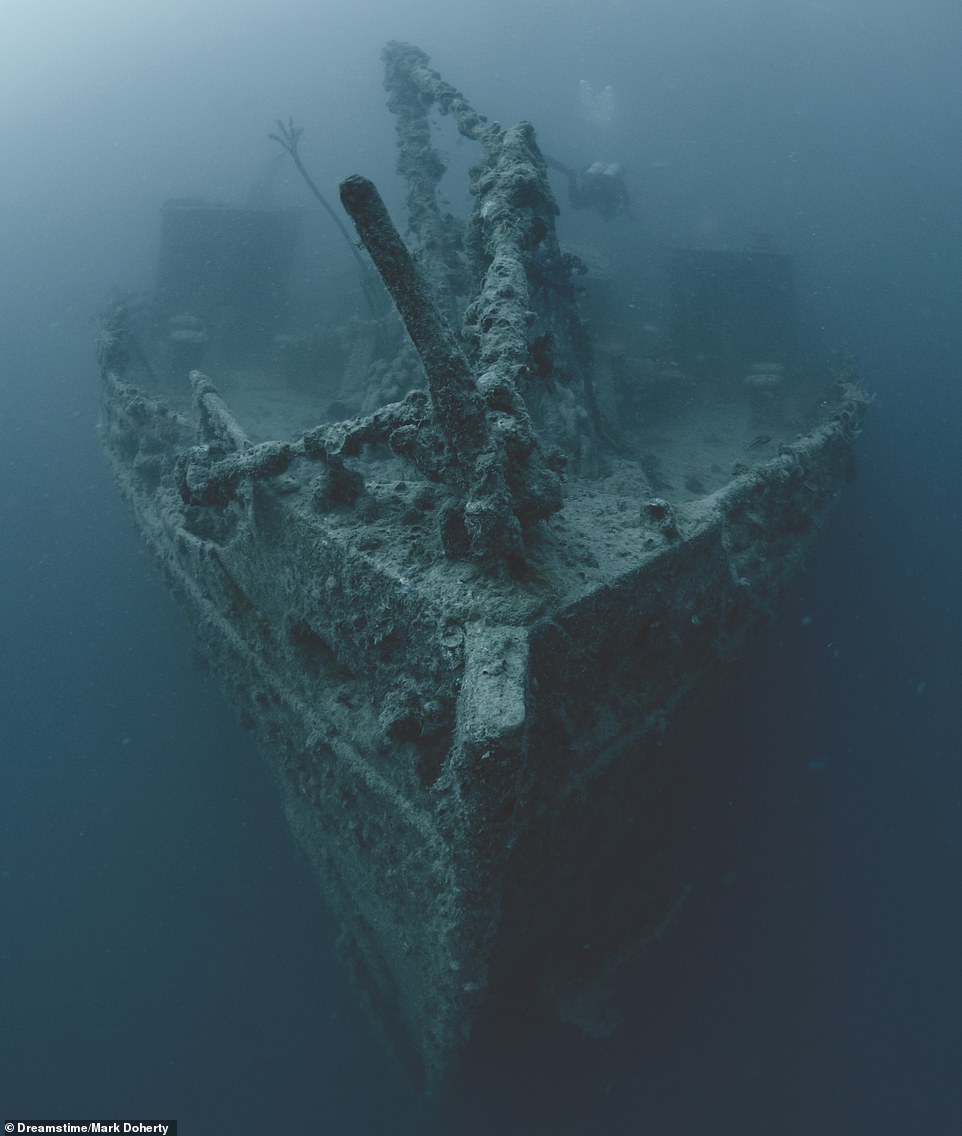 ROSALIE MOLLER, RED SEA: According to McNab, the Rosalie Moller was a coaling vessel, transporting Welsh coal around Royal Navy bases in the UK and out to the Mediterranean and Red seas. He adds: ‘On October 7, 1941, while hazardously static at anchor in the Red Sea, waiting for a blockage to clear in the Suez Canal, the ship was bombed and sunk by two Heinkel He 111 bombers making a low-level strike’ 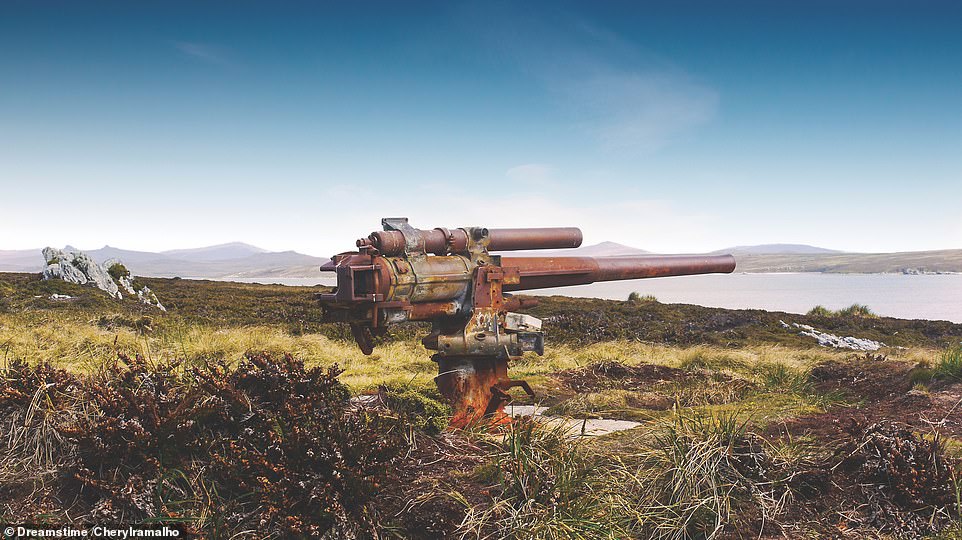 QF 4IN MARK IV NAVAL GUN, GYPSY COVE, PORT STANLEY, FALKLAND ISLANDS: ‘Despite their extreme distance from the main European battlegrounds, the British Falkland Islands in the South Atlantic were still deemed vulnerable to German, and later Japanese, naval incursions,’ according to McNab. ‘This Vickers QF 4in (101mm) Mk IV naval gun was one of a pair mounted to watch over Port Stanley’ 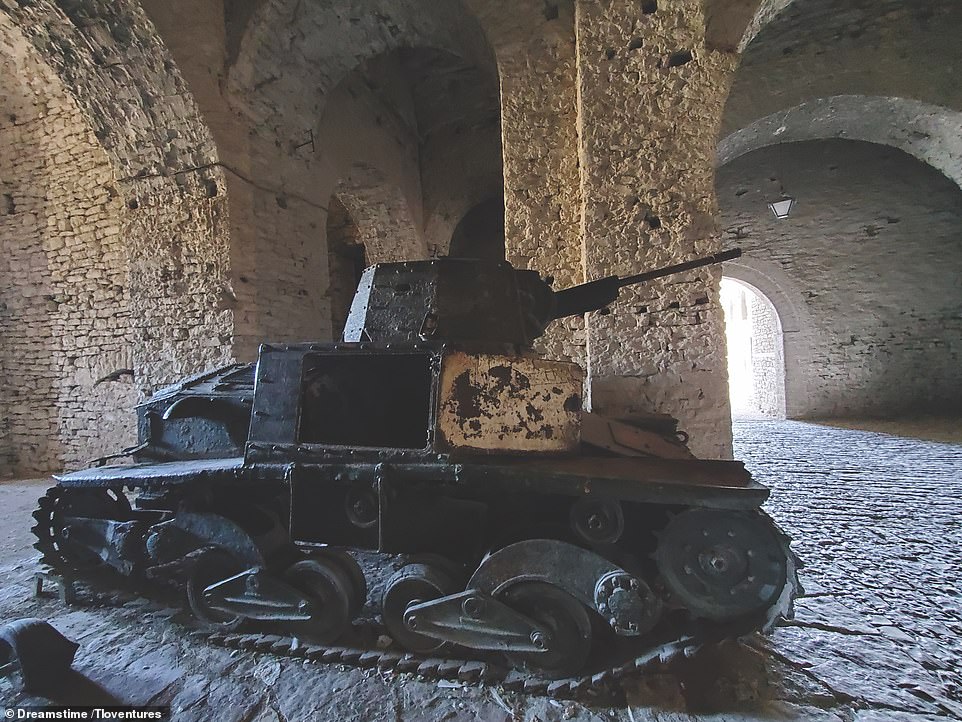 L6/40 TANK, GJIROKASTER, ALBANIA: ‘The L6/40 light tank was an Italian armoured vehicle that saw combat service in the Balkans, the Soviet Union, North Africa and the Italian campaign,’ the book reveals. ‘The vehicle here is one of only three surviving L6/40s and is located in the Gjirokaster Fortress in Albania, a fortress that dates back to the 12th century’ 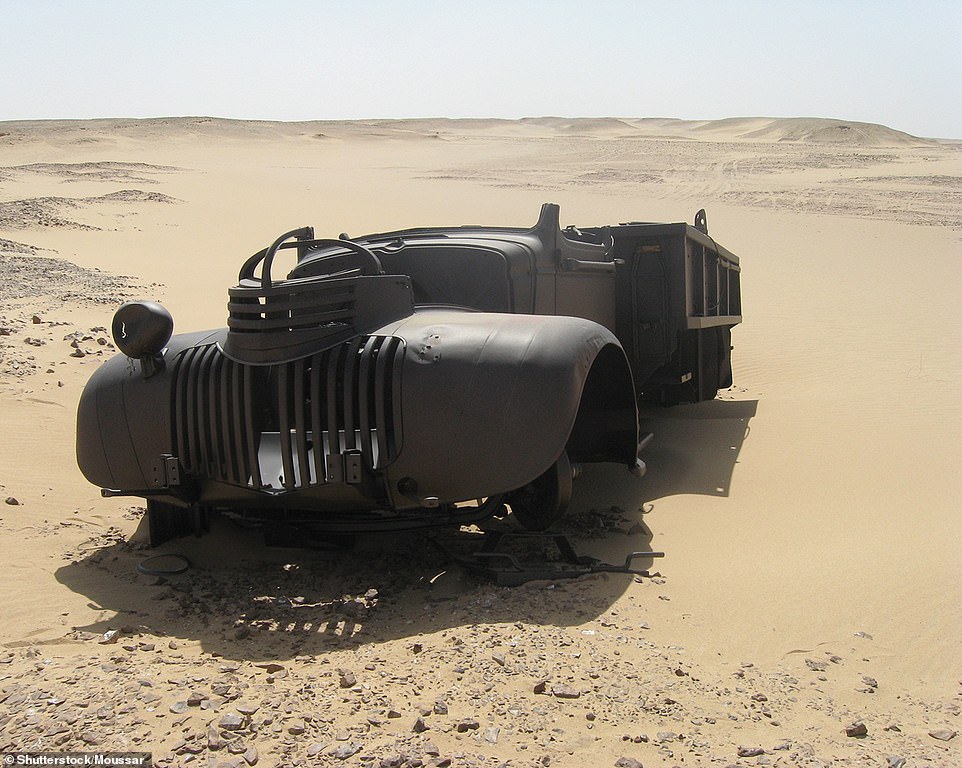 WRECKED VEHICLES, TOBRUK, LIBYA: McNab explains that Tobruk was one of the most contested places in the North African war, under Axis siege for 241 days. He adds: ‘Military equipment is still scattered around the port city, including Allied trucks. This one appears to be a Chevrolet Modified Conventional Pattern (MCP), a Canadian-produced vehicle’ 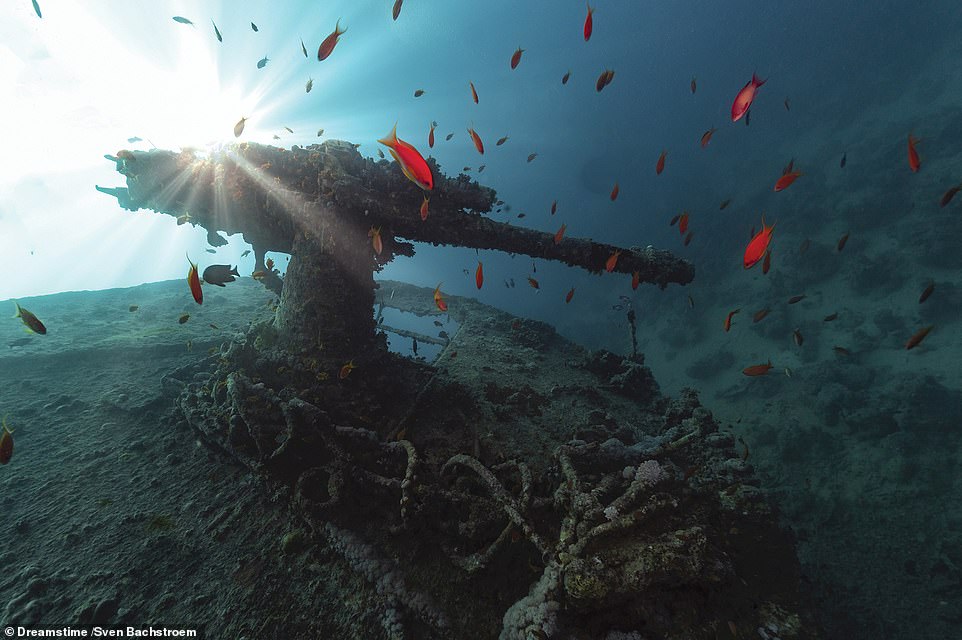 SS THISTLEGORM, NEAR RAS MUHAMMAD, RED SEA: ‘The wreck of the British merchant navy ship SS Thistlegorm was discovered by none other than the legendary French diver Jacques Cousteau in the early 1950s, although its location was subsequently lost then rediscovered in the 1990s,’ explains McNab. ‘Following her launch in April 1940, the ship made three perilous voyages across war-torn waters – to the United States, Argentina and the West Indies – carrying everything from rum to aircraft parts. On her fourth voyage, from June 1941 to Alexandria, she carried a huge stock of trucks, weapons, ammunition and even two steam locomotives. On October 6, however, the ship was bombed while at anchorage near the Straits of Gubal. She caught fire, exploded and sank in less than a minute. Nine of her crew died. As these photographs indicate, the wreck is today an undeniably fascinating dive site, within easy reach for Egypt’s tourist divers’ 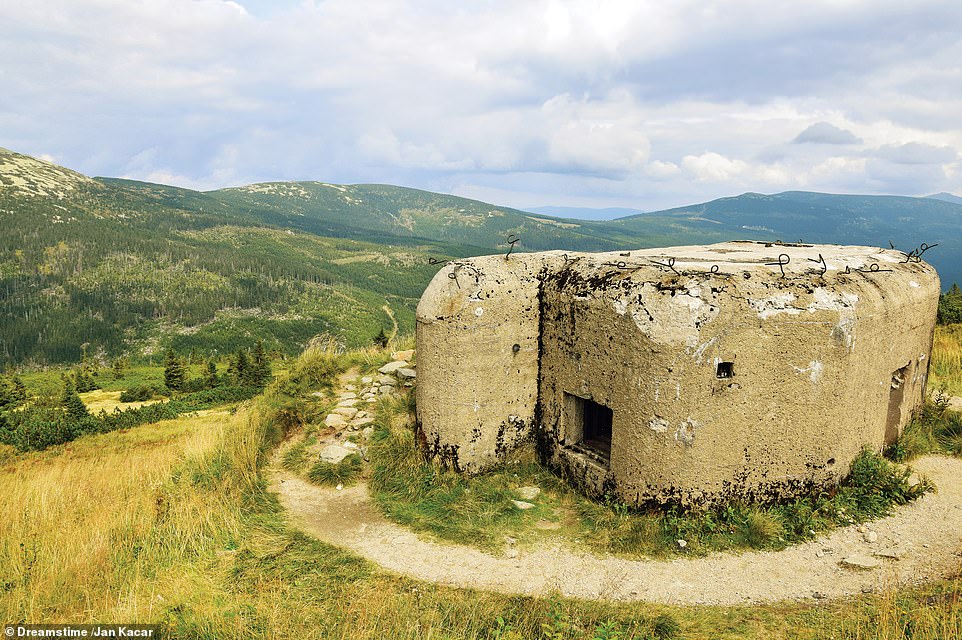 BUNKER, BUSH-KRKONOSE, CZECH REPUBLIC: According to McNab, the mountainous borderlands between Czechoslovakia and Poland offered good terrain for elevated defensive positions. He writes: ‘This Czech Army hilltop bunker was likely built during the 1930s, in what is today the Krkonose Mountains National Park’ 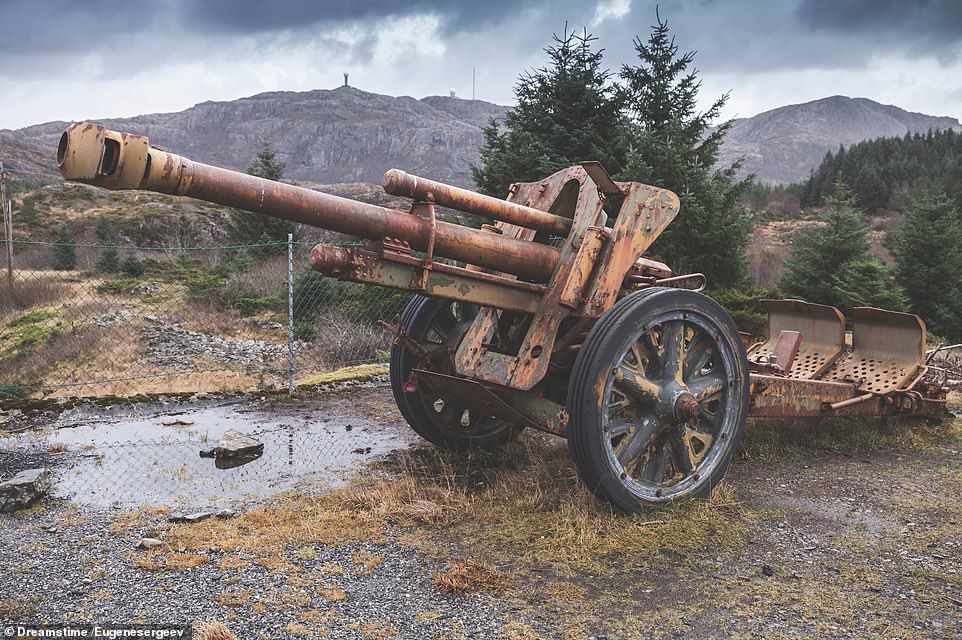 GERMAN HOWITZER, TRONDHEIM, NORWAY: ‘This German artillery piece is a 10.5cm leFH 18M light howitzer,’ writes McNab, ‘one of the most prolific pieces of artillery in the German arsenal, with more than 22,000 examples produced. It was the standard German divisional field howitzer’ 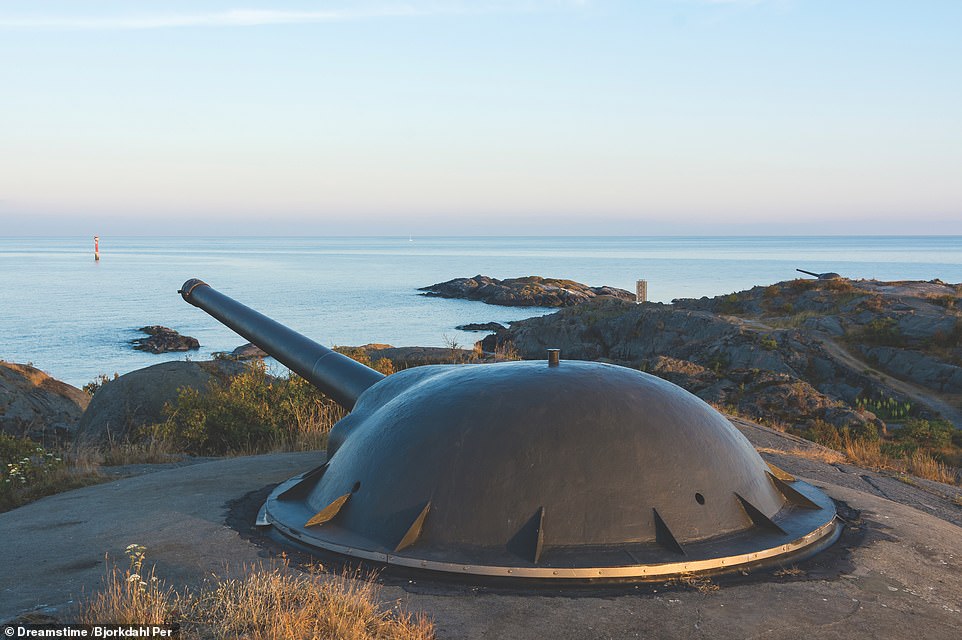 LANDSORT COASTAL ARTILLERY BATTERY, OJA, SWEDEN: ‘Although Sweden was a neutral country in World War II, the European tensions of the 1930s and the onset of war in 1939 meant that it took its defence seriously,’ says McNab. ‘Here we see 152mm caemated guns on the island of Oja, emplaced during the late 1930s. Oja was the home of coastal batteries until 2007’ 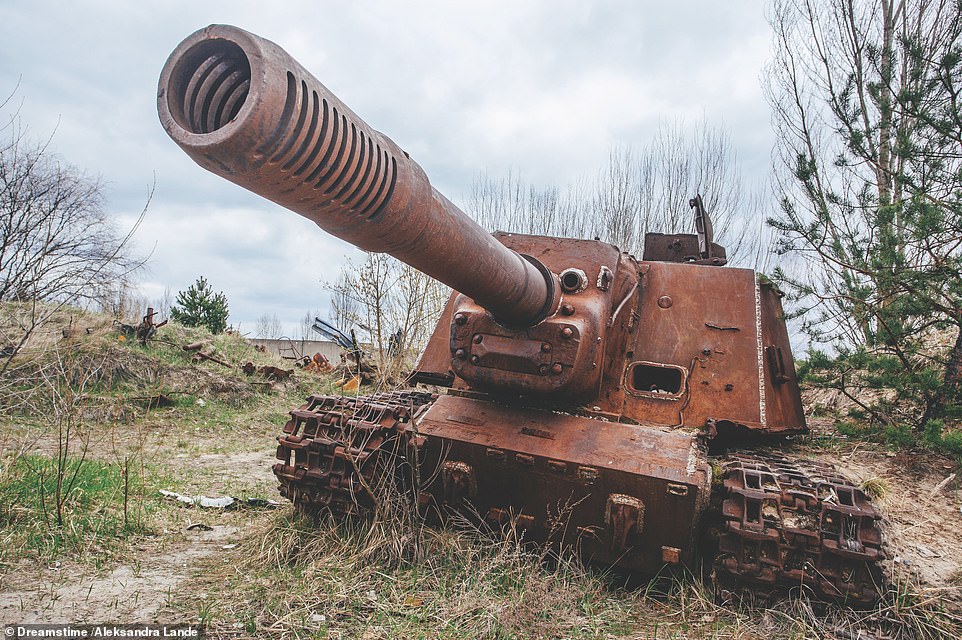 ISU-152 SELF PROPELLED GUN, CHERNOBYL, UKRAINE: Chernobyl is historically famed for its tragic and devastating nuclear accident in 1986, but it was also the scene of heavy fighting between German and Soviet forces in 1943, reveals McNab. He says: ‘The ISU-152 was a World War II creation, designed as an armoured monster with a crushing 152mm (5.98in) main gun to take on the German Tigers and Panthers. This specimen was used in 1986 to demolish radioactive concrete buildings after the disaster at the power plant, in the tragically mistaken belief that the thick armour would protect the crews inside’ 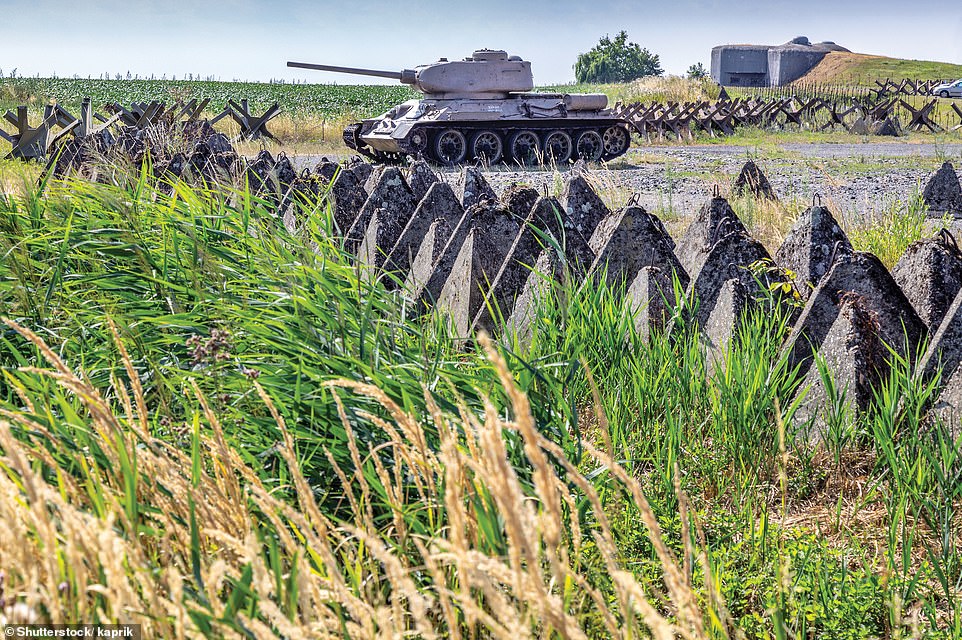 FORTIFICATIONS, HLUCIN, CZECH REPUBLIC: According to the author, the fortifications at Hlucin in the Czech Republic are ‘yet another example of European defensive thinking in the 1930s, these being constructed between 1935 and 1938’. He adds: ‘Framing a T-34 tank, here we see a blockhouse (top right) and a series of tank traps’ 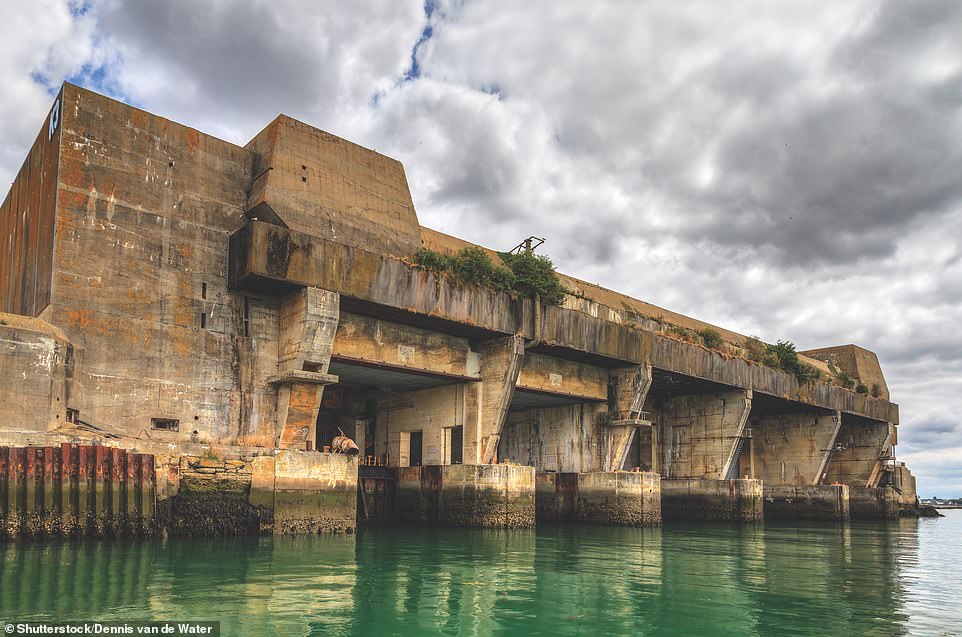 LORIENT SUBMARINE BASE, LORIENT, FRANCE: With the fall of France to the Germans in mid-1940, the Kriegsmarine set about establishing protected Atlantic bases for its U-boat fleet. McNab writes: ‘Here we see the formidable Keroman 3 (K3) U-boat pen at Lorient. With wet cells for housing seven U-boats, the K3 pen was virtually impregnable to conventional bombing, courtesy of a roof 7.6m (25ft) thick, including a one-metre (three-foot) air gap in the middle to disperse explosive force. On August 6, 1944, an RAF bombing raid hit the bunker with a 5,454kg (12,000lb) “Tallboy” bomb, but the structure was not penetrated. Even today the complex of storage cells evoke a sense of physical defiance’ 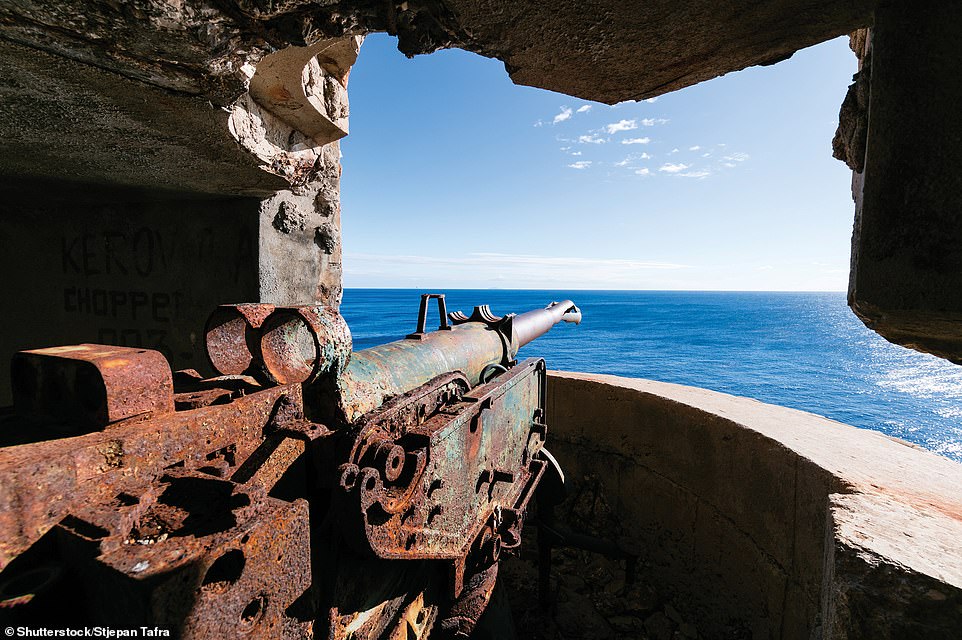 COASTAL GUN, VIS, CROATIA: A derelict coastal gun position looks out over the shimmering waters of the Adriatic Sea. McNab writes: ‘During the war, the island was used as a base by Yugoslavian partisans, the British No.2 Special Service Brigade and even some US Army Rangers’ 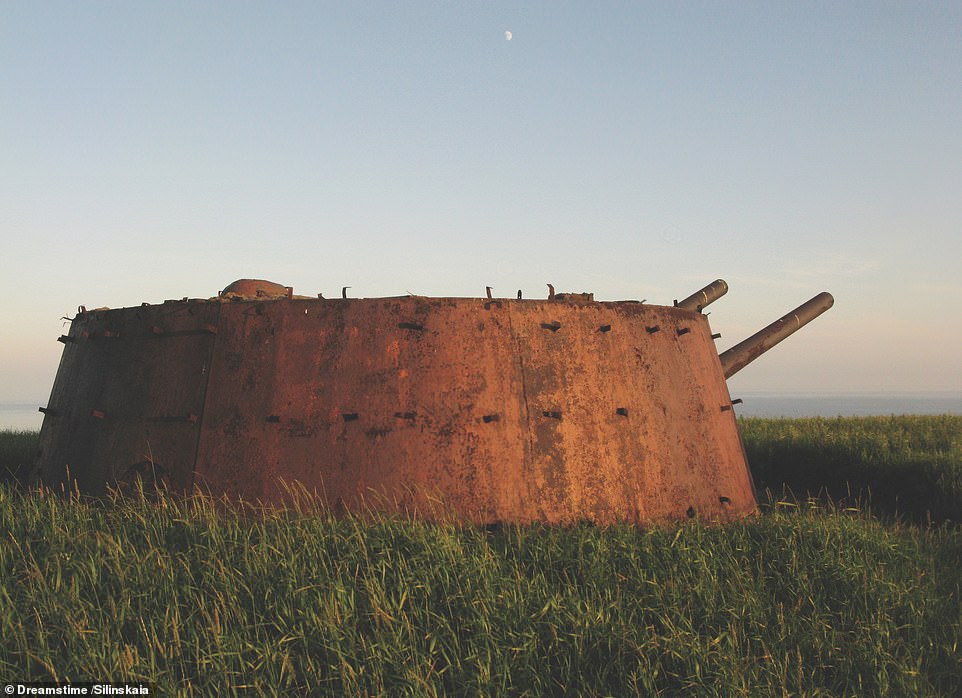 COASTAL ARTILLERY, ASKOLD, FOKINO TERRITORY, RUSSIA: Askold is an island in Peter the Great Bay of the Sea of Japan, 50km (31 miles) southeast of Vladivostok city. The book states: ‘Between 1936 and 1939, the island was heavily armed with coastal batteries, including these turreted twin 180mm (7.1in) MB-2-180 guns, which were trained over the entrance of Ussuri Bay and approaches to Strelok Bay and Vostok Bay. The gun positions seen here sit atop underground towers, each containing working compartments, ammunition stores, reloading facilities and crew quarters. Each gun position was connected to its neighbour by underground passageways, totalling nearly one kilometre (0.6 miles) in length. Today, the isolated location of Askold means that the batteries are reasonably well preserved’ 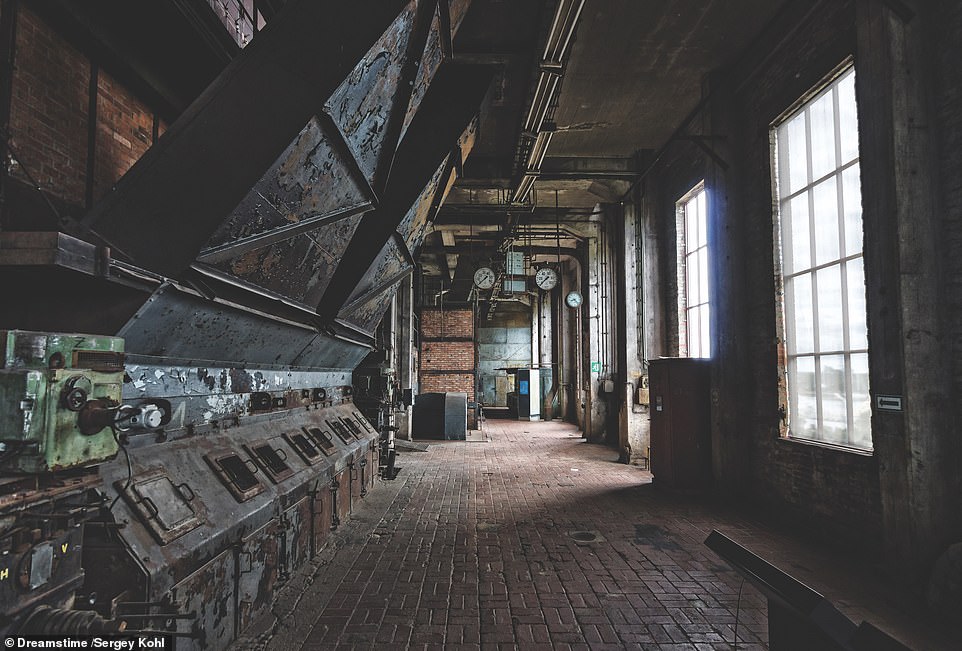 ROCKET PRODUCTION WORKSHOP, PEENEMUNDE, GERMANY: McNab says: ‘World War II transformed the village and seaport at Peenemunde on the Baltic coast into a hub for research into advanced weaponry, specifically the V-2 ballistic missile. Peenemunde was originally intended as the manufacturing facility for the V-2, but the Allied Operation Hydra bombing raid in 1943 prompted the Germans to move production to the underground Mittelwerk (Central Works) in the Kohnstein, Thuringia’ 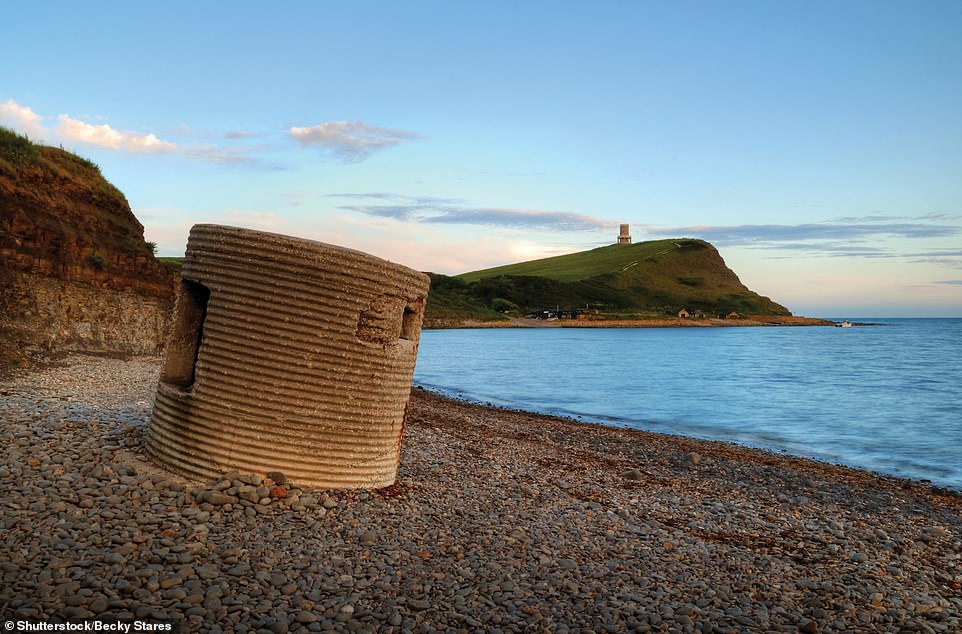 PILLBOX, KIMMERIDGE ISLAND, ISLE OF PURBECK, DORSET: ‘This abandoned pillbox, tilted crazily by time, was one of thousands emplaced around the British coastline in 1940,’ explains McNab. ‘It is a circular Type 25 pillbox, which featured an entrance at the back (visible here) and three embrasures for rifles or light machine guns’ 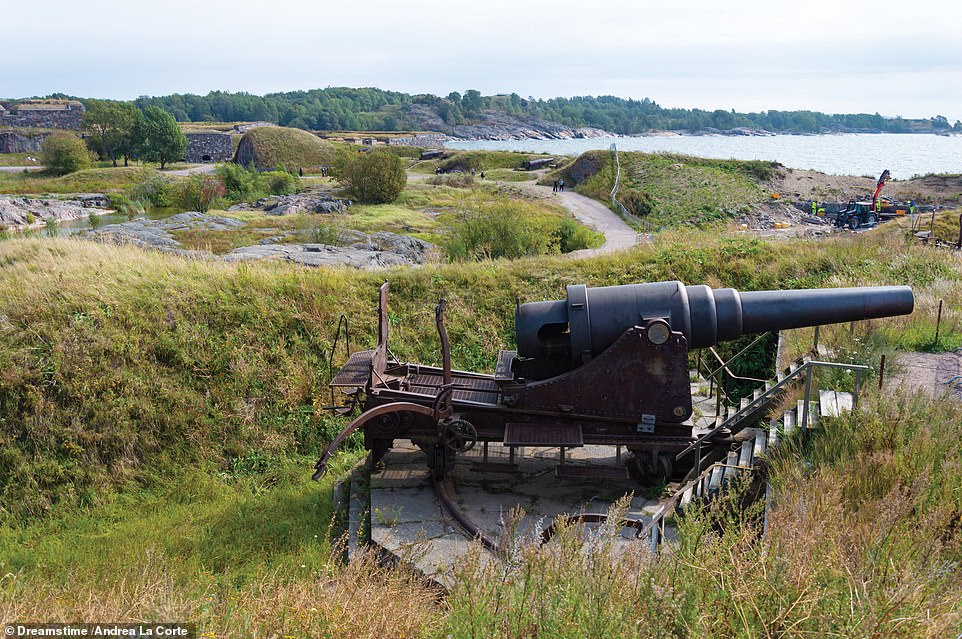 A 228MM (9IN) GUN, SUOMENLINNA FORTRESS, HELSINKI, FINLAND: According to the book, construction on the Suomenlinna (‘Castle of Finland’) Fortress began in 1748 and continued off and on until the 1970s, when it was handed over to civilian administration. It adds: ‘Such is the extent and continuing power of the fortifications that they were added to Unesco’s World Heritage List in 1991. The powerful nine-inch (228mm) gun seen here, set on a gliding mount, was one of several heavy-calibre weapons emplaced in the late 19th century, but which continued to serve during World War II, when the fortress was a base for the Finnish submarine fleet’ 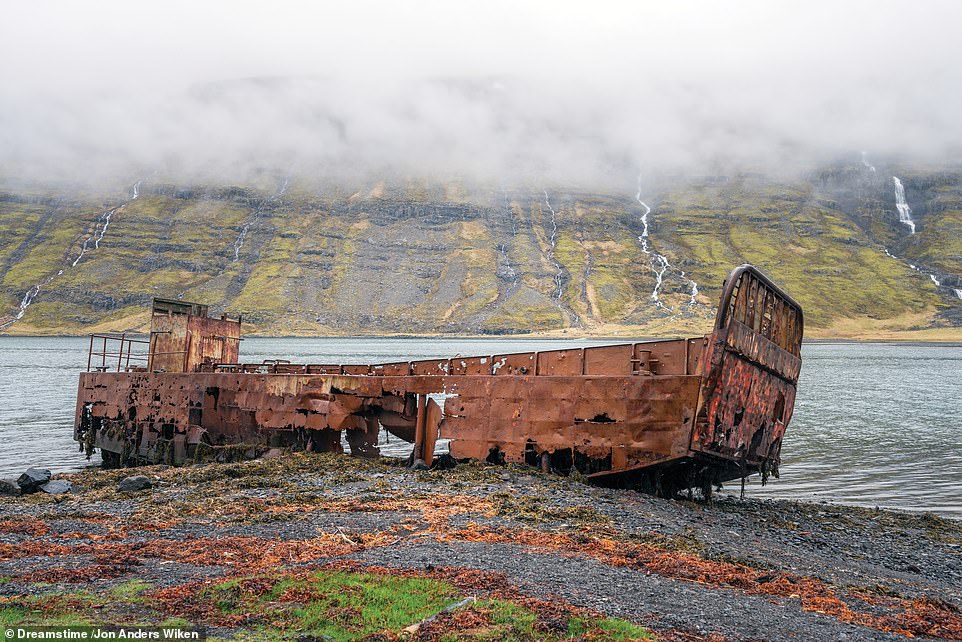 LCM, MJOIFJORDUR, ICELAND: ‘Rusting on the freezing shoreline within an 18km (11-mile) fjord, this US Navy Landing Craft Mechanized (LCM) was actually purchased as war surplus by Icelandic farmers following the end of hostilities in 1945,’ writes McNab 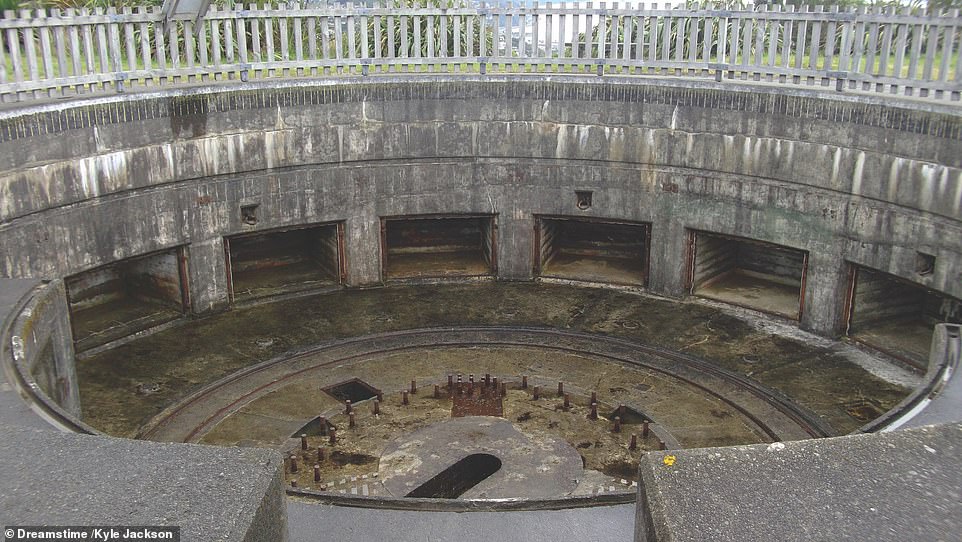 WRIGHTS HILL FORTRESS, WELLINGTON, NEW ZEALAND: This sweeping, empty gun emplacement is part of the Wrights Hill Fortress, a coastal artillery position built between 1942 and 1947. The book reveals: ‘The fortress received two 9.2in (234mm) Mk XV guns on Mk IX mountings – the largest land batteries ever constructed in New Zealand – but the weapons were only test-fired after the war, and ironically were later sold as scrap metal to the Japanese’ 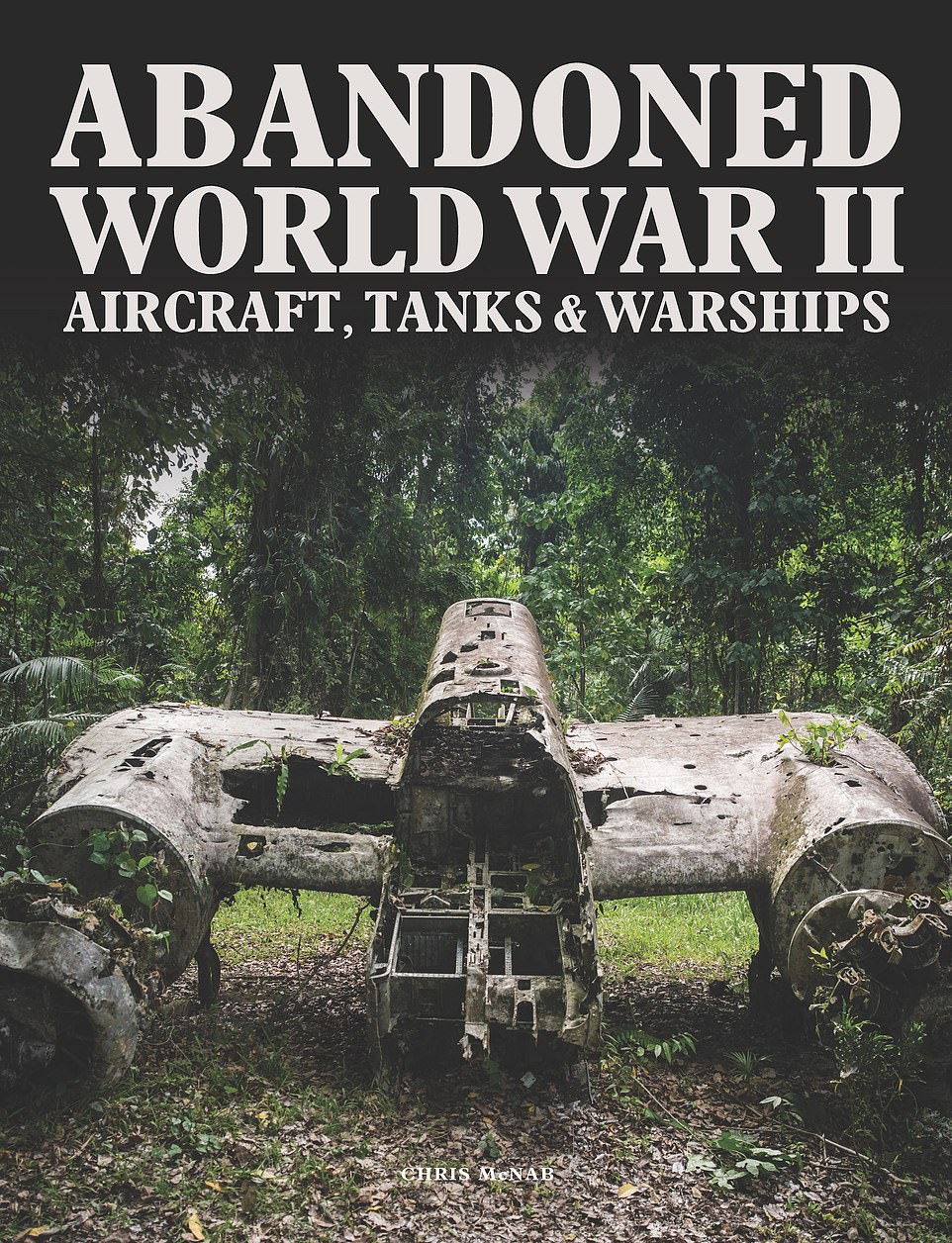