Berlin today is one of the world’s hippest, most affluent cities – a cultural powerhouse and a mecca for party animals.

But just over 30 years ago it was a city torn in two, divided by a wall measuring 91 miles. On one side was capitalist West Berlin, on the other communist East Berlin. Anyone who tried to get over it was shot.

To mark the fall of the Berlin Wall Radio Free Europe photographer Amos Chapple visited the precise locations of 14 striking photos taken when the city was split – in the 1950s, 60s and 70s – and took 2019 versions of those scenes. And the contrasts – or lack thereof – are fascinating. 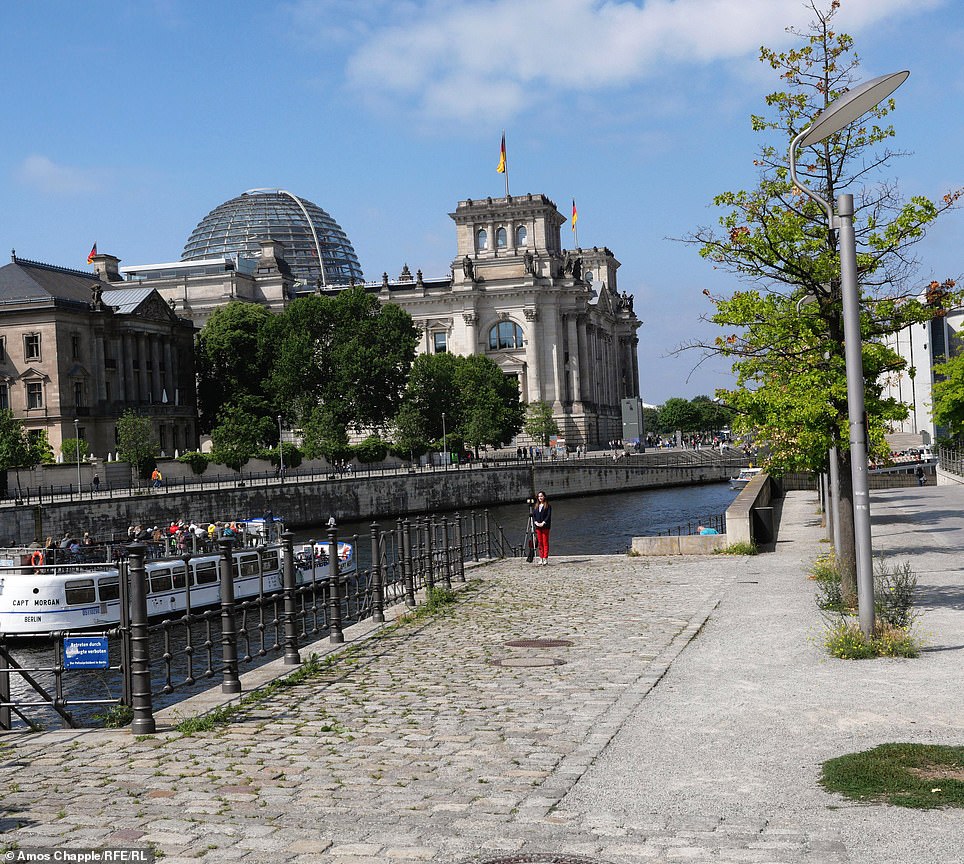 The Reichstag Building, pictured left in 1962, as seen from behind a ragged barbed-wire fence that would become the Berlin Wall. It is pictured right in the present day. Before the wall’s construction in 1961, some 3.5 million people – 20 per cent of the population of Soviet-administered East Germany – had fled to the West 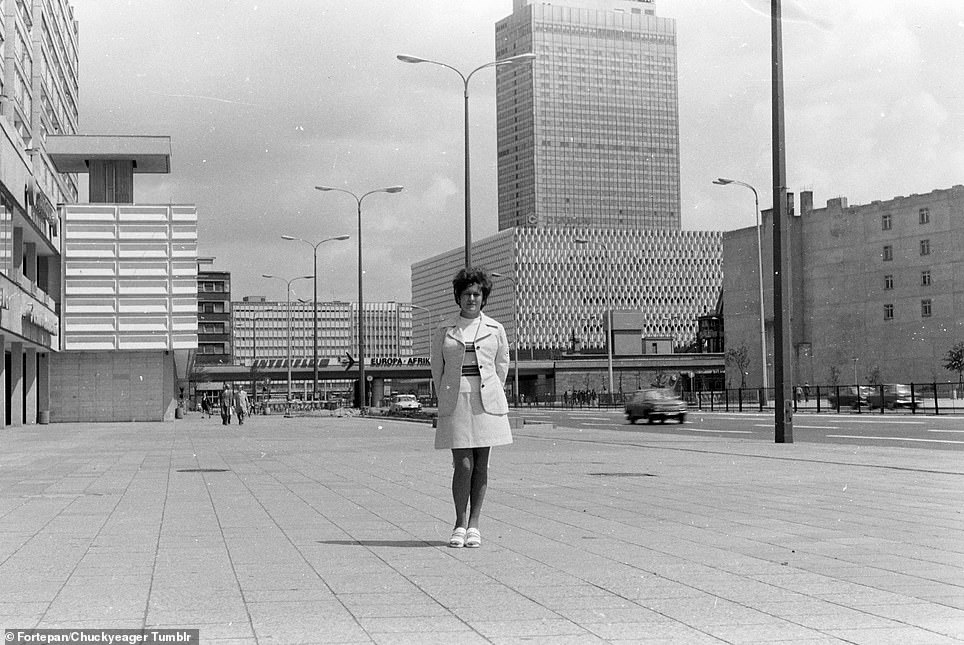 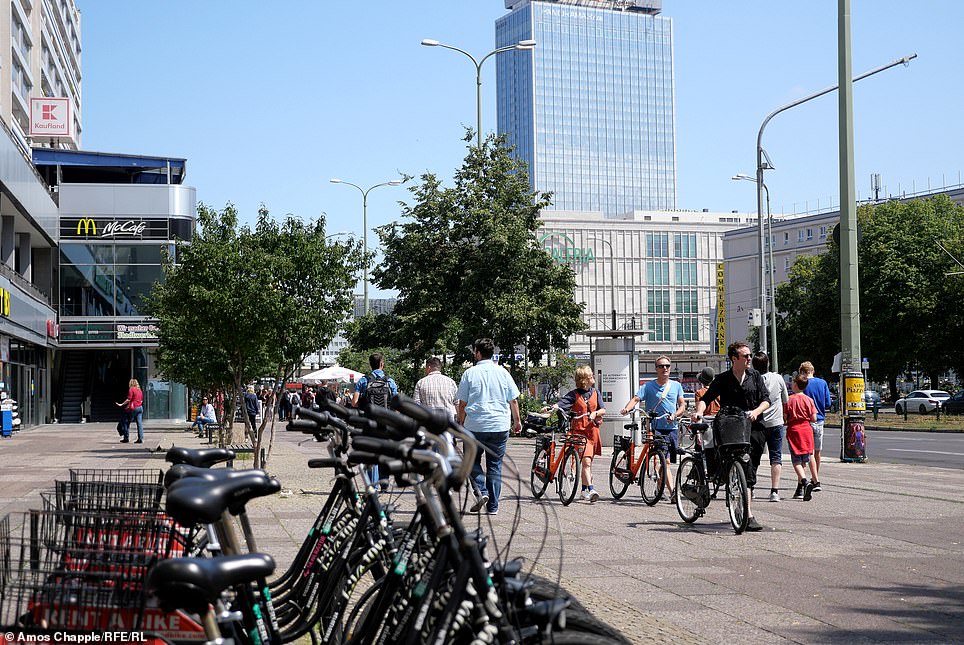 A woman poses in the centre of East Berlin in 1974, left. The eastern half of Berlin was ruled by a communist government from 1949 until 1990. Pictured right is the same scene in the present day, where many of the buildings still look the same 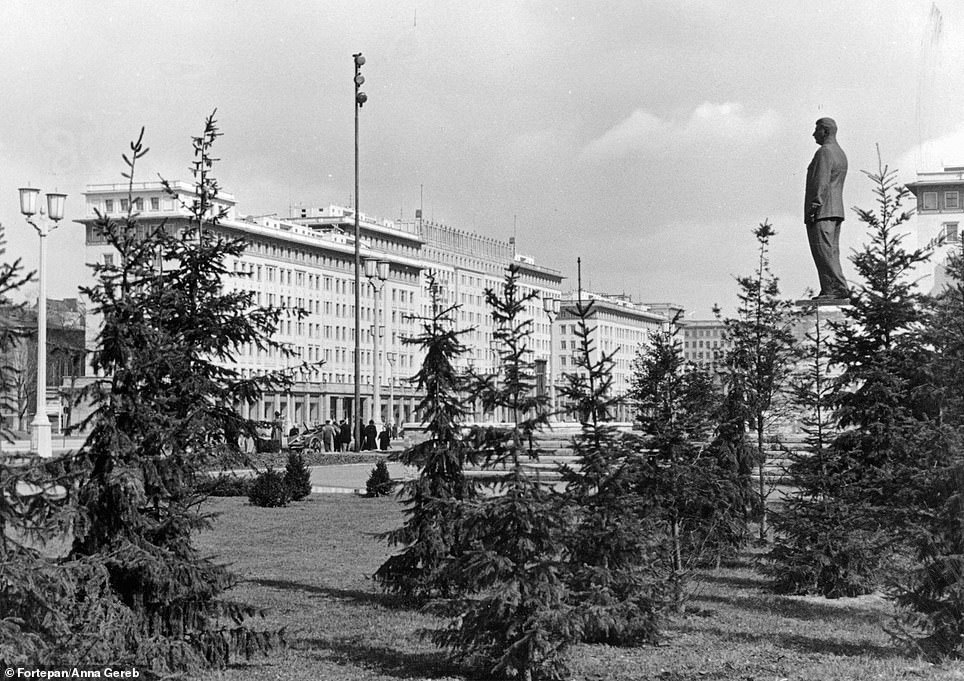 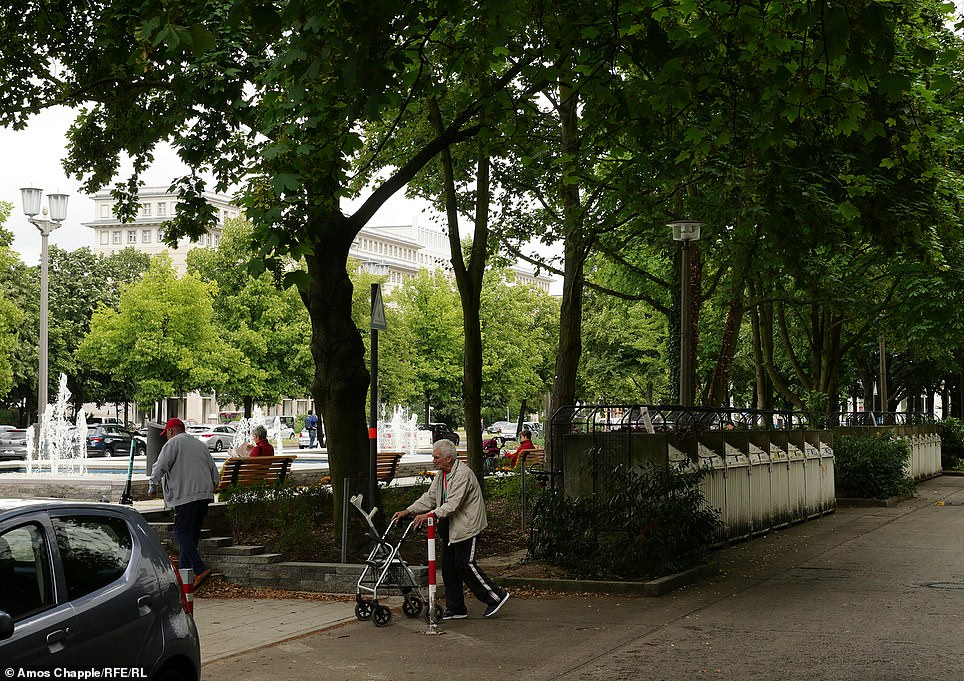 A five-metre-tall statue of Josef Stalin, pictured left, in 1958, on the street known at the time as Stalinallee. Writing on the Radio Free Europe/Radio Liberty site, Amos explains: ‘As part of the Soviet de-Stalinization campaign, the statue was removed and broken into pieces in a stealthy overnight operation by the communist authorities in 1961. A bronze ear of the Soviet dictator was secreted away and is now on display in a nearby cafe.’ Pictured right is the same spot today, which is now called Karl-Marx-Allee 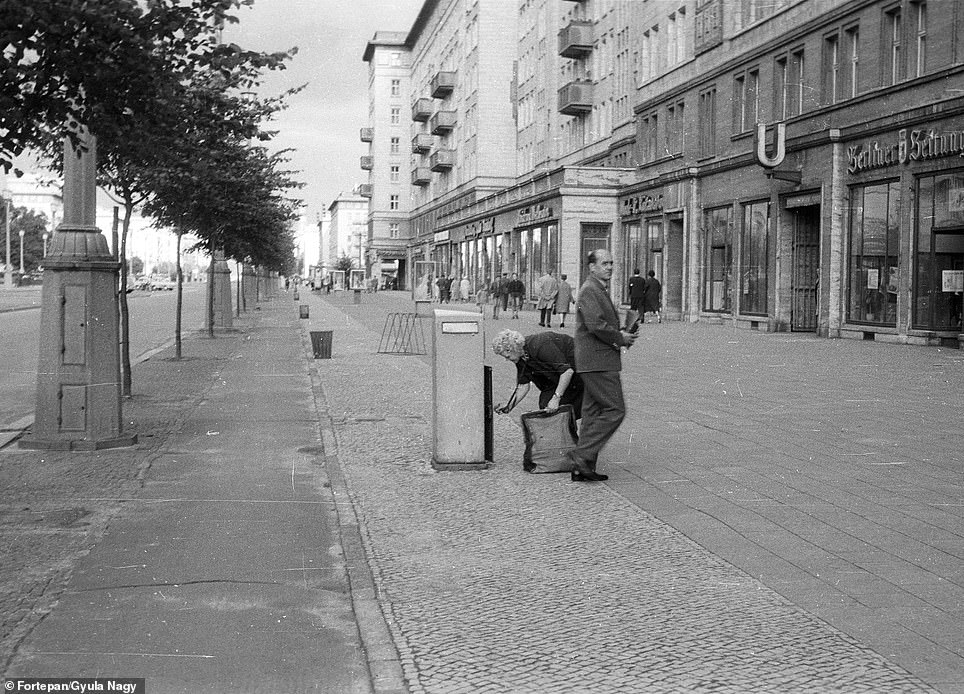 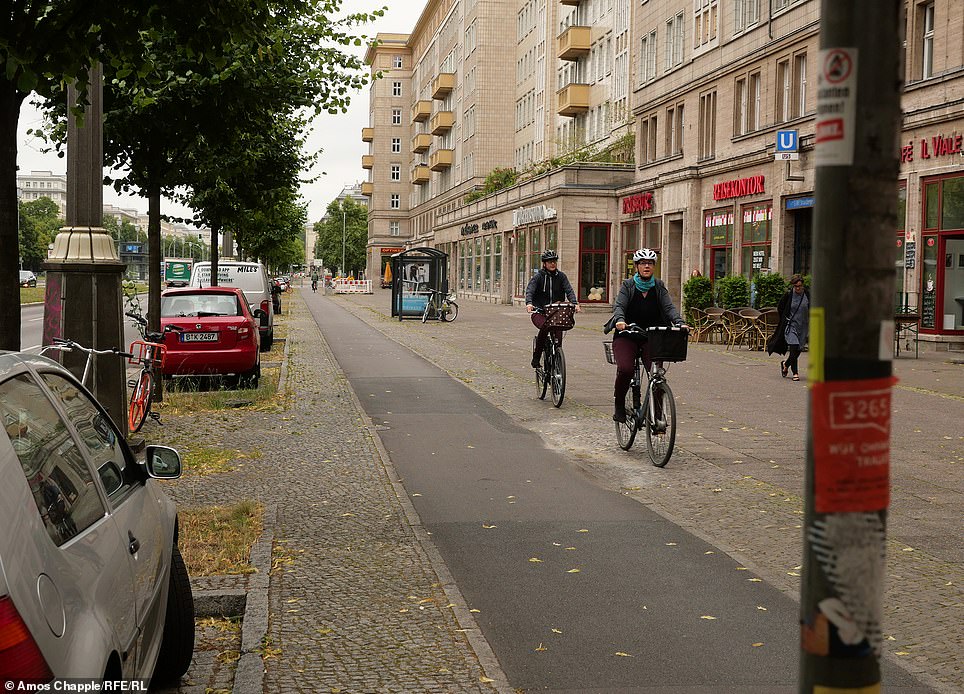 A postal worker on Karl-Marx-Allee in 1961, pictured left. Amos explains: ‘Public postboxes like this were a favourite stalking ground for the communist secret police, who furtively shot photographs at such sites to help them track who posted what, and to whom.’ Pictured right is the same street today – but without the postbox

Recognisable locations of the then and now shots include the likes of the Brandenburg Gate, the Reichstag Building and Alexanderplatz.

But trying to line up a shot in the exact same spot as a previous picture sometimes proved too difficult.

Amos told MailOnline Travel: ‘Only about half the photos I wanted to shoot ended up being possible. Many sites I located were blocked by trees or billboards or would require me to stand in the middle of a busy road so I’m kind of happy with everything I got.

‘It’s always a balance choosing the old photos – you have to have some kind of architectural anchor that will connect the scene today to the historic pic. But in some places in Berlin, the architecture has remained unchanged since the communist period so there’s no contrast that will wow people.

‘So I think the best old photos are those that give a good flavour of the time – people’s clothing style, or the look of the cars or a statue of Stalin – while still remaining obviously the exact same location. 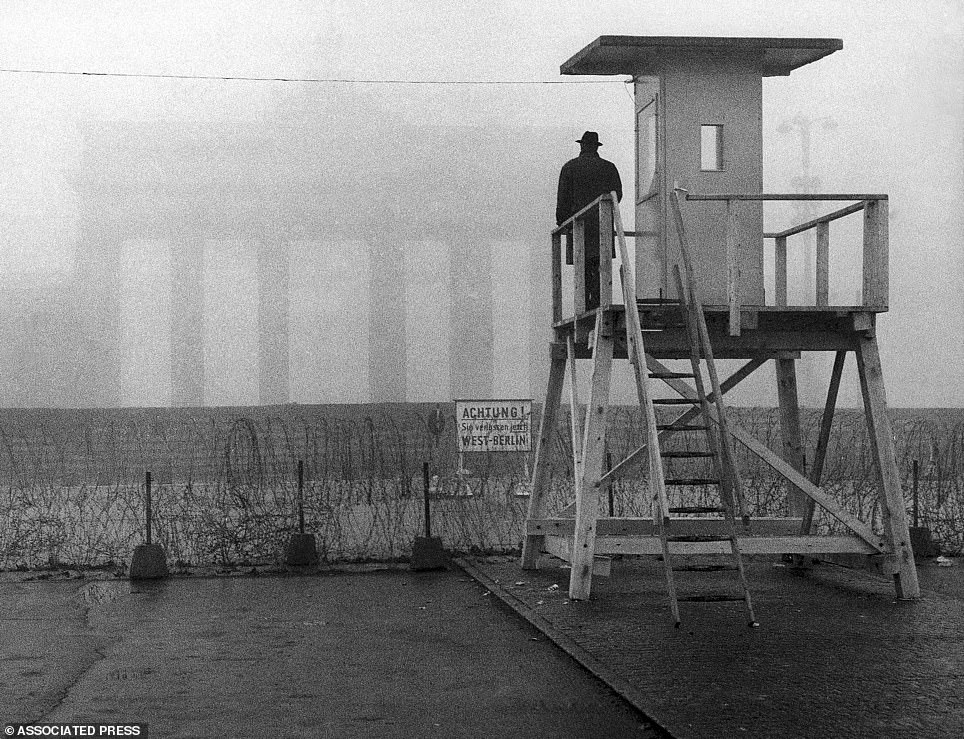 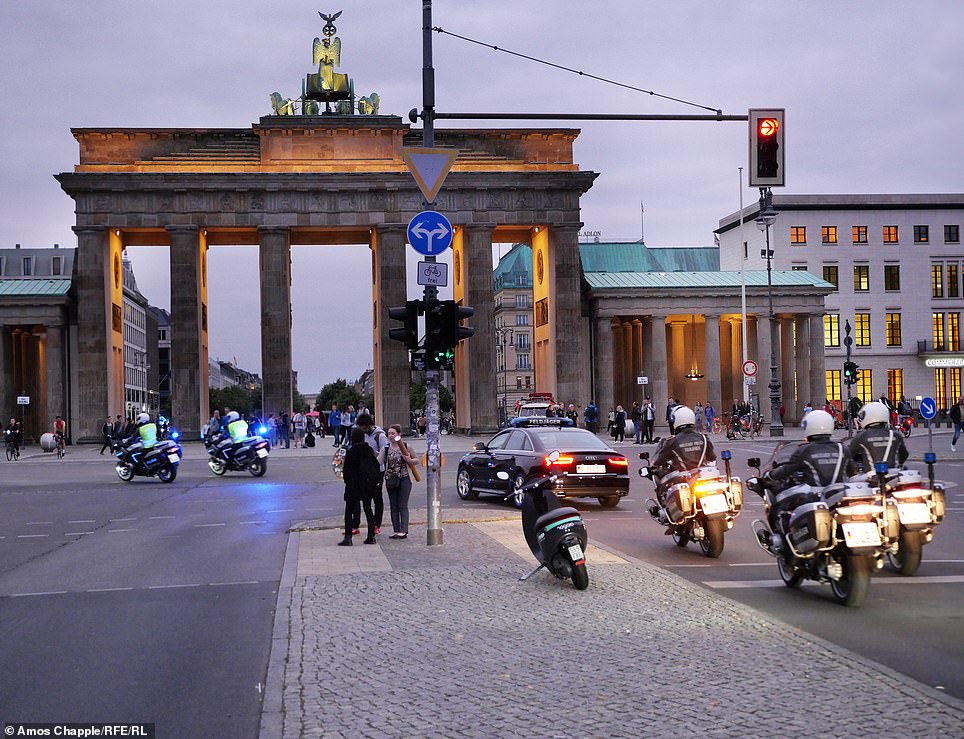 The Brandenburg Gate is shrouded in fog, left, as a man looks over the newly erected Berlin Wall to the eastern part of the divided city in November 1961. The wall was reinforced with barbed wire to stop people from climbing over and it ran for 91 miles, entirely cutting off West Berlin from the rest of East Germany. Pictured right is the Brandenburg Gate today, which is considered a symbol of a reunified Germany 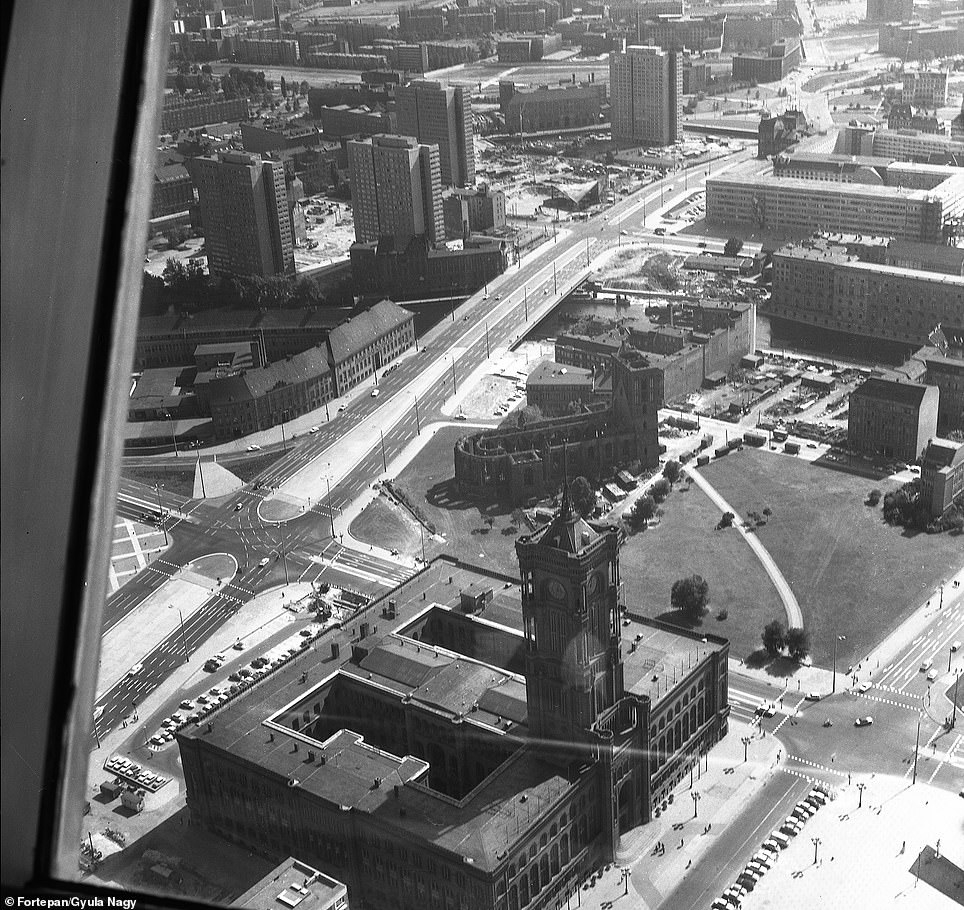 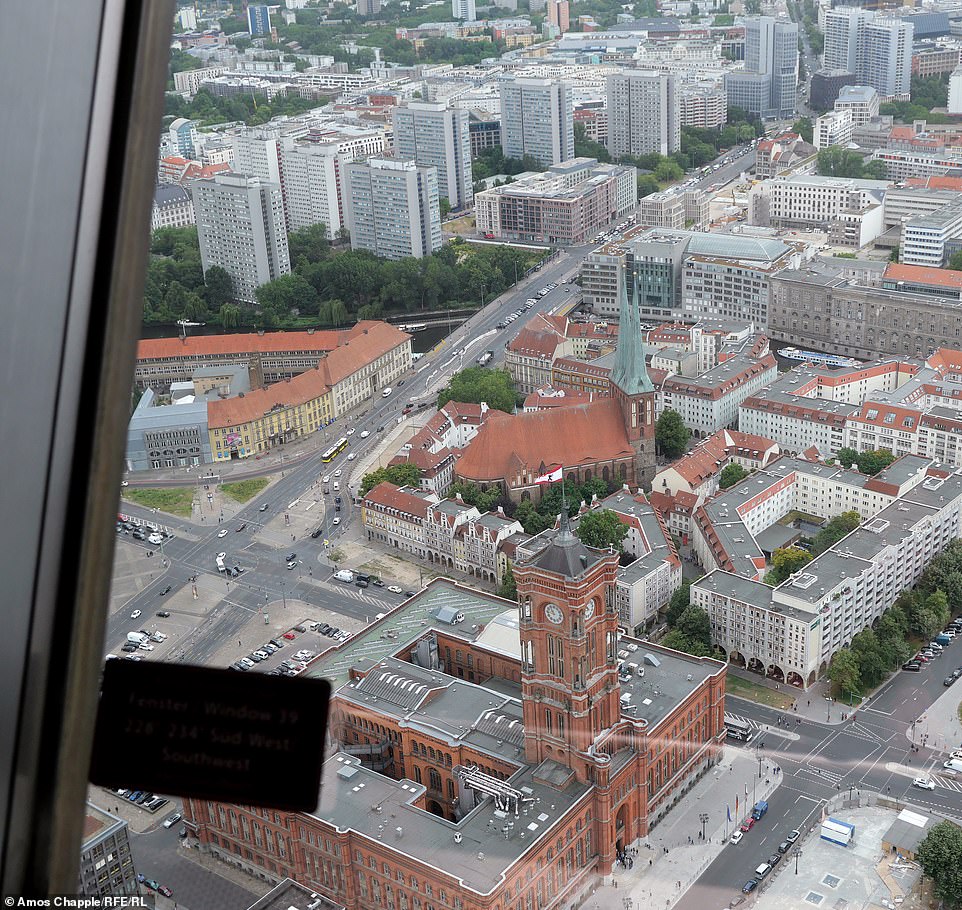 Pictured left is a view of the Rotes Rathaus (Red City Hall), seen from the viewing platform of East Berlin’s television tower in 1970. The view today is pictured right. Amos says this is his favourite shot as it shows ‘how much the city has been built up since its devastation by war’ 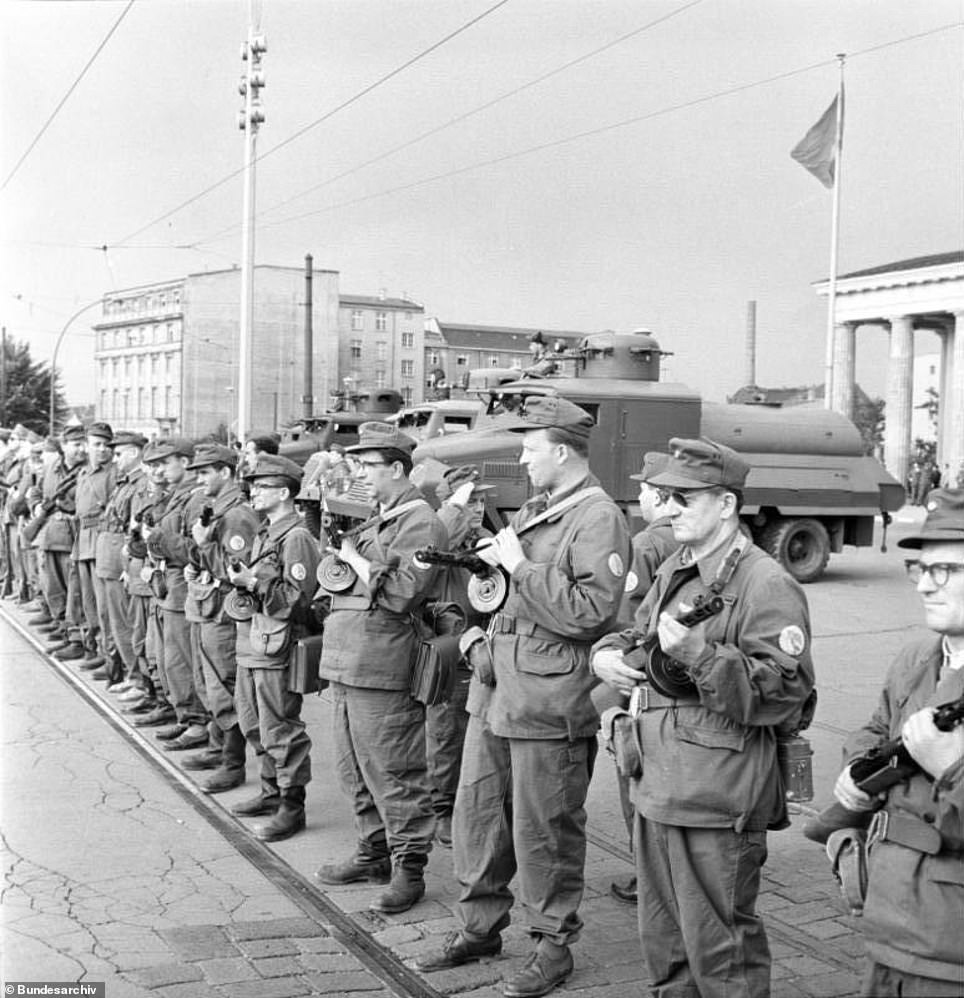 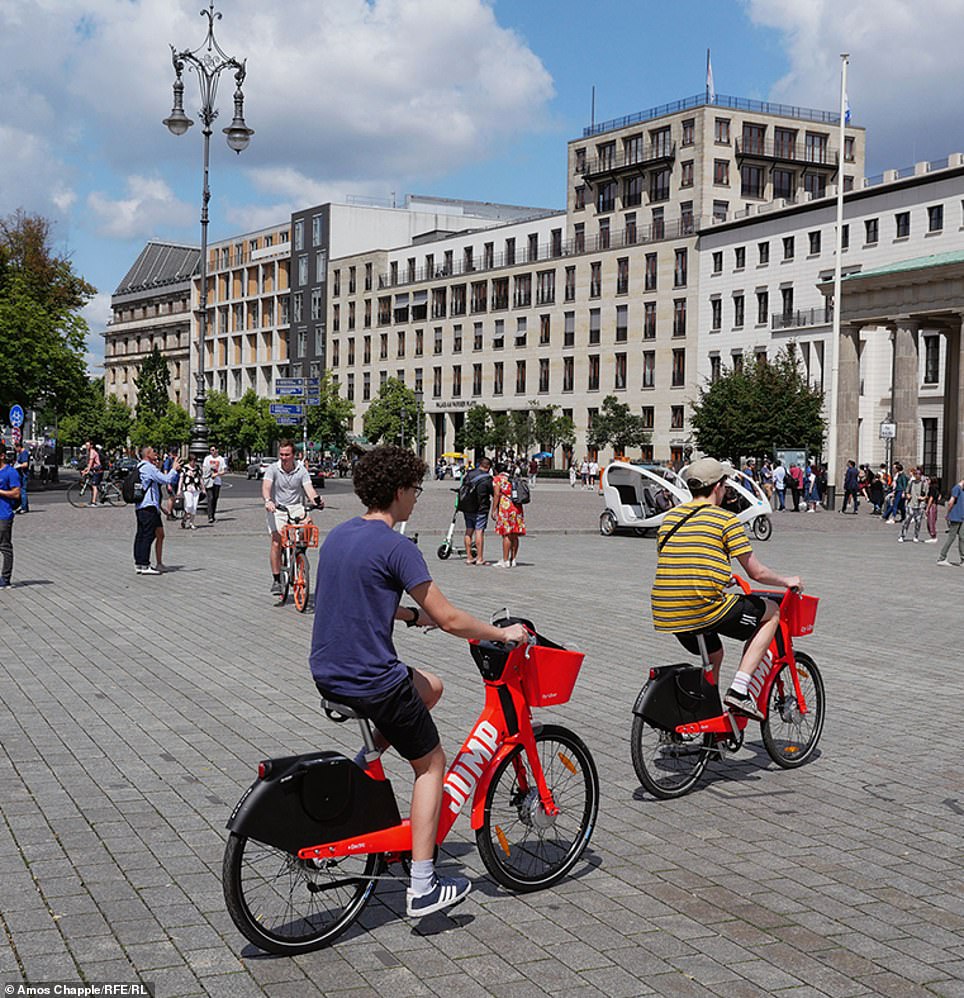 A gun-toting communist ‘combat group’, pictured left, seals off a boundary between East and West Berlin in preparation for the construction of the Berlin Wall in August 1961. Pictured right are pedestrians and cyclists walking and cycling over the exact same spot

‘The photo of the church taken from the television tower is, I think, the most interesting. To see how much the city has been built up since its devastation by war is amazing.

‘It gives you a sense of how the city’s elderly people must feel, looking at all these new buildings that the rest of us just pass by. They remember the rubble that once stood in its place, maybe sometimes the people they knew who were killed inside it.’

Looking at his completed project, Amos says it was ‘deeply educational’.

He added: ‘Looking at those old photos just reinforces my sense that government should never be allowed too much power. Whether the politics are right, left, fascist, communist or centrist – it doesn’t matter. Any government is made up of people – they’re just people. Even if they have good intentions, people make dumb mistakes and errors of judgement. I do, you do, we all do.

‘So when I look at that line of scruffy communist militants standing there thinking they will make the world better by stopping people’s freedom of movement, when I watch the Stasi videos of agents creeping through people’s apartments, looking for evidence they were thinking the wrong way… I think it’s terrifying, and it’s a lesson.’

The separation of Berlin began in 1945 when Germany was split into East and West Germany. 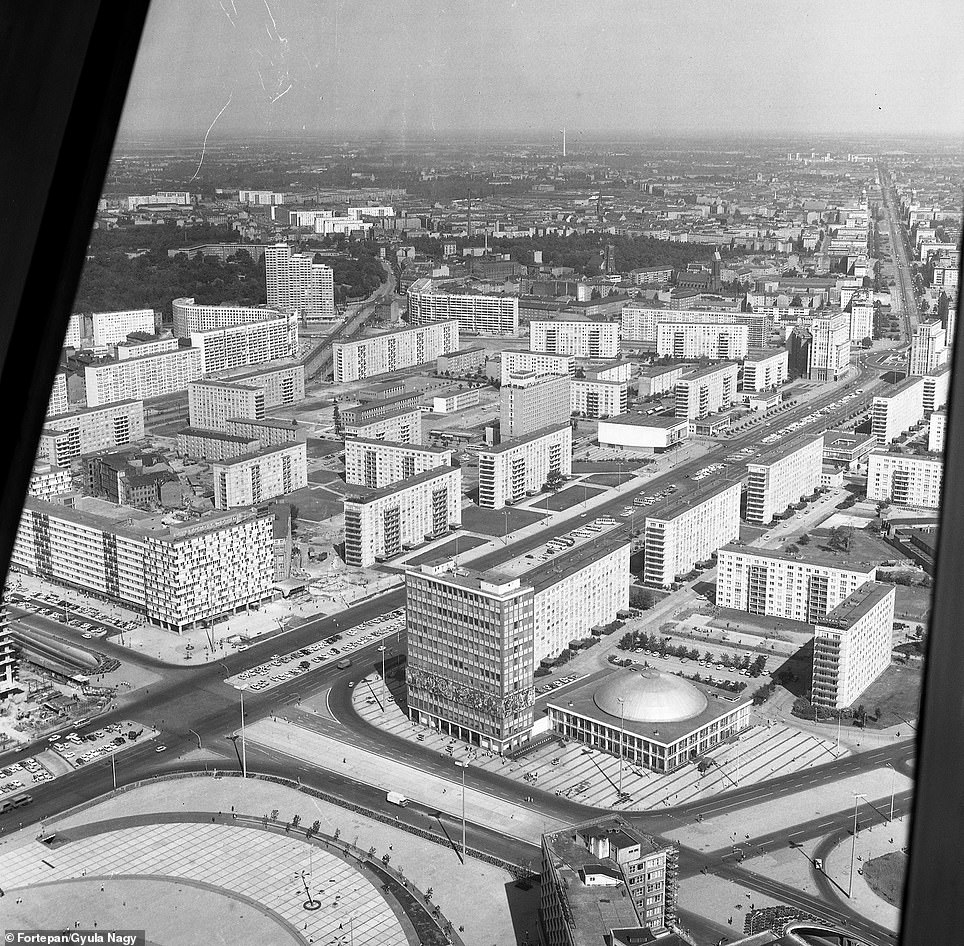 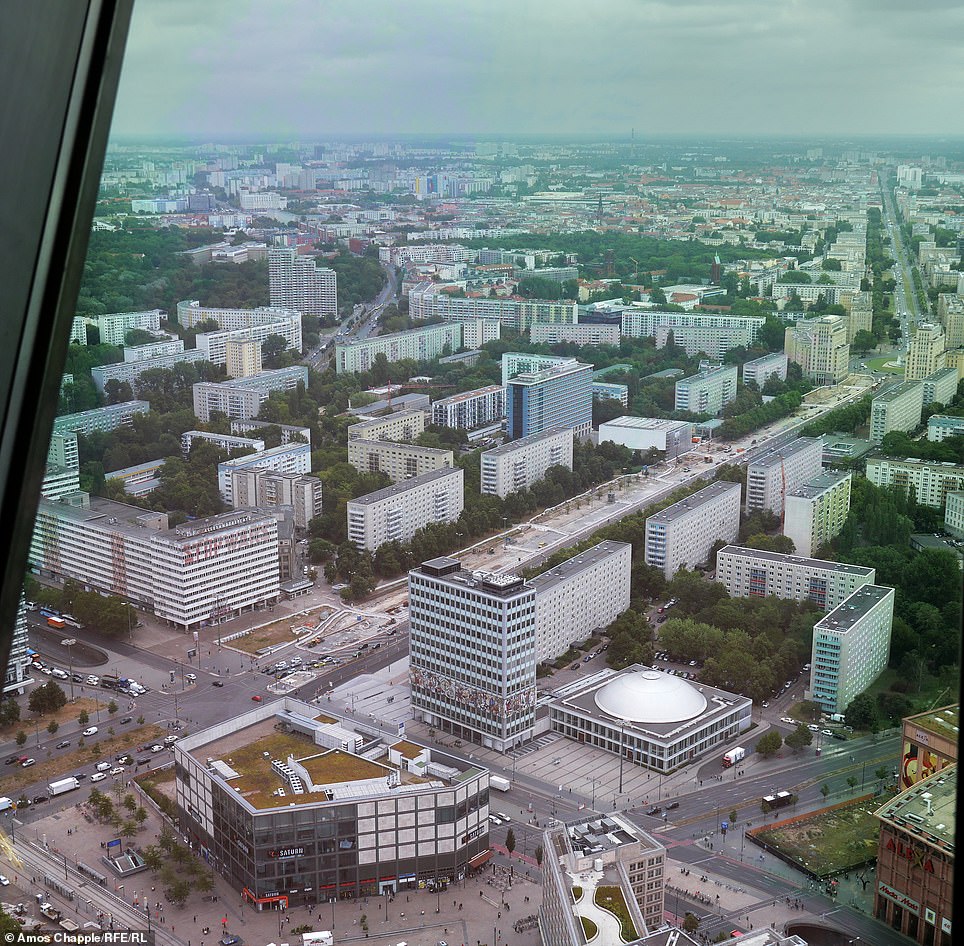 The view from Berlin’s television tower, looking east up Karl-Marx-Allee in 1970, pictured left. Amos says: ‘The area was almost completely rebuilt in the Stalinist architectural style after being pummeled into rubble by Allied bombing during World War II.’  Pictured right is an image taken from the exact same spot, showing that some of the Stalinist architecture still exists in the city 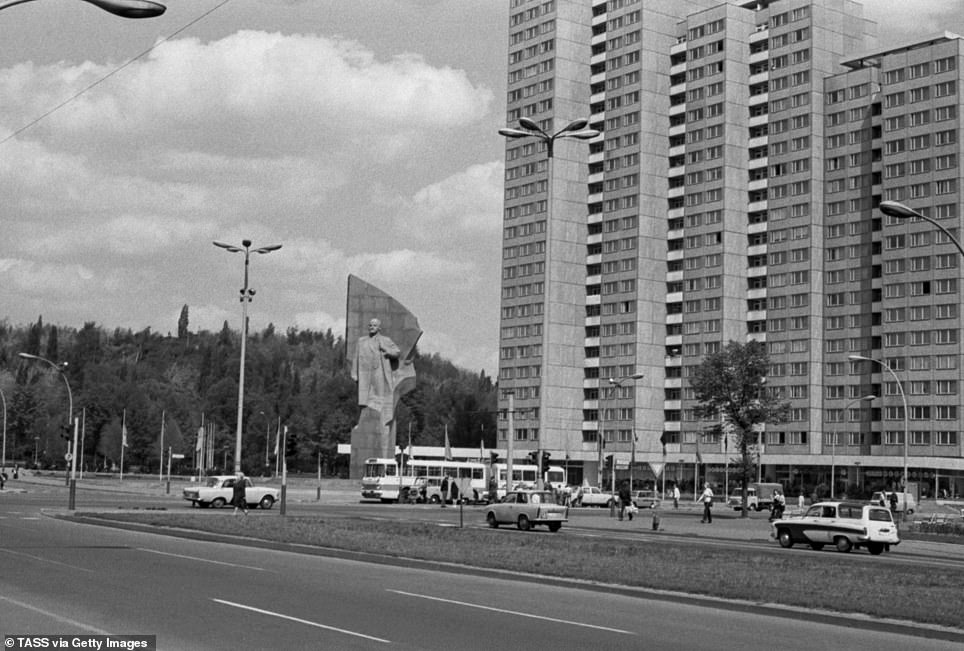 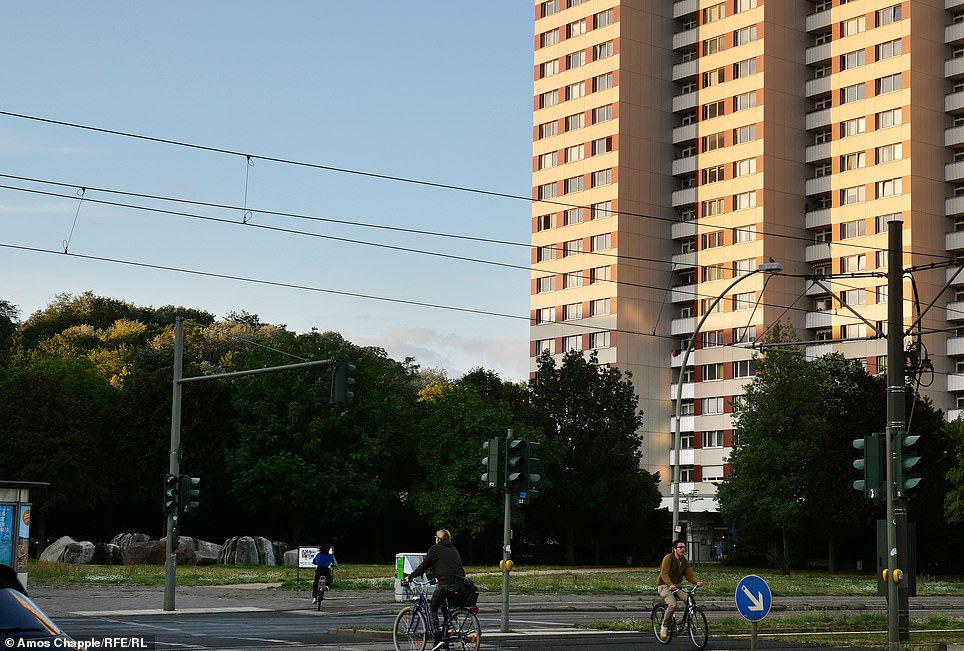 A 19-metre-tall statue of Bolshevik leader Vladimir Lenin on a square in East Berlin in 1973, pictured left. In 1991, the pink granite monument was torn down, cut into pieces, and buried in a forest on the city’s outskirts. The head of the statue was unearthed in 2015 and given a home in a Berlin museum. Pictured right is the same square today 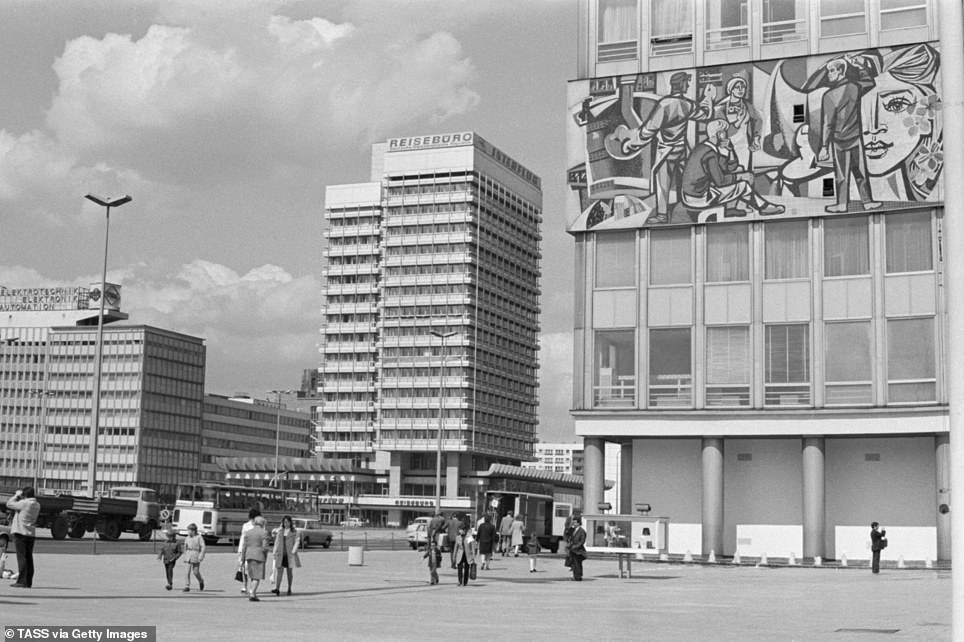 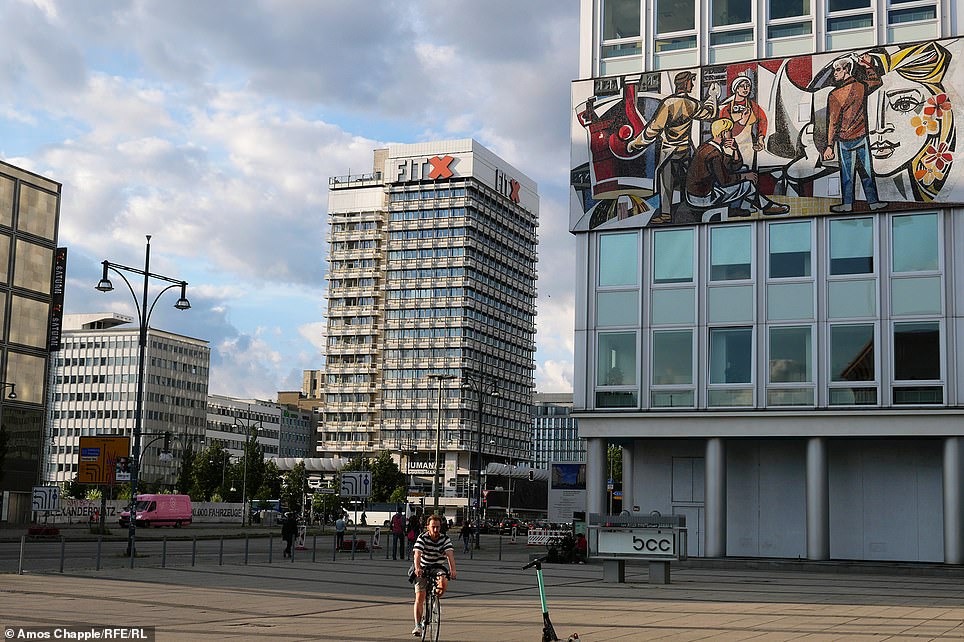 A mural adorns the side of a building in Alexanderplatz in 1974, pictured left. The square is named after Russian tsar Alexander I. In the present-day picture of the square, right, the exact same mural can still be seen on the wall 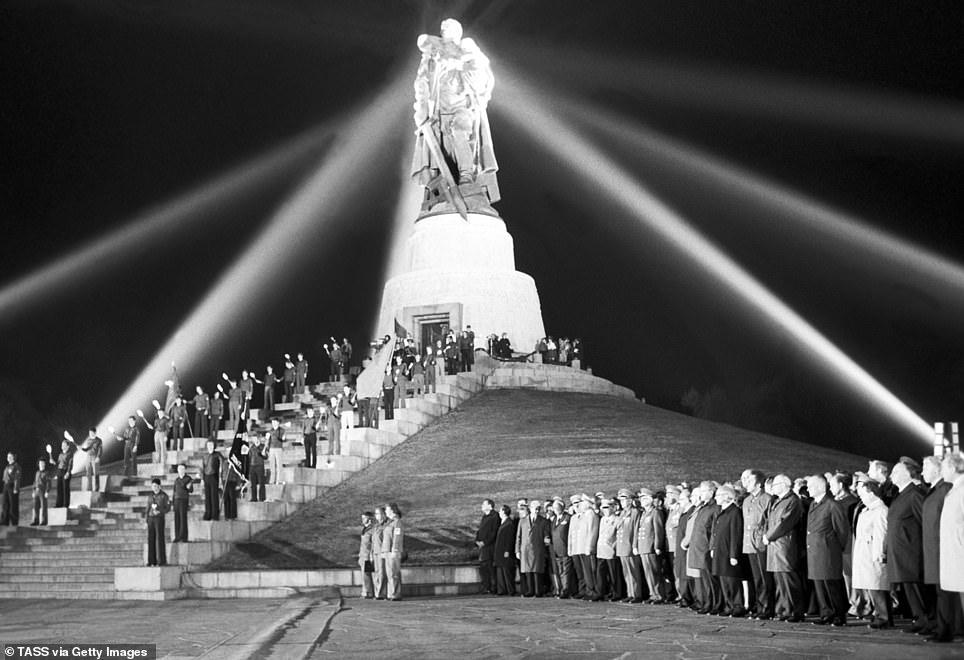 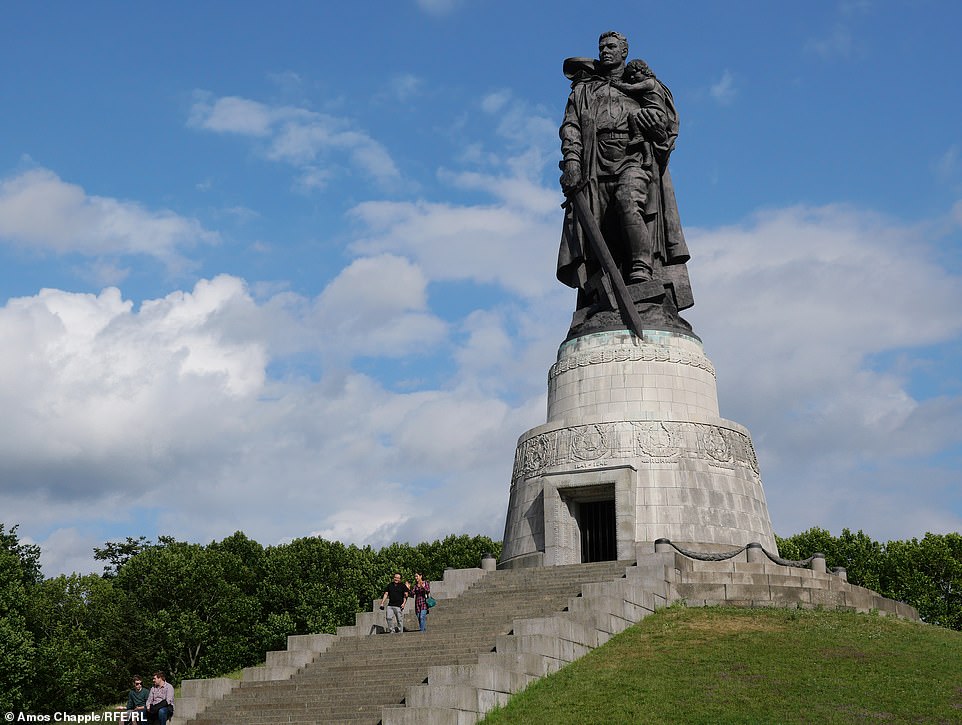 A youth rally dedicated to the 30th anniversary of the liberation from fascism at the Soviet War Memorial in Treptower Park in 1975 in East Berlin. The monument commemorates some of the 80,000 Soviet soldiers who died in the Battle of Berlin in 1945. Pictured right is the same monument in the present day

Berlin (located in the East) was also split with the west controlled by the US, the UK and France, and the east the Soviets.

At first thousands of people could move freely between the Soviet and Western controlled areas.

But the differences between the two areas eventually became stark, with West Berlin rapidly evolving into a showcase for the capitalist way of life.

However, in the east, the economic situation was not as prosperous with people living there suffering shortages of food and housing and suffering the restriction of individual freedoms.

In order to stop a drain of people from east to west, the communist government in East Berlin decided to erect a wall in 1961 – a physical barrier against defection.

The wall was reinforced with barbed wire to stop people from climbing over. It cut off West Berlin from the rest of East Germany entirely. 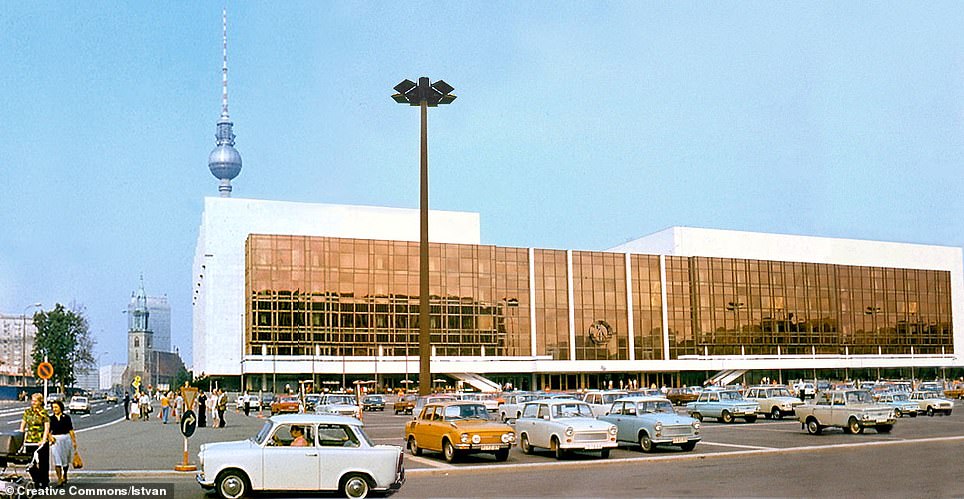 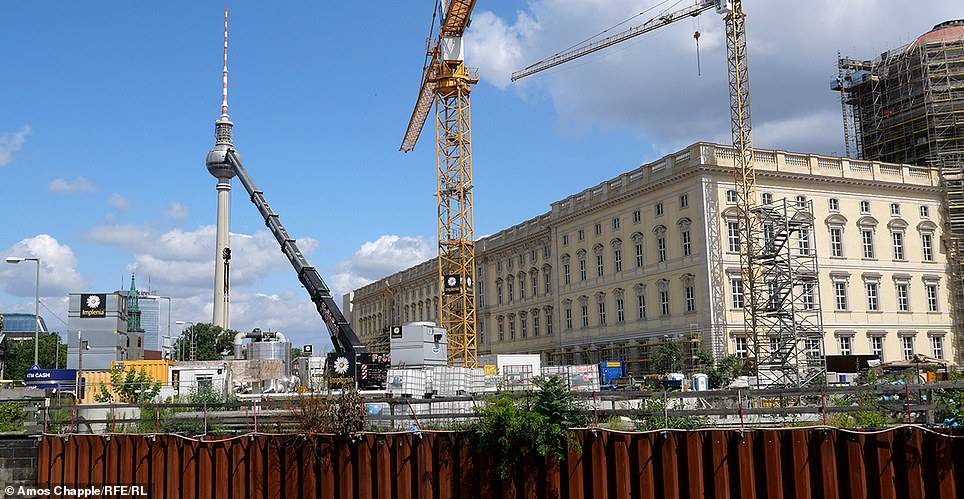 The Palace of the Republic in 1977, pictured left, with Berlin’s iconic television tower in the background. Amos writes: ‘The low-slung building once hosted the parliament of East Germany’s communist regime. In 2003, Germany’s Bundestag voted to demolish the structure.’ In the present day, construction work is ongoing to build a replica of a 15th-century building that once stood on the site. It is due to open later this year 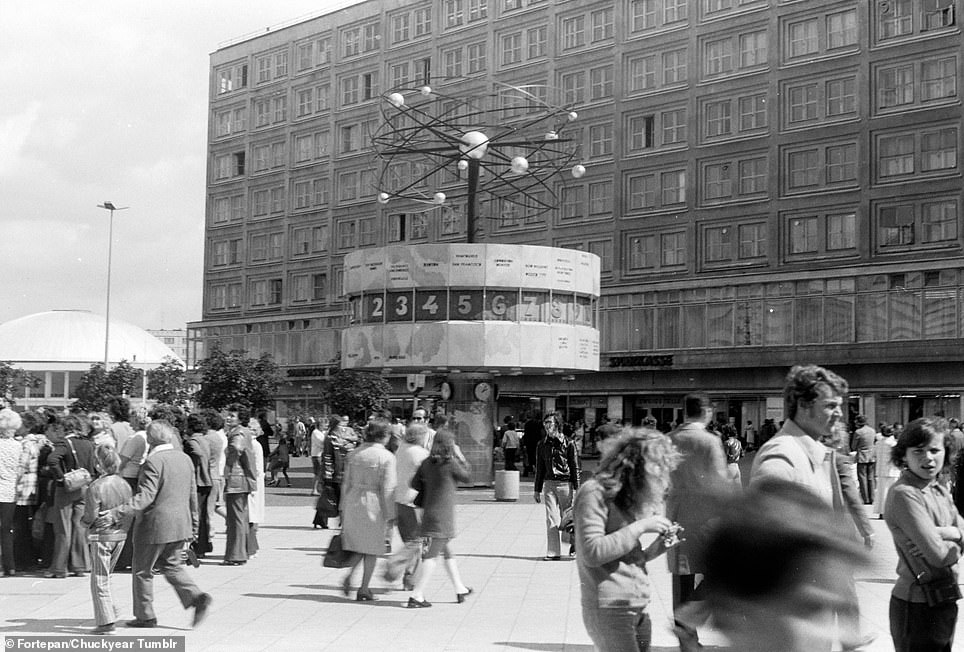 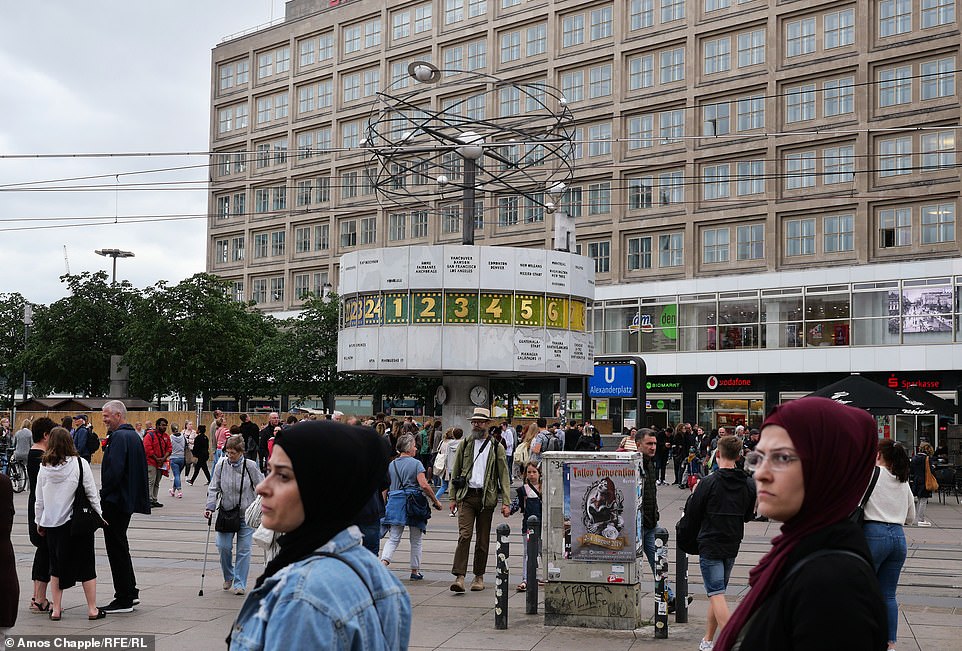 The World Clock on Alexanderplatz in 1974, pictured left. Amos says: ‘The clock, which displays the time in cities around the world, has become a famous meeting place since its completion in 1969. On November 4, 1989, a crowd of more than half a million people thronged the clock to demonstrate against East Germany’s communist regime. Five days later, the Berlin Wall fell.’ Pictured right is the clock today, which has been declared a historically and culturally significant monument by the German government 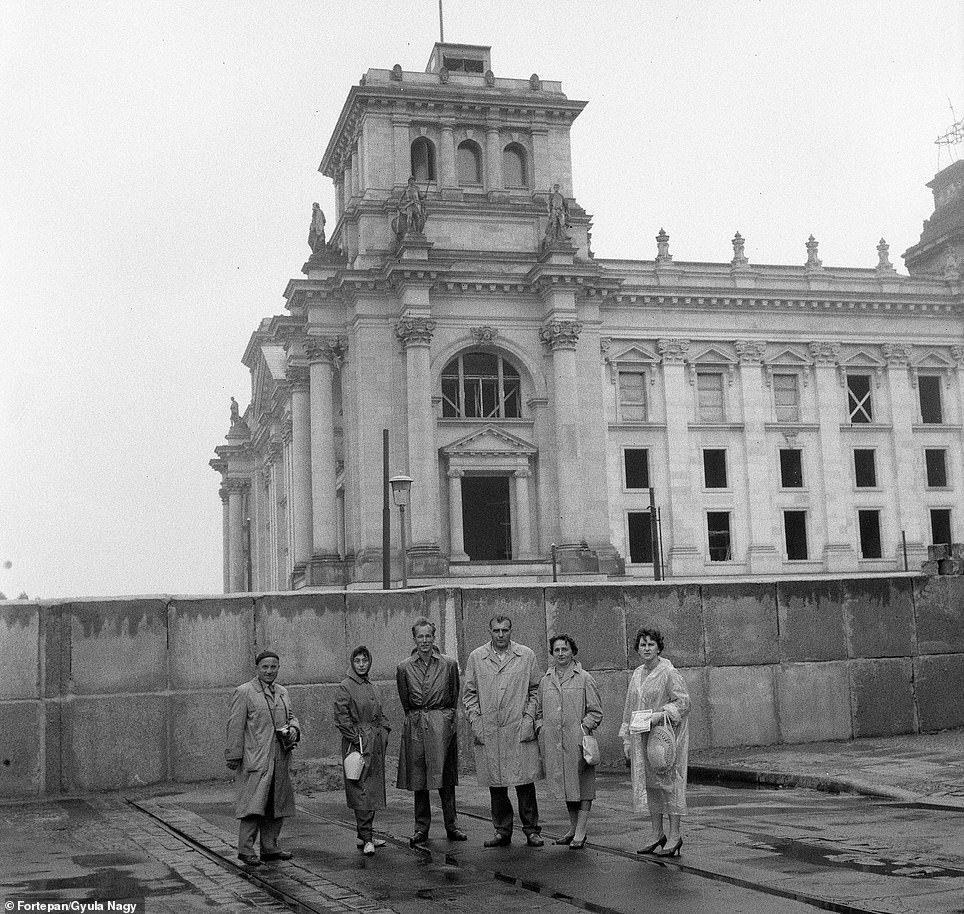 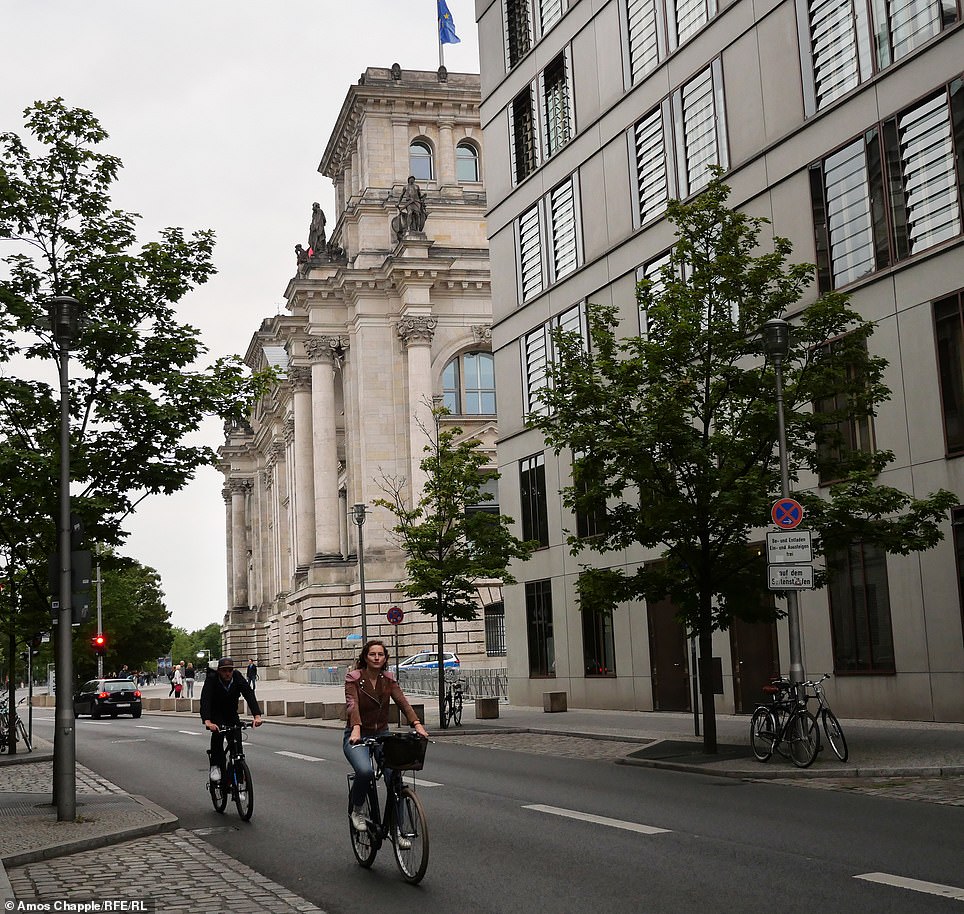 A group of rain-specked tourists pose next to the early construction of the Berlin Wall, a few meters east of the Reichstag, in 1962, pictured left. Amos writes: ‘The historic building, which housed the German parliament from 1894 to 1933, lay in ruins after World War II and was in the process of being rebuilt when this photo was taken.’ Pictured right are a couple of cyclists riding past the Reichstag Building today. Since 1999 it has been the home of the Bundestag – unified Germany’s federal parliament. It underwent a complete reconstruction in the 1990s, which was carried out by British architect Norman Foster. It’s now one of Germany’s most popular tourist attractions

Soldiers were ordered to patrol the wall to stop anybody from crossing and would shoot those attempting to escape.

It is believed at least 260 people died while trying to escape from east to west.

Some people were given permission to cross into West Berlin but would have to do so at checkpoints.

The most famous was Checkpoint Charlie, which is now a museum in the city.

The Berlin Wall remained in place from 1961 until 1989 when, after months of rising tension in East Germany, the Berlin Wall burst open on November 9.

Thousands rushed immediately to border crossings after a communist East German government leader told a news conference that travel to the West was to be allowed.

Huge numbers of East Berliners gathered at checkpoints demanding to be let across and the vastly outnumbered guards realised they had no choice but to allow them through.

East and West Germany were eventually reunited 11 months later in 1990. The demolition of the wall was completed in 1992.